Job satisfaction is an indispensable element for successful career development and improvement in radiology and other professional fields. Moreover, the staff tends to be more satisfied with some aspects of their job than the others. This research's primary objectives are to understand how job characteristics affect radiology specialists in Riyadh and determine the factors influencing job satisfaction among radiography technologists in Riyadh hospitals. The study was conducted among 40 participants. Questionnaires were used to collect data from the participants electronically. The questionnaire consisted of two sections. Section A comprised the professional profile and qualification composed of seven items, while Section B was concerned with job satisfaction items. It consisted of thirty-two job satisfaction statements measured on a five-point Likert scale. The results showed a high level of job satisfaction. Almost 80% of participants were satisfied with their current jobs. Some participants (20%) were not happy with their current salary level. Even though the radiographers appeared more satisfied and attained high overall satisfaction scores, they expressed deep concerns about their payment. They strongly emphasized the need for a strong relationship with other coworkers.

The quality of radiographic imaging services depends on the hiring of high-quality radiographic technologists to provide highquality services [1]. However, their performance and productivity depend on their working environment and satisfaction. The major challenge today is to provide an environment where, regardless of personal background, all radiologic technologists have the opportunity to maximize their intellectual talents, to grow professionally, to have their work respected, and to be members of the health care community [2,3]. Distinguishing that job satisfaction and retention are significant and meeting radiologic technologists' demand is imperative, influencing job satisfaction [4]. According to Maslow's theory, people's needs range from a basic to a high level. These needs are present within every human being in a hierarchy: physiological, safety and security, social, status, and self-actualization needs. Failure to satisfy one need may have an impact on the next level of need. Low order needs take priority before the higher-order needs are activated so that needs are met in sequence. According to this theory, people who struggle to survive are less concerned about demands on the higher levels than people who have the time and energy to be aware of higher-level needs.

Several studies have been conducted in the literature to assess medical practitioners' job satisfaction and other allied health professionals worldwide [5]. Although studies have been undertaken regarding medical practitioners and other health professionals, radiographers have not received considerable attention in this respect [1,6]. Furthermore, to improve health care, it is paramount to understand what motivates them and how they are satisfied by the organization, and other contextual variables. Job satisfaction is also an essential part of ensuring quality care, as dissatisfied healthcare providers are likely to give low quality and less efficient care. According to Tzeng et al. [7], there is evidence of a positive correlation between professional satisfaction and patient satisfaction [2].

Job satisfaction can be achieved when an employee becomes one with the organization, performs to the best of their ability, and shows commitment; moreover, job satisfaction and performance are positively influenced by rewards. Various factors affecting job satisfaction, such as the need for management to create an environment that encourages employee involvement and manages stress in the workplace. It is useful to distinguish between morale and attitude and their relationship to job satisfaction [8]. Enthusiasm can be defined as the extent to which an individual's needs are satisfied and how they perceive that satisfaction as stemming from the total job. Attitude can be defined as an evaluation that predisposes a person to act in a certain way and includes cognitive, affective, and behavioral components.

There is a low level of employee job satisfaction in most South African companies, resulting in a lack of commitment to performance and the achievement of organizational goals. Therefore, managers must pay special attention to employees' attitudes as job satisfaction can decline more quickly than it develops. Managers need to be proactive in improving and maintaining employees' life satisfaction and satisfaction in the work environment as job satisfaction is part of life satisfaction, meaning an individual's life outside work may influence one's feelings on the job [9,10]. In addition to that, several publications have demonstrated how radiographer roles improve patient pathways and deliver increased capacity in developed countries. However, in Saudi Arabia, the role of radiography technologist or specialist remains the same. This may affect job satisfaction and career development. This research's objective is to understand how job characteristics affect radiology specialists in Riyadh, Saudi Arabia.

This is a prospective cross-sectional survey used to determine the different factors affecting job satisfaction among radiography technologists in Riyadh, Saudi Arabia, to detect areas that require improvements in the various hospitals in Riyadh. The study was conducted at Riyadh city Hospitals. A total of 40 participants was drawn from the hospital. The distribution and collection of all questionnaires were electronically submitted and collected.

This study's study population consisted of all radiography technologists working at Riyadh city hospitals at different imaging modalities. Radiographers working at the radiotherapy and nuclear medicine department were excluded. Thus the inclusion criteria were all radiography technologists at Riyadh city hospitals who were on the job at the time of the study and willing to participate. For this research, a reasonable fund is required to design an online questionnaire as well as other materials such as statistical software.

The questionnaire was the research instrument adopted for collecting data. This study was used for this study as data was collected from the radiographers working at hospitals in Riyadh city. Acceptance to participate in the study after explaining the study was considered consent, and participation was voluntary. Participants were allowed to withdraw from the study at any point without explanation. Confidentiality and anonymity were ensured throughout the study's execution as participants were not required to disclose personal information on the questionnaire. Provisions were made to have participants' concerns relating to the survey addressed and misconceptions corrected. Participants were informed that their participation was voluntary and that they could withdraw from the study at any time if they wished to do so. The structured questionnaire consists of closed-ended questions. Each question will contain a five-point Likert scale, and according to them, those are rated. This research survey method will be selected because it is widespread and is easy to analyze and interpret questions based upon indicators. A questionnaire consists of a set of questions presented to the respondent for getting their responses. The questionnaire prepared was short and to the point. In this survey, a questionnaire was organized within the following parameters: Organizational, work environmental, and personal factors. The questionnaire consisted of two sections. Section A comprised the professional profile and qualification composed of seven items, while Section B was concerned with job satisfaction items. It consisted of thirty-two job satisfaction statements measured on a five-point Likert scale 'strongly agree' to 'strongly disagree.'

The questionnaires were distributed to radiology specialists and required to complete the questionnaire electronically using survey monkey. At the beginning of each questionnaire, an overview was provided. Survey Monkey is a useful online tool for creating and administering surveys and managing and analyzing data. To use the service, I first started a survey monkey account. While free versions are available (with a ten questions limit), paid accounts are available for more extensive surveys. The Web Link was sent via email to all participants.

In this study, 40% of participants are senior radiography technologists, 30% are junior technologists and technicians. This indicates that this research group is homogeneous, and the results reflect all the technologist level at the radiography department. All the participants were affiliated with a radiologic department either as a clinical technologist or administrators. 80 % were senior technologists, and radiographic technologist indicated that they were involved in patient imaging in different imaging modalities, and 10% were quality control technologist and had an administrative role in the department. Regarding the qualifications, the study showed that 21% of the respondent were P.hD holders in radiology, and 36 % were M.Sc holders. This indicates most of the staff were highly skilled workers, thus providing up-to-date clinical imaging services. 13 % of the staff were technicians. In recent years, most technicians entered bridging programs to obtain a B.Sc in medical imaging sciences to improve their knowledge in the medical imaging field. 93% of the participant got their higher qualifications in Saudi Arabia, and the rest have received their qualifications in the USA, Europe, and Australia. Figure 1 shows the years of experience in medical imaging. All participants are distributed equally for the range used in this study (1-5, 6-10, 11- 15, above 16 years). Regarding the working hours per week, most participants have positive responses and satisfied to a certain degree with their current scheduling, as illustrated in Figure 2. 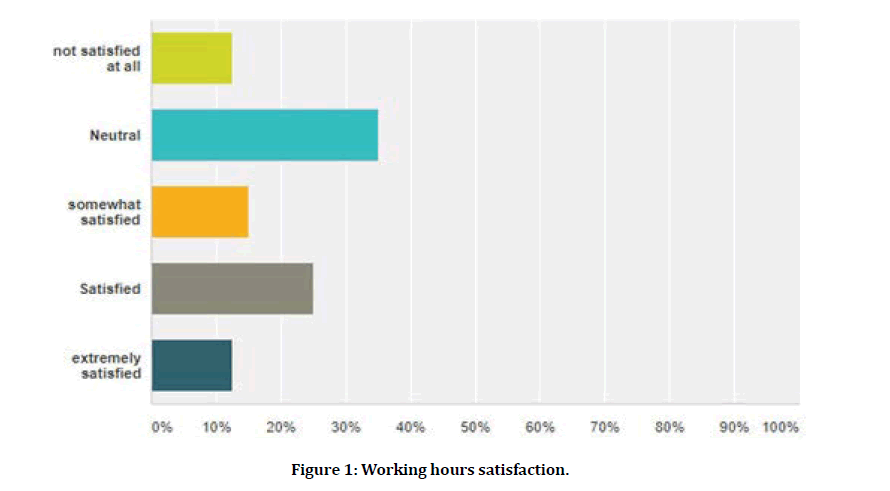 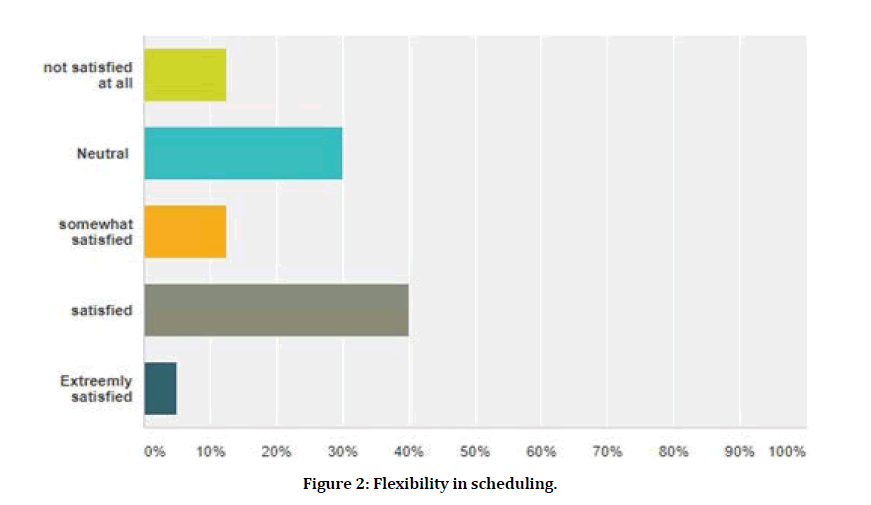 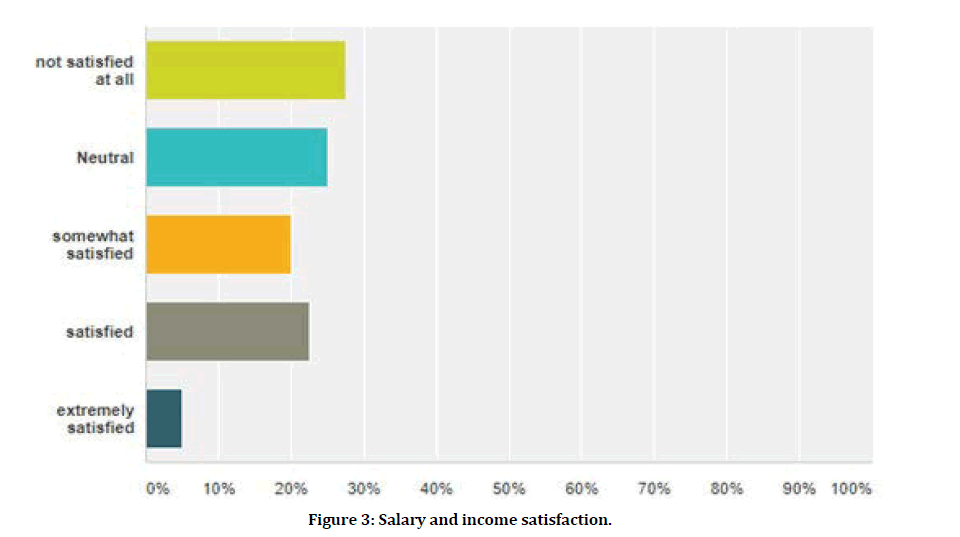 Job security is one of the most critical factors in any field of work (Figure 4). People always need to feel safe in their jobs, according to Maslow's theory. It was also observed that radiographers working part-time were not as satisfied as those working full-time, probably because they had limited benefits, low job security, and were excluded from routine promotions [13]. 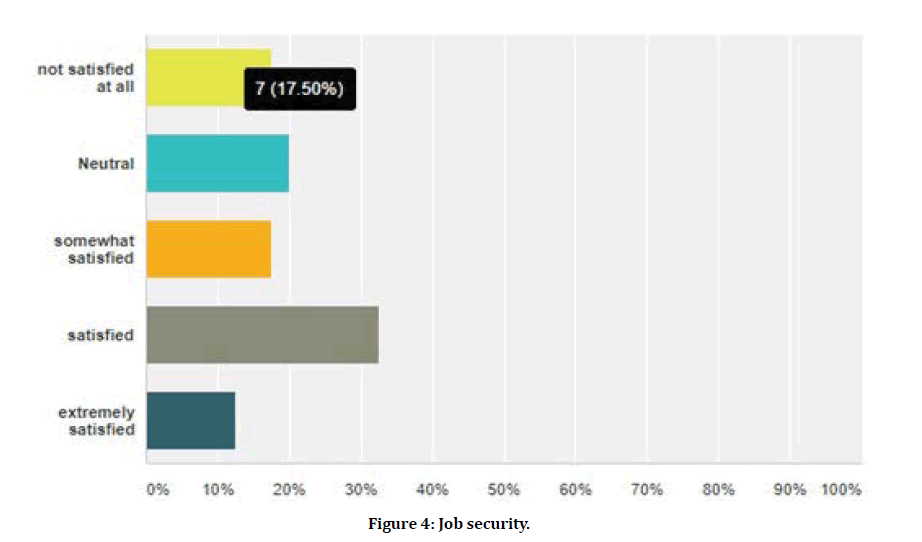 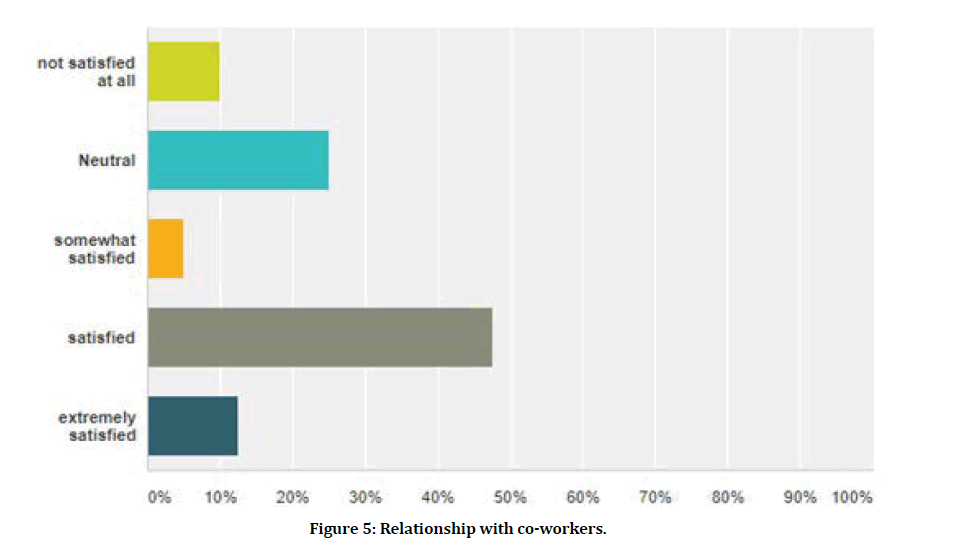 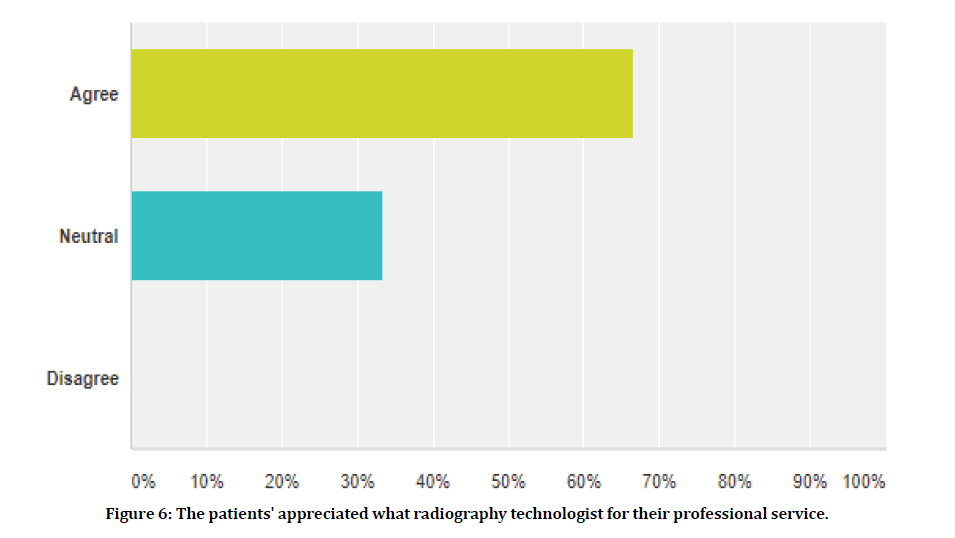 Figure 6: The patients' appreciated what radiography technologist for their professional service.

Figures 7 and 8 illustrate radiologic satisfaction with their relationship with patients and their co patients during the imaging process. The result showed that the participants were satisfied with the relationship with patients and the level of patient care. Only 7% believe that the patients do not cooperate reasonably during the imaging procedure. Figure 9 showed that staff is satisfied with current radiation safety measures at their department. This is an essential issue since inadequate radiation protection measures usually increase the staff's anxiety and decrease satisfaction levels. 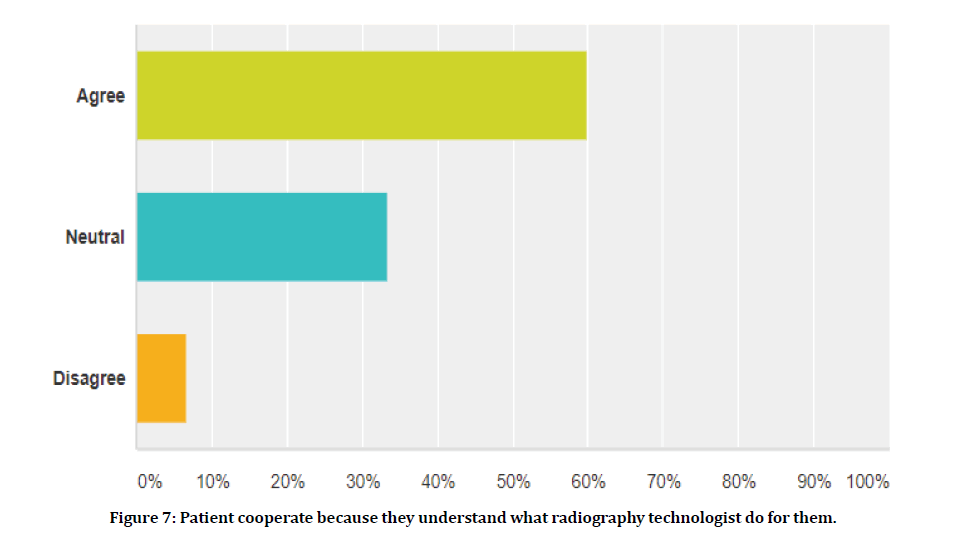 Figure 7: Patient cooperate because they understand what radiography technologist do for them. 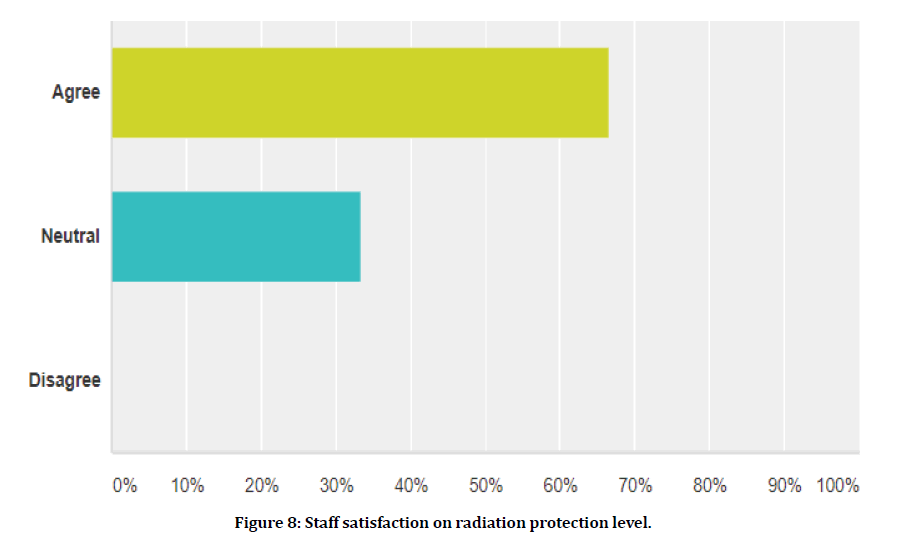 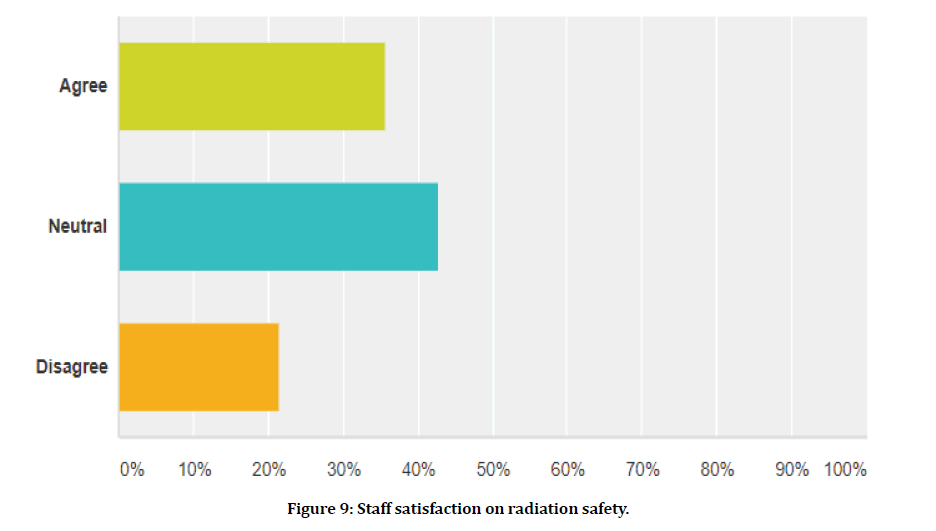 Figures 10 and 11 showed that radiography technologists are satisfied with their current careers and even advise their dependents and others to study radiology. This illustrates the high level of satisfaction for this profession. 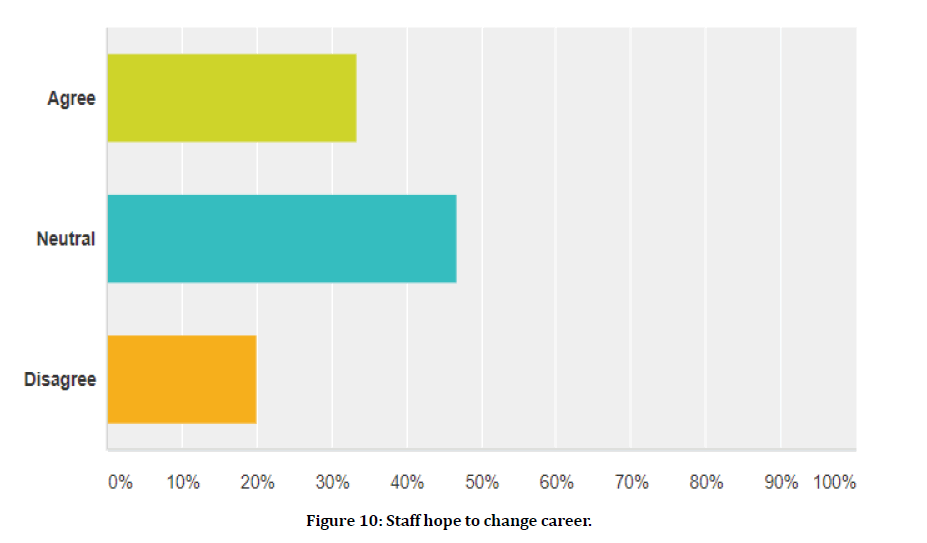 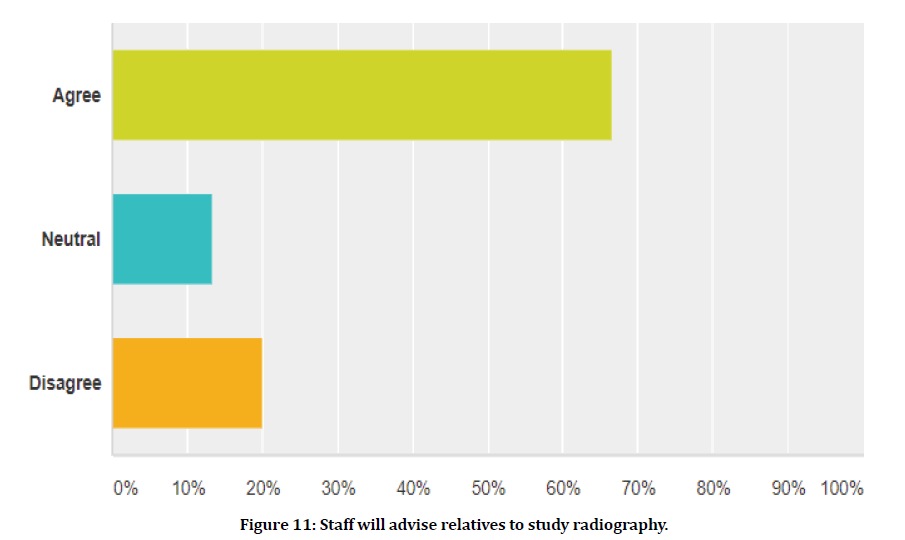 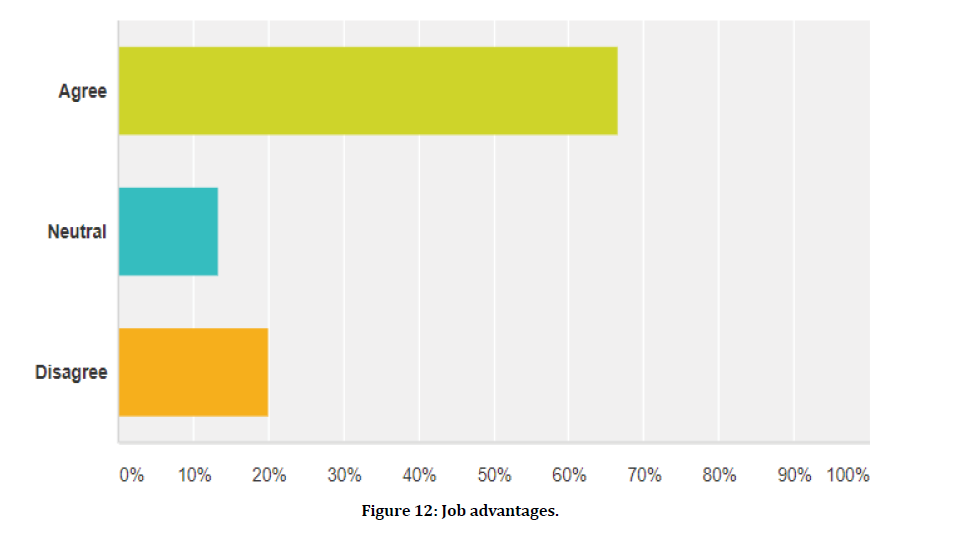 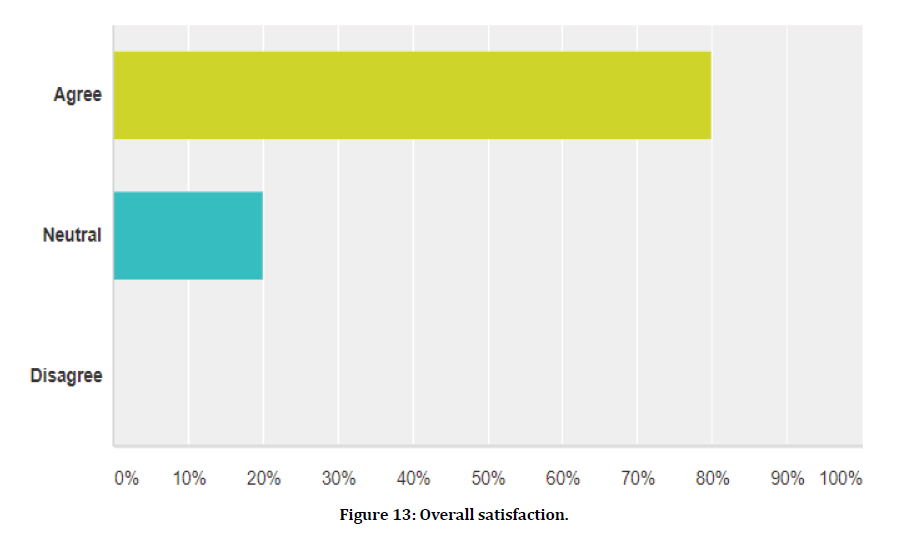 In general, previous studies indicate that needs fulfillment leads to overall job satisfaction. Unless individuals feel that their needs are met in a manner that provides them the opportunity to reach their highest potential, they will experience varying levels of dissatisfaction. Results of this study may provide a resource to improve the level of satisfaction for all radiography staff.

This study examined the relationship between job satisfactions for radiography technologist with working conditions in the light of the current working environment in Riyadh, Saudi Arabia. In general, the radiography technologist has a high level of satisfaction regarding their working conditions, salaries, and other factors. This study showed that salary was the primary cause of dissatisfaction. Even though the radiographers appeared more satisfied and attained high overall satisfaction scores, they expressed deep concerns about their payment. They strongly emphasized the need for a strong relationship with other co-workers.