Evaluation of the Cause and Pattern of Teeth Extraction in the College of Dentistry, Mustansiriyah University

The aim of this study was to find the reasons for teeth extraction in patients attending department of Oral Surgery in college of dentistry and cross relation of factors such as age, gender, etc. Material and Methods: This study was carried out in oral surgery department of college of dentistry, Mustansiriyah University, Baghdad- Iraq. The data collected from the case sheets of under graduate student of college of dentistry, fourth and fifth stages. Results: There were 1964 patients had 2789 extracted teeth occupied in this study with mean age (39.96) years, 1151 patients were males and 813 of them were females. 1995 from teeth as retained roots (71.5%). (58.6%) were maxillary teeth and (41.4%) were mandibular teeth. There were 1099 (39.4%) out of 2789 teeth diagnosed with chronic periapical lesion and 896 teeth with necrotic pulps (32.13%). Conclusion: Caries and its progression until reach necrosis and periapical lesions and formation of retained roots that unable to treat by other ways except extraction was the prevalent cause of extraction in this study.

The aim of this study was to find the reasons for teeth extraction in patients attending department of Oral Surgery in college of dentistry and cross relation of factors such as age, gender, systemic disease, position of tooth in dental jaw, diagnosis and chief complaint.

Table 1: Distributions of patients according to age and gender.

Table 2: Number of patient according to chief complaint.

There were 1099 (39.4%) out of 2789 teeth diagnosed with chronic periapical lesion, 896 teeth with necrotic pulps (32.13%), 364 teeth with chronic pulpitis, 274 teeth with periodontitis, 78 teeth with acute pulpitis, 57 teeth were retained deciduous, 18 teeth extracted for orthodontic purpose and 2 were supernumerary teeth. So, 2438 (87.4%) teeth were extracted because of caries sequelae and 351 (12.6%) due to other reasons. (Figure 3) and (Tables 4 and 5). Other teeth: 49.7% of the patients had problems in their other teeth, 301 with missing teeth (M), 100 patient with caries (C) and 50 patients with retained roots (RR). 408 patients had (M, C and RR), 294 patients had both (M and C), 187 had both (M and RR) and 103 had both (C and RR). Pattern of distribution. The distribution pattern of teeth that extracted showed no difference between male and female, but extraction more in male. There was no difference in pattern of anterior or posterior teeth according to maxilla and mandible but posterior teeth more extracted than anterior (Figure 4A). There was change in pattern of anterior and posterior teeth according to diagnosis; periodontitis more in anterior teeth and chronic pulpitis more in posterior teeth, but retained roots with chronic periapical lesions and necrotic pulp were the winner in anterior and posterior (Figure 4B). Chief complaint in male and female toke the same pattern and the pain was more in the both genders (Figure 4C). The pattern of teeth extraction according to age is the same in both maxilla and mandible, but the count more in maxilla (Figure 4D). 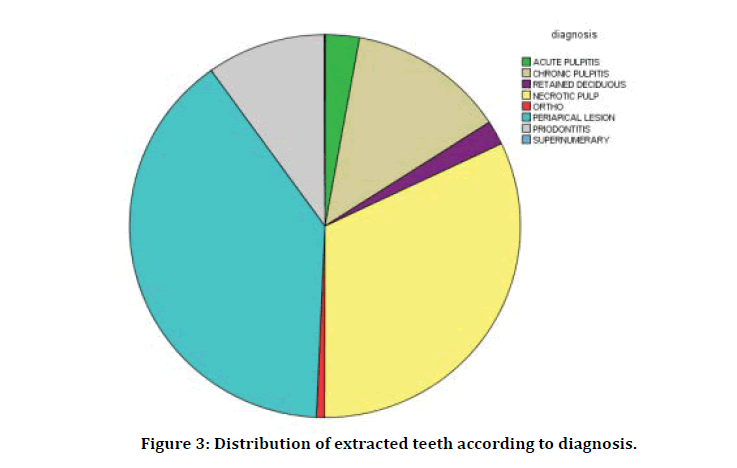 Figure 3: Distribution of extracted teeth according to diagnosis. Table 4: distribution of extracted teeth according to diagnosis.

Table 5: distribution of diagnosis according to age.

The present study demonstrated the reasons for extractions in the college of dentistry. The caries and its consequence were the main cause of teeth loses. This result in the same line of other that found caries was the cause of extraction [3]. The peak extraction result was chronic periapical lesion due to neglecting of caries and in adequate preventive dentistry, dietary bad habit was the most cause of caries and low socioeconomic of patients cause progression of caries until reaching periapical lesion. In this study, nearly most of the teeth that extracted (87.4%) were due to dental caries and its consequences. Periodontal disease was the second cause (9.8%). This agree with other studies regarding caries was the main cause but with widely different in percent, Shah et al found that (50.51%) of extraction was due to caries and its sequelae [4], and Manekar et al. also found the same results [5]. In my study first molars (17.8%) were more extracted followed by first premolars (17.3%) and then the second premolars (15.8%). Shah et al found that the first molar extracted more than others (19.4%) followed by third molars (16%) [4]. This due to a numerous details: 1. First molars were erupted firstly in oral cavity and 2. First molars with a larger surface area than others with surface anatomy that creating good area for accumulation of plaque and subsequent caries [6]. There was a male prevalence (58.6%), which is in disagreement with other studies that founded female more prominent [7-10]. But this result in agreement with the Alhadi et al that found Males comprised 53.6% of patients [11]. Teeth extraction were greater in male patients may be due to their deficiency of time and attentiveness to do restoration, and this accentual by Da'ameh et al. [12]. Lesolang et al. proposed that this condition may be due to the variances in diet and looking for treatment difference between two genders [13]. Saliva and tooth morphology affected by genetic factors, dietary habits, education and socioeconomically situation, as well as dental care and lifestyle issues like smoking, should be considered [2]. In this study, the mean number of teeth extracted per a patient was 1.42 less than 1.9 founded by Jafarian et al. [14], and higher than the 1.3 found by Corbet et al. [15]. These variations are due to organizational differences and different age of population sample. Accordingly, evaluation of tooth extraction records between different nations is troubled with difficulty [14]. In this study maxillary posterior teeth more extracted than others, mandibular posterior teeth were the second, followed by maxillary anterior and then mandibular anterior teeth. And this disagreement with other study that found mandibular teeth more extracted than maxillary [16,17]. Periodontal disease were the second cause of extraction, mandibular anterior teeth were the first followed by maxillary posterior. These disagree with other study that found periodontal disease the main cause of extraction and anterior teeth in both jaws were in the first line [18]. The mean age of this study was (39.96) with range (12-80), (31-40) years with more extractions followed by (21-30) years and (41- 50) years were third. This in line of other study that showed mean age (36.85), the age-group 20-29 years with most extraction followed by the age group 30-39 years. The result was due to the high prevalence of caries during this portion of life [19].

Caries and its progression until reach necrosis and periapical lesions and formation of retained roots that unable to treat by other ways except extraction was the prevalent cause of extraction in this study. Young adults and middle aged groups (21-50) years, show more extraction than others. In this study males were prominence than females. First molars and first premolars were the most extracted teeth. Chronic disease, smoking, dietary habits and low socioeconomic; factors affect oral and dental health and lead to more teeth extractions. Consequently, application of well-organized preventive programs to reduce and overcome caries is mandatory. This program should focus on young age to decrease numbers of extractions.