Background: Human immunodeficiency virus/Acquired immunodeficiency syndrome (HIV/AIDS) present a huge challenge to public health, particularly among women in developing countries. Nigeria has the second highest burden of the diseases worldwide and Rivers state is one of the 36 states in Nigeria with the highest prevalence of the disease. Utilization of family planning services by women living with human immunodeficiency virus (WLHIV) is an effective means to prevent unwanted pregnancies and reduce the transmission risks but it is often neglected in many settings. This study assessed the utilization of family planning services and method preference among WLHIV in Rivers state. Methods: This was a descriptive retrospective study of clients who sought contraceptive services at the family planning clinic of RSUTH from 1st January, 2015 to 31st December, 2019. Records from the family planning clinic were reviewed, data obtained was analysed with SPSS version 23 Results: Seventeen (1.95%) out of 874 clients who utilized family planning services were HIV positive, the clients were all married, parous and had a mean age of 32.06 ± 5.94 years. Most (41.2%) belong to age group 30-34 years. They were all Christians and only 1 (5.9%) client did not have formal education. Their contraceptive choices were IUCD (35.3%) implant (58.8%) oral contraceptive pills (5.9%) with a discontinuation rate of 23.5%. Conclusion: The prevalence of contraceptive uptake among WLHIV in Rivers State is very low, which probably may lead to high rate of unwanted pregnancy and transmission risk. Thus, there is a need to integrate the family planning clinic with the HIV clinic in Rivers State.

Human immunodeficiency virus/ Acquired immunodeficiency syndrome (HIV/AIDS) is a huge public health problem [1]. About 33 million people have died from the disease so far and an estimated 38 million people worldwide are currently living with the disease [1,2]. Almost 70% of them are in sub-Saharan Africa [3,4]. Nigeria has the second highest burden of HIV/ AIDS worldwide. In 2019, an estimated 1.9 million people in Nigeria were living with HIV/ AIDS and 130,000 new infections occurred that year [5]. Women of reproductive age are 4-7 fold more likely than men to be infected with HIV/ AIDS [6]. About 58% of people living with HIV (PLWHIV) in Nigeria are women [5,6], many of whom get pregnant and transmit this infection to the unborn children [5]. About 50-80% of these pregnancies are unwanted [7].

Contraception remains the mainstay for preventing unwanted pregnancy among HIV positive women as well as a critical intervention in reducing mother to child transmission (MTCT) [7-11]. There is evidence that prevention of mother to child transmission (PMTCT) strategy focused on increasing access to modern contraception among women living with HIV (WLWHIV) could reduce by 29% more HIV positive births than prophylactic nevirapine at the same cost [7].Women with HIV, like their counterparts may wish to limit their family size, plan their pregnancy, or avoid pregnancy [7]. However, in Nigeria there is a significant unmet need for contraception among these women [12].Rivers state is one of the 36 states in Nigeria and has the third highest prevalence rate of HIV/AIDs (3.8%) [13]. However, family planning services utilization by HIV positive women and their contraceptive choices have not been well studied in Rivers State. This study aims to assess the family planning services utilization and contraceptive choices, their side effects, discontinuation rate and reasons for discontinuation among HIV positive women in the RSUTH.

This is a descriptive retrospective study carried out at the family planning clinic of the RSUTH in Port-Harcourt, south- south Nigeria. The clinic gets its clients from within Port Harcourt and its environment. The clinic is headed by a consultant Gynecologist, with the support of trained family planning nurses and resident doctors. At the first visit, a detailed history of the clients is obtained and informed consent obtained. The clients were counseled by the family planning nurse practitioners, registrars or consultants on the various methods of contraceptives available and were allowed to make informed choice based on their needs and available contraceptives suitable for them. Thereafter clinical examinations were done to exclude contraindications to the use of chosen contraceptive. Urine analysis and pregnancy test were also done for the clients. Clients were advised to visit the clinic at any time if they had any complaints. At each visit, the client’s complaints were documented and appropriate treatment given. Their weights, blood pressure and results of urinalysis were also noted.

Records from the family planning clinic from 1st January, 2015 to 31st December, 2019 were reviewed, data obtained was entered into a spreadsheet using IBM SPSS version 23 for windows® statistical software and analysed. Results were summarized in tables as means with standard deviations, frequencies and percentages.

Seventeen out of 874 clients that attended the family planning clinic during the study period were HIV positive, giving a prevalence rate of 1.95%. The socio-demographic characteristics of the clients are shown in Table 1 and Figure 1. Their ages range from 20 to 43 years with a mean age of 32.06 ± 5.94 years. Two (11.8%) were primipara, 12 (70.6%) were multiparous while 3 (17.6%) were grand multiparous. Modal parity was para 3. All the clients were Christians and married with 15 (88.2%) having at least secondary education. The seventeen women used three methods of contraception. Six (35.3%) clients used IUCD, 10 (58.8%) used sub dermal implants while 1 (5.9%) used the oral contraceptive pills. This is shown in Table 2. The clients were using one form of contraception or the other prior to their visit at the family planning clinic. Two each (11.8%) used IUCD, injectable and OCP respectively prior to family planning visit. Five (29.4%) used condom while one (5.9%) used Calendar method. Five (29.4%) women never used any form of contraception prior to their visit (Table 3). Four out of the 17 HIV positive clients discontinued their contraceptive methods giving a discontinuation rate of 23.5% (Figure 2). The reasons for discontinuation are shown in Figure 3 and they include missing string 1(25%), heavy menstrual bleeding 2 (50%) and no reason 1(25%). Five women (29.5%) reported some side effects. Of these five women, 2 (11.8%) each complained of vaginal discharge and heavy menstrual bleeding respectively while 1 (5.9%) had missing string. This is shown in Figure 4. 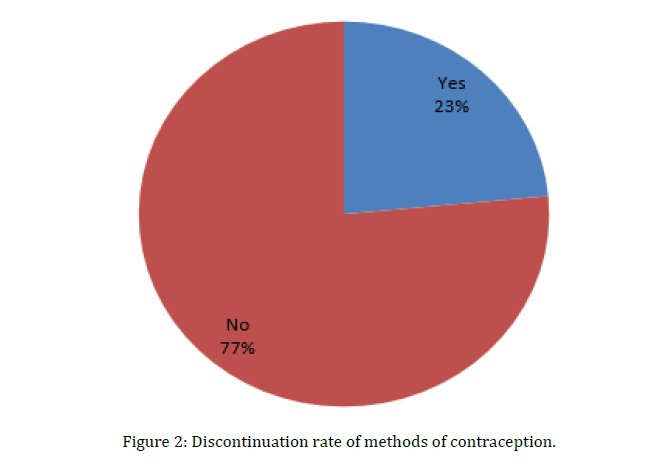 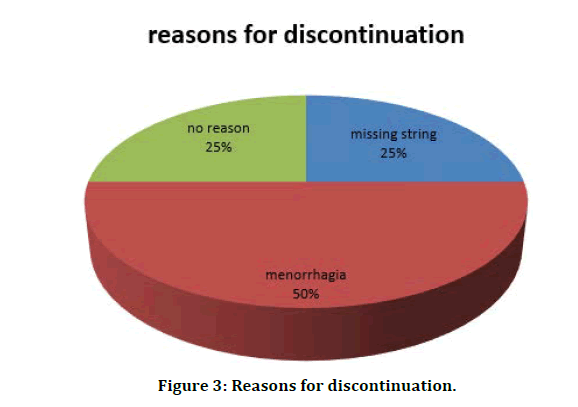 Prevention of unwanted pregnancies among WLHIV is largely dependent on the utilization of family planning services. Women who routinely utilized contraceptives were more likely to avoid unintended pregnancy [14]. In RSUTH, the prevalence of HIV clients utilizing family planning services was 1.95%, which is much lower than the reported prevalence of 7.7% in Lagos State and 27.8% in Uganda [15,16]. Lagos State is one of the 36 states in Nigeria and ranked sixteenth in the prevalence rate of HIV/AIDS [13]. The lower prevalence of family planning services utilization by WLHIV in RSUTH may be due to disconnection between the family planning clinic and the HIV clinic. Both clinics are far apart from each other. In addition, there is the fear that using the same family planning clinic as HIV negative women will increase the chance of exposing their status. To increase the uptake rate of contraceptives among HIV positive women, there should be a regular awareness talk on the usefulness of contraceptives use in the HIV clinic or integration of contraceptive services with STI/HIV prevention services [7,14]. This will go a long way to prevent unintended pregnancies and mother to child transmission (MTCT) of HIV. The mean age of the clients was 32.06 ± 5.94 years which is comparable with studies from south south [17] and northwest Nigeria [18] with mean ages of 34.34 ± 0.66 years and 30.9 ± 7.0 years respectively. All clients in this study were married and parous unlike in previous studies which reported at least one third of the client as single and nulliparous [17-20]. Single women are less likely to be pregnant, and even if pregnant they are less economically empowered to book for antenatal care and more likely to abort the pregnancy with its associated morbidity and mortality in this environment.

In this study, 6 (35.3%) used IUCD, 10 (58.8%) used sub-dermal implants while 1(5.9%) used oral contraceptive pills. Studies done in Uganda and Ethiopia showed that the commonest contraceptive methods were injectable and IUCD respectively [14,16]. Also earlier studies had shown that a significant proportion of WLHIV use dual contraception, barrier contraception and BTL [15,17-21]. This difference could be attributed to the fact that most HIV positive patients in RSUTH accessed the family planning clinic through the antenatal and postnatal clinics. The information on contraception received by these women in the antenatal and postnatal clinics is largely centre on prevention and spacing of pregnancy, not on transmission risk of HIV. Therefore for optimal result, dual contraception involving barrier method of contraception with an effective modern contraception is recommended so as to prevent unwanted pregnancies and curtail the transmission of HIV [7,20]. Condom use was not well documented in the records of family planning clinic of RSUTH. It would have been good to know if these 17 women were using dual method of contraception. Women who are HIV positive are advised to use back- up method as long as they decide to have sexual intercourse which by far increases the rate of utilization of condom as compared to HIV negative mothers.

The much higher discontinuation rate in south west was because a considerable proportion of the study population were single and nulliparous [15]. Hence they desired pregnancy with time, and most opted for user dependent methods and short acting reversible contraception. The side effects depend on the methods used [22]. In this study, 5 clients (29.5%) reported side effects, of these, 2 (11.8%) complained of vaginal discharge, 2 (11.8%) heavy menstrual bleeding while 1 (5.8%) had missing string.

Ethical approval was given by the Hospital’s Ethics committee.

Our gratitude goes to the staff of the family planning clinic for the assistance rendered during this study.

Authors have declared that no competing interests exist.

There was no sponsor for the study.