It was believed that the vasoconstrictors in the local anesthetic solutions have a potential physiological responses; including: alterations in the heart rate, increase in the blood pressure, abnormalities in heart beats, ischemic changes, release of endogenous catecholamine, endocrine responses to surgery, and hypokalemia [1,2]. In other studies, researchers concluded that the quantity of the vasoconstrictor used during dental treatment is so little that make their effect is innocent and have no significant influence on the cardiovascular system [3,4].

This study aimed to investigate the effect of using one cartridge of local anesthesia contains 1.8 ml of solution composed of 2% lidocaine, and 1:80000 epinephrine (equivalent to 22.5μg) on the readings of systolic blood pressure (Sys. BP), diastolic blood pressure (dia. BP) and pulse rate (PR) in non- compromised patients.

This prospective clinical study applied for patients attending the dental clinic at a time interval between November 2017 and May 2019. Thorough history taking were accomplished for the patients and pre prepared specialized case sheet were filled for each one to record his/her name, age, gender, chief complaint, and medical history. The participants with any cardiovascular problem, congenital heart disease and on medications were excluded from the study. Extra and intraoral examination were made to decide the clinical diagnoses of the cases and made a suitable treatment plan for each to proceed with the treatment. The patients signed on a written consent involving their acceptance to be participated in the research.

The measurement of BP and PR were made by electronic device (beurer, germen). The cuff of the device wrapped around the arm and the patients lie in a semi supine position. The records collected at two stages:

1st record: after filling the case sheet once the patient became relaxed.

2nd record: at 5 minutes after administration of the local anesthetic solution.

The local anesthesia was injected by either infiltration or block technique depending on accused tooth position in the dental arch. Dental extraction proceeded after signs of deep anesthesia were confirmed. Each patient received 1.8 ml of local anesthesia contains 2% lidocaine and 1:80000 epinephrine.

Statistical analysis of the data results can be summarized under three categories: 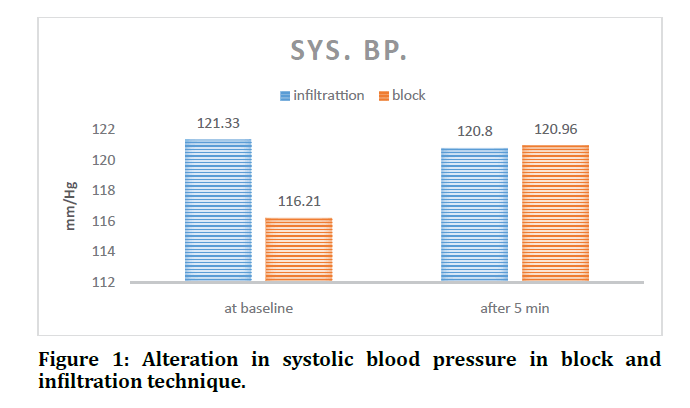 Statistically significant difference was observed between the mean values of sys. BP of male and female patients at base line (p<0.05) with a higher value observed in males, these differences became non-significant after injection (Table 2). The increase in the mean values in females (3.36 ± 11.37) table 3. While in males the increase was (0.09 ± 11.39) (Table 4). No obvious differences were observed regarding patients age as a whole or in males and females independently.

Table 2: Statistical difference between male and female regarding (sys. dia. BP and PR.) At baseline and after 5min from injection.

Table 3: Changes in (sys. dia. BP and PR.) of female patients between baseline and 5 minutes after local anesthesia injection.

Table 4: Changes in (sys., dia. BP and PR.) Of male patients between baseline and 5 minutes after local anesthesia injection. 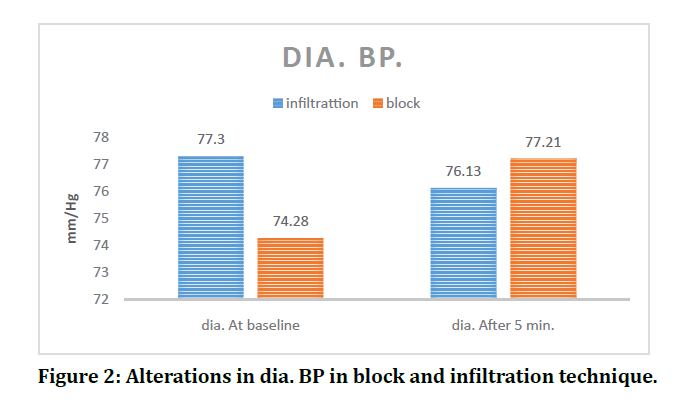 Figure 2: Alterations in dia. BP in block and infiltration technique.

No significant differences were observed regarding patients' age and gender, and the dia. BP increased in both males and females (Tables 3 and 4).

Paired t test showed an increase in the mean of PR from (87.57 ± 9.37) at baseline to (89.51 ± 9.67) after 5 minutes of injection with a significant difference (p=0.009) (Table 1). The mean value of PR were increased in both males and females with a significant increase existing in females (p<0.05) table 3, 4. Subdividing the males and females into age groups (more and less than 40 years) showed same results in both groups. Type of injection has no obvious statistical results, with the mean of PR increased in both techniques (Figure 3). 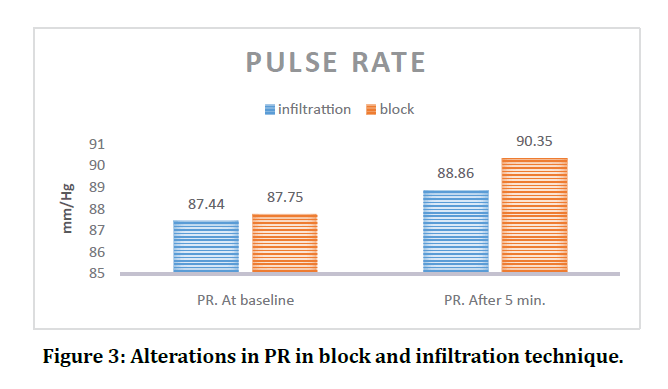 Figure 3: Alterations in PR in block and infiltration technique.

Unfavorable clinical effect of the vasoconstrictors that contained within the local anesthetic solution, to some extent, remains in a controversy. Using these components does not contraindicate in healthy patients. However, there are beneficial effects of such mixtures, different side effects have been reported in earlier studies primarily upon cardiovascular system [5-7]. Factors that may predispose to such responses include injection pain, treatment stresses, intravascular slippage of the material, and drug interaction [8].

In the present study two time points were selected to calculate the effect of consuming local anesthesia with epinephrine on BP and PR. The starting point when the patients became relaxed after making a communication with them during examination and filling of the case sheet. The second record were made after 5 minutes of local anesthesia injection, this time was selected so as to measure the blood pressure when the maximum plasma epinephrine level reached where the maximum plasma level of epinephrine calculated at a time between 3 to 6 minutes after injection [9]. The results of this study showed no statistically significant difference in Sys. And Dia. BP (p<0.05), where's the PR increased significantly between baseline record and 5 minutes after injection (p>0.05).

Abu-Naim et al. did not observed noticeable effect on BP after local anesthesia injection and suggested excluding the pharmacological and emotional effect of needle injection. They recommended that the invasiveness of the procedure is the triggering factor for the release of endogenous catecholamine especially in minor oral surgery procedures [10]. Many other studies had reported no significant changes in BP during local anesthesia administration regardless the presence or absence of epinephrine in the anesthetic solution [11-14].

On the other hand Ketabi et al. observed statistically significant increase in the BP and PR of healthy patients received 25 μg of epinephrine in the local anesthesia; the authors mentioned that these changes have no significant clinical value [15]. Elad et al. verified substantial cardiovascular alterations after ten minutes from injection of lidocaine with a similar adrenaline concentration (1:80000) [3]. Gregorio et al. had stated that local anesthetic solutions in general containing 1:100000 and 1:50000 epinephrine concentrations are associated with greater effect than 1:200000 epinephrine preparations [16].

Significant increase in PR in the present study may be related to the emotional stresses encountered during anesthesia injection and enhancement of sympathetic activity related with increase in plasma adrenaline concentration [17]. Liau et al. reported the same results but with the use of higher dose of local anesthesia solution [18]. The significant changes in PR were more obvious in females, this may be related to the stress and fear from dental treatment, Previous researches stated that women be likely to have more anxiety level than men [18-20]. It's unclear why the mean of BP decreased in infiltration technique and increased in block technique, this may be belonging to intravascular injection. This explanation simply precluded as the aspiration technique utilized and the cases that fail to attain deep anesthesia in a single carpool were excluded from the data. Nevertheless, these slight changes have no statistical significant difference. Paramaesvaran et al. on their study (using 2% lignocaine with 1: 100,000 adrenaline) observed a reduction in BP and heart rate, and concluded that most patients which received local infiltration had a decrease in PR during or after local anesthesia injection [21].

The cardiovascular effect may be related to endogenous release of catecholamine rather than that exogenously received during injection, changes caused by emotional stress guise those due to exogenous epinephrine in the carpool and an unexpected deficiency of epinephrine, known as epinephrine collapse, may occur after stress [22].

Calculating the maximum recommended dose of local anesthesia belong to two formula, the first one to calculate the maximum lidocaine level, 7 mg/kg is the maximum dose of lidocaine that equal to 350 mg/50kg (i.e., 9.2 carpool of 1.8 ml), which contain epinephrine. While the maximum safe plasma concentration of epinephrine is only 40 μg, whereas higher doses may cause vascular constriction and dangerous complications make it dangerous for patient with cardiovascular diseases [23,24] depending on these theories about 3 ml of local anesthesia of 1/80000 epinephrine (less than 2 carpool of 1.8 ml) is safe for such patient. Estimating these doses; making the need for further establishing the effect of anesthetic solution on different situations regarding the patients' health and the amount of the anesthetic solution.

From the results of this study, and depending on the used dose of local anesthetic solution with the number of participated patient, we can conclude that the local anesthetic with vasoconstrictor have a slight effect on the patients' blood pressure and have more effects on the pulse rate. Future studies by applying different doses of local anesthesia applied on healthy and compromised patients needed to be conducted in order to clearly calculate the maximum safe concentration of vasoconstrictor that can be administrated within the single visit.