Palmar lesions may occur alone or along with involvement of soles and other areas. The most common conditions of palmar lesions are Psoriasis, Eczema, Dermatophytosis, Verruca vulgaris, Syphilis and Seasonal exfoliation. Other conditions over the palms include Drug induced, Callosities, Keratoderma and Heloma. Skin biopsies have received from enrolled patients. We looked at the H&E-tained sections of the skin biopsy of palmar lesions to observe different histopathological patterns and to conclude the most common histological pattern in our study, where it was seen that parakeratosis was more uniform in active lesions, Munro micro abscesses were larger and more numerous. which concludes that psoriasis is the commonest palmar lesion. we conclude that the commonest palmar histopathological pattern was Psoriasis over palms and shows significant role in concluding the diagnosis and Clinico pathological correlation is always the best to aid in the final diagnosis which helps in the proper and further management of the patient.

The aim of the study to know the different histopathological patterns of most common palmar lesions in 100 patients with palmar lesions attending dermatology department at Sree Balaji Medical College and Hospital.

Not consenting for the study.

Patient not willing for investigations.

Consensus for study. Recruited patients have been exposed to the following.

The most common conditions of palmar lesions are Psoriasis, Eczema, Dermatophytosis, Verruca vulgaris, Syphilis and Seasonal exfoliation. Other conditions over the palms include Drug induced, Callosities, Keratoderma and Heloma. Skin biopsies have been obtained from enrolled patients. We examined the H&E-stained sections of the skin biopsy of palmar lesions to observe the histopathological study [1-6].

It is mainly “Palmar er ythema” whic h is a symptom of many different conditions. Its appearance is often the first sign of an underlying medical concern. About 23 percent of people who have cirrhosis of the liver also experience palmar erythema. The difference between the present examination and perceived histopathological includes in a very much created injury of psoriasis (for example nonappearance of uniform parakeratosis, nearness of typical stratum granulosum and ordinary thickness of suprapapil layer and lower occurrence of munromicroabscesses) can be clarified based on biopsies of patients from various sores. Therefore, in our study, a skin biopsy is perfomed owing to different palmar lesions for histopathological examination, inorder to get a proper diagnosis, to know the most common palmar lesion and also to correlate clinically for better treatment.

Diagnosis of various conditions of palmar lesions was made after history taking and detailed clinical examination. Skin Biopsy was done to know the histopathological discoveries in patients with palmar sores going to dermatology office at Sree Balaji Medical College and emergency clinic. Thusly after histological assessment of these 100 cases it might be instigated that there is an amazing spread in histological features of the impressive number of conditions. The histopathological slides were self-governingly assessed by three blinded onlookers concerning the going with histologic parameters: proportion of plasma inside the slopes of parakeratosis (pitiful or perceptible), closeness of slopes of parakeratosis with neutrophils, spongiform micropustules of Kogoj, follicular halting, broadening of the infundibulum, shoulder parakeratosis, epidermal spongiosis (slight or unquestionable), lymphocytic exocytosis (delicate or moderate), clubbed rete edges, rete r idges of even lengths, decreasing of the suprapapillary plate, edema of the papillary dermis, extravasated erythrocytes, tangled veins in the papillary dermis that nearly contact the epidermis, dermal provocative cell entrance (smooth, moderate, or thick), and the amount of mitotic figures. According to Levers, the thickness of the granular layer in the standard skin is compared to the thickness of the Horney layer. The granular layer is only 1-3 layers thick. Every now and again, there is an inverted association in psoriasis between the proximity and thickness of the granular layer and the parakeratoid layer. In this assessment, the granular layer was shown to be absent in larger cases 58 per cent, the granular layer reduced by 31 per cent and no setback in 11 per cent of cases. Van Scott EJ, Ekle TW, Arch dermatologists 1963 showed a wide elongation of the basal layer as a result of the increase in the number of mitosis of the rete edges resolved to be 27 per cent Events of mitosis in uninvolved skin showed mitotic figures 1 for every 1 rete edge in 41 per cent and additionally extended numbers in the supra-basal layer in 17 per cent in particular, moderate addition in 12 per cent, delicate increase in 9 per cent of cases, the rest showed no mitotic figuresNeutrophil parakeratosis slops address the most reliable sign of munromicorabsceses. A mostly delicate provocative attack in the upper dermis and papillae involving lymphocytes, with the exception of early wounds in which neutrophils are additionally present.. Gerald G. Kruiger, Skin Transplant Evaluation of Intrinsically Athymic (Exposed) Mice where Nude Mice was joined with one of three skin types, such as the usual human skin or skin structure, psoriatic subjects included (or drawn) with disease. By far the majority of the typical histological findings in the epidermis related to psoriasis are normal acanthosis, parakeratosis and reduction of granular layer. Psoriasis is a typical incessant, backsliding, papulosquamous scatter, portrayed by an epidermis secured by gleaming scale. The scalp, sacral locale, and extensor surfaces of furthest point are normally included, regardless of whether flexural and intertriginous regions might be influenced which is designated "converse psoriasis". Contribution of nails is visit. Psoriasis is a powerful dermatosis with morphological changes during the development of an individual injury. The beginning period comprises in stretching and dilatation of veins of the papillary derma, with related edema and lymphocytic penetrate (perivascular binding). Vessels are enlarged and convoluted, with certain neutrophils in their lumen. Lymphocytes and neutrophils rise up out of the vessel arriving at the epidermis ("squirting" papilla). In an investigation Tinea Pedis and Tinea manuum, out of 15 cases, 9 (60%) were guys and 6 (40%) were females. In Hyperkeratotic skin inflammation, 33 (68.75%) were guys and 15 (31.25%) were females out of 48 cases. In this manner from the present investigation it very well may be seen that in palmar psoriasis there was prevalence of guys wi th M:F of 1.31:1, in Tineamanuum there was power of guys with M:F proportion of 1.5:1 and in Hyperkeratiotic skin inflammation likewise there was transcendence of guys with M:F proportion of 2.2:1. 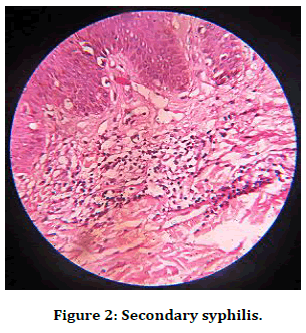 Pustular psoriasis: The Munro’s micro abscess is more clearly visible in this section showing collection of neutrophils in the stratum corneum (Figure 3). Verruca vulgaris shows features of hyperkeratosis, acanthosis and papillomatosis. Elongation of rete ridges and inward curving along with groups of large, vacuolated cells (koilocytes) lie in the upper stratum malpighii and in the granular layer (Figure 4). In our study we concluded that, histopathology was really useful in our studies to aid in the final diagnosis. The creators guessed that the vague histologic discoveries could speak to both an inspecting blunder with respect to the clinician taking the biopsy, specifically, picking abraded injuries that relate to a later phase of the malady, or the pathology research center in testing the sore for histology, considering suitable a dynamic cutting of the tissue square and male preponderance with psoriasis Vulgaris was seen as the highest number among palmar lesions and also proven through histopathology. Also, few cases where the histopathology findings were different from the clinical diagnosis and most of the confusion arised between eczema and psoriasis where biopsy was done for histopathological examination to conclude the final diagnosis. Thus we conclude that the commonest palmar lesion is Psoriasis over the palms and Dermatopathology has a very significant role in concluding the diagnosis and Clinico pathological correlation is always the best to aid in the final diagnosis which helps in the proper and further management of the patient.