Introduction: IQ test continue to be one of most reliable tools to measure intelligence skills of the human. Method: In this paper, the different types of perceptions of the undergraduate students were compared to their real full scale IQ scores.

Results: Results show that students overrate or underrate their IQ skills. Students with lower IQ scores tend to believe that this may affect their academic and future job performance.

Conclusions: Discussion of the findings was presented with further advises for the educators and counsellors.

Most of the experts and researchers describe intelligence as a problem-solving skills and abilities. These skills can be listed as having good vocabulary skill, decision making, logical reasoning, memory and mental speed [1]. Intelligence Quotient (IQ) can be directly linked to mental age and chronological age. Until 18 years, mental age should develop with chronological age, while it is assumed by 18 years it would be fully developed [2]. It is now appears that fluid intelligence (solving puzzles and coming up with problem-solving strategies) may start to decrease with older age after 18, but crystallized intelligence (knowledge that comes from prior learning and past experiences) continue to develop throughout the person’s lifespan [2,3].

Speaking about IQ from quantitative perspective, IQ is total score (or Full Scale IQ – FSIQ) which is derived from some standardized tests which are designed to measure human intelligence [4]. In other words, IQ tests assess person’s mental abilities to compare with other people abilities in quantitative way [1,5].

For several decades the IQ score and IQ test were subject to discussion. Many re-searchers and practitioners argued about reliability of IQ tests and IQ scores; do they really predict the intelligence or it is only predicting some numeric abilities of the person. But psychometricians generally accept IQ tests as a statistically reliable tool, and have sufficient statistical validity to use it for different type of clinical purposes [6,7]. For instance, Kaufmann stated that IQ scores are decreasing starting from skilled workers to unskilled workers, thus underlining the reliability of the test [3].

FSIQ was directly related to academic success and job performance in many re-searches. Starting from primary school up to university level, educational attainment can be moderately predicted by IQ, while it is accounted for almost 50% of the variation [4, 8]. IQ scores are used during educational placement as well, as they have very high correlation between SAT (r=0.82) and GCSE (r=0.81) scores [9,10]. But there is contradictive positioning as well, like Kamphaus et al. stated that while explained variance for Mathematics was 58% and 48% for English, IQ test couldn’t present such strong correlation between Art-Design subjects, falling below 20% of explained variance [10].

IQ tests continue to be practical tool in job interviews and evaluation of the job performance [11]. In the same way, IQ tests were strongly correlated with job performance and job knowledge acquisition by other researchers [4,9]. For instance, Kauffman et al. presented a mean IQ scores for profession fields like professionals and technical, managers and administrators, clerical workers, semi-skilled workers and finally unskilled workers and their corresponding IQ scores were in ascending form, respectively [3].

As the current literature shows, IQ tests were extensively investigated. Its relation to academic success and job performance were subject for researches. But there is still a gap which need to be addressed, which can be asked as one summarized question - what is the human’s perception toward the IQ scores and if this perception has real basement? In this research, several perception aspects toward IQ tests were investigated. As the IQ is correlated to academic success and job performance, undergraduate students’ perception in this field was investigated; do they accept IQ test as reliable tool, do they do rational self-evaluation in terms of IQ skills and some other perceptions.

Purpose of the Study

This research tends to answer following questions and objectives:

✓ If repetitive taking of IQ tests improve the IQ scores.

✓ To compare FSIQ scores of the students with different perceptions, in term of academic and job success.

✓ If students self-believe in verbal, logical and numeric IQ have real basements.

✓ If the students are overrating or underrating their IQ skill abilities.

The experimental protocol was by following international ethical standards. The study was performed per under the Helsinki Declaration (1975, revised in 1996-2013). The aims and objectives of the study were explicitly explained to the participants before the commencement of the study. All participants voluntarily gave verbal informed consent to participate in the study.

The Wonderlic Personnel Test is a timed 15-minute test made up of 50 questions, where each correct answer worth one point. Scores can range from minimum of 0 to maximum of 50 [13]. The questions were marked as verbal type, logic type or numer-ic type question by the author for later use. Thus, test contained 17 verbal, 17 numeric and 16 logic questions. Students were requested to finish the test in 15-minute period. No time extension was given. Three subsections were marked as VIQ–verbal IQ, LIQ–logic IQ and NIQ–numeric IQ. The sum of VIQ, LIQ and NIQ was marked as FSIQ– full scale IQ.

The general knowledge about IQ, IQ test and perception of IQ was asked to students. Table 2 is summary of this survey with shortened question topics for the further use.

All the measures values are given as a mean (M) +/- standard deviation (st.dev.). The statistical analysis tool was SPSS, v.26. The Student’s t-test was used to compare means of the groups. Pearson correlation coefficient was employed to establish relation between two different datasets. The p value equal or below to .05 was accepted as statistically significant.

Analysis of the Results

Table 3: Distribution of the groups based on survey.

General performance of the participants

The Figure 1 presents the distribution of FSIQ (M=24.05, st.dev=6.66) and CGPA (M=3.35, st.dev=0.87) scores of the students with respect to normal distribution curve. While FSIQ score is almost perfectly fit to normal distribution, CGPA also fitting the curve with some variations. Thus, the scores are reliable to suggest significant differences, if they exist. As the supportive fact to the existing literature, there was significant correlation (r.=.34, p=.0001) between FSIQ and CGPA score.

Student’s t-test results are presented on Table 4. FSIQ scores are compared between groups, and the significant ones are sketched as boxplot in Figure 2. No significant difference was detected between FSIQ scores of the students who took full scale IQ test before and firsttime taker (Q2). Thus, deriving conclusion that repetitive taking IQ test has actually low effect on improvement of FSIQ. In the same manner, one-way ANOVA test showed that there was no significant score difference between students position predictions - Top 10%, upper half lower half (Q7). That means that students can easily overrating or underrate their IQ abilities. 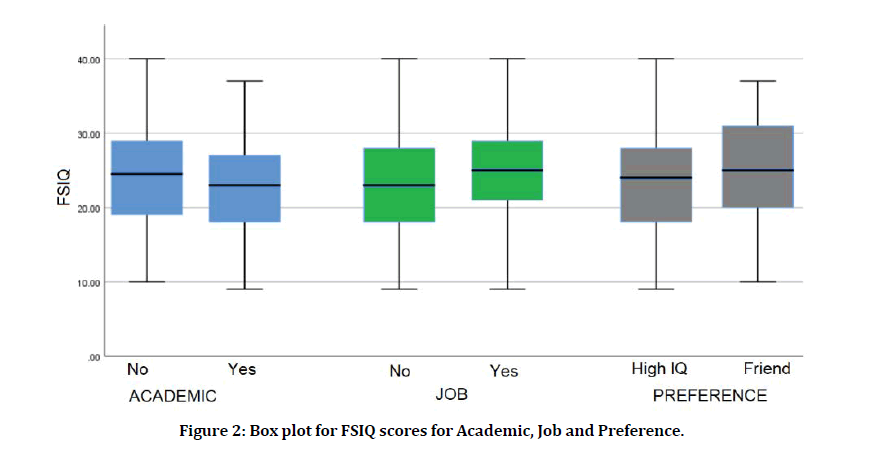 Even though it was not the objective of this study, one more significant finding was that male students of private university in Nigeria scored higher than female students from the same environment. This phenomenon was discussed in many previous researches, but no common conclusion was derived, as most of the researcher’s states that difference in FSIQ scores between genders may differ with respect to countries, cultures, nations and tribes.

The second part of the experiment was to see if the IQ strength perceptions of the students are reflecting the realities. Students were asked to identify if they are weak or strong in verbal, logic and numeric IQ. Their respective scores in real verbal, logic and numeric IQ test were compared. Table 5 is summary of the subsections. The is no significant difference between VIQ and LIQ scores between weak among strong groups. This fact leads us to the conclusion that students wrongly believe that their verbal and logic IQ are strong. On the other hand, more than half of the participants described their numeric IQ as weak, and their respective NIQ scores are significantly lower than those who describe it as strong. In conclusion, it is clear that students clearly know their numeric abilities, whereas they overrate or underrate their verbal or logic IQ skills. This fact was also supported in student’s position predicting, where students overrated or underrated their class position.

During the experiment following answers were given to the questions and objectives asked in Section 1.1, based on the results of the experiment.