Knowledge Awareness and Perception on the Addiction to Movies among Urban Teenagers: A Survey

Recent years, a variety of scientific studies have provided data on the prevalence of movies and theater addiction among different age groups. Addiction is once”s psychological and physiological inability to stop consuming a chemical, drug or activity. Some teenagers are addicted to watching movies, video games, Internet etc. Addiction to internet has been associated with indicators of social isolation and remarkably a measure of depression. In day to day life, the internet has become a most important part of daily life for most teenagers. They mainly need it for education, information searching, entertainment, mail and social interaction purposes. But moreover, extensive use of internet can lead to addiction. Addiction to internet has been consistently reported to result in dangerous outcomes including internet gambling, misuse of social media, and a host of other internet-related problems that can often result in depression, suicides, and death. A questionnaire was designed online in a Google docs with questions related to the awareness on movie addiction. The study population included was the dental students. Survey results were analysed statistically. The survey response collected and the data was analysed. From the survey, it is very much evident that, urban students have adequate awareness on movie addiction and its side effects. This survey concluded that teenagers are aware of movie addiction.

Over the past decade, research into nanotechnology [1-4], analyzing the cytotoxicity of the substance [5,6] cancer biology [7-11] and the benefits of various natural products [12] and other advanced researches [13,14].likewise research into “addictive technological behaviors” has significantly increased [15]. In Recent years, a variety of epidemiological studies have provided data on the prevalence of movie theater addiction in different age groups. Addiction is once”s physiological inability to stop consuming a chemical, drug or activity. Some teenagers are addicted to watching movies, video games, Internet etc. Addiction to internet has been associated with indicators of social isolation and remarkably a measure of depression [16]. In day to day life, the internet has become a most important part of daily life for most teenagers. They mainly need it for education, information searching, entertainment, mail and social interaction purposes. But moreover, extensive use of internet can lead to addiction. Addiction to internet has been consistently reported to result in dangerous outcomes including internet gambling, misuse of social media, and a host of other internet-related problems that can often result in depression, suicides, and deaths [17]. Likewise the Negative outcomes of movies addiction among students are also reported in the literature and they include reduced academic performance, psychological well-being, social involvement, rise in university dropouts, and depression [18]. Most teenagers spend 50 hours per week in front of a screen. Now it appears that often playing video games can have potentially damaging effects upon a minority of individuals [19]. Likewise often watching movies the individual display compulsive and addictive behavior and they will go to any extent to satisfy their needs. As movies and online platforms to watch movies become a regular event of everyday life, the potential for overuse is in inappropriate time, may lead to addiction. Addiction to the Internet and online movie watching shares some of the negative aspects of substance addiction and has been shown to lead to a result such as failing school, family, and relationship problems [20] as same as addiction to movies leads to the consequence as such medical implication which can be as detrimental as cirrhosis of the liver due to alcoholism, or increased risk of stroke due to cocaine use owing to their sedentary life style [21].Teenagers are likely to use to watch movies anywhere from forty to eighty hours per week, with single sessions that could last up to twenty hours. To balance such excessive use, sleep patterns are typically disrupted due to late night logins. Additionally, the sedentary act of prolonged movies (monitor) may result in a lack of proper exercise and lead to an increased risk for carpal tunnel syndrome, back strain, or eye strain. While the physical ill effects of utilizing the Internet are mild compared to chemical dependency, addictive use of the Internet will accommodate in similar familial, academic, and occupational impairment [22]. The exact scenario will happen for movies addiction. The aim of this survey is to create awareness on the movie addiction and its side effects among college students.

A survey conducted with self-prepared questionnaire comprising of questions related to the movie addiction and its side effects .The sample population for the survey is 100 urban teenagers who are currently studying dentistry. The questionnaire was prepared with a questions composing of movie addiction .These questions help to determine perception on addiction to movies and that help to depict their knowledge and awareness on this topic. Steps like, selecting survey participants randomly, fixing restrictions over the particular population, elimination of irrelevant questions being asked to participants were taken as few measures to prevent sampling bias in the survey. The response recorded using the online platform "Google Docs'' was analyzed using the statistical software SPSS version 2.0 .Data analysis was carried out with the responses recorded in the software and the result was represented using the pie chart [23].

The responses are collected and the data were analyzed based on perception and addiction to movies. The total responses are 100. From the results, when asked about, do you watch your favorite hero movies on the same day of release, 88% survey population were happy to view the movie on the same day of release. This proves the result of the previous study done on that [24]. Based on the developing a relationship with the onstage actor also added about the atmosphere present in theatre during this time.

In the current study carried out responses collected for depicts that 99% of the respondents prefer watching English movies rather than regional movies. It is evident from of the current study that around 99% of the population restrict themselves from watching movies during examination period (Figure 1 to Figure 8).

Figure 2. Represents the distribution of participants based on their interest towards the preferred choice of language in watching movies , where a majority of 99% ( blue) of the study participants prefer their own mother tongue and only 1 %(red) of them wanted to watch English movies. 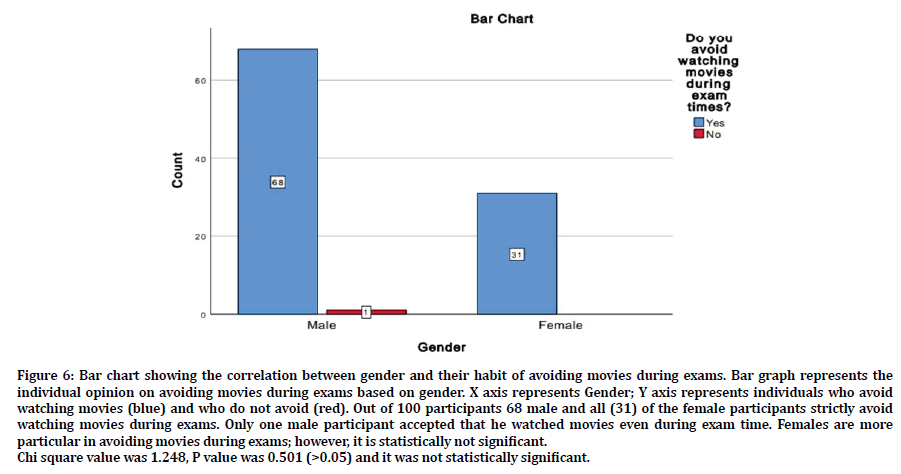 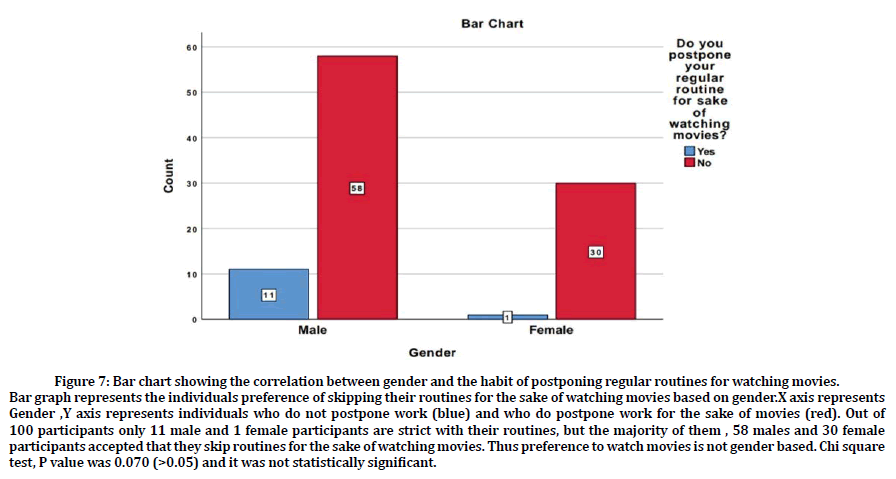 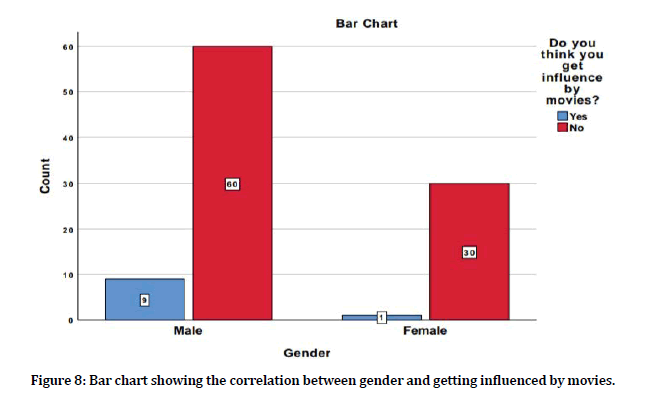 Figure 8. Bar chart showing the correlation between gender and getting influenced by movies.

When the study population is asked about the preference to watch movies at the theatre (or) download or watch at home moreover 72% of the population preferred to watch at the theatre. From that we came to know that, they like the theatre atmosphere, being like their part of life. This also proves the result made on the previous study, the impact of theatre in life [25].

In one of previous cross cultural cohort Study carried out among German students found that habit such as smoking was present upto 74% in movies and around 19% of the students started smoking by watching these movies. When compared with our study findings in the current survey, the results was similar and revealed that around 90% of the participants are influenced by many activities done in the movies [26].

The present study depicts that about 55% of the participants are used to the habit of watching movies with friends in the theatre. When compared with the previous study the results of both the study was similar that personals love watching a movie together with friends [27].

The survey conducted has strengthened the fact that similar to addiction to media, movies addiction is dangerous too. Knowledge and awareness should be given to the people at the right age. From this survey, it can be concluded that urban teenagers are aware of their addiction to movies. Most of them are able to balance their routine activities along with watching their favorite movies.