Microleakage is the passage of substances such as oral fluids, bacteria, molecules and/or ions into a gap filled with fluids or a flaw in the structure that exists between the tooth structure and the restoration or present naturally [1]. Microleakage is one of the major reasons for the failure of indirect restorations that affects its longterm survival in the oral cavity [2]. Marginal microleakage may lead to further loss of bonding strength, postoperative sensitivity, secondary caries and if left without treatment, may lead to pulpal pathology [1]. There are numerous variables that affect the quantity of microleakage, and a complex interaction exists between these variables that are related to the luting agent, dental restoration, and tooth structure [3].

Most authors state that the interface between the tooth and the cement is regarded as the weakest link in the indirect restorations; in addition to that, some amount of microleakage is constantly existing [4]. One of the factors that affect microleakage is the choice of luting agent as different types of luting agents have different properties such as coefficient of thermal expansion [5], hygroscopic expansion, polymerization shrinkage [6], bonding with tooth structure [7] and bonding with zirconia [8]. Moreover, to determine which cement to use, some cement properties must be kept in mind, such as type of cement, film thickness, viscosity, particle size and the volume of luting agent placed within the dental restoration before the cementation process.

The in vitro procedure of exposing a tooth with a restoration to temperature limits that correspond to the oral cavity's temperature limits is known as thermocycling. This procedure is combined with the application of tracers such as bacteria, dyes and radioactive isotopes to detect microleakage, followed by the use of measuring methods to measure the degree of microleakage in the areas of the sectioned sample. Generally, thermal stress is pathogenic by two means; the first way is the mechanical stress caused by the temperature variation may lead to crack propagation through the bonded interface. The second way is the changing gap dimensions that lead to the passage of oral liquids into and out of the gap [9].

The application of cement spacer for the reduction of hydraulic pressure between the dental restoration and the luting cement to allow the flow of excess cement, reduce the seating time and improved crown restoration seating [10]. Hammood et al. [11] reported that 25μm marginal cement space reduced the marginal and internal gaps.

A total of forty-eight sound maxillary first premolar teeth were used in this study. The teeth were stored in 0.1% thymol for a week then placed in deionized distilled water. All teeth were marked 2 mm apical to the CEJ with a permanent marker (Staedtler, Germany). Each tooth was then embedded into a block of acrylic resin; a surveyor was used to align the long axis of the tooth to the long axis of the acrylic block (a silicon rubber mold was used to construct the acrylic block).

All the teeth were prepared to receive the zirconia crowns following the guidelines recommended for KATANATM Zirconia. The axial reduction was 1-1.5mm, with chamfer finishing line 0.8mm in depth, 4 mm occluso-gingival height and the total convergence angle was 6 º.

The samples were scanned using the Medit i500 intraoral scanner (Medit, Korea). The design of the fullcontour zirconia crown was done using the EXOCAD software system. All groups’ crowns were milled with the same 5-axis milling machine (K5, VHF, Germany), then sintered by AUSTROMAT 674i sintering furnace (DEKEMA, Germany).

After the sintering procedure, the inner surfaces of all crown restorations were sandblasted with aluminum oxide particles ≤ (50 μm) at 2.5 bar at a distance of 10 mm for 15 seconds using a Lab Sandblasting machine (EASYBLAST, BEGO, Germany). After that, the crowns were thoroughly cleaned in an ultrasonic cleaner for 5 minutes in order to eliminate any residue of blasting agent according to the manufacturer's instructions. The internal surface of the crowns was cleaned with an alcohol solution, then rinsed with water and finally dried with water-free oil-free air.

For each specimen, the crown was seated onto its respective tooth and the margin was checked. For each type of cement, manufacturer instruction was followed during the cementation process.

The crown inner surface was filled by the cement and seated on its tooth with a rocking motion using full finger pressure for complete seating of the crown. For standardization purposes, the crown with its tooth was seated inside the specimen holding cementation device and held for 6min under load (5 kg). Then the samples were allowed to bench set for one hour then placed in distilled water for a week before thermocycling.

All the samples were thermocycle in an automatic thermocycling device between 5°-55°C water baths for 500 cycles According to the latest International Standardization Organization specifications (ISO/TS 11405:2015) with 30 seconds dwell time in between.

After thermocycling the root surface of all the samples was covered with two layers of nail varnish, leaving 1mm under the finish line to prevent dye penetration from the root surface. All the samples were immersed in 2% methylene blue dye for 24 hours. Then the teeth are thoroughly rinsed to remove excess dye.

Prior to the sectioning procedure, each tooth with its respective zirconia crown restoration was covered with a transparent material (Renksan clear casting epoxy). A microtome (MT-4 Diamond cut-off saw, USA) with a sectioning blade of 0.35mm in thickness with efficient water cooling was used to section the samples buccopalatly into two sections (mesial and distal). For standardization purpose, only the distal section was used in this study to measure the microleakage.

For each tooth distal section, dye penetration was measured from the external surface of the crown to the point where no purple dye could be seen. Linear dye penetration was measured in micrometers at the buccal and palatal margins under a digital microscope (Dino- Lite capture 2.0, Taiwan) at 40X magnification. All the microleakage measurement was done by ImageJ software (Image J 1.50i, U.S. National Institutes of Health، Bethesda, MA, USA). The linear dye penetration for each sample was measured by the average of both readings [12]. The data was statistically analyzed using One-Way ANOVA and post hoc Bonferroni tests (Figures 1 and 2). 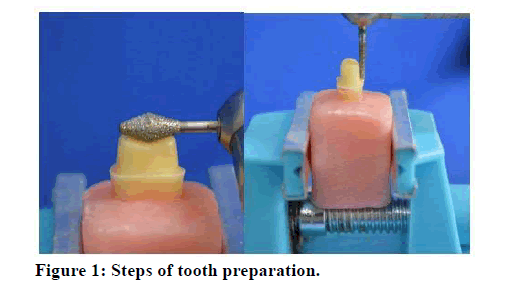 The descriptive statistics of the results of this study were listed in (Table 1). Table 1 shows that the highest mean value of microleakage among all subgroups was recorded within subgroup (A1), which represent the crowns with no marginal cement space luted with resin-modified glass ionomer cement (2642.65 ± 463.69), while the lowest mean value was recorded in the subgroup (B3) which represent the crowns with 25μm marginal cement space and looted with adhesive dual-cure cement (208.04 ± 35.56). Furthermore, for group (A), which represents crowns with no cement space, subgroup (A1) recorded the highest mean of microleakage (2642.65 ± 463.69), while the lowest mean value of microleakage was recorded within subgroup (A3) (698.27 ± 72.26).

Table 1: Descriptive statistics of the microleakage of different groups measured in μm.

Table 2: Bonferroni test for comparison of microleakage among the different subgroups.

When the marginal cement space was set zero in the designing software and the radial and occlusal cement space were set 80 μm starting 1mm above the finishing line, as the crown approaches the final position, there is no space for escapement of the cement through the marginal cervical collar. The closing angle between the tooth preparation and the restoration becomes smaller, the flow of the cement is restricted and its escapement becomes more difficult [13]. Furthermore, frictional resistance and hydraulic pressure development may lead to incomplete crown seating.

The marginal seal may be affected by the marginal fitness of the crown, as it will affect the amount of luting agent exposed to the oral environment [14]. Inadequate crown seating results in an increased thickness of the cement layer within the crown. Some authors revealed that increasing the resin cement thickness could reduce the bond strength because a thicker cement layer results in higher polymerization shrinkage that creates greater stress at the adhesive interface and leads to gaps formation [15].

Hammood and Ibraheem [11] reported that RelyX Ultimate showed lower marginal and internal gaps than RelyX U200 and Riva Luting Plus luting, which can be explained by its higher flowability and lower viscosity that resulted in better adaptation. Furthermore, microleakage and adhesive performance are strongly connected. Microleakage could lead to failure of adhesion, and weak adhesion could lead to microleakage [16].

Riva Luting Plus RMGI cement showed higher microleakage than both resin cements. This can be explained by the several differences between RMGI cements and resin cement, including their lower bond to tooth structure [7], lower bond to zirconia [8], shrinkage/expansion [6] and thermal coefficient [5].

The results of this study are in agreement with [3, 14, 19]. On the contrary, a study reported more bacterial microleakage in crowns luted with resin cement than crowns luted with RMGI cement [20]. This could be explained by the antimicrobial action of fluoride ion released from RMGIC that may had reduced the bacterial microleakage or may be due to the use of different testing methods.

This may be explained by the fact that multistep etch and rinse adhesive resin cements present higher immediate and long-term bond strength than simplified all-in-one self-adhesive cements [21], as adhesive resin cement have the ability of formation of a hybrid layer with an excellent quality which ensures adhesion and resistance to various stresses. Furthermore, a dentine bonding agent also has the capacity of sealing the cut dentinal tubules. Although conventional resin cements are more technique sensitive, they are more capable of interpenetrating the demineralized dentine [21].

This could be partly explained by the strong etching and resin infiltration of the etch-and-rinse adhesive resin cement with subsequent hybrid layer formation, which can result in stronger micromechanical bonding to the tooth structure and low microleakage scores. Furthermore, bonding agent’s application to the dentine before applying the cement enables the formation of dentine bond before the polymerization shrinkage of the luting cement occurs. This may decrease the chance of the formation of gaps [22].

On the other hand, the weaker adhesion of the selfadhesive resin may be due to several reasons; the selfadhesive cements are unable of true hybrid layer formation, a shallow, irregular and deficient hybrid layer was formed [23]. Furthermore, no distinct dentine demineralization or hybridization had been observed by Rely X Unicem. The bonding mechanism is similar to glass ionomers with an intermediate interfacial layer incorporating partially dissolved smear layers [24]. This can be explained by its reduced dentinal infiltration due to its low demineralization ability; the formation of the inadequate hybrid layer is influenced by the increase in its viscosity, despite its high initial PH [25].

Furthermore, the chemical composition of the cement plays an important role, where adhesive resin cement is more hydrolytically stable as opposed to the selfadhesive resin cement that incorporates acidic monomers in its chemical formulation to be capable of etching the tooth structure [26]. These acidic monomers are hydrophilic and result in increased water sorption, which in turn mediate hydrolytic reactions at the adhesive interface, thereby compromising adhesion to tooth structure [27].

Simplified self-adhesive resin cement is characterized by a low degree of conversion as opposed to etch-and-rinse adhesive-based resin cement. This leads to increased microleakage as a consequence of leaching out of the residual monomer and ingress of the oral fluids through the created micro gaps [28]. This may be caused by the acidic monomer, which consumes tertiary amines in some cements, resulting in incomplete polymerization, leading to a reduction in bond strength.

An additional issue regarding the simplified self-adhesive resin cement is its pH neutralization behaviour. Upon mixing and manipulation, these cements have low PH, which is an essential feature for the adhesion to the tooth structure. Cement with inadequate Ph neutralization after self-curing can reduce the mechanical properties, thus affecting the long-term adhesion [25].

Results of the present study are in agreement with [1, 16, 29]. Contrary to this, [30] reported that self-adhesive cement showed the lowest microleakage scores. However, this can be explained by the use of different crown and luting materials and different test conditions.