Background: oral cavity soft tissue lesions represent a wide range of entities with the majority of them being reactive in nature. This study aims to describe the clinicopathological features and prevalence of different soft tissue lesions that affect the upper jaw. Materials and methods: data for this study was collected from the histopathology files for patients with a diagnosis of soft tissue lesions affecting the maxilla from 2010 to 2020. Data were collected with respect to gender, age, origin, and site. Result: 348 cases were identified. 260 cases were non neoplastic, of which reactive conditions were the most common disease subcategory 216 (83%) and pyogenic granuloma (110, 42.3%) followed by peripheral giant cell granuloma (45, 17.3%) were the most common diagnose. 88 cases were neoplasms, most cases were malignant in nature 48 (54.5%) and the most common diagnosis was squamous cell carcinoma (38, 43.2%) while the most common benign tumors were giant cell fibroma (9, 10.2%) and neurofibroma (9, 10.2%). Conclusion: the demographic characteristics of soft tissue lesions in maxilla are similar to that seen in other parts of oral cavity; reactive conditions are the most common lesions and squamous cell carcinoma is the most common malignancy. True mesenchymal tumors are generally rare in oral cavity however they showed equal frequency to epithelial tumors in maxilla which pose a challenge and require careful assessment when approaching the diagnosis in this location.

Maxillae are bones that join to form the upper jaw. Each maxilla consists of a body and four processes, namely: the frontal, zygomatic, alveolar and palatine processes [1]. A wide variety of diseases can affect the maxilla ranging from reactive to neoplastic conditions. Bone pathologies are more commonly encountered than soft tissue [2]. In general the majority of soft tissue lesions of oral cavity are reactive in response to local chronic trauma. Most soft tissue neoplasms are epithelial in origin with squamous cell carcinoma (SCC) accounting for the majority of cases [3]. On the other hand tumors of mesenchymal origin are rare [4]. This study aims to describe the clinicopathological features and prevalence of various soft tissue lesions affecting the upper jaw.

The data was collected from the histopathology archives of nine hospitals in the city of Baghdad during the period (2010 – 2020). The inclusion criteria were any histopathology diagnosis of a soft tissue lesion affecting the maxilla.

The following variables were recorded: (diagnosis, age, gender and site). In relation to the anatomic site, lesions were divided into three sites based on the clinical findings; anterior from right canine to left canine, posterior from first premolar to maxillary tuberosity and palate. The side was also divided into right, left, crossing the midline and bilateral (affecting both sides).

The lesions were classified into two main groups; non neoplastic and tumors or tumors like lesions which include both benign and malignant tumors and according to origin into epithelial and mesenchymal. Further subcategories were assigned such as reactive, developmental, infections, peripheral nerve sheath tumors, vascular tumors, smooth muscle tumors, skeletal muscle tumors, adipose tissue tumors, etc.

Infections: actinomycosis, noma, tuberculosis (one case of each)

Table1: The frequency and distribution of non neoplastic maxillary soft tissue lesions according to gender and age.

Figure1: the frequency and distribution of non neoplastic disease subcategories and according to gender

Table2: The frequency and distribution of maxillary soft tissue tumors and tumors like lesions according to gender and age. 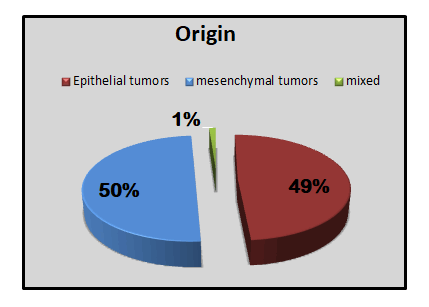 Figure2: Piechart showing the distribution of maxillary soft tissue tumors and tumors like lesions according to origin. 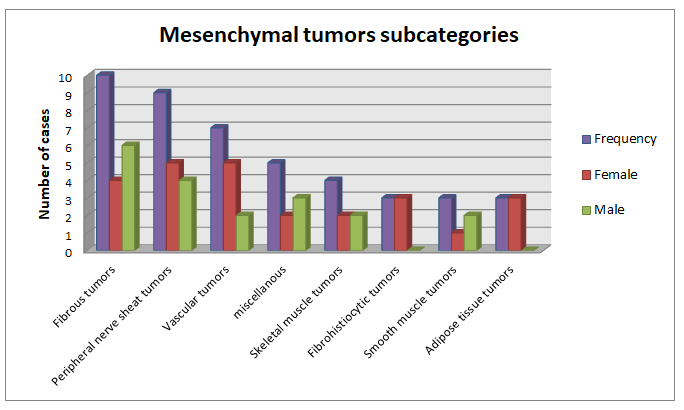 Figure3: the frequency and distribution of mesenchymal tumors according to subcategories and gender.

Pyogenic granuloma was the most common diagnosis in this group. The main affected site was the anterior gingiva. The site, predominance among females and age distribution is consistent with previous studies [5]. The high prevalence in female patients especially during pregnancy is well documented in literature, a previous study on those lesions demonstrate no increase or difference in number of estrogen receptors on endothelial cells compared to controls; however more expression of endothelial growth factors, other angiogenesis factors and fewer inhibitory factors was noted and it might play a role [8]. Although there is a debate regarding the nature of this lesion; our study followed the WHO classification of head and neck 2017 and since most of the cases occurred in anterior gingiva; this lesion was included in the reactive category.

In regard to neoplasms; Malignant tumors were more than benign with squamous cell carcinoma being the most frequently diagnosis and the most common malignant tumor of the maxilla. This may be related to the increasing prevalence of tobacco smoking and alcohol drinking as it is becoming more popular in our conservative country. Although most studies often used data from oral squamous cell carcinoma with no specific regard to localization, few studies were found that focused on SCC of the hard palate, maxillary gingiva and alveolar mucosa. Those previous studies reported a mean age of (73, 71, 66, 64, and 67) years respectively, while our study mean age was 62 years with the majority of cases reported in patients older than 70 years old that is similar . Females were slightly more affected in contrast to but similar.

In regard to benign tumors, giant cell fibroma and neurofibroma were the most common tumors. A mean age of 40 years was found in neurofibroma which is similar to previous studies that reported a mean age of (38.5 and 40) years respectively and females were slightly more affected that is similar with Campos et al but disagree with Tamiolakis et al.

Giant cell fibroma is a lesion with unknown etiology that doesn’t appear to have a relation with chronic irritation and thus was designated in this study as a tumor like lesion. A male predilection was noted (M:F ratio 2:1), other studies had reported slight female predilection or no gender differences. However their results had also shown that lesions affecting palate or upper gingiva were more likely to affect male patients which support our finding.

The demographic characteristics of soft tissue lesions in maxilla are similar to that seen in other parts of oral cavity; reactive conditions are the most common lesions and squamous cell carcinoma is the most common malignancy. True mesenchymal tumors are generally rare in oral cavity however they showed equal frequency to epithelial tumors in maxilla which pose a challenge and require careful assessment when approaching the diagnosis in this location.