Microbial Contamination of Toothbrush Bristles among Gingivitis and Periodontitis: An in vitro study

Bacterial plaque in the vicinity of gingival margin has been emphasized to play a potential role in the pathogenesis of periodontal disease; Regular removal of supragingival plaque has been shown to reduce counts of pathogenic species [1]. Mechanical plaque control is done by toothbrush and interdental aids. Our study was done with mechanical plaque control such as toothbrush. Plaque control is important for maintaining oral hygiene. Mechanical plaque control can be done at home. Tooth brush is an efficient tool for removing the oral biofilm and therefore the soft debris out of the mouth, especially from the tooth and tongue surfaces, is that of the toothbrush. Choice of tooth brush isn't important but the care and maintaining of the toothbrush are important for the good oral hygiene and health also, toothbrush isn't the perfect environment for microorganisms’ growth, it's capable to get microbes from plaque and calculus in mouth .Oral hygiene is an important practice for healthy living. The first devices utilized in cleaning the teeth include the twig brush, tooth stick, also referred to as the toothpick, and plantain stalk with charcoal [2]. Microbial contamination of toothbrush bristles occurs after use and increase of microbial load [3,4]. The microbes that contaminate toothbrush bristles originate from oral cavities and moist environment [5]. The biofilms that develop within the toothbrushes contain different bacterial species [6], viruses [7] and fungi [8,9] that are present within the mouth, also as some from the environment. The maintenance of toothbrushes are of enormous importance for bacterial survival: toothbrushes which are kept in rooms with open air have less bacteria than those which are kept closed, and therefore the bacterial growth is 70% higher in a wet and guarded environment. The wet environment within the bathroom, where toothbrushes are usually kept, may facilitate the bacterial growth and therefore the crossed contamination. The aerosols produced during flushing in lavatories, carries E.coli and Pseudomonas [10]. Plaque control is important for maintaining oral hygiene. Mechanical plaque control can be done at home. Tooth brush is an important factor which has been used daily to reduce plaque accumulation. As tooth brushes were used regularly more number of microorganism harbour in toothbrush bristles. Proper maintenance of tooth brush helps in reduction of plaque and prevent from periodontal disease. Previously we worked on plenty of topics in periodontics [11-26]. And now the current study was done to identify the differences in microbial contamination in toothbrush bristles between gingivitis and periodontitis subjects.

Patients visited the Department of Periodontics in Saveetha dental college were included in this study in which ten patients' tooth brushes were collected, were from both sexes male and female. Toothbrushes were collected from Gingivitis and periodontitis subjects. In which 5 toothbrushes were collected from gingivitis and 5 toothbrushes were collected from patients with periodontitis. Inclusion criteria gingivitis patients, periodontitis patients who were under 1st dental visit before phase 1 therapy and exclusion criteria patients who have undergone periodontal therapy, patients under periodontal treatment. The study was approved by the institutional review board and ethical committee. Informed consent was obtained from all participants before commencement of the study. The study was done in BRULAC department of Saveetha University. The samples (Toothbrush bristles) were collected in a sterile container with 10 ml brain heart infusion agar is a growth media for microorganisms which is used in culture. The plates were stored in a bacteriological incubator at 37° C for a period of 24 hours for microbial growth analysis. After 24h growth the colony-forming units (CFU) were counted and subsequent microorganisms identification. Total numbers of microorganisms were determined in each plate. Each plate containing microorganism was counted and estimated in Total viable count (TVC) gives quantitative estimation of bacteria, number of colony forming units (CFU/ml). Figure 1. This figure shows the number of bacterial colonies formed from toothbrush samples obtained from gingivitis and periodontitis patients. 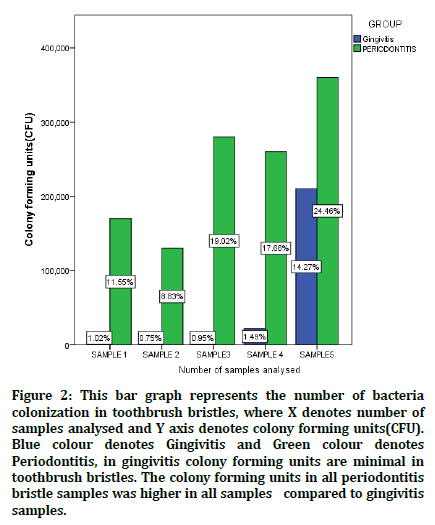 After 24 hours colony forming units were assessed in gingivitis patients and periodontitis patients which shows patients with periodontitis patients has higher amount of colony formation units in toothbrush bristles compared with gingivitis patients has lesser number of colony forming units. In our study patients with gingivitis and periodontitis were selected who visited first time for dental treatment. Gingivitis and Periodontitis occurs due to accumulation of plaque and calculus study. The result was colony forming units in gingivitis was in concurrence without values but no direct comparison is possible since they have compared healthy against gingivitis. The toothbrush contamination among healthy individuals occurs earlier after the primary use, and increases with its further usage [27,28]. Oral cavity harbors highest concentrations of various microbial populations (more than bacterial 700 species’, from which 400 are found within the periodontal pockets [29]. The alpha haemolytic streptococci have periodontal pathogen potential; can prevent the colonization of the more pathogenic species’, also as viridans streptococci which may have a role due to the expansion inhibition of the periodontal pathogens [30]. The microorganisms get locked across E.coli [29]. The contaminated toothbrushes harbour pathogenic bacteria that cause local and systemic infections. Thus can serve as potential sources of various systemic conditions, like heart diseases, arthritis, bacteremia and brain stroke. Immuno compromised patients organisms are more prone to super infections, like multiple drugs resistant Enterococcus faecalis and enteric gram negative species’, Pseudomonas and Candida albicans, in gediadrtic patients excessive antibiotic overload [3]. Evidence shows that toothbrushes from both healthy patients and patients with oral disease had both potentially pathogenic bacteria and viruses such as Staphylococcus aureus, E. coli, Pseudomonas, and herpes simplex virus. The inflammatory bowel disease patients responded well to treatment after replacement of the contaminated toothbrushes once they replaced the used toothbrushes with new ones [4]. The different microorganisms could grow on toothbrushes after its usage [27]. The bacteria that adhere accumulate and survive on the toothbrushes, could also be transferred across to the individuals, thus spreading the disease [5,31]. The fluids and food debris accumulate in the spaces between tufts by capillary action; and serve as nidus for bacterial growth [32]. The toothbrushes when kept in closed containers are safer than exposed surfaces which have higher bacterial counts [33]. Retention of moisture and oral debris within the bristles enhanced bacterial survival [7]. Bacteria get entrapped within the bristles and enhance bacterial survival (aerobic versus anaerobic), toothbrush design also plays a significant role [9]. The toothbrush can act as a reservoir for microbial colonization. Advances in therapeutic strategy for treatment of periodontal disease should not underestimate the value of mechanical plaque control. The study limitations are smaller sample size and periodontal pathogens harboring the bristles also should be assessed with a larger sample. As per the saying prevention is better than cure, simple maintenance of not only oral but also the tooth brushes plays a significant role in local and systemic wellbeing.

There were no conflicts of interest as defined by the authors.