The knowledge of variant formation of brachial plexus and its branches are important for the surgeon and orthopedician pertaining to trauma and surgical procedures of the upper extremity. Current study was aimed to report variations in the formation of the median nerve with relation to the brachial artery. And also, the variation in the branching pattern of Musculo Cutaneous Nerve (MCN). Careful observation was made to note the formation and branching pattern of Median (MN) and Musculo Cutaneous Nerve (MCN) with the relation of axillary and brachial artery of formalin embalmed cadaver. In the present study, we noted the MN thus formed by 2 roots; lying behind the brachial artery. The coracobrachialis muscle was innervated by the direct branch from the lateral cord of brachial plexus. Unusual variant in the formation of median nerve in relation to the brachial artery may be important diagnoses to neurologist and surgeons.

Brachial plexus is a group of nerves which innervates the muscles of the back and the upper limb. The ventral rami of the lower four cervical (C5,C6,C7,C8) and first Thoracic (T1) spinal nerves unite together and form the plexus [1]. The lateral cord is formed by the anterior divisions of the upper and middle trunks and the anterior division of the inferior trunk continues as a medial cord. From the Lateral Cord (LC) there are three branches arises they are, Lateral Pectoral Nerve (LPN), Musculocutaneous Nerve (MCN) and lateral root of median nerve. The LPN supplies the pectoral muscles. The MCN pierces the coracobrachialis muscle and also innervate the three muscles of the arm. The lateral root of median nerve (roots C5, C6 and C7) and medial root of median nerve (roots C8 T1) join to form the median nerve. These two roots are joins anterior to the axillary artery. Then it’s decent down word lateral to the axillary artery. In the middle of the arm, it runs medial to the brachial artery [2].

But in the present study the MCN is not piercing the coracobrachialis muscle; neither the lateral and medial roots are not encircling the axillary artery. The MN formed by encircling profunda brachial artery lying posterior to the brachial artery.

Purpose of this study to highlight the variant formation of MCN and MN its relation with brachial artery. These variations are more vulnerable during the surgical producers of axilla and upper arm. Complex nature of the brachial plexus and its relation with brachial artery has been interesting area for the anatomists as well as for clinicians. So, this observation will be use full for orthopaedic and vascular surgeon.

During routine dissection, an abnormal formation of MN and different branching pattern of MN was observed incidentally in left upper limb of a 55 years old male cadaver assigned to the anatomy department of the Sree Balaji Medical College and hospital, Chennai.

The course and branching pattern of the MN and MCN in the arm and fore arm were carefully dissected.

Variation in formation of MN and MCN were documented and appropriate photographs were taken (Figure 1). 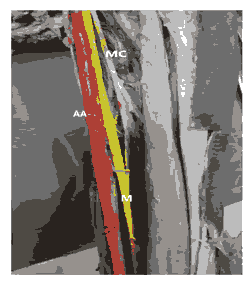 The MNC divided into three branches innervating the brachialis and biceps brachii muscle of the arm. It also communicates with the median nerve by an oblique branch. In the forearm and hand the course and branching pattern of the two nerves was normal. Thebranching pattern and course of the median and musculocutaneous nerve were normal in right side in every aspect

Experts found an unusual variation in MCN nerves in 6.25% cases and its absence has been reported with prevalence ranging from 1.7% to 15% [4]. Absences of the MNC have been described in many reports and experts reported these variations in 65% of the population [5]. But in our case the coracobrachialis muscle was supplied by the direct branch from the lateral cord. Brachialis and the biceps brachii muscle were supplied by the MNC.

According to expert, the MNC sends an independent branch to the coracobrachialis muscle instead of perforating [6].

The remaining branches of the nerve runs parallel to the MN by a variable distance until it pass under the biceps brachii. In our study instead of piercing the coracobrachialis muscle, the nerve adheres to the median nerve for some distance down in the arm and has several branches, passes between the biceps and brachialis muscle to supply muscles.

The present variation should be considered when the MN lying behind the brachial artery. It is encircling the profunda brachial artery. Moreover, knowledge of these variations is important in performing anaesthetic block to brachial plexus or in surgical procedures in the neck and upper arm region.