The femur bone is the thigh bone which extends from the hip to the knee. It serves as an attachment point for all the muscles that exert their force over the hip and knee joints. The femur bone has 2 joints, the medial condyle and the distal condyle which has its specific length and breadth. The medial condyle is larger than the lateral condyle due to more weight bearing caused by the centre of mass being medial to the knee. The aim of the present study is to analyze the morphology and morphometry of condyles of femur and its clinical implication. The digital vernier calliper is used for the measurement of the condyles of femur bone. For this study, 36 femur bones were used from the department of anatomy of Saveetha dental college. The results revealed that there was a difference in dimensions of the right and the left femoral condyles. The present study thus concluded that prior knowledge of this morphological data might be useful in performing surgical procedures and many other studies.

Generally, the bicondylar width as well as the medial and lateral condylar depths of the femur are important parameters for the design of total knee prostheses. And in this study, both the morphology and morphometry of the condyles of femur is also studied. The lateral condyle depth of the femur has been associated with osteoarthritis, but it remains unclear whether the increased depth of the lateral condyle is a predisposing factor or the effect of knee osteoarthritis.

Recent studies have shown that gender differences of distal femur morphometry depend on other morphometric measurements of femur, such as the femur length and width. The knee joint is a complex synovial joint consisting of the tibiofemoral and patellofemoral articulations [7]. It functions to control the centre of body mass and posture in the activities of daily living [8]. Most of the morphometric large sample size studies of the distal femur include measurements on radiographs, computerized tomography, or magnetic resonance imaging. The femoral condyles have many dimensions which can be measured, which are the bicondylar width, the diameter of the intercondylar notch, etc. [9].

This study was conducted in the department of anatomy, saveetha dental college, Chennai. A total of 36 femur bones were used for the research study, among which 18 were right femur bones and 18 were left femur bone. The damaged femur bone was removed from evaluation. The measurements of the condyles of the femur bone such as the length and the breadth were measured using the instrument 'vernier caliper’. The observed data was analysed statistically. 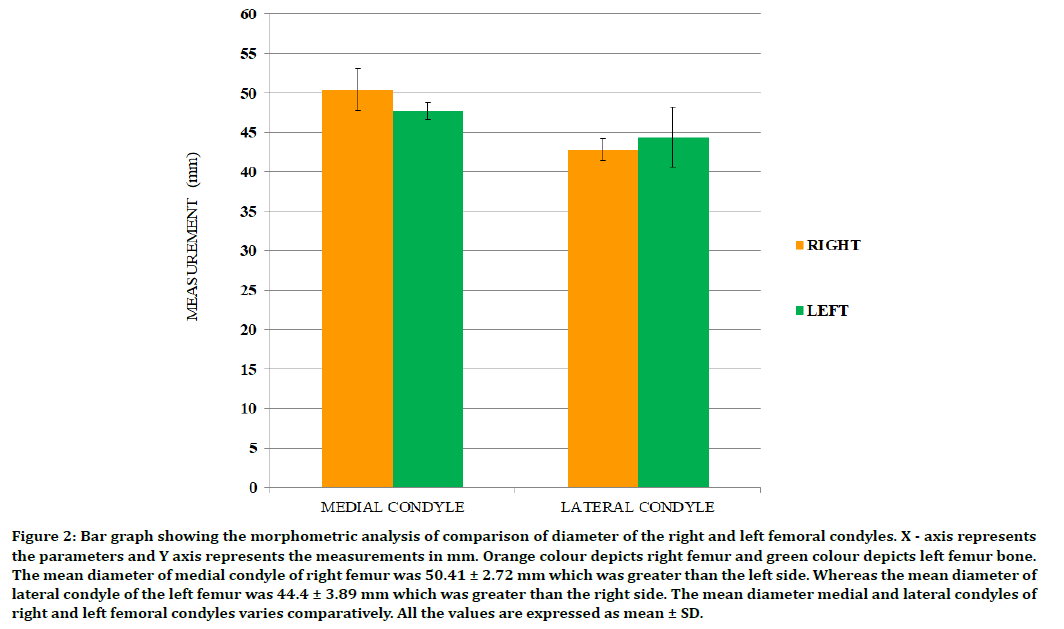 Figure 2. Bar graph showing the morphometric analysis of comparison of diameter of the right and left femoral condyle s. X - axis represents the parameters and Y axis represents the measurements in mm. Orange colour depicts right femur and green colour depicts left femur bone. The mean diameter of medial condyle of right femur was 50.41 ± 2.72 mm which was greater than the left side. Whereas the mean diameter of lateral condyle of the left femur was 44.4 ± 3.89 mm which was greater than the right side. The mean diameter medial and lateral condyles of right and left femoral condyles varies comparatively. All the values are expressed as mean ± SD.

If the age of the person is more than 60 years, the chances of the femoral displacement may also occur due to the minor accidents or injuries as well. Since the demur is a bone, a normal level of calcium is also required in a person’s body for the strong bone development [30]. Even the type of the diet we follow also plays a major role in the maintenance of a healthy bone. And the femur bone, it is a place where the main weight of the body resides as the age increases.

The knowledge about the condyles of femur provides the age differences observed in the condyles and also it differs in the gender of the person. The major clinical implication is seen or observed when a person is facing an accident while sky diving or jumping from a long distance. There can be clinical issue when the person is very obese and the whole weight of the person may fall on the person’s knee and may damage the femur bone.

The authors declare that there are no conflicts of interest in the present study.