Introduction: Lung function reference value is dependent on several factors such as age, gender, ethnicity, environmental conditions as well as the altitude of their dwelling habitat. Therefore, optimizing the reference values of Peak expiratory flow rate (PEFR) to suit different population groups is important to establish the normal range. The present study was conducted to determine the normal reference range of PEFR using a validated Peak flow meter among healthy adult individuals of Central Kerala and to derive regression equations for predicting normal PEFR in this population. Materials and methods: Individuals between the age of 15 and 69 years were initially screened with a pre-designed questionnaire that included health and demographic parameters. Only those individuals who were found to be in good health status were recruited for the study. PEFR was measured using a Peak Flow Meter having a European Union scale and Height was measured using a standard wall mount stadiometer. The regression equations for predicting normal PEFR were calculated from the observed values using multiple regression analysis. Results: A total of 1276 volunteers were included in the study as per the inclusion and exclusion criteria. The PEFR value had a strong association with age, gender, and height. It was observed that there was a linear relationship between height and PEFR in both males and females. The reference equations incorporating age and height in both the genders were as follows: PEFR in males=41.05 - (3.5 x Age)+(333.7 × Height in cm) PEFR in females=-213.8 - (1.3 x Age)+(430.3 × Height in cm) Conclusion: In this study, by using a validated peak flow meter, we derived the regression equations to predict the normal PEFR in the adult population in Central Kerala.

Peak Expiratory Flow Rate (PEFR) is the simplest ventilatory function test that can measure airflow limitation [1]. It has proven as a valuable adjunct in the evaluation and management of patients with common airway diseases like Bronchial Asthma or Chronic obstructive Pulmonary Disease [2-4]. However, the reference values for PEFR are highly variable and depend on several factors like age, sex, ethnicity, physical activity, environmental conditions, dwelling altitude, tobacco smoking, and socioeconomic status [5-8]. Regional differences in lung functions in healthy individuals in the Indian sub-continent have been observed in several studies [9-15]. Therefore, optimizing the reference values of PEFR to be appropriate for different population groups is important to establish the normal range to be expected for a healthy person from that representative group is indeed desirable. Additionally, predicting the PEFR values according to age, height, and sex, and applying it to the clinical practice will eventually empower the treating physician to manage patients with respiratory diseases like Bronchial Asthma (BA), Chronic Obstructive Pulmonary Disease (COPD), or Occupational lung diseases [2,3,16-18]. In this context, the present study is aimed to estimate the normal reference range of PEFR using a calibrated peak flow meter in healthy adult individuals of Central Kerala and to derive regression equations for predicting normal PEFR from the obtained values.

The study was designed as a single-centre, hospitalbased, cross-sectional, observational study and was conducted at the Department of Emergency Medicine, Pushpagiri Institute of Medical Sciences, Tiruvalla, Kerala. The study protocol was approved by the Institutional Ethics Committee. The sample size was calculated based on previously conducted study results, using the following statistical formula:

From the study conducted by Ray et al, assuming a mean PEFR of 400L/minute and a standard deviation of 80L/min along with a confidence limit of 25L/min and an alpha error of 5%, the sample size is 40.96 [13]. Therefore, we decided to include 50 samples in each age category for both males and females. The study was completed over a period of 18 months from March 2015 to August 2016. Individuals aged greater than 15 years who were apparently healthy with no history of smoking and residing in Central Kerala were included in the study (mainly the attendees and visitors of the patients who registered in the Emergency Department of the hospital). A pre-designed questionnaire was used to document relevant information such as age, sex, occupational exposure, environmental exposure, medical and treatment history. They were then subjected to clinical examination to rule out any abnormalities contributing to low PEFR. Exclusion criteria included subjects with pregnancy, morbid obesity, current or past history of smoking, history of dyspnoea on exertion, wheeze, acute or chronic cough, structural abnormalities of thoracic cage/spine, respiratory tract infection within the previous two weeks and those who were consistently unable to perform the procedure. Height measurements were taken by using a standard wall-mounted stadiometer and values were recorded in ‘cm’. Weight was measured using an electronic weighing scale which was calibrated each day, using standard weight. From the measured height and weight, Body Mass Index (BMI) was calculated. PEFR was measured using a Peak Flow Meter having a European Union scale using the standard protocol and clear instructions from the investigators. The highest PEFR value from the three correctly performed manoeuvres was taken as the final value. The Peak Flow Meter was calibrated initially with Vitalograph Pneumotrac™ Spirometer (Model 6800) and thereafter on all days of the study.

All data were entered into MS EXCEL and then analyzed with the help of SPSS (Statistical Package for Social Sciences) version 17.0. Using these data, a regression equation was obtained for both males and females which is depicted in the form of tables, figures and diagrams wherever necessary.

A total of 1276 subjects participated in this study, out of which 609 (47.7%) were males and 667 (52.3%) were females. The subjects were divided into 11 groups based on age and in each age group, there were more than 50 males and 50 females. Table 1 shows the age and gender distribution of the study sample.

Correlation of PEFR with age and height 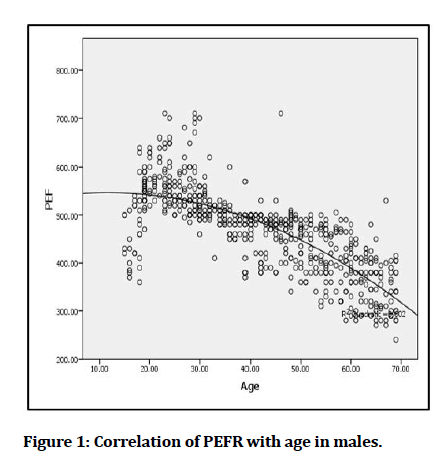 Figure 1: Correlation of PEFR with age in males. Figure 2: Correlation between PEFR and Age in females. 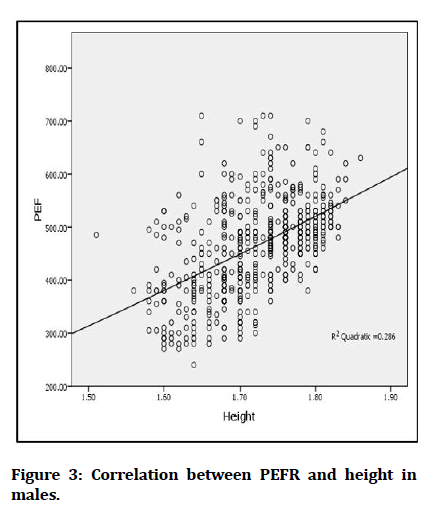 Figure 3: Correlation between PEFR and height in males. 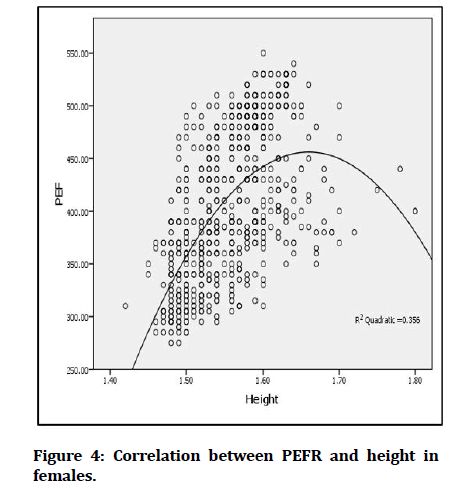 Figure 4: Correlation between PEFR and height in females.

β0, β1 and β2 in this equation are the regression coefficients.

The regression equations obtained for predicting PEFR values in males is as follows:

The regression equations obtained for predicting PEFR values in females is as follows:

This study has aimed to find out the normal reference range for PEFR in the healthy adult population in central Kerala as our hospital caters to patients predominantly from this region. A total of 1276 individuals with good health (based on the questionnaire as well as clinical examination) have participated in this study.

Like the findings in a study done by Nunn AJ et al among the European population, we have also observed a significant correlation between PEFR and age.19 It is observed that there is a decrease in PEFR by 2-3L/min with every one-year increase in age. In males, PEFR value trends upwards at a younger age, reaches a peak by the early 3rd decade, and then decreases serially with advancing age. In females, PEFR shows an increasing trend till the early half of the fourth decade and from the latter half of the fourth decade, there is a progressive decline with advancing age.

In the current study, there is a statistically significant correlation between height and PEFR also. It is observed that with the increase in height by every 1 centimeter, the PEFR value increases by 4-5L/min. This finding is in parallel to the results of the study done by Kodgule RR et al. 15 Thus, from the current study, it is evident that age, gender, and height are the most important determinants of PEFR which is in accordance with existing evidence from previous studies.

Table 3:Comparison of age with predicted PEFR between equations from different studies.

Table 4: Comparison of height versus predicted PEFR between equations from different studies.

In India, the current practice is to use 90% of the European Community for Coal and Steel (ECCS) equation, derived for the European population, as the reference values for the spirometry parameters. However, our study suggests that the lung function values of the South Indian population are different from that of Europeans, which implies that the arbitrary application of the correction factor of 90% needs to be reconsidered [21]. We hope that the derived regression equation from this study and the predicted PEFR values so obtained can be a useful tool in the Physician’s armamentarium to evaluate and effectively manage common airway diseases like Bronchial Asthma and Chronic Obstructive Pulmonary Disease on our part of the country.

In the current study, before obtaining the PEFR measurement, a physical examination was done to eliminate any underlying confounding factors which might contribute to reduced PEFR values. Thus, the derived regression equation for PEFR from our study may be more accurate compared with the previous studies, hence may be used in day-to-day practice.

This study has many limitations. First, this study has been conducted as a single-centre, hospital-based study, and hence, the study population may not be truly representative of the community. The sampling method used in the present study was consecutive sampling, which might have caused a minimal sampling bias also. Lastly, an objective quality criterion for the measured PEFR values was not there, and it might have reduced the reliability of the obtained PEFR values.

In this study, by using a well-calibrated peak flow meter, we derived the regression equations for predicting normal PEFR in the healthy adult population in Central Kerala. The reference equations obtained are as follows: