Osteoma is a benign osteogenic tumour, commonly involving the craniofacial bones. It is characterized by excessive proliferation of cortical or cancellous bone. It can be of the central, peripheral or extraskeletal variety. Peripheral osteoma arises from the periosteum and is usually asymptomatic, however, can attain large size in the involved bone. In this paper, we report two cases of peripheral osteoma and review the literature related to the pathological condition. Two patients reported with a chief complaint of asymptomatic slow-growing swelling over the mandibular body region. Radiographic examination revealed a lobulated pedunculated radiopaque mass. It was excised surgically, and no recurrence was noted on follow-up visits. Osteoma involving the jaws is not common and can be associated with Gardner’s syndrome thereby requiring regular follow-up and thorough examination. Surgical excision is the treatment of choice and recurrence is rare.

Osteoma is a benign lesion composed of mature bone with a predominantly lamellar structure [1]. Its Incidence ranges from 0.4% to 4% [2]. It can be classified according to the site from which it arises, into central type i.e. arising from the endosteum, peripheral type which arises from the periosteum or the extra skeletal type when present in the soft tissue. Osteomas most frequently involve the craniofacial bones and is the most common benign tumour of the paranasal sinuses [1,3]. Frontal sinus is most involved followed by ethmoid, maxillary and sphenoid sinuses. Other sites most involved are the external auditory canal, orbit, temporal bone, pterygoid plate, and jaw bones. Involvement of the jaws is less frequent and when involved, mandible is more common than maxilla. Clinically, it is a slow growing, painless swelling but can cause significant facial asymmetry. The purpose of this paper is to report two cases of osteomas involving the mandibular body and present a review of the literature.

Case report 1: A 35-year-old male patient reported to our unit with a chief complaint of a swelling in the left back region of the jaw for 4 years. Patient initially noticed a peanut sized swelling which gradually increased in size with no history of trauma or infection or associated symptoms. Patient sought medical consultation after he found it to be cosmetically disfiguring. Clinically, a well-defined extra-oral solitary swelling, measuring approximately 1cm x1 cm in size, extending infer-superiorly, from the inferior border of the mandible to 1 cm inferior to the line joining the tragus to the corner of the mouth was noted. On palpation, the swelling was bony hard, ovoid, non-tender, well defined and noncompressible. Overlying skin appeared normal. Intraorally, a well-defined solitary swelling was noted in the left lower vestibule extending from 35 to 37. Review of systems revealed no significant abnormalities.

Orthopantomography revealed a solitary ovoid well defined radiopaque mass in the left posterior mandibular region which was not involving the apices of the teeth or the inferior alveolar canal. The lesion was surgically excised under general anesthesia.

Case report 2: A 37-year-old male reported to us with a chief complaint of swelling in the lower left front region of the jaw for 9 years. It was insidious in onset and asymptomatic. Extra oral examination revealed a well-defined swelling on the left mandibular body region measuring 3 cm x 2 cm. It extended antero-posteriorly from the commissure of the mouth to 2 cm posterior to it. Infero-superiorly, it extends from the lower border of the mandible to 1 cm below the ala tragus line. On palpation, the swelling was well circumscribed, ovoid, lobulated, bony hard, non-tender, non-compressible. Overlying skin appeared normal. It was fixed to the underlying bone and non-fluctuant. No regional lymphadenopathy was palpable. Intraorally, the swelling extended from 34 to 37 region with vestibular obliteration. Overlying mucosa showed no signs of inflammation. Deep occlusal caries was seen with 36. Occlusal radiograph and orthopantomography showed two lobulated radiopaque masses arising from the buccal surface of mandible from 35 to 37 region (Figures 1 and 2). Computed Tomography showed a welldefined lobulated hyper dense lesion measuring approximately 2.5x 1.5x 1.7 cm attached to the lateral margin of the body of the mandible. Complete excision of the lesion was done under general anesthesia via an intraoral approach (Figures 3 and 4). Histopathological examination showed dense, compact bone with Haversian canal and bone trabeculae of mature bone with paucicellular fibrous stroma.

Figure 3. Intraoperative exposure of the osteoma after raising mucoperiosteal flap. 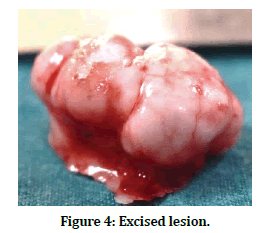 Osteoma was first described by Jaffe in 1935. It is a rare, benign, osteogenic tumour characterized by proliferation of compact or cancellous bone. Occurring less commonly in jaw bones, it accounts for 12.1% of benign bone tumours and 2.9% of all the bone tumours. It shows no age predilection with a slight male predilection [3,4]. We investigated the cases of peripheral osteoma reported in literature. The review conducted by K. Osawa et al. [5] along with our research, reports a total of the 120 cases of osteoma of the mandible till date (Table 1).

Table 1: Total number of cases involving the mandible reported in the English literature according to its site of occurrence.

Various theories have been implicated in the etiopathogenesis of the lesion: developmental anomaly, neoplastic entity or reactive lesion owing to trauma/local infection [6]. As it is most found in adults, developmental anomaly is least likely implicated for its occurrence. Also, it is slowly growing tumour, and hence cannot be considered neoplastic. Kaplan et al. considered it to be reactive lesion occurring due to a combination of trauma and muscle traction [7]. Trauma may cause sub-periosteal bleeding or oedema and the muscle traction could locally elevate the periosteum. These two factors initiate an osteogenic reaction that could be perpetuated by the continuous muscle traction in the area. The fact that most osteomas do not reach a considerable size also supports the theory of a reactive lesion. Differential diagnosis includes exostoses, osteochondroma, osteoblastoma, osteoid osteoma, peripheral ossifying fibroma and paraosteal sarcoma. Exostoses appear lingually and its growth is stabilized after puberty. Osteoblastoma and osteoid osteoma are rapidly growing tumours causing significant pain and disfigurement. Peripheral ossifying fibroma, commonly seen in the maxilla, is a rapidly growing tumour occurring in the younger age group. Histological features of osteoma include presence of compact cortical bone with scanty intervening fibrovascular stroma. There may be a peripheral rim of dense sclerotic lamellar bone surrounding trabeculae of lamellar or occasionally woven bone separated by fibrofatty vascular tissue [1]. Surgical excision results in complete resolution. Recurrence is rare, with only two cases reported in the literature [8]. Multiple osteomas may be associated with Gardner’s syndrome [1]. Gardner’s syndrome is a variant of familial adenomatous polyposis. It is characterized by the presence of multiple intestinal polyposis, osteoma, desmoid tumours, supernumerary teeth, fibromas and sebaceous cysts. Intestinal polyps have increased potential for malignant transformation and should be investigated in cases of multiple osteomas. Peripheral osteoma may be considered as a genetic marker for intestinal carcinoma [2].

In our reports, the isolated osteoma was implicated to be a reactive lesion. As the review of systems did not reveal any abnormalities and hence the diagnosis of Gardner’s syndrome was excluded. However, the patients were kept on a strict follow-up. The peripheral type of osteoma is most frequent in the mandible, diagnosed only when they result in cosmetic disfigurement. Surgical excision is the treatment of choice. Multiple osteomas are associated with Gardner’s syndrome and can be considered as markers for early stages of intestinal carcinomas. Hence, patients are required to be followed up regularly.

The authors report no conflicts of interest related to this study.