Background: Periodontal diseases are an infection caused by many factors include different bacterial pattern. Biofilm is the main reason for periodontal disease that consists of many microorganisms. Streptococci of Mitis group such as Streptococcus mitis, Streptococcus oralis, are early colonizers within development of dental biofilms, which is the cause of periodontal disease. The periodontal diseases treatment focuses primarily on the reduction of the microorganism count thus antimicrobials agents has been used as an adjunct to conventional therapy. Multi-drug resistance within the treatment of infectious diseases is a growing problem and also the widespread use of broad-spectrum antibiotics has created antibiotic resistance for several human microorganisms. Recently, nanoparticles have significant attention for medical applications because of their antimicrobial effectiveness. Gold nanoparticles (Au Nps) were considered as potential agent to control oral bacterial infection because of its optimal antibacterial activity and non-acute cytotoxic effects on human cells. In this study, gold Nps with average particles size (43 nm) will be use. The objective of this study is to investigate the antibacterial effect of gold nanoparticles against Streptococcus mitis in dental plaque.

Materials and Methods: The first step of present study was tacking aerobic and anaerobic plaque samples from 10 patients with periodontal disease. Second step was morphological and microscopicale examination in addition to the biochemical tests and vatic 2 machines were used to confirm identification of Streptococcus mitis. The next steps were synthesis of gold nanoparticles by chemical method (seed growth method) and testing its characterization. Finally test the potential antimicrobial effect of gold nanoparticles on Streptococcus mitis. The data were analyzed by using descriptive statistics including mean and standard deviation, LSD were done for the analysis of MIC of (gold nanoparticles) against (Streptococcus mitis Bacteria). Significance of all the statistical tests were determined at p<0.05 using SPSS (Statistical Package for SocialScience) version 22 software.

Results: The gold NP in (100 ppm) concentration has the same antimicrobial effect of chlorhexidine against Streptococcus mitis, and there is no significant difference between them, (p>0.05).

Conclusions: Gold nanoparticles were effective against Streptococcus mitis similarly to chlorhexidine when it was used in high concentration as antimicrobial agent.

Periodontal disease which is one of the most widespread diseases affecting mankind, involve the adherence of bacteria and development of biofilms on both the natural and restored tooth surface [1]. Dental plaque is a biofilm which is pale yellow in color that develops naturally on the teeth. A dental plaque is formed by colonizing bacteria trying to attach themselves to the tooth surface. Dental biofilm, more commonly referred to as dental plaque is composed of about thousand species of bacteria that take part in the complex ecosystems of the mouth [2]. Dental plaque starts when bacteria that are present in the mouth attach to teeth and begin multiplying. Plaque can form on teeth both supra gingival plaque, or sub gingival plaque [3]. The plaque is made up of colonies of microorganisms such as bacteria, yeast dumped together in a gel like organic material composed of bacterial byproducts including sugar, food debris and body tissue [4]. The predominant initial colonizers of teeth are Gram-positive facultative anaerobic cocci and rods, including Streptococcus and Actinomyces species. These initial colonizers provide a foundation for further development of dental biofilm [5]. Streptococcus mitis, Streptococcus oralis, and Streptococcus sanguinis of the Mitis group streptococci [6,7] are close relatives to Streptococcus pneumonia which is the important human pathogen. They are part of human normal oral flora, but occasionally can cause acute or chronic disease as opportunistic human pathogens in contrast to S. pneumonia. They are associated with gingival disease and caries and occasionally cause sub-acute infective endocarditis [8]. As they are the early colonizers in the development of dental biofilms [9]. They are able to develop natural competence for genetic transformation as S. pneumonia [10] and have horizontal gene transfer, such as virulence genes, that has been documented between these species [6,11-13]. The emergence of multi-drug-resistant (MDR) microorganism has become a danger to public health [14]. Antibiotic resistant bacteria cause millions of infections and thousands of deaths every year in the U.S. according to a report published by the U.S. Centers for Disease Control and Prevention, addition to that, the continuous and significant reduction in the number of approved antibiotics in the past decade has a role factor in the increasing threatening situation [15] that lead to an urgent need for the invention of novel antibacterial and treatment strategies [16]. Nanoparticles (NPs) give versatile platforms for medical therapy depend on their physical properties [17,18]. NPs have significant interest in their development as potential antimicrobial agent [19]. Among NPs, gold nanoparticles are wide used as a catalyst for diagnostic, biological purposes, medical therapy and gene therapy [20,21]. The gold NPs can synthesize easily by chemical technique and they have a less toxic effect compared to other nanomaterial’s [22-24]. However we need to measure the antimicrobial activity of gold NPs against Streptococcus mitis bacteria in dental plaque. Second step was morphological and microscopicale examination in addition to the biochemical tests and vatic 2 machines were used to confirm identification of Streptococcus mitis.

Single pure colony was picked up from blood gar plate under sterilized condition and subjected to Grams stain in order to identify their response to this stain microscopically under oil immersion with magnification power 100X [26].

Blood Hemolysis test this test used to determine the ability of Streptococcus mitis to bleach the heme iron by hydrogen peroxide (H2O2), leading to greenish color on blood agar [27].

This test was conducted on cells of bacteria colonies. Hydrogen peroxide 3% (H2O2) had been used to determine the ability to produce catalase enzyme by bacteria [28]. Chlorhexidine gluconate was used in a concentration of 0.2% all over the experiment as a positive control material.

Inoculums of bacteria were activated by the addition of 0.1 ml of bacterial culture to 10 ml of BHI-B followed by incubation for 24 hrs at 37°C [31].

Final step was Determination of antibacterial activity of gold nanoparticles on Streptococcus mitis bacteria. In this experiment, agar well diffusion method was applied to study the antimicrobial effect of the gold NPs on Streptococcus mitis bacteria were used) [32]. MHA agar media was poured separately into sterile petri dishes, 0.1 ml of activated S. mitis were spread in duplicate on MHA agar plates, then wells of equal size and depth made with sterile stainless steel Cork borer in the MH Aagar 4 mm in diameter were prepared in the agar. Each well was filled with gold NPs in different concentrations (100 ppm, 50, 25, 12.5, 6.25, 3.125, 1.562, 0.781, 0.391, 0.195, 0.097) and one well for chlorhexidine 2% as positive control and last well for deionized water as negative control, then incubated aerobically for 24 hrs at 37°C. The diameter of inhibition zone containing the test materials were measured and recorded after the incubation under aseptic condition.

Morphologically they were characterized through observing their small, round, convex, smooth, glistening colonies and without pigments (Figure 4).

Streptococcus mitis is catalase negative due to absence of gas bubbles indicates the absence of catalase enzyme.

Streptococcus mitis is α-hemolysis, due to bleach of heme iron, resulting in a greenish color on blood agar (Figure 6).

The vitek 2 system showed the presence of Streptococcus mitis with 90% probability and good identification (Figure 7). 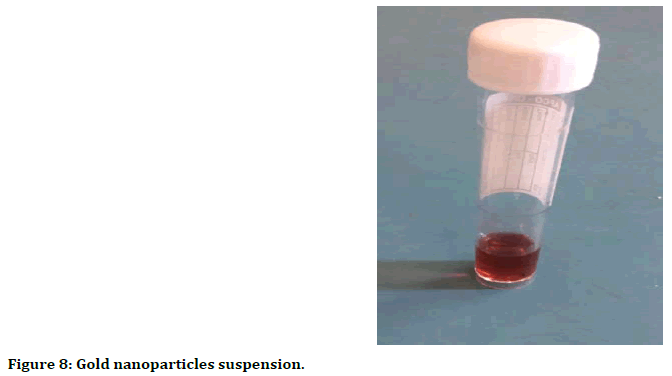 The ultraviolet (UV)-visible spectroscopy: UVVis absorption spectroscopy was used to study the optical and structural properties of the prepared gold nanoparticles. Figure 9 shows the absorption band characteristics with plasmon peak placed at around 538 nm for AuNPs and this related to Surface Plasmon Resonance (SPR). The presence of single SPR indicates sensible dispersion of nanoparticles within the solution and this property associated with AuNPs.

Atomic force microscope (AFM): Two dimentions and three dimentions imsages of AFM are in Figure 11, it demonstrate the average grain size of gold NPs is 43.36 nm and it distributed uniformly and homogenously. The gold nanoparticles exhibit optimal antimicrobial activity against Streptococcus mitis. This could as a result of the gold is that the nanomaterial’s revealed effective treatment to the microbial infections. Gold nanoparticles show no toxic effects and are therefore biocompatible and have incorporated into a varity of industrial and biomedical processes [33]. In the food industry, Au NPs has been extremely effective as antimicrobial agent [34]. Moreover, they have good activity on microorganism by many ways and have different mode of action [35,36]. Basically, Au NPs act on microbes by inhibit the process of DNA transcription by preventing the uncoiling of DNA by bind to the DNA which lead to death of cell [37,38]. Also, the highly reactive oxygen species (ROS), is a potential mechanisms for the antibacterial action which can be formed in the presence of metallic nanoclusters may lead to cell membranes dysfunction and DNA damage in bacteria [39,40]. The results of present study are in agreement with studies done by Xiaoning et al. [41] was mentioned that gold nanoparticles have antibacterial activity by exposure to pathogenic bacteria when use MICs of gold nanoparticles, Senthilkumar et al. [42] that demonstrate the antibacterial activity of different concentration of AuNPs solutions were inhibit both gram positive and gram negative bacteria and Ghanavati et al. [43] That demonstrate the gold nanoparticles have the most MIC (Minimum Inhibitory Concentration at 100 ppm concentration that 6 strains of Salmonella were inhibited by this concentration.

Gold nanoparticles are effective as same as chlorhexidine against Streptococcus mitis at concentration of 100 ppm, so it can be used as an alternative to chx. further in vitro and vivo studies are essential to validate the use of gold nanoparticle as antimicrobial agent against primary colonizer microorganism.

Department of periodontics, College of Dentistry, University of Baghdad, Iraq