Epidermal cysts are benign tumours which can occur anywhere in the body. They are generally seen on the scalp, face, neck, dorsal and ventral trunk. Here we see a case of epidermal cyst in the pre-auricular region and not originating from a pre-auricular sinus and discuss the clinical presentations, imaging and treatment. Patient underwent surgery for excision of the cyst.

The majority of lesions are sporadic; however familial inheritance is possible, particularly in people who have several lesions. Multiple epidermoid cysts can appear as sporadically scattered lesions throughout the body or as cluster lesions in the retro auricular area, which is typical.

Epidermoid cysts are fluid-filled protrusions that arise from the follicular infundibulum and are found immediately beneath the skin's surface. Lesions frequently appear on their own. Injury-induced epithelial implantation, on the other hand, is regarded an etiologic factor. As a result, it's also known as an epidermal inclusion cyst. Furthermore, epidermal cells penetrate deep into the skin and grow as a result of surgery or skin problems cysts. Because the cyst wall is lined with stratified squamous epithelium, keratin layers will peel off and accumulate inside the cyst. An epidermoid is usually caused by a blockage of the follicular opening [1-7].

Patient was taken up for surgery after doing necessary investigations and after obtaining clearance from anaesthesia. The sample taken from the pre-auricular region was sent for histopathology (Figure 1). The results of the histopathology showed that it was a cystic lesion lined by stratified squamous epithelium and granulation tissue with foreign body type of giant cell reaction enclosing keratinous material (Figure 2). 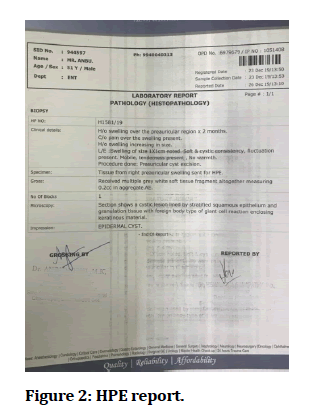 The histopathological features and clinical importance of many forms of cutaneous cysts containing fluid or semisolid material have been characterised. Some cysts have an epithelial cell wall that is either stratified squamous epithelium or unstratified squamous epithelium. True cysts are what they're called. Pseudo cysts, on the other hand, are cysts that are not bordered by epithelium and are instead surrounded by connective or granulation tissue. In general, cutaneous cysts are spherical, domeshaped, projecting, or deeply situated dermal or subcutaneous papules or nodules that can be found in a variety of places. Histopathological investigation is usually used to confirm the diagnosis.

Dermoid and epidermoid cysts are both referred to as "dermoid," though they are two distinct things. Both are cystic choristomas that are filled with keratin, cholesterol clefts, or degraded blood components and are created by keratinizing squamous epithelium; however, real dermoid cysts contain skin appendages on their walls, whereas epidermoid cysts do not. Dermoid cysts are widespread and are usually identified in infancy or early childhood. They are usually found superficially or in the anterior orbit, mould bone, and only rarely cause bone lysis. Epidermoid cysts, on the other hand, can appear anywhere on the body and are frequently discovered later in life. If they are in the orbit, they usually create a relationship with the bone. Although these cysts are recognized as benign lesions, rare malignancy can arise. These cysts may progress slowly for years [8-13].

Here we see that the patient presented with an infected pre-auricular cyst not associated with a pre-auricular sinus which a variant from the normal presentation.