Gram-negative bacilli can cause a variety of infections 1n humans which may be either community-acquired or hospital-acquired. They include urinary tract infections (UTI), respiratory tract infections, bacteremia, septicemia, surgical site infections (SSI) and meningitis. Gramnegative bacilli have the inherent competence to produce various mechanisms which augment drug resistance and the ability to transfer the resistance determinants to other bacteria. They also can acquire resistance with the help of certain genetic materials thereby facilitating its spread [1]. The emergence of resistance in Gram-negative pathogens has alarmed many clinicians and health-care workers both in community and hospital settings. Multidrug resistant (MDR) bacteria have caused an increase in the incidence of nosocomial infections. They are often associated with prolonged and expensive treatment, which is a major drawback in developing countries [2].

The common Gram-negative bacilli causing nosocomial infections include Escherichia coli, Klebsiella species (spp.), Pseudomonas spp., Citrobacter spp., Enterobacter spp., and Acinetobacter spp. E. coli is the most common pathogen associated with UTI followed by Klebsiella spp., the latter being highly prevalent 1n respiratory tract infections such as pn eu monia. UTI, respiratory tract infections and SSI due to P. aeruginosa are the most life-threatening, particularly in the intensive care unit (ICU) [3]. The mortality rate is found to be high 1n patients with endocarditis, septicemia particularly 1n patients with malignancy, burns or drug addiction [4]. Ventilator associated pneumonia (VAP) is one of the most common nosocomial infection related to high morbidity and mortality, particularly when caused by MDR organisms and due to delayed or inappropriate antibiotic usage. Among the MDR Gram-negative pathogens, the major problem is of carbapenem resistance, where the carbapenemase production is the major defense mechanism [5]. Though there IS an Increase In frequency of antimicrobial resistance In both Gram-positive and Gram-negative pathogens, there is rapid escalation 1n resistance due to Gram-negative bacilli. New drugs such as linezolid and daptomycin are employed against infections caused by resistant Gram-positive pathogens, but treatment of infections caused by Gram-negative resistant pathogens is challenging as new drugs against them are still in the developmental stage. Further, prompt implementation of infection control is necessary to avoid dissemination of the microbes. [6,7]. Earlier, resistant Gram-negative bacterial infections were successfully treated with penicillin group of antibiotics, such as carbenicillin, ticarcillin, and piperacillin. Out of all Plactams, carbapenems have maximum antimicrobial spectrum. This is due to their high affinity for penicillin binding protein 2, good stability against most serine-based P-lactamases and excellent outer membrane permeability. Carbapenems are the antibiotics used as a last resort for treatment of MDR Gram-negative pathogens. However, resistance to this group of drugs has developed due to its increased usage [8-10].

Carbapenems currently having Food and Drug Administration (FDA) approvals for clinical use are 1m1penem, meropenem, ertapenem and doripenem. Nevertheless, bacteria can acquire carbapenemhydrolyzing P-lactamases called carbapenemases. These enzymes have emerged in various parts of the world, namely Europe, the Indian subcontinent, and the United States (US). Many of the carbapenemases recognize almost all hydrolysable P-lactams; including oxyimino Plactams and most are stable against inhibition by all Plactamase inhibitors. However, some carbapenemases are less active and they require additional mechanisms for exhibiting resistance. The commonly encountered organisms include K. pneumonia, E. coli, Pseudomonas spp., Acinetobacterspp., Citrobacter spp., and Enterobacter spp [11]. The emergence and spread of NDM-1 were reported from India, Pakistan, and UK. Later it was reported from Bangladesh, Australia [12,13]. The overall aim of this study was to obtain better information about commonly isolated MDR Gram-negative organisms from various wards of our hospital, in relation to selection and susceptibility to antimicrobial therapy. This information would help in designing antibiotic policies and would help in emergency.

The present descriptive study used the samples such as various clinical samples included 1n the study was pus, unne, endotracheal aspirates (ET aspirate), blood, sputum, ascitic fluid, high vaginal swab (HVS) and synovial fluid. The Standard reference strains such as Escherichia coli ATCC 25922 (Figure 1), Pseudomonas aeruginosa ATCC 27853, Klebsiella species (spp.) (Figure 2), and the follwing standard antibiotics including Ciprofloxacin (5μg), gentamicin (10μg), amikacin (30μg), aztreonam (30μg), cefotaxime (30μg), cefuroxime (30μg), ceftazidime (30μg), ceftriaxone (30μg), cefixime (5μg), cefdinir (5μg), piperacillin-tazobactam (100/10μg), meropenem (1Oμg) and polymyxin B (SOU) were used in the study. For isolates from urine sample- nitrofurantoin (300μg) and nalidixic acid (20μg) were included. The patients with the infected with Gram-negative bacilli (from all the routine clinical samples for diagnosis) irrespective of the ages were included in the study. The exclusion criteria as followed bacteria other than Gramnegative bacilli were excluded from this study. Permission to conduct this study was obtained from the institutional ethical committee. Various clinical samples received in microbiology laboratory during the period May 2012 to August 2013 from patients in different treating units of Sree Balaji Medical College and Hospital, Chrompet, Chennai were included in the study. A total of 200 clinical samples were collected. They were Gram stained and cultured on appropriate media. Out of the samples collected, a total of 96 Gram-negative bacilli identified based on the biochemical reactions (Figure 3A-G) were included in the study. Antibiotic susceptibility tests were performed. The isolates were identified by adopting the previous method88. Bio-statistical analyses were performed using SPSS 15. 0 software. Carbapenemases was detected using Modified Hodge test (MHT), Combined disc test (CDT) assays. 71, 74 The following primers were used in the PCR reactions65. NDM-Fm (5'-GGTTTGGCGATCTGGTTTTC-3'), NDM-Rm (5'-CGGAATGGCTCATCACGATC-3'), The primers amplified an internal fragment of 621 base pairs (bp) of the bl a N DM-I gene. The primers were obtained from Sigma Aldrich. PCR products after electrophoresis against a DNA ladder on gel documentation yielding a band of 621 bp were considered positive for NDM-1gene (Figure 3H). Figure 3E. Demonstration of Minimum inhibitory concentration against meropenem among the isolates. 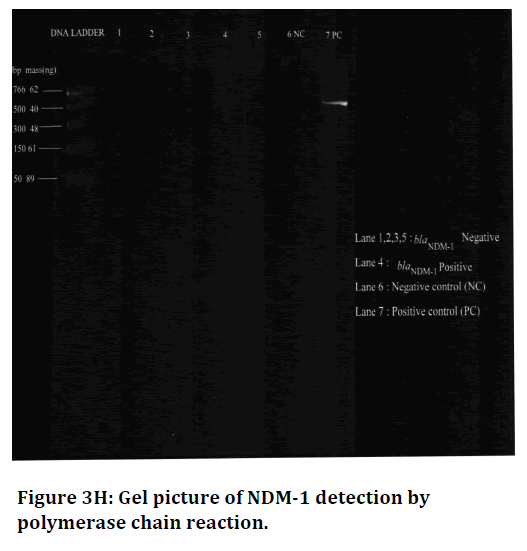 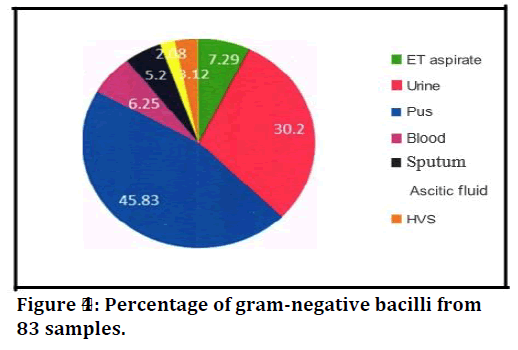 E. coli was the most prevalent organism isolated out of the total number (Table. 3) of Gram-negative bacilli followed by Klebsiella spp., Pseudomonas spp., Proteus spp. and Acinetobacter spp. Of 96 isolates, 22 (22.91%) showed resistance or intermediate susceptibility to meropenem by Kirby-Bauer disc diffusion method (Table 4).

Table 3: Distribution, number, and percentage of 96 Gram-negative pathogens in the study.

The MIC of meropenem was found to be: S1μg/L among 76 isolates (Susceptible) and 2μg/L among 20 isolates (Intermediate). Hence, there was no discordance between the two screening methods. 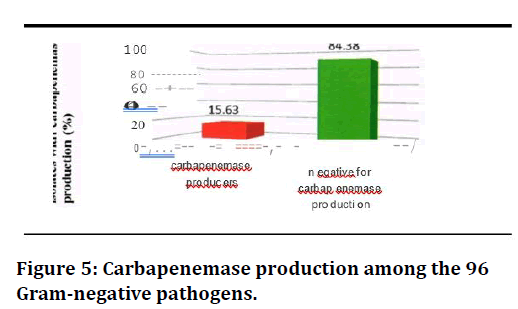 Figure 6. Distribution of carbapenemase production among the pathogens.

Table 6: Distribution of carbapenemase production among the pathogens.

Table 7: Distribution of carbapenemase producers among the different wards.

It was found that out of the Gram negative bacilli from ICU, orthopaedics, general medicine wards and general surgery, 32 %, 18.1 8%, 12.9 % and 5% respectively were found to produce carbapenemase (Table 8 and Figure 8). Table 9: Comparison between types of samples, isolates and carbapenemase production among the pathogens.

For the carbapenemase producers isolated from unne (two E. coli, four Klebsiella spp. and one Pseudomonas spp), nalidixic acid and nitrofurantoin were tested in addition to the above-mentioned drugs. It was found that all the carbapenemase producing urine isolates except one Klebsiella spp. were resistant to nalidixic acid and nitrofurantoin (Figure 9). Figure 9. Pattern of resistance among the carbapenemase producers.

Detection of NDM-1 by PCR

The present study was conducted to find the prevalence of carbapenemase producing Gram-negative bacilli among various clinical samples. Modified Hodge test and combined disc test which are a simple and cost effective procedure were taken as the methods of choice for phenotypic detection of carbapenemase producers.

Livermore DM et al. [8] detected that the activity of ertapenem than other carbapenems, was affected by ESBLs though it was sensitive in detection of KPC producers. According to CLSI, some Enterobacteriaceae spp., have intrinsic mechanism of resistance other than carbapenemase. Among the 96 Gram-negative bacilli, the overall prevalence of carbapenemase producers by phenotypic methods was found to be 15.63%. who reported a prevalence of 14%? A study from Chandigarh by Datta et al. [14] showed that out of 330 isolates, carbapenemase was detected 1n 26 isolates (7.87%). In previous studies it was found that out of 200 isolates, 45 (22.5%) were carbapenemase producers. In another study it is reported an overall meropenem resistance of about 30% which was higher compared to the present study.

Out of the 42 E. coli isolates from various clinical samples, carbapenemase production was found in 4 (9.52%) isolates. This is like a study from Andhra Pradesh who reported a prevalence of 11.3% among E. coli. Wattal C et al. [15] from New Delhi reported a prevalence of about 13% carbapenemase producing E. coli. A study from Morocco by M.A el Wartiti et al. [16] found a prevalence of 27. 9% carbapenemase production in Klebsiella spp. Wattal C et al. [15] from New Delhi reported a rate between 31 and 51%. But this contrasts with a study from Pondicherry by Parveen et al. [17] who documented a higher rate of 43.6% resistance to meropenem. Gupta et al. [18] from New Delhi reported a lower rate of 6.9% meropenem resistance. According to the European Antimicrobial Resistance Surveillance Network (EARS. Net, formerly EARSS) data 2009, the rates of carbapenemase producing K. pneumoniae varied from 43.5% in Greece, 17% in Cyprus, 1.3% in Italy, and 1.2% in Belgium, and less than 1 % from 23 other European countries [19]. The MHT was found to be sensitive for the detection of carbapenemases but it lacked the specificity. Also, it failed to determine the class of carbapenemases. But this test is useful for screening of carbapenemases mainly in Enterobacteriaceae with KPC, as recommended by CLSI. Therefore, in this study MHT was taken as a method of choice for screening in Entero bacteriaceae. It was found that two Klebsiella spp. which were not detected by MHT were positive by CDT. This could be due to failure of MHT in detecting weak carbapenemase producers, especially for MBL producing Enterobacteriaceae. The presence of an inhibitor such as EDTA m CDT has increased the specificity in detection of MBLs. 16 In this study, two Pseudomonas isolates (15.38%) which were positive by CDT were not detectable by MHT. This agrees with the study from Pondicherry by Noyal MIC et al. [19] who found that MHT was not preferred for determination of carbapenemase in non-fermenters and suggested the use of CDT. In previous studies it showed a carbapenemase prevalence of 15% in Pseudomonas spp. This also correlates with two other studies where the prevalence was 12% and 14% respectively. But it is in contrast to the study which documented a comparatively low prevalence of 8.05%. In the present study it was found that out of the 22 carbapenem resistant organisms by disc-diffusion method, only fifteen isolates were found to produce carbapenemase, whereas the remaining 7 (31.81%) isolates did not show a positive result by both the methods. This is in correlation with a study which showed that 7 out of 26 (26.92%) Gram-negative bacilli isolated were negative for carbapenemase production but showed resistance to carbapenem by disc-diffusion method. This could be due to other mechanisms of resistance to carbapenems such as overproduction of ESBL or Amp C -lactamase combined with porin loss. A total of 25 Gram-negative bacilli were isolated from ICU, out of which 8 (32%) carbapenemase producers were detected. Out of 31 Gram-negative isolates from general medicine ward, 4 (12.9%) were found to produce carbapenems. Among the isolates from general surgery ward, 1 out of 20 (5%) and among the isolates from orthopaedic ward, 2 out of 11 isolates (18.18%) were found to produce carbapenemase.

All the carbapenemase producers in this study (100%) were found to be susceptible to polymyxin B which agrees with the other studies. But contrasts with the studies from Uttarakhand by Thakuria et al. [22] reported 94% sensitivity to polymyxin B and from Pondicherry by Parveen et al. [17] in Klebsiella isolates who reported a very high resistance rate of approximately 60% for polymyxin B. However, in our study we did not document any resistance to polymyxin B.

The encouragement and support from Affiliated to Bharath Institute of Higher Education and Research, Chennai, Tamil Nadu, India is gratefully acknowledged for providing the laboratory facilities to carry out the research work.