OBJECTIVE: Stroke is a medical emergency due to a sudden alteration in how blood is supplied to the brain, usually caused by a blocked artery or a burst blood vessel. There are several risk factors for stroke that can include medical conditions, lifestyle choices, genetic factors, and a person’s family history. This study was carried out with an objective to determine the frequency of various risk factors for stroke among males and females in a tertiary care hospital in Zulfi, Saudi Arabia. MATERIAL AND METHODS: This observational cross-sectional was carried out at the Medical Department of Zulfi General Hospital, Zulfi, Majmaah, Kingdom of Saudi Arabia from 1st January 2018 to 30th December 2019. Patients with features of stroke based on history, clinical examination, and confirmed by neuroimaging confirmed (CT scan/MRI of the brain) were enrolled in this study. The exclusion criteria were patients with brain scans showing anomalies such as brain tumor, meningitis, multiple sclerosis, and metabolic alterations that may explain focal neurological impairment. In the selected sample population, the prevalence of different risk factors for stroke among males and females and the forms of stroke were evaluated. RESULTS: The mean age of the selected sample population (n=53) was 68.56 with SD=5.21 years, out of which the mean age of male was found to be 65.55+7.46 years and that of female was 73.21+4.25 years. Out of total 53 patients, 51(96.3%) were thromboembolic and 2 (3.7%) cases were cardioembolic. Hypertension 15(28.3%) was the most important risk factor, while the presence of diabetes mellitus 5(9.5%) was occasional. The data presented with 31(58.5%) pooled hypertension and diabetes as significant risk factors among the stroke patients. Hypertension 12(37.5%) and diabetes 4(12.5%) were found to be more common among males. However, the frequency of the combined risk factor of hypertension and diabetes was comparable both in males 16 (50%) and females 15 (71.4%). CONCLUSION: In this study, the prevalence of different risk factors was high, which is close to that found in developed nations. The main risk factors for males were hypertension and diabetes, while diabetes mellitus was more common in females.

Stroke is a widespread neurological condition experienced worldwide. It is the third leading cause of death and is the destructive endpoint of cerebrovascular disease in many surviving patients [1]. Around 15 million people around the world suffer from strokes every year, according to the World Health Organization. Five million of them die and another five million are permanently disabled [2].

The public health burden of stroke is increasing internationally, particularly in nations with an aging population and western lifestyles [3]. Studies have shown that there is a double burden of the disease in the Middle East region due to declining rates of communicable diseases and rise in non-communicable disease rates [3]. As a major health issue, stroke is rapidly emerging, with the prediction that mortality resulting from it will almost double in this area by 2030 [4]. The incidence and prevalence of strokes was low in Saudi Arabia relative to those recorded in Western countries, which may be due to the predominance of younger age groups in the region [5-7].

For determining the origin and its prevention, epidemiological studies of risk factors for stroke are relevant. Common risk factors for stroke include high blood pressure, high levels of cholesterol, atherosclerosis, diabetes, atrial fibrillation, smoking, physical inactivity, alcohol consumption, obesity and sleep apnea. In people over the age of 55, the risk of stroke is also higher. Compared to women, men have a higher stroke risk. Non-Caucasian people have a higher stroke rate than Caucasians. Individuals with a family history of stroke are at a greater risk and there is a risk of another stroke for individuals who have suffered a previous stroke or transient ischemic attack (TIA). TIA raises the risk of stroke significantly, as 40 percent of people with TIA experience a stroke, 5 percent within 2 days and 10-15 percent within 3 months of the initial TIA [8].

Preventive measures by treating the risk factors have not been able to eliminate stroke, and frequently stroke remains the first symptom of presentation in populations. The management of stroke in society is shrouded in mystery and negativism [9]. Not until there is local data and models established, many still maintain a nihilistic attitude toward treatment of acute stroke. Hence this study was carried out with an aim to determine the prevalence of stroke, frequency of various risk factors for stroke and to compare its types among male and female patients hospitalized at Zulfi General Hospital Zulfi, Majmaah, KSA.

This is an observation cross-section study design.

The total population of Zulfi is estimated to be 80,000. The sample of 53 was calculated using one sample proportion formula based on the prevalence of stroke.

P1 is the anticipated proportion.

Po is the Null Hypothesis value or actual proportion.

p1–po is the difference between proportions.

Z 1–β is the desired power of study.

Z 1-α/2 is the desired level of significance.

The stroke patients were selected either from the outpatient or inpatient wing of Zulfi General Hospital, Zulfi, Majmaah, Kingdom of Saudi Arabia from 1st January 2018 to 30th December 2019. Stroke was confirmed based on history and clinical examination in addition to neuroimaging confirmed (CT scan/MRI of brain). The exclusion criterion was brain scans showing anomalies such as brain tumour, meningitis, infectious or bacterial encephalitis, multiple sclerosis and metabolic alterations that may explain focal neurological deficiency, e.g. hypoglycemia. To record the comprehensive history, risk factors for stroke, type of stroke, pre-existing medical conditions, laboratory and radiological investigations, a proforma was designed. All patients were subjected to neuroimaging, i.e. Brain CT scan or brain MRI or both. Appropriate permission and ethical clearance was obtained from Ethical Committee, Majmaah University.

The characteristic features of the Stroke sub type were noted. Hypertension was defined based on two blood pressure readings of >140/90 mm Hg, electrocardiographic or echocardiographic proof of hypertension and previous medical history. Diabetes mellitus has been identified as a past medical history of diabetes mellitus or persistent elevation of blood sugar (fasting blood sugar > 110 mg/dL or random blood sugar >160 mg/dl) requiring treatment during hospitalization with hypoglycemic agents or insulin.

Table 2: Description of gender differences in relation to risk factors. 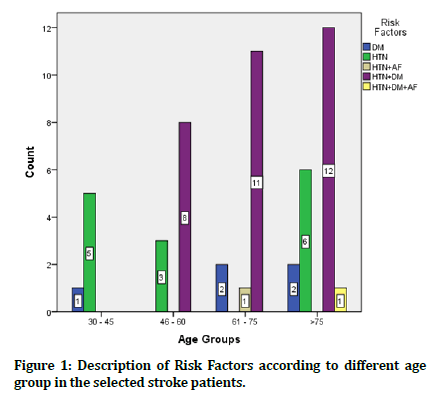 Figure 1. Description of Risk Factors according to different age group in the selected stroke patients.

In relation to age, slight gender differences were found when age was divided into 15-year increments (Table 3). For example, in the age range of 76 and above, 12 cases of male stroke were reported compared to nine cases of female stroke in the same age range. Likewise, in the age range of 46 to 50 years, there was a higher number of male cases (7) compared to female cases (4). Recognition of gender differences can help with interventional treatment programs, although these differences are not fully understood (Figure 1).

Table 3: Description of risk factors according to different age group in males and females.

Stroke is a major health problem in all industrialized countries and the leading cause of disability in industrialized countries [10,11]. According to the WHO, 15 million people worldwide suffers a stroke, 60% of those who suffers stroke die or become dependent. Minorities, especially blacks, have disproportionately higher stroke incidence, morbidity and mortality than white individuals at the population level [12-14]. Data from the Framingham Study show noted six months after a stroke, 19% of elderly survivors had aphasia, 50% had hemiparesis (weakness on one side of the body), 30% were unable to walk unassisted, and 26% were dependent in activities of daily living (ADL). Thirty-five percent had depressive symptoms [15-19].

There are several risk factors for stroke. These include older age, unhealthy diet (e.g. salty foods, alcohol and over-consumption of saturated fats), high blood pressure (hypertension), diabetes mellitus obesity, high cholesterol cigarette smoking, pre-existing heart disease, lack of exercise and atrial fibrillation. These factors can contribute to the previously discussed condition of atherosclerosis [20]. Previous history of a TIA or stroke are also risk factors for first time and recurrent stroke, respectively [21]. In terms of recurrent stroke, soon after an initial stroke, these risk factors appear to have the predominant impact, especially within the first 7 days.

Risk factors that can be treated with drugs include hypertension, dyslipidemia, diabetes, and atrial fibrillation. Examples of risk factors that cannot be altered are age, prior stroke or TIA, while others such as smoking, obesity, and alcohol misuse can be managed by lifestyle changes. A single risk factor for stroke is much more manageable than multiple factors sometimes categorized as a metabolic syndrome [16,22]. In a meta-analysis of European and US research, Chen et al. [23] found that the frequency and prevalence of stroke increases as people age, with males typically having a higher incidence than females. Literature associating age and gender with number of risk factors is scant.

Age is an indispensable non-modifiable risk factor for stroke with an aging-related rise in incidence [23-26]. In the population included in this analysis, both males and females were found to be similarly affected by stroke. Gender variations in stroke have been investigated in many studies [25-27]. The Canadian Stroke Audit found that there was a distribution of stroke occurrence among males and females was almost the same. Of the stroke cases investigated in the audit, for instance, 50 percent of the cases were men and 50 percent were women. Further precisely, 45 percent were men and 55 percent were women in the Canadian Stroke Audit findings from Saskatchewan [25]. In the present study, similar findings were observed where of the total stroke cases studied, 60.4% were men and 39.6% were women. Differences in sex tend to be correlated with sample size rather than geographic differences. In an extensive Danish research, which included 140,000 cases similar results were published. Of the 40,000 cases, 52 percent were men and 48 percent were women with a similar average age, Olsen et al. [28] reported. Age and gender are critical variables to be measured when researching stroke for care, education and prevention purposes [29,30]. Focusing and sharing awareness strategies and preventive programs is one of the key reasons for assessing gender disparities.

Hypertension has been reported as a significant risk factor for stroke in literature [31,32]. In his interstroke report, O'Donnell et al. [26] found that hypertension as most significant risk factor for all subtypes of stroke. The majority of cases, 28.3 percent, were reported with a prior diagnosis of hypertension in the current study. Microvascular and macrovascular complications of diabetes was found to be one of the important risk factors for ischemic stroke [33]. In the stroke population surveyed, 5 cases (9.5 percent) were confirmed to have diabetes. Up to 15% of strokes seen in Canada are accounted for by atrial fibrillation alone [34]. In the present study, the percentage of atrial fibrillation in association with hypertension was 1.8% and hypertension with diabetes 1.9%.

The stroke is frequent, debilitating and persisting more often than fatal. It is important to reinforce the significance of preventive measures for a disease that has modifiable and identifiable risk factors. However, knowledge of risk factors is helpful to minimize the burden on those individuals at risk and to mitigate the burden that their future informal caregivers and the broader health care system will unwittingly impose on them. Hypertension, diabetes mellitus, TE in our set-up are the key risk factors for stroke. Population-based surveys of long-term stroke survivors will produce projections of long-term stroke outcomes and provide patients, health providers, and communities with a greater understanding of the burden of stroke.