Relationship among Intercanine width, Intermolar Width and Arch Length in Upper and Lower Arch for Dentistry Students of Thi-Qar University

The knowledge of standard dimensions for the dental arch in human populations is especially useful to clinicians in various fields of dentistry, such as orthodontics, prosthodontics, and oral surgery, and it is of great interest to anthropologists who study dental arch growth and development in relation to various environmental, genetic, and physical factors for different populations [1].

Determination of the normal occlusion is the first step of understanding the normal as well as abnormal (malocclusion). Therefore, it is an essential step for clinical diagnosis, orthodontic management and public health preventive program [2].

The teeth in these arches are placed in such a way that they are in harmony with their counterparts in the same arch as well as those in the opposing arch [3].

Aside from the effect of the orofacial musculature labially, buccally, and lingually, the size and relationship of the dental arches is significant in maintaining correct occlusion of the teeth [4].

Arch width, arch length, and arch depth are the three dimensions that make up an arch. Intercanine width, interpremolar width, and intermolar width are all used to determine arch width.

Study cast of 30 adults (15 males and females); age ranged (20-22 yrs.) was selected according to special criteria from the orthodontic department in Thi-Qar university college of dentistry. The study sample is summarized in Table 1.

Table 1: Characteristics of the study sample.

The sample has a complete set of permanent teeth, including class I molar occlusion, and class I canine occlusion [6]. Also free of local factors that compromise the integrity of the dental arches (congenital missing, retained deciduous, and supernumerary teeth) [1,7].

The teeth are normally shaped, normal vertical and horizontal dental relationships, less than well-aligned arches 2mm of space or crowding in each arch, no rotation or displaced tooth, and no midline shift. 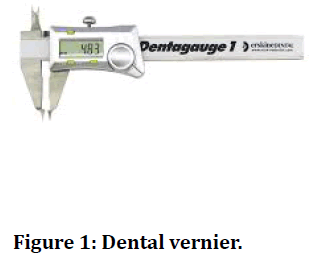 With a pointed pencil (0.5 pencil marker), some toothrelated spots visible in an occlusal view were meticulously marked bilaterally in the maxillary and mandibular study casts to facilitate the identification of the landmarks that will be used for measuring the dimensions of dental arch. To guarantee that the points were accurately positioned on the casts of the study.

Measurements were taken from (30 upper and 30 lower) dental casts, the dental Vernier was used to measure the dimensions of the dental arch.

• Incisal point: The point in the halfway between the two central incisal borders of t. [8-10].

• Inter canine distance: The linear distance between one canine's cusp point and the cusp tip of the other [1,4,14,15].

• Vertical Molar Distance (VMD): The vertical distance between the incisal point perpendicular to a line joining the mesial surface of the first permanent molars [7,15].

• Vertical Canine Distance (VCD): The vertical distance from the incisal point and a line joining the cusp tips of the first permanent canines [2,4,7,16].

The inter examiner calibration was done between two readers for the all measurements for the whole samples. The statistical comparison by (t-test) showed that there was no significant difference (P>0.05) between the examiner readings (Table 2).

Table 2: Inter examiner test for measurements made on study casts.

The following results of the computerized statistical analysis of all the dental arch dimensions that have been derived from measuring the study models are grouped into:

The descriptive statistics were applied to the all variables of the maxillary and mandibular dental arch entire sample dimensions including; mean, minimum, maximum, standard deviation, and standard error. The mean of dental arch compared with the mandibular arch (Table 3).

The relations between upper and lower arches for the same measurements

The relations within the same arch

The relation between upper and lower arches for the same measurements

On applying the correlation test, all the measurements of the upper arch found to have a highly significant correlation (p ≤ 0.01) with their antagonist in the lower arch, except the VCD showed insignificant correlation only (p ≤ 0.05). In fact, this is expected relations; since the upper dental arch occupy the lower in normal class ? occlusion. Sillman et al. [17] carried out a longitudinal study from birth to early adulthood and evaluated changes in various dental arch dimensions.

The relations within the same arch

Within the same arch the correlation was found to be highly significant (p ≤ 0.01) between the ICW and IMW for both lower and upper arches, while the VCD and the VMD found to have insignificant relation in lower arch (p ≤ 0.05), and highly significant in the upper arch (p ≤ 0.01). Hojensgaard et al. [19] showed that the asthmatic children have significantly greater molar vertical distance than the normal children especially in the maxillary dental arch which was associated with the increase in the inclination of the maxillary incisors.

Osborn et al [20] studied the effect of the lip pumper on the mandibular dental arch dimension, the result showed increase in the molar vertical distance by 1.2 mm and was attributed to the anterior tipping of the mandibular incisors. AL-Zubair [1] found in their study a very high correlation between inter canine width and inter molar width in both upper and lower arches.

The same finding was reached by this study except for the relation between the upper arch length (UVMD) and the upper inter canine distance (UICD) which was found to have an insignificant correlation with each other (p ≤ 0.05). Fried et al. [22] and Germane et al. [23], utilizing a mathematical model of the dental arch, discovered a link between VMD and ICW. They found that the increase in arch perimeter due to intercanine growth was midway between that of incisors and molars. Tibana et al [24] discovered a substantial link between UICW and LVMD within the same arch, but only a minor association between ICW and VMD. The current research discovered a weak link between UICW and UVMD, as well as UICW and LVMD. This is consistent with AL-findings [1].

The dental casts of 197 Spanish adult patients were chosen in a research by Paulino et al. [25]. A computerized approach was used to measure ICW, IMW, and VMD on each dental cast.

The results revealed a strong association between ICW and VMD for both the upper and lower arches, which is consistent with Ramadan's et al. findings [15], as well as the findings of our investigation for the lower arch solely.