Cerebrospinal fluid (CSF) symptom is that the leak of CSF through nasal cavity, because of abnormal communication between the meninges and nasal membrane. Middle-age (fourth to fifth decade) cluster, feminine gender, and obesity (body mass index >40) are the foremost unremarkably reportable risk-factors for this rare entity. Here we present to you a case of spontaneous cerebrospinal fluid rhinorrhoea and its management at our establishment.

Middle-age (fourth to fifth decade) group, female gender, and obesity (body mass index > 40) are the most commonly reported risk-factors for this rare entity.

CSF rhinorrhea can also be caused by a pre-existing weakness of the meninges combined with rapid violence.

Intracranial pressure changes lead the dura mater to gradually herniate into the bone fissure, causing the dura to thin over time.

A deteriorating dural structure can easily result in diverticula or expansions, as well as an increased chance of dural rupture, which can cause CSF leakage into the epidural area.

The majority of leaks are caused by trauma, both inadvertent and iatrogenic, and CSF rhinorrhea is most usually produced by trauma involving the skull base and face fractures. Nasal leakage is routinely disregarded in people who have no history of trauma.

Cerebrospinal fluid (CSF) rhinorrhea, when left untreated, can lead to meningitis and other serious complications.

Treatment traditionally has entailed an open craniotomy, although the paradigm has now evolved to encompass endoscopic procedures. Diagnosis is aided by biochemical assay and imaging studies [1-5].

The patient, a 35-year-old lady, had a clear liquid nasal discharge with no obvious explanation.

The patient was diagnosed with “CSF rhinorrhea” and was admitted to the local hospital for a week of rigorous bed rest and symptomatic treatment.

After a brief remission of symptoms, the patient was discharged.

The same symptoms reappeared about 15 days before hospitalisation.

Because the patient's symptoms did not improve sufficiently after symptomatic therapy at the local hospital, he was sent to our hospital for a more thorough evaluation and treatment.

The patient had a history of hypertension that was managed with medication, and there was no previous trauma or illness.

During the examination, a clear fluid discharge from the right nasal cavity was observed.

The halo sign was favourable. Table 1 shows the distinctions between nasal discharge and cerebrospinal fluid.

A CT Cisternography was done and the results were as follows

• Defect in the right cribriform plate with leak of contrast medium into the nasal cavity.
• Bilateral maxillary and ethmoid sinusitis.
• Retention cyst in right maxillary sinus.
• Deviation of nasal septum to left side (Figure 1). Trans nasal endoscopic cerebrospinal fluid leak repair was planned for the patient and the necessary workup was done.

After the preoperative preparation, the patient was taken up for surgery. Initially, a Diagnostic Nasal endoscopy was done using a 0 degree rigid Hopkins endoscope in both the nostrils and site of leak was identified on the right side (Figure 2).On lateralisation of the Middle turbinate a small meningocele was visualised (Figure 3). Sphenoidotomy was done and bipolar cautery was used to cauterise the leak area and the meningocele. After cauterisation, fat and fascia lata graft was harvested from the right thigh. The leak area was closed in five layers. The first layer was closed using fat which was harvested earlier. Following which we used surgical as the second layer to seal the leak. Tisseel which is fibrin glue was used as the third layer. For the fourth layer we used the harvested fascia lata. Over the fascia lata another layer of Tisseel was applied and left for 3 minutes for the glue to bind. The operated site was rechecked for any persisting leak and after confirming that the leak area has been closed, merocel packing was done in the right nostril. Merocel nasal pack was removed 48 hours after surgery. Postoperative period was uneventful. Follow-up after 2 weeks was uneventful and the patient had complete recovery (Figure 4). 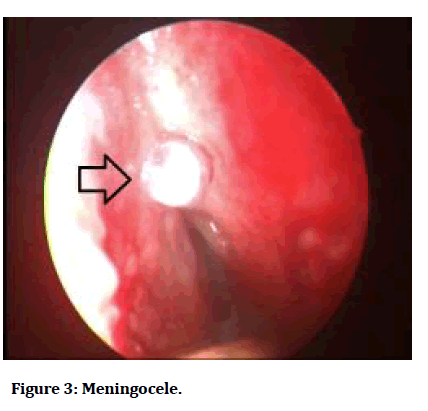 CSF rhinorrhea occurs as a result of a defect in the dura, arachnoid, and a bony skull base, leading in a fistula between the subarachnoid space and the nasal cavity. CSF rhinorrhea can occur directly through the anterior cranial fossa or indirectly through the middle or posterior fossa’s via the Eustachian tube. The most prevalent cause of CSF flow into the nasal cavity via the skull base defect site, resulting in CSF rhinorrhea, is trauma. CSF leaking that occurs in people who have no history of trauma or surgery is referred to as spontaneous or non-traumatic CSF leakage. CSF leaking on its own is infrequent.

The diagnosis and localization of the leak is important for surgical management. The endoscopic examination of the nose is inconclusive in confirming the site of leak preoperatively.

Imaging examination methods include sinus computed tomography (CT) and CT cisternography, sinus magnetic resonance imaging (MRI), and MRI water imaging. According to the literature, CT may accurately establish the location of a CSF leak in a bone defect, and the measured CT value can be utilised to determine the kind of sinus effusion. CT cisternography has a higher specificity than CT, showing the morphology, size, and location of the leak, as well as the amount of fluid leaking from the cerebrospinal fluid. However, the bone structure was not clearly seen. Therefore, we recommend that CT cisternography be combined with CT to improve the associated diagnosis [6-9].

CSF leaks are usually repaired using autologous implants such as cartilage, bone, nasal septum, turbines, meniscus, abdominal fat, ear cartilage, and other autologous tissues. Currently, the most commonly known repair method is "coating and lining". The term "covering" refers to the placement of the graft inside the defect, which is done outside the cranial cavity. The key to successful endoscopic repair of CSF leaks is to identify the source of the leak.