Study of Diastolic Function of Heart by Echocardiogram in Sepsis

The aim of the present study is to evaluate diastolic heart function by two-dimensional echocardiography in patients hospitalized in intensive care unit with severe sepsis. In the present study 41 patients who presented with features of sepsis were evaluated for cardiac function to assess for the presence of diastolic dysfunction. The study population comprised of 22 males and 19 females. Most of the patients were hemodynamically stable with mean SBP/DBP being 125.8/78.35 mmHg. Almost all the patients had tachycardia a·- presentation (mean heart rate 107.6 (±2.8) bpm. All the subjects were evaluated by a1i erial blood gas analysis. 28 (68%) patients had significant metabolic acidosis. In this preliminary study we demonstrated that diastolic dysfunction is a significant early development in the presence of sepsis. It is probably an earlier marker of cardiac involvement due to sepsis prior to development of systolic dysfunction.

Sepsis, defined by consensus conference as "the systemic Inflammatory Response Syndrome (SIRS) that occurs during infection," [1] is generally viewed as a disease aggravated by the inappropriate immune response encountered in the affected individual. The Table gives the current criteria for the establishment of the diagnosis of systemic inflammatory response syndrome, sepsis, and septic shock [1,2]. Morbidity and mortality are high, resulting in sepsis and septic shock being the 10th most common cause of death in the United States. [3].

The incidence of sepsis and sepsis-related deaths appears to be increasing by 1.5% per year [4]. A recent study from Britain documented a 46% in-hospital mortality rate for patients presenting with severe sepsis on admission to the intensive care unit [5]. As an important organ system frequently affected by sepsis and always affected by septic shock, the cardiovascular system and its dysfunction during sepsis have been studied in clinical and basic research for more than 5 decades. In 1951, Waisbren was the first to describe cardiovascular dysfunction due to sepsis [6]. He recognized a hyper dynamic state with full bounding pulses, flushing, fever, oliguria, and hypotension. In addition, he described a second, smaller patient group who presented clammy, pale, and hypotensive with low volume pulses and who appeared more severely ill. With hindsight, the latter group might well have been volume under resuscitated, and indeed, timely and adequate volume therapy has been demonstrated to be one of the most effective supportive measures in sepsis therapy [7]. Under conditions of adequate volume resuscitation, the profoundly reduced systemic vascular resistance typically encountered in sepsis [8] leads to a concomitant elevation in cardiac index that obscures the myocardial dysfunction that also occurs. However, as early as the mid-1980s, significant reductions in both stroke volume and ejection fraction in septic patients were observed despite normal total cardiac output [9]. Importantly, the presence of cardiovascular dysfunction in sepsis is associated with a significantly increased mortality rate of 70% to 90% compared with 20% in septic patients without cardiovascular impairment [10]. Thus, myocardial dysfunction in sepsis has been the focus of intense research activity. Although several mediator s and pathways have been shown to be associated with myocardial depression in sepsis, the precise cause remains unclear. these observations with the 2 major findings that survivors of septic shock were characterized by increased end-diastolic volume index and decreased ejection fraction, whereas no survivors typically maintained normal cardiac volumes, and (2) these acute changes in end-diastolic volume index and ejection fraction, although sustained for several days, were reversible. More recently, echocardiographic studies have demonstrated impaired left ventricular systolic and diastolic function in septic patients [11-14]. These human studies, in conjunction with experimental studies ranging from the cellular level [15] to isolated heart studies [16,17] and to in vivo animal models [18-20] have clearly established decreased contractility and impaired myocardial compliance as major factors that cause myocardial dysfunction in sepsis. Notwithstanding the functional and structural differences between the left and right ventricle, similar functional alterations, as discussed above, have been observed for the right ventricle, which suggests that right ventricular dysfunction in sepsis closely parallels left ventricular dysfunction [21-24]. However, the relative contribution of the right ventricle to septic cardiomyopathy remains unknown. Myocardial dysfunction in sepsis has also been analyzed with respect to its prognostic value. Reviewing septic patients on initial presentation and at 24 hours to determine prognostic indicators, found a heart rate of 106 bpm to be the only cardiac parameter on presentation that predicted a favorable outcome. At 24 hours after presentation, a systemic vascular resistance index 1529 dyne · s1 · cm5 · m2, a heart rate 95 bpm or a reduction in heart rate 18 bpm, and a cardiac index L/minl/m2 suggested surviva l.25 In a prospective study, Rhodes et ai26 demonstrated the feasibility of a dobutamine stress test for outcome stratification, with non survivors being characterized by an attenuated inotropic response. The well-established biomarkers m myocardial ischemia and heart failure, cardiac troponin [25].

In a recent met a-analysis of 23 observational studies, found cardiac troponin levels to be increased in a large percentage of critically ill patients. Furthermore, in a subset of studies that permitted adjusted analysis and comprised 1706 patients, this troponin elevation was associated with an increased risk of death (odds ratio, 2.5; 95% CI, 1.9 to 3.4, P0.001)35; however, the underlying mechanisms clearly require further research .

All patients who are admitted with features of severe sepsis in the intensive care unit during August 2011 and August 2012 were studied.

✓ All patients who presented with febrile illness and fulfilling the criteria of sepsis as defined by accepted international criteria.

✓ Patients who had a copy of their old chore included in the study.

✓ Those who were unwilling for giving written consent for the study.

✓ Presence of arrhythmias during the study.

Results are explained in detail in the form of Tables (Table 1 and Table 2) and Figures (Figure 1 to Figure 6). Figure 1. Scatter diagram of ejection fraction % in the study subjects. 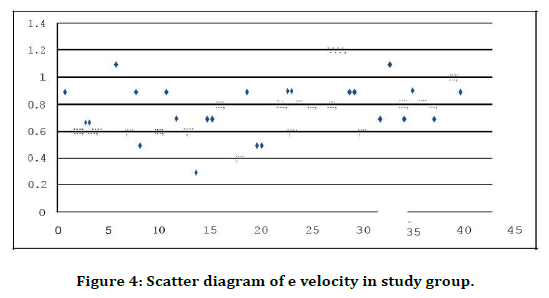 The present study has shown that a significant number of patients admitted to intensive care unit with features of sepsis of different aetiologias have shown evidence of cardiac involvement in the form of diastolic dysfunction [26]. Previous studies demonstrated that in patients with severe sepsis diastolic dysfunction of the heart is an independent predictor of hospital survival. The study by McLean and colleagues used Tissue Doppler evaluation of E/e' as an estimate of LV filling pressure in their prognostic study of BNP in patients with severe septic shock has demonstrated higher LV filling pressures in non survivors. Although no clear functional relation has been demonstrated, sepsis-induced diastolic dysfunction is likely to be associated with a range of histological abnormalities such as inflammatory infiltrate, interstitial edema, apoptosis, and necrosis [27].

The present study has not demonstrated any association of risk factors like diabetes and hypertension with diastolic function of the heart in the presence of severe sepsis. Several studies have demonstrated presence of systolic dysfunction in sepsis. Previous studies shows that 10 out of 13 survivors of septic shock had reversible depression of left ventricular ejection fraction (of< 40%). In the present study systolic dysfunction in the form of reduced ejection fraction was present only in 75 of patients. In our study echocardiography was performed in most of the patients early at hospital admission and that could have affected this finding [28].

The findings of this study are of potential clinical importance. It may help identify septic shock patients requiring more intensive therapy based upon their diastolic performance [29-31]. The association between diastolic dysfunction and sepsis might offer a novel therapeutic target. Further research incorporating therapies targeted toward improved cardiac relaxation (lusitropy) must be pursued.