Study of Maternal and Neonatal Outcome

In the present work, we intend to examine the characteristics of early against prolonged cord clamping on maternal- and neonatal-effect. Primary consequences were assessment of maternal blood-loss intra-partum, neonatal packed cell volume and serum bilirubin at 72 hours after delivery. The average maternal pre-labor packed cell volume (PCV)–33.13, and post-partum PCV- 32.65 were similar across groups and was not statistically significant. PCV difference across groups was not statistically significant. Moreover, our results showed that DCC has no effect on the length of the third trimester of pregnancy or the requirement for manual placenta-removal.

The human umbilical contraction and cutting is one of the distinctive properties of pregnancy and delivery, with many treatments offering benefits and drawbacks. The umbilical cord must be clamped and cut in order to avoid maternal loss of blood and to enable the newborn to be taken from the woman for rescue. In the first few months after birth, the placenta may provide considerable transfusions to the baby. A term child held 10 cm below the region of the uterine increases its intravascular capacity by 32 percent on average during first three minutes of life [1-3]. In young infants, postponing human umbilical cutting elevates blood levels at pregnancy and increases iron stores over the first several months following birth, perhaps enhancing children's health. Longer umbilical cord cutting in premature infants is associated with enhanced transitional circulatory, improved red blood cell volume growth, fewer blood transfusions, and a decreased risk of necrotizing-enterocolitis and intraventricularhaemorrhage [4,5]. There is a modest increase in the occurrence of jaundice in grown infants who have had their umbilical cord clamped for an extended period of time, necessitating photo-therapy. As a consequence, obstetrician–gynecologists and healthcare practitioners should double-check that postponed umbilical cord cutting precautions for newborns are in effect. As per the 2015 ILCOR scientific report and other review articles, anaemia, hypotension, respiratory failure, enteritis, retinopathy, and right ventricular hemorrhage of any degree are all linked to decreased cord cutting [6-9].

The representative sample was 200, which was obtained using a procedure for comparing two proportions, and the projected sample group for each category was 100.

Females who have delivered a baby to a term newborn through vaginal delivery.

9 Women who have delivered to a preterm neonates. 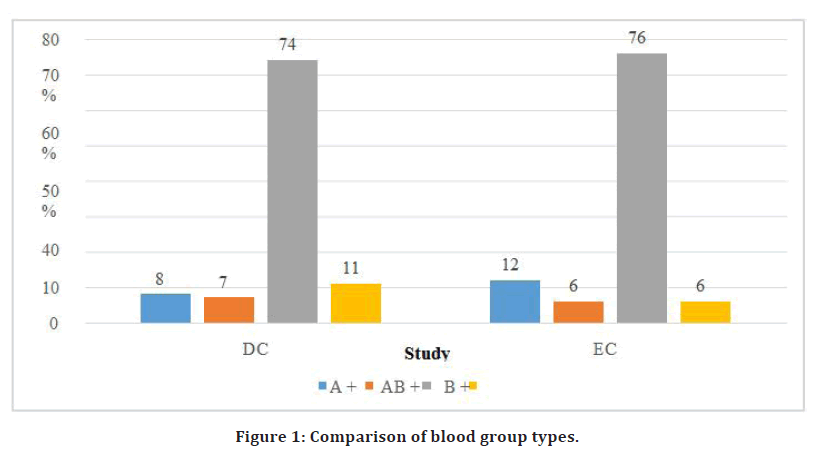 The pre-labour PCV of the woman and the post-partum PCV of the woman were not clinically important (p=0.17 and 0.5, respectfully). Extended cord cutting is not linked with an increased incidence of pregnant blood loss or postpartum haemorrhage, according to this investigation (PCV difference: p=0.2). Despite the inclusion of the PCV variation to improve the accuracy of the anticipated loss of blood, no significant variations between the testing arms were found. This is in line with previous research [1,2,5-16]. In a Cochrane review of 15 randomized clinical trials involving a total of 3911 new - borns, McDonald et al. (2013) showed no significant association in postpartum haemorrhage while ECC and DCC were examined (Figure 4). The DCC sample had four infants with polycythemia, but none of the newborns in either category required an exchanged transfusion. Similarly, there was no significant difference in the rate of polycythemia between the 2 categories.

In our investigation, the average motherhood was 27 years in both the ECC and DCC groups. Jombo et al (7) performed a randomized open study in which the average maternal age was 27 years in the ECC group and 28 years in the DCC group. In both the DCC and ECC groups, the percentage of the respondents was primigravida (55 percent). In several researches, the prevalence of primigravida has been found.

Our analysis revealed that DCC raises the PCV of infants at 72 hours after birth, which stayed larger in the DCC group when compared to the ECC group, with no significant risks of post-partum haemorrhage or neonatal-hyperbilirubinemia. Moreover, our findings stated that DCC had no effect on the length of the phase of labor or the requirement for manual-placenta exclusion. It also demonstrated that it raised neonatal haemoglobin, hematocrit, and RBCs considerably. As a result, it is recommended that delaying cord clamping is benefited rather than harmful to both the mother and the neonate.