Study of Maternal and Neonatal Outcome in High Risk Pregnancy

In this study pregnancy outcome in 99 high risk Antenatal cases were studied. 83.8 belonged to low socioeconomic status in our study. 37.1 % of the high risk was from urban background. In the study group, there were 46.4% primigravidae, 53.6% multigravida. 93.9% had longitudinal lie. Most common associated medical disorder in the study was anaemia with 61.6% with other medical disorders counting to be 38.4 %. In total anaemic cases 48.5% cases were mild anaemic. It was concluded that about 10 % of all pregnancies were high risk. With modem maternal and neonatal monitoring facilities, it was possible to identify the high risk pregnancies and manage them. The babies of 10% cases in the study group had poor perinatal outcome. There was no maternal mortality.

Pregnancy is a time of unparalleled joy and expectations. Pregnancy and childbirth have a huge impact on the physical, mental, emotional, and socioeconomic health of women and their families [1]. Pregnancy-related health outcomes are influenced by a woman's health and other factors like race, ethnicity, age, and income. Most pregnancies have a healthy outcome but for others pregnancy can be times of intense fear and uncertainity [2]. In these instances both mother and child need specialized care to ensure good health. These pregnancies are at high risk for developing problems and having poor outcomes, resulting in 70-80% of mortality and morbidity (illness) related to pregnancy for the mother and or the child [3]. High risk pregnancy is broadly defined as a pregnancy in which there is or will and increased risk of morbidity or mortality for mother, fetus and neonate. There are many maternal (mother) health conditions affecting pregnancy having profound effect on maternal, perinatal outcome like hypertension, anemia, heart diseases, diabetes, renal diseases, liver disease, lung diseases, thyroid diseases, autoimmune disease, neurological problems and genetic disorders [4-6].

The requirement of identification of high risk pregnancies and their proper management is a must, which is obvious with theme of 2005 on World health day "Every mother & child counts”. In most countries, nearly one thirds to one half of the perinatal deaths occurs in the intranatal period. The desire to prevent such occurrences has prompted the clinician to develop various methods of assessing the feta condition m utero both ante-partum and intra-partum [7,8]. Obstetricians have long searched for methods of ante-partum fetal evaluation that would be Non-invasive & accurate and yields results that were immediately available. Incidence of high risk pregnancies varies from Region to region & country to country, socioeconomic status, Environmental factors and Literacy. It is higher in urban slums and rural areas and among illiterate mothers. Incidence is also high in tertiary care centres [9]. Prevalence: Prevalence of high risk pregnancy is 5-40%. Around 25% mothers & neonates are at risk. However incidence of high risk pregnancy & neonate in India is double and this could be lowered to near 10 % by adequate MCH care. Those cases with added risk factors are prone to develop morbidity & mortality both in the mother & her unborn child. Intensive antenatal care is provided for them by the obstetric specialist at the hospitals. Intensive care provides [10]. More repeated clinical check-ups than routine check-ups, Antenatal hospital ward admission & care, Intensive maternal and fetal monitoring, Bed rest & treatment, Institutional delivery. All high risk pregnancies must be identified entered and grouped under high risk as early as possible and care to be given [11-13]. The present study is conducted to evaluate maternal and perinatal outcomes in high risk pregnancies. By adopting the above said methods we will achieve the goal of safe mother & safe child (CSSM).

The present study is a clinical evaluation of high risk pregnancy cases with maternal, perinatal outcome in the Department of Obstetrics & Gynaecology at Sree Balaji Medical College and Hospital, Chennai. All the pregnant women who visited the hospital between July 2011 and August 2012 were screened for inclusion in the study. Out of a total 1000 pregnancies beyond 28 weeks of gestational age (because drop out in follow up of cases are less) 99 high risk pregnancies met the inclusion criteria and also consented to participate in the study. ,,Case details were noted down by eliciting history from the patient. Case sheet details were also taken down. Some cases had more than one risk factor and they were also considered. The Inclusion criteria were Cases with any risk factor (Medical risk, Obstetric in present & previous pregnancies), Gestational age >28 weeks with live fetus, All booked and unbooked cases, All cases which had regular antenatal check-up outside and came for the first time to our hospital, In case of preterm labour, gestational age > 34 weeks were alone included. Various high risk factors were evaluated by a scoring system, Modified cooplands antepartum high risk scoring system/ this scoring system takes into consideration several different factors 6 0 which are given a numerical value from 1 to 5 depending on their potential impact on the outcome of the pregnancy. A score of 7 or more indicates, in majority of cases the need for high risk obstetric care. There are about 24 high risk factors which were considered. All data was double entered into MS excel and checked for data entry errors. Statistical analyses were done using SPSS 16.0. Descriptive data is presented as mean ± SD for continuous variables and as proportions for qualitative variables. Bivariate analysis was done to identify the factors associated with mode of delivery, neonatal outcomes measured in terms of Apgar score and Low birth weight using Chi square test. Coopland score across different subgroups of study population were presented as median and mean rank values. An arbitrary cut-off of 0.05 was used to interpret the significance of the p values for all analysis. 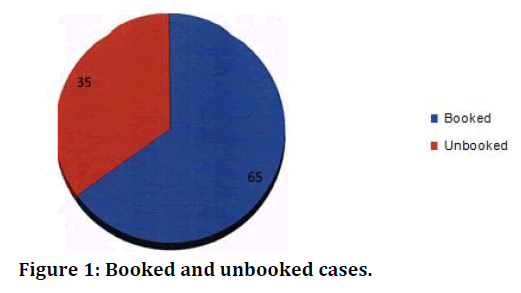 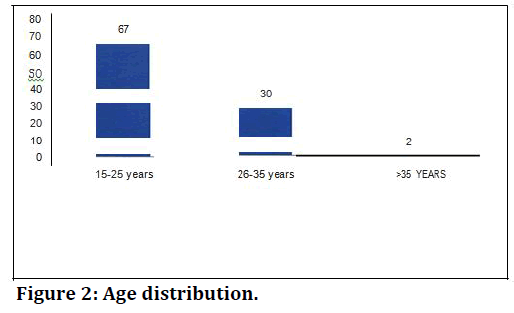 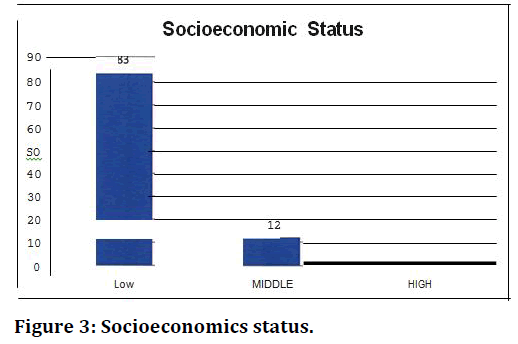 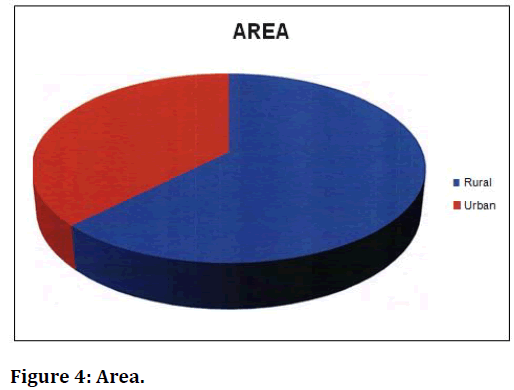 In the study group there were 46 primigravida and 53 multigravida (Table 6 and Figure 5). The score showed an increasing trend across socioeconomic strata. Primigravida had higher scores compare to the multigravida women. Women who gave birth to LBW babies had higher score compared to those whose babies had normal birth weight (Table 7 and Figure 6A and 6B). 93 (93.9%) cases were longitudinal lie (Table 8 and Figure 7). Most common associated medical disorder in the study group was anaemia (61.6%) (61 cases). Other medical disorders seen in my study were thyroid disease, diabetes mellitus and asthma (Table. 9 and Figure. 8). 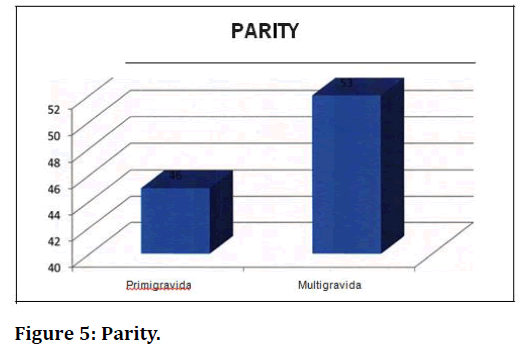 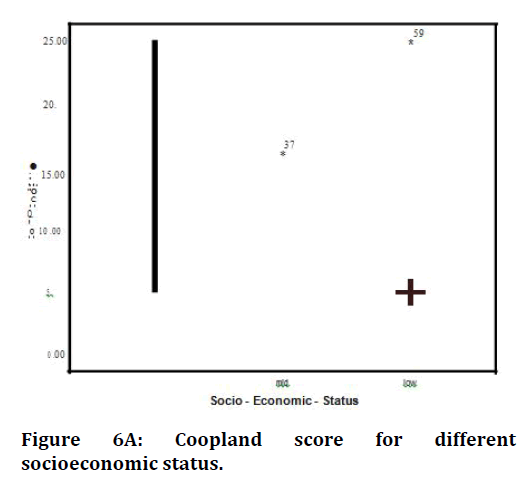 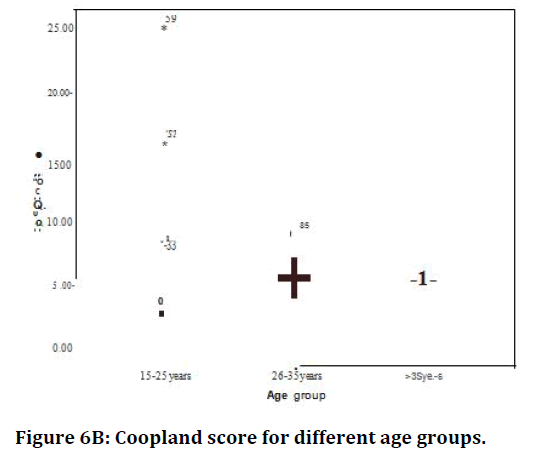 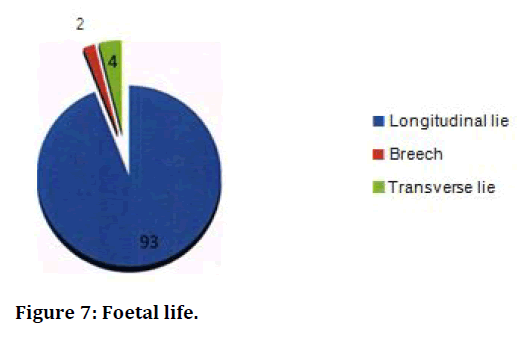 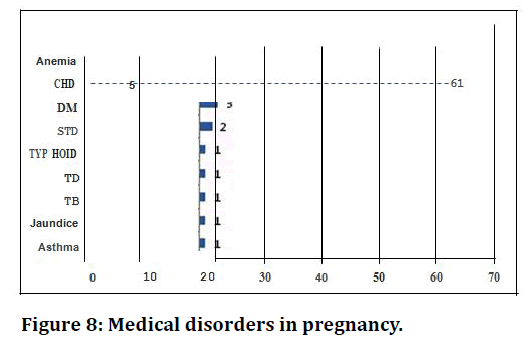 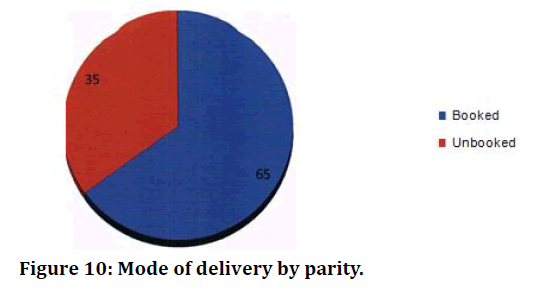 Figure 10. Mode of delivery by parity. 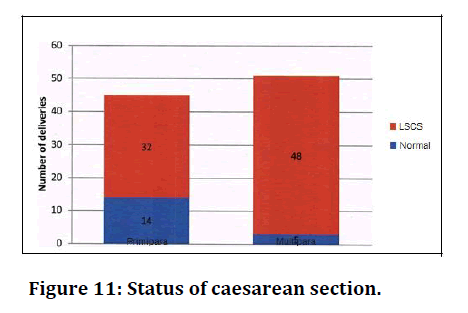 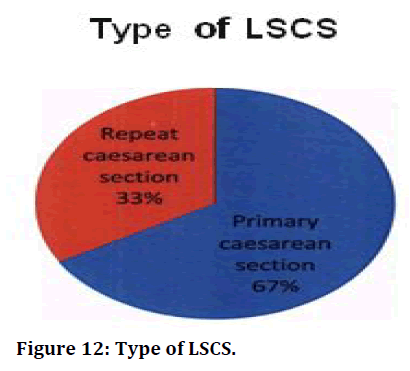 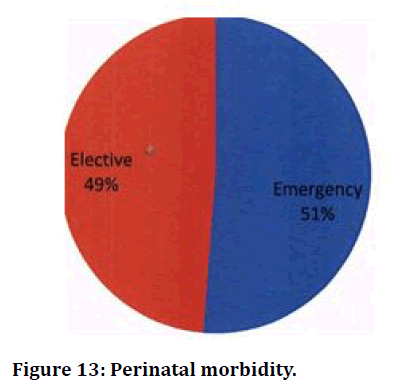 In the present study, maximum number of patients in high risk 67.3% was between age group 15-25 years. 83.8% belonged to low socioeconomic status in our study 37.1% of the high risk was from urban background. In the study group, there were 67.3% primigravidae, 28.8% multigravida & 2.9% grand multigravida. Sociodemographic determinants of pregnancy wastage was scrutinized by Banerjee et al. [14] and Gadhi et al. [15] The review of factors influencing the obstetric outcome include (a) maternal age: Pregnancy wastage 16.58% in women above 35 years (b) birth order : Highest in primi (17%) and lowest in paramour and steady rise there after (c) residence : Higher in younger women in rural setting and highest in elder women (more than 35 years) of urban origin. According to National family health survey - 3 (2005 - 2006) prevalence of anaemia in pregnancy is 57.9 % In our study most common associated medical disorder in the study was anaemia with 61.6% In total anaemic cases 48.5% cases were mild anaemic. Of these cases, 5.1 % of cases add severe anaemia. According to report from technical working group, 20 - 22 may 1991, Geneva WHO, [16] the incidence of severe anaemia is 5-8%. We have well maintained blood bank in our hospital. This helped to save many life’s of mothers. Anemia is the major risk factor requiring blood transfusion, next was abruption placenta Regarding mode of delivery, Caesarean section rate was more than that of total vaginal births. (i,e) 81.6% as against 18.4%. During labour we monitor fetal wellbeing by both intermittent auscultation and cardiotocography. As per Chandra et al. [17] Electronic fetal monitoring has high sensitivity and low specificity. We do not have the facility of fetal blood sampling, thus caesarean rate is high. In total LSCS, primary LSCS were 66.7% and rest 33.3% cases were repeat LSCS In the study group, 51.2 % cases were operated on emergency basis, 48.8% cases were elective caesarean section. 21 cases in the study group had puerperal maternal morbidity which were pyrexia, UTI, PPH, wound sepsis, DVT. There was 100 % association between preeclampsia and abruptioplacenta in our study. 30.3% had LBW baby (<2.5kg) .common in extremes of age (P=0.008) and in primipara. LBW was seen in extremes of age and in primipara (P<0.001) in our study.

In this Era of small family norm, we the obstetricians have a great role to play. Identification of a high risk pregnancy would be the first stepping stone for a better outcome, the present study also concludes the same. The study reiterates the importance of early identification of high risk antenatal mothers towards a better motherhood experience and healthy child. The study also concludes that use of Cooplands Questionnaire is particularly simple, cost effective, non-invasive, relatively non-dependent on diagnostic technologies, convenient to implement by doctors and paramedical personnel as well and to identify high-risk pregnancies and refer them for appropriate facility¬ based care.