Study of Serum ?-HCG and Lipid Profile in Second Trimester as Predictors of Pre-Eclampsia in a Tertiary Care Teaching Hospital

Introduction: Early diagnosis, close antenatal surveillance, and timely intervention are key to the management of Preeclampsia. Our aim was to study the association of serum β-HCG and lipid profile in second trimester in the development of preeclampsia. Methods: 100 pregnant women between 14–20 weeks of gestational age with singleton pregnancy irrespective of parity were selected randomly and serum β-HCG and lipid profile were estimated by chemiluminescent immunometric assay and enzymatic calorimetric test respectively. Regular follow up of cases was done till delivery. Results were analysed statistically. Results: Out of 100 women who enrolled in the study 92 women were completely followed till term. Eight women were lost to follow up. Out of 92 cases that completed the study, 14 cases developed pre-eclampsia and 78 remained normotensive. Total cholesterol, triglycerides and LDL values for those women who developed preeclampsia were significantly higher than those who remained normotensive with p value of <0.05 which is statistically significant. Serum β-HCG in preeclampsia group is significantly elevated with p value < 0.05. Conclusion: The present study indicates an increased risk of pre eclampsia in patients with elevated serum β hCG and altered lipid profile in their second trimester. Currently, no screening tests are predictably reliable, valid, and economical; however the above two mentioned tests appear to be good non-invasive early predictors of preeclampsia.

The incidence of preeclampsia in India is 8-10% and maternal mortality due to preeclampsia is 8% [2]. Preeclampsia is described as a pregnancy specific syndrome that can affect virtually every organ system; appearance of proteinuria remains important diagnostic criteria.

In view of these findings, this study was undertaken, in which both β-hCG and lipid profiles are studied in the early second trimester as early predictors of Preeclampsia. Early identification of women at risk of Preeclampsia is done which may help in taking timely preventive management to prevent or delay these complications.

This prospective study was conducted in the department of obstetrics and gynaecology, SDM college of Medical sciences and hospital, after obtaining institutional ethical committee clearance and informed consent on 100 pregnant normotensive patients who were selected randomly between the gestational ages 14-20 weeks attending the ANC clinic irrespective of parity. Women with multiple pregnancy, chronic hypertension, diabetes mellitus and congenital malformations were excluded from the study.

All women were subjected to a detailed history regarding age, parity, past obstetric history, medical history and family history. Height, weight and blood pressure were measured. Routine antenatal investigation was done. Five ml of venous blood sample was collected and tests were carried out. Estimation of serum β-hCG level was done by chemiluminescent immunometric assay method. Serum lipid profile estimation was done by enzymatic calorimetric test. The cases were followed up in antenatal clinic and were examined 4 weekly till 28 weeks, every 15 days once up to 34 weeks and there after weekly till delivery. At every visit blood pressure was recorded. Urine was examined for albumin, if blood pressure was found to be raised. Pregnancy induced hypertension (PIH) was considered if the blood pressure was ≥ 140/90 mm hg on two occasions at least 6 hours apart after 20 weeks of gestation. Preeclampsia was considered if gestational hypertension was associated with proteinuria of atleast 1+ on dipstick.

Results so obtained were evaluated and analyzed statistically. Mean ± standard deviation of all the parameters of interest were calculated for hypertensive and normotensive group and difference of means between the two groups was tested by unpaired ‘t’ test. Chi-square test was applied for categorical data. Diagnostic validity tests like sensitivity, specificity, positive predictive value, negative predictive value and overall accuracy were performed to assess diagnostic values of serum β-hCG and lipid profile in the prediction of preeclampsia. A p–value of <0.05 or less was considered statistically significant.

Out of 100 women who enrolled in the study 92 women were completely followed till term. Eight women were lost to follow up. Out of 92 cases that completed the study 14 cases developed preeclampsia and 78 remained normotensive. Mean age among PIH was 22.93 and mean age among normotensive group was 21.17. Mean BMI in PIH group was 23.94 and that in normal group were 22.70. There was no statistical significance among normal and PIH group with respect to mean age (in yrs.) (p=0.1695) and BMI (Kg/m2) (p=0.0639).

Logistic regression of prediction of PIH by other parameters shows significant association with total cholesterol, triglycerides, and serum beta hCG (Table 2). Diagnostic values of β-hCG and lipid profiles in the prediction of PIH are shown in Table 3 and ROC curve in Figure 1.

Table 3: Diagnostic validity test of β-hCG and lipid profiles in the prediction of PIH. 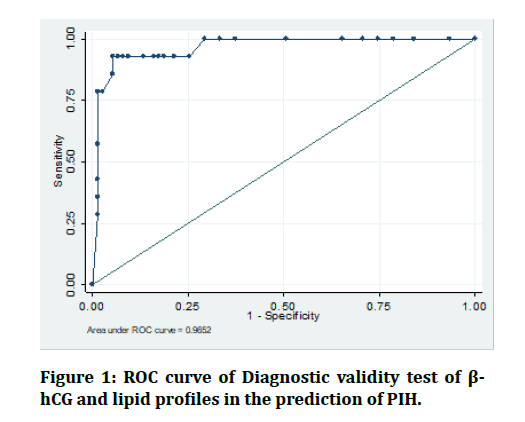 Figure 1: ROC curve of Diagnostic validity test of β- hCG and lipid profiles in the prediction of PIH.

Out of 92 cases that completed the study 14 cases developed preeclampsia and 78 remained normotensive. In a study conducted by Kiran et al. [5], 120 patients attending the outpatient department of the Obstetrics and Gynaecology of the Maharaja Agrasen Hospital were selected, out of which 21 cases developed preeclampsia and there was a statistically significant rise of cholesterol levels in pre eclampsia group. In a study conducted by Pradeepa et al [6] in 2016 at Thanjavur, women with high values of β-hCG and lipid profile in the gestational age group 14-20 weeks developed preeclampsia. In a study conducted by Vidyabati et al [1], out of 164 women attending OPD of the Department of OBG at Regional Institute of medical sciences, 29 developed PIH and there was a statistically significant elevations in β-hCG and lipid profile.

In study conducted by Pradeepa et al [6], elevated triglycerides, LDL, VLDL, total cholesterol and decrease in HDL was associated with preeclampsia. Triglycerides had 96% specificity and 97% PPV. Vidyabati et al [1] showed an association between maternal early pregnancy dyslipidemia especially raised LDL and hypercholesterolemia which was associated with the development of preeclampsia.

Maternal lipid profile and serum β-hCG in the early second trimester is a very good and a effective noninvasive test, which is economical and reliable technique which can be used in the prediction of preeclampsia before the clinical onset of the disease. If prediction is possible, prevention will follow naturally. The present study indicates an increased risk of preeclampsia in patients with elevated β-hCG and dyslipidemia and serves as a promising tool for predicting preeclampsia.

No conflict of interest among the authors.