Study to Compare the Caregiver Burden of Schizophrenia and Bipolar Disorder

Schizophrenia is a chronic and severe mental disorder affecting 20 million people worldwide. Schizophrenia is characterized by distortions in thinking, perception, emotions, language, sense of self and behavior. Common experiences include hallucinations (hearing voices or seeing things that are not there) and delusions (fixed, false beliefs).People with schizophrenia are 2-3 times more likely to die early than the general population (2). This is often due to preventable physical diseases, such as cardiovascular disease, metabolic disease and infections. Stigma, discrimination and violation of human rights of people with schizophrenia is common. Schizophrenia is treatable. Treatment with medicines and psychosocial support is effective.

WHO’s Mental Health Action Plan 2013-2020, endorsed by the World Health Assembly in 2013, highlights the steps required to provide appropriate services for people with mental disorders including schizophrenia. A key recommendation of the Action Plan is to shift services from institutions to the community.

A person with bipolar disorder will experience changes in mood, energy, and activity levels that can make day-to-day living difficult. Bipolar disorder can cause severe disruption to a person’s life, but the impact varies between individuals. With appropriate treatment and support, many people with this condition live a full and productive life. According to the National Alliance on Mental Illness (NAMI), bipolar disorder affects over 10 million people in the United States or around 2.8% of the population. On average, a person will receive a diagnosis around the age of 25 years, but symptoms can appear during the teenage years or later in life. It affects males and females equally.

The National Institute of Mental Health describe the main symptoms of bipolar disorder as alternating episodes of high and low mood. Changes in energy levels, sleep patterns, ability to focus, and other features can dramatically impact a person’s behavior, work, relationships, and other aspects of life. Most people experience mood changes at some time, but those related to bipolar disorder are more intense than regular mood changes, and other symptoms can occur. Some people experience psychosis, which can include delusions, hallucinations, and paranoia.

Between episodes, the person’s mood may be stable for months or years, especially if they are following a treatment plan. Treatment enables many people with bipolar disorder to work, study, and live a full and productive life. However, when treatment helps a person feel better, they may stop taking their medication. Then, the symptoms can return. Some aspects of bipolar disorder can make a person feel good. During an elevated mood, they may find they are more sociable, talkative, and creative. However, an elevated mood is unlikely to persist. Even if it does, it may be hard to sustain attention or follow through with plans. This can make it difficult to follow a project through to the end. Aim of the study is to assess & compare the burden, quality of life and depression in caregivers of persons suffering from schizophrenia and bipolar disorder.

Dried this study was conducted after getting ethical clearance from the University ethical committee. It is a comparative study, total sample size is 100 who satisfied the inclusion criteria, suffering from bipolar disorder and their caregivers attending the psychiatric outpatient dept. of SBMCH and gave informed consent to be included in the study.

No current or past history of Obsessive Compulsive Disorder.

Substance abuse other than nicotine

Figure 1: Income of the Family.

Figure 2: Gender of the Caregivers.

The caregiver burden was found to be significantly higher among the caregivers of persons suffering from schizophrenia, with a mean normalized BAS score of 64.25 against a score of 57.92 for bipolar subjects.

Table3: Burden, quality of life and depression in caregivers. 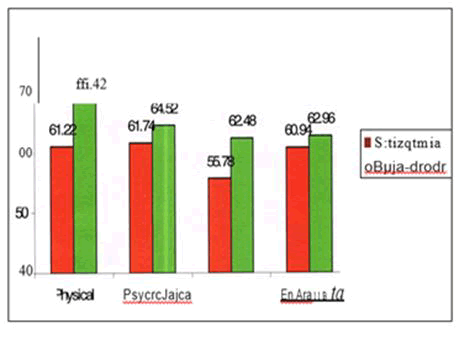 Figure 4: Quality of life of caregivers. 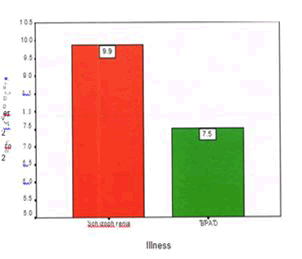 The result of the current study gave a comparison between the burden of care of schizophrenia and bipolar disorder and QOL and depression among the caregivers of persons suffering from these disorders. Socio demographic profile of the person suffering from illness. The mean _age of subjects in schizophrenia and bipolar disorder was comparable with the mean age being 34.72 years (S.D. 9.69) and 37.0 years respectively.

With regards to the marital status 78% of the bipolar subjects were married, 20% were single and only 2% were either divorced/separated. The higher rates of marriage and lower rates of divorce/separation can well be explained on the basis of south Asian ethos and reality in general and specifically in relationship to mental illnesses, wherein marriage is a social norm and divorce is not very common.

In contrast, the schizophrenia subjects were less likely to be married as compared to bipolar subjects. Only 50% of persons suffering from schizophrenia were married. This could be partially attributed to the impact of the schizophrenia illness on the ability of the subjects to enter marital relationships.

50% of the bipolar disorder subjects were working. This reflects a considerably high level of employment. This can be attributed to ready availability of unskilled work which our subjects, who were predominantly of the lower socio economic status, were willing to do in the milder stages of mania and depression and during remission.

On comparing the two groups with regards to occupation, a significantly more number of schizophrenia subjects were not working (72%) compared to bipolar disorder subjects(50% ). This reflects the severe psychosocial consequences of schizophrenia as well as the fact that bipolar disorder being an episodic illness give the patients greater opportunity to pursue occupation in the periods of remission. Also schizophrenia , especially of longer duration is associated with negative symptoms and decline of social skills which also impact ability to be gainfully employed.

Majority of both bipolar disorder and schizophrenia subjects were from nuclear families. This reflects the prevailing social trend. The nuclear families have lesser number of earning members and caregivers to shoulder the burden. The family income of both groups was similar to majority of subjects having family income less than 11,500 per month (92% m schizophrenia and 94% in bipolar disorder group).

The mean duration of illness was 10.02 years in schizophrenia group and 10.40 years in bipolar disorder group. Thus the relatively higher duration of illness in our study subjects as compared to Roychaudhuri et al could be due to SBMCH being a tertiary institute receiving a significant number of chronic patients who are likely to have received treatment with other psychiatric and non-psychiatric set ups and who had not responded adequately.

Socio Demographic Profile of the Caregivers

The severity of illness has a positive correlation with the caregiver burden. This would mean that the actual burden experienced by caregivers of bipolar disorder may be higher if matching for GAF between the two groups was done.

Our study evaluated the burden experienced by the caregivers of persons suffering from two severe mental illnesses-shizophrenia and bipolar disorder, using the Burden Assessment Schedule. The burden of schizophrenia was found to be significantly higher than bipolar disorder with mean normalized BAS scores of 64.25 and 57.92 respectively. This correlates with the results of similar studies by Chakrabarti et ai2, Roychaudhuri et al4 6, Nehra et al39 and Chadda et al72.

It is found that financial difficulties were experienced by caregivers in both the groups without significant differences. This is comparable to the findings by Nehra et al39 But worsening of families finances and worries regarding the patients future financial situation is significantly more with caregivers of schizophrenia. High financial burden in schizophrenia has been established by researchers such as Giel et al13, Moiley et al17 and Saldhana et al19

The caregivers who formed our study group experienced disruption of relations with other _family members and friends, and disruption of family stability. The relationship with friends was significantly affected in schizophrenia. This reflects the findings of early studies by Chakrabarti et al, and Gowtham and Nijhawan 30

Symptoms of depression and anxiety were reported by almost 90% of caregivers of both the groups. But frustration over slow improvement of patient and feelings of isolation and !onliness are more with caregivers of schizophrenia than bipolar disorder. The severe toll on the mental health of caregivers correlates with the findings of researchers such as Rodrigo et al77 and Li Yu Song et al78.

Appreciation for caring is a positive factor which reflects the satisfaction caregivers receive from the appreciation and acknowledgement of their good care from the friends and family members. Caregivers of schizophrenia and bipolar disorder do not significantly differ in this aspect, though a significant number of caregivers reported lack of appreciation, which has been described by Ghadge et al34 as rejection and discrimination in personal and social contexts.

Although this study was limited with time constrain, manual-steps process but it was good to establish such a study in Saudi Arabia where SCD affects many patients particularly in Eastern and South Western areas.

Further studies are recommended to identify the specific compounds of different parts of these herbs that pharmacologically cause their therapeutic activity. Moreover, dose and additive effects as well as drug-interactions are suggested in future evaluation. In addition, in vivo researches with more objective, practical and validated advanced techniques are recommended, also, to correlate all of that with the disease phenotypes in multicentre analysis on larger cohort groups to provide more understanding of the beneficial effects of such plant products.