There is also a significant increase in the levels of Total Cholesterol (TC), Triglycerides (TGL), Low-Density Lipoproteins (LDL), and a decrease in High-Density Lipoprotein (HDL) levels. The study group consisted of 45 cases and age and sex matched controls (n=45) with 25 males and 20 females in each group. When the physical parameters were compared between the two groups, there was not much of difference in age, height and weight; however we observed a statistically significant difference in the BMI among the cases and controls. It was also observed that almost 9% of the subjects in the control group had TSH levels >4.5µ1U/mL 59 while almost 24 % of the cases had TSH values >4.5 µIU/mL (table 4 and figure 10 & 11), implying that 9% of the controls and 24% of the cases have Sub Clinical Hypothyroidism, even though the average TSH values between the cases and controls are not statistically significant. a significant increase in the levels of hs-CRP among the cases. When TSH levels were correlated with that of hs-CRP levels, we observed that a strong positive correlation exists between the two parameters in cases.

So far it was thought that Coronary artery diseases (CAD) is a cholesterol storage disease, but recent studies had proved that inflammation also becomes the reason for formation of atherosclerosis. Reports says that subclinical hyperparathyroidism (SCH) will increase the level of total cholesterol and LDL. Hence it was confirmed that SCH has an associating with the development of atherosclerosis. In SCH there is a decrease is variability in heart rate suggesting hypo functional abnormalities in the parasympathetic nervous system. Added to it this cardiac oxygen consumption is also declined. Studies also say that C reactive protein (CRP) also plays an important key role in atherogenesis regulating the expression of adhesion molecules and also by increasing the lipoprotein uptake by macrophages. Hence the study aims to find the association of sub - clinical hypothyroidism and hs-CRP with that of coronary artery disease in south Indian population [1-5].

A study group of 45 patients were taken for the study. The levels of TSH. Free T4, high sensitive CRP (hs-CRP) were estimated and the results were observed.

From the results its represented that the number of cases and controls according to hs-CRP risk groups. Most of the controls fall under the mild and moderate risk group, while cases come under the severe risk groups (Table 2 and Figure 1).

Table1: Laboratory values of study parameters of the both cases and controls.

Table 2: Grading of subjects according to hs-crp. 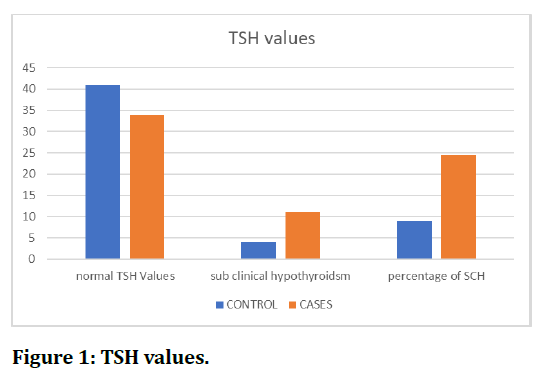 We observed that there is also a significant increase in the levels of Total Cholesterol (TC), Triglycerides (TGL), Low-Density Lipoproteins(LDL), and a decrease in High- Density Lipoprotein (HDL) levels. Further, the laboratory values showed a significant increase in the hs-CRP levels among the cases, compared to that of controls. These results highlight an impending public health issuethat remains unnoticed, in which the changes at the cellular level, accelerates atherogenesis that leaves the population with much of morbidity and mortality. Similarly, when we compared the hs-CRP levels between the cases and controls, we observed a significant increase in the levels of hs-CRP among the cases. When TSH levels were correlated with that of hs-CRP levels, we observed that a strong positive correlation exists between the two parameters in cases. In this study we observed that 25% of population with coronary artery disease had subclinical hypothyroidism, which implies that SCH is one among the condition that has to be evaluated while screening for CAD and further studies are needed to evaluate the effect of thyroxin supplement on SCH for reducing the risk of CAD in those patients. As well as elevated hs-CRP levels in any of the co morbid conditions can be useful in predicting an impending atheroma, so that appropriate aid can be provided, in order to prevent a forth coming event [6-10].