Blood is a focused body fluid in humans and other animals which makes many key roles within the body. Blood has always been one of the basic necessities of human life. Blood transfusion plays a vital role in saving the life of those patients needful transfusion. Ignorance, fear and misconception about blood donations and lack of voluntary blood donation societies are major limitations in emerging countries to facilitate voluntary blood donation. The World Health Organization (WHO) and the International Federation of Red Cross and Red Crescent Societies (IFRC) have framed guidelines and introduced relative programs to promote safe, unremunerated and voluntary blood donation programs in countries. In this regard, the present study was designed to educate the higher secondary children of a school about blood donation through a video-assisted TV program and testing them before and after the video about on knowledge about blood donation. The data clearly indicates that the post-test value of mean is high which shows that the video assisted teaching was highly effective and statistically significant. Hence, it is concluded from the present study that information education and communication activities plays an important role in creating awareness on blood donation among the young generation especially in rural areas.

Safe blood is critical for proper medical care. Access to safe blood is an important factor in avoiding the spread of infectious diseases at a global level. Human blood has no alternative to replace it. Making about 7% of the body's weight, an average adult has 6.6 to 8.5 litres of blood in his/her body. In India there is a requirement for blood every 2 seconds, making the need for blood a whopping 4 crores units every year [1]. The approximate units stored currently in India are 5 Lakh units of blood. When blood is donated, it can help more than one person as it is separated into red Blood cells, white Blood cells, plasma, platelets and used according to requirements. Platelets help cancer patients receiving treatment. Red blood cells and plasma help trauma and surgery patients providing oxygen and stop bleeding, respectively. Blood donation can help accident and burn victims, heart surgery and organ transplant patients, and those battling cancer, irrespective of their age [2].

The continuous need for blood in medical field challenges the available blood banks. During the years 2013 to 2017, a slow decline in blood collection and transfusion has been reported in the United States . Generally, to increase the blood donation, it is necessary to drive out the common misconceptions of blood donations such as blood should not be donated by the elderly, or frequently, or if on medication, etc [3]. Unless proper awareness is given, volunteer blood donation may not happen according to requirement. Blood donors, who volunteer to donate blood without getting paid (non-remunerated), are an important resource of a country. The World Health Organization (WHO) and the International Federation of Red Cross and Red Crescent Societies (IFRC) have framed guidelines and introduced relative programs to promote safe, unremunerated and voluntary blood donation programs in countries.

The safe blood that does not contain viruses, parasites, drugs, alcohol, chemicals. Blood cannot be stored indefinitely. Hence frequent donation is required. Blood donation should not become a business; hence it is necessary to insist on the importance of donating blood voluntarily. It should become an altruistic effort and duty of every individual to donate blood not just during emergencies but whenever possible. This would help innumerable number of people who are in dire need of blood [4].

Blood transfusion helps in surgical and medical emergencies, extends life and quality at the receiving end and also improves the health of the donor. In most of the countries, young people donate more blood. They form the best source of obtaining safe, unremunerated blood, making them the self-sufficient source of blood donors in any country. The first step towards free volunteer blood donation is to create awareness about the importance of it among the young minds – schools and colleges. In this regard, the present study was designed to educate the higher secondary children of a school about blood donation through a video-assisted TV program and testing them before and after the video (a quasi-experimental test) about on knowledge about blood donation. The data clearly indicates that the post-test value of mean is high which shows that the video assisted teaching was highly effective and statistically significant. Hence, it is concluded from the present study that awareness education and communication activities plays an important role in creating mindfulness on blood donation among the people, in particular the younger generation [5].

Totally there are 5 government schools out of which 4 primary schools and 1 government higher secondary school was chosen in Chennai. It is a Tamil medium school consists of classes’ 6th to 12th standard. There are 25 class rooms. The class rooms are spacious and well ventilated.

The samples were selected for this study by simple random technique, lottery method was used. All the 100 students were gathered in one place all the students were given number 1 and 2 and from them all the even numbers were taken for sampling they were 75 in number.

The sample selected for the present study is 75 students from Government School, Chennai.

Students aged between 14-17 years. Both sexes are excluded. Urban / Rural areas of Chennai.

Students studying less than 10th standard and schools of urban area and slum area. Students who are sick at the time of data collection

The research instrument was developed in English after an extensive review of literature and experts opinion. It was translated into Tamil by a language expert. The structured self-administrated questionnaire is used to access the knowledge of the students on blood donation awareness.

Part – I: Information on demographic data was collected from the selected school students on given demographic variables and coding was used for descriptive analysis.

The Content validity of tool was obtained from the experts in the concerned field of community health nursing, medicine, and from nursing experts. Modifications were incorporated in the main Questionnaire.

The data collection was analyzed by using descriptive and inferential statistics with the help of statistician. Data was tabulated and percentage was obtained.

• Chi square test was used to associate the selected demographic variables with level of knowledge, on blood donation awareness

Pilot study is a small – scale version or tried run of a proposed study conducted to refine the methodology. The function of the study is to obtain information and assess feasibility of the study for improving and to decide the plan for data analysis, preliminary research conducted to test the element of the design before the actual study begins.

The pilot study was conducted in rural area at the selected school to test the feasibility and practicability .The investigator approached the subjects, and informed regarding the objective of the study and obtained the consent after the subjects about the confidentiality of the data. Totally 10 students those especially who are studying 11th and 12th were selected. The investigator visited the school personally to obtain permission to conduct the study. From all 10 students the data was collected through a structured questionnaire. The students responded well to the question and they were very co-operative. All the 10 students were found in lack of knowledge regarding blood donation awareness.

The video teaching program and the tool were found to be suitable with little corrections. All the respondents understood the use of blood donation and its basic information. Thereafter, the investigator have planned to proceed for main study.

Demographic Variables among the Students 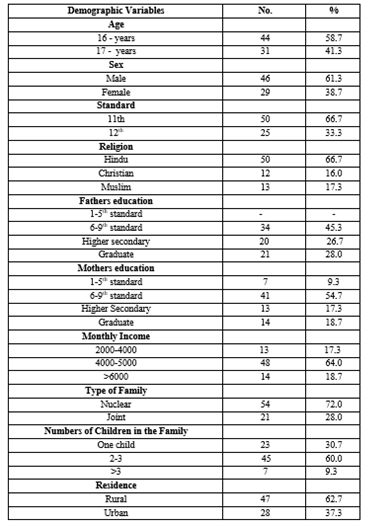 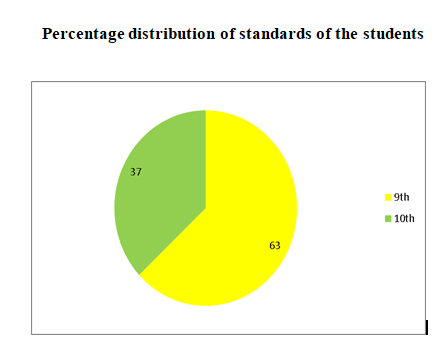 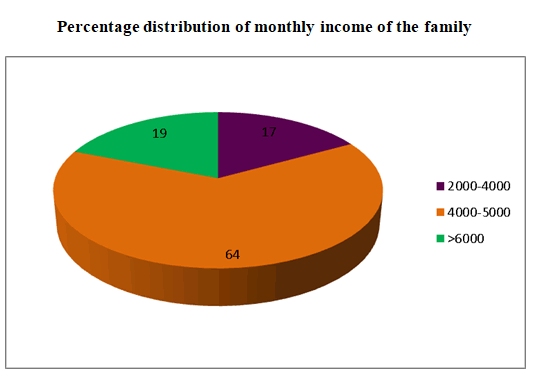 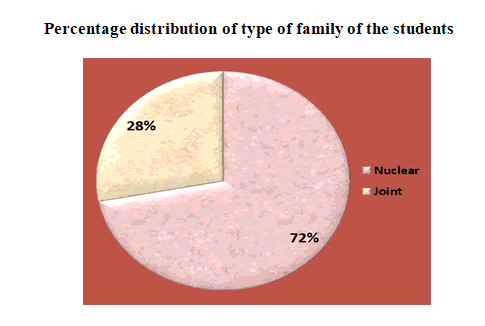 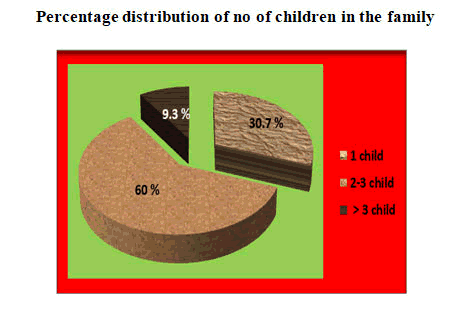 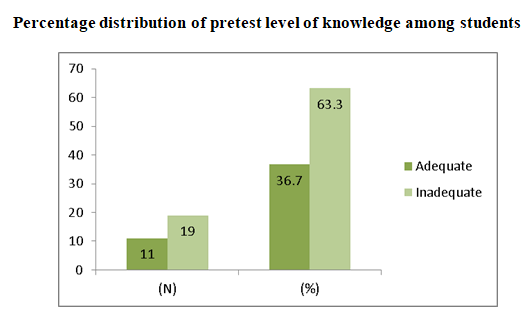 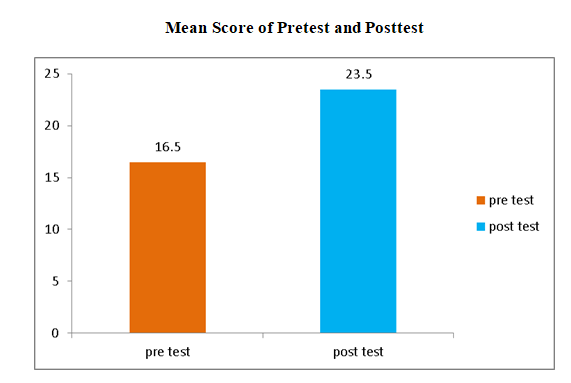 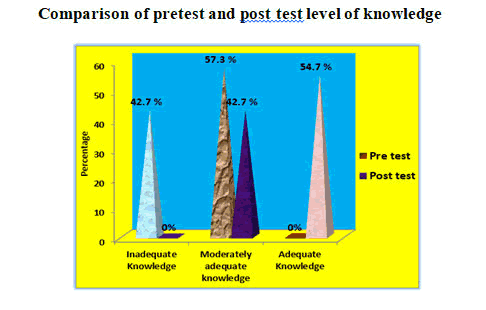 The present study was done to assess the effect of video assisted teaching program on spreading awareness of blood donation among students of 9th and 10th standards. The necessary statistics for this study was used - descriptive statistics (distribution, mean, standard deviation) and inferential statistics (‘t’ test). Based on the results obtained the objectives of the study are satisfied. The first objective was to assess the knowledge level among the students regarding blood donation. 43% of the selected students from 09th and 10th standards had poor knowledge on blood donation; the rest (57%) showed moderately adequate knowledge. The second objective was to check if video assisted teaching was effective. The increased post test results showed that the video assisted program was extremely effective with zero poorly understood students post the test.

The third objective was to study the association between the demographic variables with the blood donation knowledge. These results showed that age, religion, parents’ education, number of children and their residence were statically insignificant. The standard of education of the students were alone significant (p=<0.000). This shows that though they are formally educated, they still require awareness programs. Similar results were observed in other studies.

The present study shows an average prevalence of knowledge and attitude among the study subjects whereas when it comes to practice it was found to be less. There should be a regularly scheduled awareness creation and voluntary blood donation campaigns organized at the community level. In conclusion, this may help these youngsters to spread awareness about blood donation amongst their friends and become active blood donation volunteers themselves in future.