The Effect of Foot Bath Therapy on the Dynamics of Cortical Oscillatory Waves in Healthy Humans: An EEG Study

Purpose: Foot bath therapy is a complementary medicine technique that induces sensations of comfort and relaxation. The effect of this therapy on electroencephalogram (EEG) has not been reported. The aim of this study was to examine the effect of foot bathing therapy on EEG in young healthy humans.

Methods: Seventeen healthy males (median age=19.78 years, SD=2.03) volunteered for the study. Before commencement of the study, the participants rested for 10 minutes in order to stabilize autonomic parameters. Thereafter, EEG recording was conducted. Five minutes after EEG tracing was obtained, foot bathing therapy was done for a period of 15 minutes. A second EEG recording was carried out after therapy.

Results: The power of the gamma frequency band of the EEG increased in both hemispheres (pË?0.05) after foot bathing therapy compared to the EEG tracing obtained before therapy.

Conclusions: Therefore cortical gamma waves of the EEG could be used as measures of functional activation of the brain, related to footbath therapy.

Foot bathing is a simple technique in complementary medicine that induces sensations of comfort and relaxation [1-3] and has been shown to have positive effects in health and disease. The procedure involves gentle immersion of the person’s legs and feet from the knees down in a basin of warm water [4,5]. In heart rate variability study [1], it was reported that warm water footbath led to an increase in parasympathetic and decrease in sympathetic tone. Furthermore, foot bathing was associated with serum IgA elevation and reduction in cortisol level. A similar result was recently reported elsewhere [6].

The positive influence of foot bathing therapy has been reported for different categories of patients including cancer [7] and stroke patients [8]. For instance, Park et al. reported that foot bathing significantly increased quality of life by regulating skin temperature and attenuation of neurotoxicity [7]. In another study, it was shown that footbathing therapy reduced post-operative pain, normalized systolic and diastolic blood pressure values as well as heart and breathing rates [9]. Despite growing interest on this complementary therapy technique, little or almost nothing is known about the effects of this therapy on central nervous system functions. Consequently, there is dearth of data on the effect of foot bathing therapy on brain functions.

Central nervous system, in particular, brain functions are widely investigated using electroencephalography, a noninvasive electrophysiological technique for studying cortical activities in normal and pathology [10-12]. The cortical activities are usually reported in different frequency bands of electroencephalogram (EEG) as delta (δ), theta (θ), alpha (α), beta (β) and gamma (γ) waves. These frequency bands are the major waves of the EEG that represent cortical processing of information in different domains, including sensorimotor, emotional, cognitive [10,13]. The effects of foot bathing therapy on cortical activities as recorded by EEG in healthy humans are not known. In a recent report, our research group showed that foot reflex therapy increased activation of frontal cortex that resulted to significant increase in beta and gamma spectral powers of EEG [14]. The study showed that beta and gamma waves can serve as measures of frontal brain activation in foot reflexotherapy. Unfortunately, however, no such functional measures have been identified for foot bathing therapy. To this end, this study was conducted to investigate the effect of foot bathing therapy on the EEG activity in the healthy humans.

Participants were seventeen healthy men (mean age ± standard deviation, 19.78 ± 2.03). All participants were right-handed based on self-reports that were confirmed by Edinburgh Handedness Inventory [15]. They also had comparable education level (9-11 years).

The study involved only males that were willing to participate. Only participants without any known health problem such as respiratory, metabolic, cardiac, psychiatric or central and autonomic nervous system disease were allowed to participate. This is because these diseases may affect the EEG tracing. People with a history of drug use did not participate in the study.

The study excluded participants that were not willing to be involved. Those who had respiratory, metabolic, cardiac, psychiatric or central and autonomic nervous system disease were not involved. Individuals using medications or drugs were not considered for participation. Those who fail the drug abuse test were excluded from the study.

The experimental protocol was in accordance with international ethical standards. The study was carried out in accordance with the Helsinki Declaration (1975, revised in 1996-2013) and approved by the local ethics committee. The aims and objectives of the study were explicitly explained to the participants before commencing the experiment. All participants gave a preliminary written informed consent to participate in the study. The written informed consent was confirmed by all participants on the day of the experiment. Before commencement of EEG recording the participants were allowed to relax in an arm chair for 10 minutes. EEG recoding was conducted in all participants before commencement of foot bathing therapy. Thereafter, footbath was performed and was applied for duration of 15 minutes in each participant. After this therapy, a second EEG recording was conducted.

The participant’s legs and feet from the knees down were gently immersed in a basin of warm saline water (1.5% NaCl) at temperature (38°C-42°C) for 15 minutes. The therapy was applied in morning between 9:00 AM and 10:00 AM, while participants sat comfortably in an arm chair under maximum relaxation.

All EEGs were recorded with eyes open 5 minutes before and 5 minutes after the footbathing therapy. The EEG recording was performed according to the standard international 10/20 system. EEG tracing was obtained by two channel bipolar montage placed in the right hemisphere (F4-F8) and the left hemisphere (F3-F7). The PowerLab 26T (AD Instruments, Bella Vista, Australia) was used for acquisition of digital EEG data. The EEG data in this study was extracted before and after foot bathing therapy. EEG frequency bands considered for analysis were delta (1-3 Hz), theta (4-7 Hz), alpha (8-12 Hz), beta (13-30 Hz), and gamma (31-80 Hz) waves.

Analysis of EEG signal was performed in MATLAB. A value of 1000 Hz was used as sampling frequency and 50 Hz notch filter was applied. Hamming window was utilized for processing. The frequency and amplitude of the EEG were analyzed by power spectrum, calculated as total power in microvolts-squared divided by frequency (μv2/Hz) [16]. Discrete Fourier Transform (DFT) was used to calculate the power spectrum of time domain discrete EEG signal. Power spectral density (PSD) defined as frequency response of a periodic or random signal, shows distribution of signal strength depending on the frequency. The EEG data were recorded is a time domain discrete signal.

PSD can be expressed with equation 1:

Where N is the number of samples and xi(k) is DFT of the time domain discrete xi(n) signal.

xi(k) is calculated as shown in equation 2:

The SPSS statistical software package (SPSS, version 18.0 for windows) was used to perform all statistical calculations. The pattern of distribution was evaluated by one sample Kolmogorov Smirnov test. Paired student’s t test was used for comparison. Results are expressed as mean ± standard deviation (SD) as well as percentage (%). Differences were considered statistically significant at p˂0.05.

In the present study, EEG tracing of the F4-F8 (right brain hemisphere) revealed that both power (μv2/Hz) and percentage of gamma wave increased after the application of foot bathing therapy (power: t=2.76, p=0.02; percentage: t=2.89, p=0.01). Significant reduction in EEG tracing of the right hemisphere after therapy was not observed except for alpha power (t=2.27, p=0.04) (Table 1).

Table 1: Powers and percentages of EEG bands before and after footbath therapy in the right brain (F4-F8) hemisphere

Table 2: Powers and percentages of EEG frequency bands before and after foot reflexotherapy in the left brain (F3-F7) hemisphere 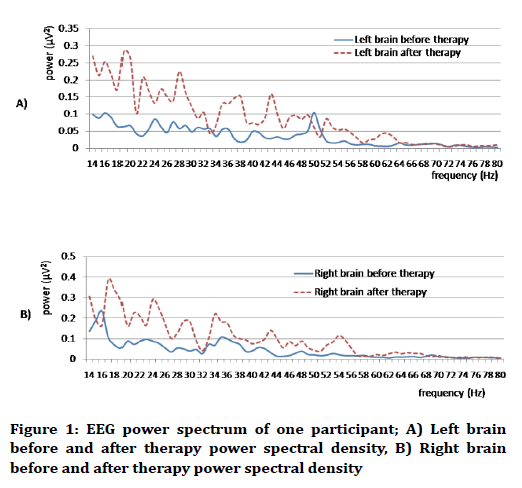 Footbathing is a complementary non-invasive adjuvant therapy that does not need any special or expensive equipment. For the first time, our study showed that footbath therapy increased gamma band frequency of the EEG in left and right frontal hemispheres in healthy humans. Furthermore, foot bathing was associated with increase in beta and gamma spectral powers and the percentages in the left frontal brain. Significant results were also observed for the percentages of theta, beta and gamma waves in the left hemisphere after footbath therapy. However delta spectral power of the left frontal brain was decreased. Thus this study showed that footbath therapy resulted to frontal cortex activation as evidenced by increase mainly in beta and gamma waves.

Gamma wave is known to be important for cognitive processes [17]. Animal and in vitro studies have revealed possible underlying mechanisms of gamma rhythm generation. Investigations on animal models have shown that gamma waves possibly play a role in mediating information transfer in the central nervous system [18]. However, little is known about the neurochemical basis of gamma oscillations in cognition. Beta waves represent sensorimotor rhythm and are also related to cognitive processing and motor control [19]. Beta wave is associated with conscious state, and is normally observed in the fronto-central regions of EEG tracing [18]. The basis of beta wave is thought to occur as a result of inhibitory cortical transmission mediated by gamma aminobutyric acid-the major inhibitory neurotransmitter in the nervous system [20-22]. Other waves of the EEG, in particular, delta, theta and alpha waves have been discussed in a previous paper [14].

Disproportional response of the right and left brain hemispheres to stimulation has been reported by a couple of researchers [29-31]. The left hemisphere appears to be predominantly parasympathetic, while the right hemisphere is sympathetic [29,30]. Thus brain autonomic control is asymmetrical [31]. Though there are still controversies regarding which hemisphere dominates in different tasks or stimulation [32-36], cortical lateralization of parasympathetic and sympathetic activity in several physiological and pathological conditions is not completely understood [29]. Furthermore, the changes in EEG frequency bands associated with cortical lateralization of parasympathetic and sympathetic activity in different physiological conditions or stimulation are not fully known. This study suggests that the behavioral relaxation (i.e. parasympathetic activation) due to foot bathing is associated with left brain activation of delta, beta and gamma powers, while the right brain showed significant activity for only alpha and gamma powers. Though we did not assess the degree of relaxation of the participants, future research will investigate effect of foot bathing on cortical oscillations before and after sleep using EEG, ECG-Heart rate variability, EMG, selected hematological and neurohormonal indices as well as psychological questionnaires.

Footbath therapy produced a significant increase in the gamma oscillations of the EEG in both hemispheres (p˂0.05). Only the left frontal brain showed significant activation of beta and gamma oscillations following foot bathing. Significant increase in the percentages of theta, beta and gamma waves in the left hemisphere was observed after footbath therapy. But there was decrease in delta spectral power of the left frontal brain. Footbath therapy as a non-invasive harmless therapeutic technique can be confidently used not only to decrease psychological stress, but also, improve cognition.

Availability of Data and Materials

The datasets used and/or analyzed during the current study are available from the corresponding author on reasonable request.

AKA, FHM, HYU, NC and SCBP collected the raw data, CU analyzed EEG signal by using MATLAB. SD analyzed statistically and interpreted the data with the assistance of MOW. All authors designed the study and read and approved the final manuscript.

Ethics Approval and Consent to Participate

We would like to thank all participants who gave up their time to be involved in the study.