Introduction: The primary issue with soft liners is their debonding from the denture base material after a period of usage. Aims: This study aims at evaluating the effect of oxygen and argon plasma treatment on the shear bond strength of soft liner material to CAD-CAM acrylic denture base. Materials and Methods: CAD-CAM acrylic specimens were prepared (n=20 pairs), with the dimensions (75 × 13 × 13 mm) length, width and thickness, respectively, with a 3 mm depth stopper. Ten pairs of specimens were plasma treated for 5 minutes. Then, heat-cured soft liner was added joining each two specimens. Shear bond strength (SBS) was then analyzed using universal testing machine. Vickers microhardness, contact angle, FTIR and AFM were also analyzed. The results were statistically analyzed using T-paired test (α=0.05). Results: The SBS of plasma treated samples were significantly higher than that of the untreated samples (p<0.001). Microhardness was not significantly affected, and contact angle got significantly higher following plasma treatment. Conclusion: Oxygen and argon plasma treatment has efficiently increased SBS between CAD-CAM acrylic and soft liner without affecting the material’s bulk properties.

Patients with edentulous ridges suffer from continuous ridge resorption which results in denture failure, discomfort and pain [1]. These issues can be resolved by the use of resilient denture liners [2]. Soft lining materials, compliant viscoelastic materials, have become commonly used in dental practice for reshaping denture surfaces that are in contact with the soft tissue of the oral cavity [3]. They provide cushioning effect which aids in the distribution and reduction of the functional forces, and help the tissue recover from trauma giving comfort to the patient [4]. However, the main shortcoming of soft lining materials is their debonding from the denture base after a period of usage, which may create an environment for potential bacterial growth, thereby expediting the breakdown of the material [5, 6].

The literature, on the other hand, has shown a paucity of information regarding the bonding of CAD-CAM resins to soft liners.

To overcome the problem of debonding between acrylic resins and soft liners, researchers have studied various methods of denture surface modification prior to applying soft lining material. One of the tested methods is plasma treatment, a gaseous mixture of free radicals, high-energy electrons and ions [9].

There are widely accepted tests for evaluating soft liners mechanical properties, like tensile, peel and shear bond strength testing. Al-Athel and Jagger had concluded that shear bond strength best replicated how a liner functions in the oral cavity [13].

Twenty CAD-CAM (XT-Cera, China) specimens for testing shear bond strength were prepared. Each specimen consisted of two blocks with dimensions of (75 × 13 × 13 mm) length, width, thickness, respectively, with a 3 mm depth stopper [14]. One block is placed over the other, leaving a space in between for the soft liner material application. The shape of these specimens was created using AutoCad software. The design was then sent to a lab technician to mill the CAD-CAM blocks into the designed shape using a dental CAD-CAM machine (Figure 1). Specimens for testing microhardness (n=20) were cut in the same way (12 × 12 × 3 mm) [15]. Specimens for testing wettability (n=20) were also prepared (20 × 15 × 2 mm) [16]. All of the specimens were then cleaned by washing with a 1% detergent solution (liquid soap and water) and then with distilled water in an ultrasonic cleaner for 15 minutes. After that, they were dried in the air, then immediately placed in the sample holder inside the plasma chamber [17]. Ten specimens for each test were treated with plasma. A mixture of argon and oxygen gases was used in a plasma jet for surface treatment of the specimens. Plasma treatment was done by using DC-glow discharge plasma device (homemade at Ministry of Science and Technology, Iraq); the apparatus was equipped with a direct current (DC). Bonding surfaces of the SBS specimens and the other tests specimens were placed on the center of the cathode surface at a right angle to the gas flow with a 4 cm distance. Gas pressure was maintained at 4 × 10-2 mbar. The plasma was excited by a combination of direct current (DC) voltage supply working up to 650 V and a maximum DC of 30 mA. A uniform glow could be seen directed on the samples. All of the specimens were exposed to plasma for 5 min.

At the end of plasma exposure time, the chamber was kept locked for an extra 15 min for the gas to be evacuated; the specimens were then repurchased and covered with a cling film for isolation.

For each SBS test sample, two acrylic specimens were mounted facing each other; forming a space between them measuring (13 × 13 × 3 mm) width, length, and depth, respectively. The two specimens were secured with clear tape and then submerged completely in laboratory putty (Zetalabor, Italy) and left to set completely. To facilitate flasking, a custom-made flask was designed to match the samples size. The silicone containing the sample was then invested inside stone and allowed to set. Following that, the samples were extracted from the silicone to remove the tape and reinserted into the silicone.

Heat cured soft liner (Vertex-soft, Netherlands) was prepared according to manufacturer’s instructions. Once the material has reached its dough stage, it was incrementally inserted and condensed into the space between each two blocks using a metal mixing spatula; the space was overfilled, the flask was then covered under pressure (1kg) and firmly screwed until edge-toedge contact was achieved.

The flask was then put in a digital water bath for curing. According to the manufacturer’s instructions, the curing cycle was performed by heating water up to 70°C for 90 minutes, then elevated up to 100°C for 30 minutes. After curing, the flask was removed from the water bath, and bench cooled for 30 minutes, followed by 15 minutes of cooling under tap water to ensure complete cooling [18]. The flask was opened and the samples were extracted and finished using a sharp blade to cut any excess and then stored in a container filled with distilled water.

Contact angle reflects the wetting of the substrate by a liquid. It is an essential parameter in measuring the wettability and the free surface energy of surfaces—the greater the contact angle, the lower the wettability value. Contact angle of the treated and untreated CAD-CAM acrylic surfaces was captured using an optical tensiometer (TL 1000, Theta Lite, OneAttension, Biolin Scientific, Lichfield, UK). A drop of distilled water was used at room temperature. In this technique, a graduated syringe with hydrophobic needle deposits a drop; after 5 sec the contact angle is calculated with 60 images per second over 10 seconds. The images captured were analyzed using the special software of the microscope. This software automatically drew a tangent; the angle located at the three-phase-lines air/solid/liquid was measured to give the contact angle value.

To understand the chemical surface changes of CAD-CAM denture base material after plasma treatment, the specimens’ surfaces were investigated using FTIR analyzer (Fourier Transform Infra-Red Spectrophotometer, Bruker, Germany). Specimens were prepared with the exact dimensions of wettability test specimens (20 × 15 × 2 mm). The FTIR spectra were obtained using a potassium bromide disk and attenuated total reflection (ATR) techniques of FTIR spectroscopy with a resolution of 4 cm−1 and 32 scans in the range of 4000 to 400 cm-1.

Atomic force microscopy was used to study and compare the surface topography/morphology of untreated and plasma-treated acrylic polymer specimens. Specimens with the same measurements of wettability test specimens (20 × 15 × 2 mm) were prepared.

Analyses are conducted with the assistance of statistical analysis software (IBM SPSS Statistics 26). The mean values obtained were evaluated using paired sample Ttest. Statistical significance was declared for all comparisons when the p value was less than 0.05.

The mean values of the microhardness of the CAD-CAM acrylic surface had a non-significant change (p>0.05). Table 1 also shows a significant increase of contact angle mean values following plasma treatment (p<0.001), implying that the wettability has improved significantly.

Analyses of the chemical composition of the surfaces of each of the control and treated groups were performed using an FTIR analyzer (Figure 2). The two- and threedimensional images obtained by the AFM analysis are shown in (Figure 3). AFM analysis of plasma treated CADCAM acrylic surface has shown a more uniformly distributed granular film when compared to that of the untreated surface (Figure 4). 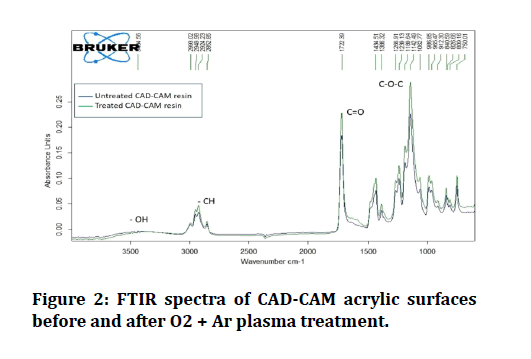 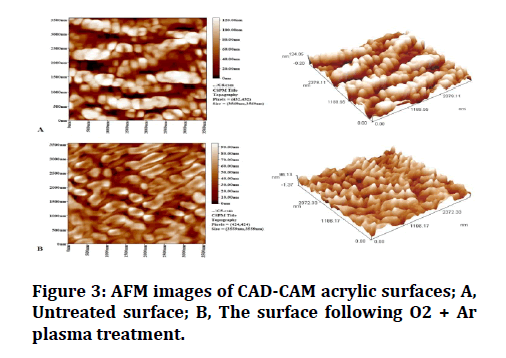 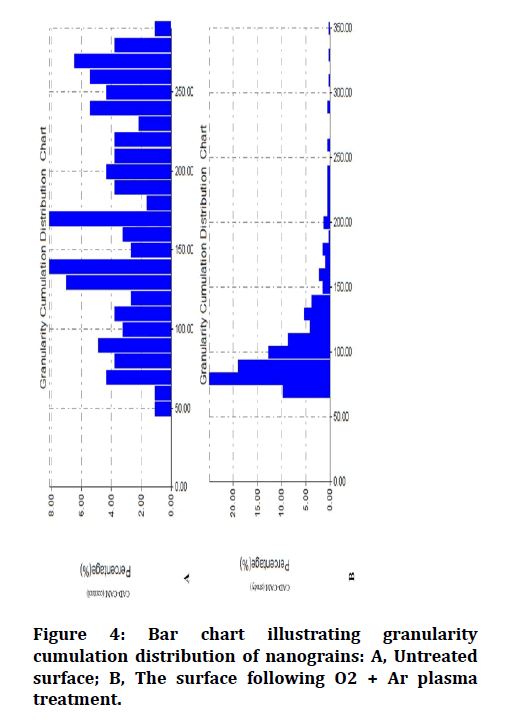 There was an increase in the mean values of average surface roughness following plasma treatment (55.1 nm), when compared to the control group (22.7 nm).

In clinical practice, soft lining materials are subjected to shear and tearing forces. The shear strength test has been deemed suitable for in vitro studies [13]. Using CAD-CAM machines for fabricating acrylic dentures is a relatively new technology, and there are limited studies regarding the bonding of this type of resin to soft liners [7]. As such, in the current study, the effect of oxygen + argon plasma treatment on SBS between CAD-CAM acrylic and soft liner was evaluated.

This enhancement may be attributed to the fact that oxygen gas in plasma treatment induces an etching process by chemically removing particles from the surface material. Furthermore, the chemical oxidation reaction generates new chemical functional groups on the treated surface, such as hydroxyl group.

It also increases the surface energy, thereby enhancing the penetration of soft liner into the irregularities and strengthening the adhesion between the two materials [10, 19]. Although argon is an inert gas and inert gas plasma treatments do not induce any new reactive functionality onto the polymer surface, treatment with inert gases could induce free radicals formation on the polymer surface through ion bombardment and ultraviolet radiation [12].

The results of SBS are supported by the contact angle measurements, which revealed that the treated group's contact angle was significantly lower than that of the control group. This substantial drop in the contact angle may indicate the grafting of new polar functionalities onto the surface, reactive groups open bonds on the surface, increasing surface energy and consequently the wettability [21].

There was no significant change in microhardness, which coincides with the conclusion of Dos Santos et al [22], that plasma treatment did not affect the microhardness of acrylic denture resin, making it a suitable method for surface modification when compared to other treatments [22].

Microhardness being preserved can be supported by the findings of FTIR surface chemical analysis that had shown no change in peak positions, indicating that the hybridization state and electron distribution within the molecular bond have remained constant. This means that plasma treatment did not affect the chemical structure of these acrylic materials, which coincides with the FTIR results of Mustafa’s study [14].

However, the peak intensities of all functional groups (C=O, C-O, and C-H) have increased, implying an increase in the amount (per unit volume) of these functional groups [23]. As explained earlier, oxygen plasma treatment induces the formation of functional groups on the polymer surface, increasing the surface hydrophilicity.

AFM of the control group of the CAD-CAM acrylic material revealed uneven distribution of granular film surface. In comparison, the AFM of plasma treated specimens had shown a more uniform granular film distribution, with an increase in average surface roughness producing new nanograins with smaller diameters.

These findings coincide with the AFM findings of Dorranian et al, confirming that plasma treatment degrades the surface irregularities to bear polar groups and removes the materials with less attachment energy to the surface; i.e physical sputtering [24].

This change in surface morphology is assumed to be caused primarily by the surface being bombarded by high-energy ions present in the plasma. It indicates that plasma treatment improved the cross-linking phenomenon [25].

The test settings may not represent the clinical scenario because the specimens designed for the study contained several adhesive surfaces, yet in clinical cases, dentures have only one adhesive surface. Thus, in vivo investigations should also be carried out. Meanwhile, the results of this study may serve as a baseline for future research into novel materials and other variables affecting bond strength.

Within the limits of this study, it was concluded that 5- minutes oxygen + argon plasma treatment was effective in increasing the shear bond strength of heat cure soft liner material to CAD-CAM acrylic, without impairing chemical structure and microhardness of CAD-CAM acrylic material.

Department of Prosthodontics, College of Dentistry, University of Baghdad, Iraq