The Effects of Carbamylation on HBA1C in Chronic Renal Failure Patient

P Ravisekar and B Shanthi*

Chronic renal failure occurs, when disease or disorders damages the kidneys so that they are no longer capable of adequately removing fluids and wastes from the body or of maintaining the proper level of certain kidney - regulated chemicals in the blood stream. It is caused by several diseases and inherited disorders, but the progression of chronic kidney failure is always the same. The kidneys, which serve as the body's natural filtration system, gradually lose their ability to remove fluids and waste products (urea) from the bloodstream. They also fail to regulate certain chemicals in the bloodstream, and deposit protein into the urine. Chronic kidney failure is irreversible, and will eventually lead to total kidney failure, also known as end stage renal disease (ESRD). Without proper treatment intervention to remove wastes and fluids from the bloodstream, ESRD is fatal. Glycated hemoglobin (hemoglobin A1c, HbA1c, A1C, or Hb1c) is a form of hemoglobin that is measured primarily to identify the average plasma glucose concentration over prolonged periods of time. This serves as a marker for average blood glucose levels over the previous 3 months prior to the measurement as this is the half-life of red blood cells. Our present study based on the estimation of HbA1c level in diabetic patients with and without chronic kidney diseases (CKD) and HbA1C on serial monitoring can be marker for assessing renal disease.

Chronic kidney failure describes the gradual loss of kidney function or it is a progressive loss in renal function over a period of months or years. Kidneys filter wastes and excess fluids from your blood, which are then excreted in the urine. When chronic kidney disease reaches an advanced stage, dangerous levels of fluid, electrolytes and wastes can build up in our body. In the early stages of chronic kidney disease, you may have few signs or symptoms. Chronic kidney disease may not become apparent until kidney function is significantly impaired. Chronic kidney disease is identified by a blood test for creatinine, which is a breakdown product of muscle metabolism. Higher levels of creatinine indicate a lower glomerular filtration rate and as a result a decreased capability of the kidneys to excrete waste products. Creatinine levels may be normal in the early stages of CKD, and the condition is discovered if urinalysis (testing of a urine sample) shows the kidney is allowing the loss of protein or red blood cells into the urine. To fully investigate the underlying cause of kidney damage, various forms of medical imaging, blood tests, and sometimes a renal biopsy (removing a small sample of kidney tissue) are employed to find out if a reversible cause for the kidney malfunction is present [1].

Transplantation aside, high -intensity home hemodialysis appears to be associated with improved survival and a greater quality of life, when compared to the conventional three-timesa- week hemodialysis and peritoneal dialysis. [9] Uremia is a clinical syndrome associated with fluid, electrolyte, and hormone imbalances and metabolic abnormalities, which develop in parallel with deterioration of renal function. Uremia more commonly develops with chronic kidney disease (CKD), especially the later stages, of CKD, but it also may occur with acute kidney injury (AKI) if loss of renal function is rapid. Glycated hemoglobin (hemoglobin A1c, HbA1c, A1C, or Hb1c) is a form of hemoglobin that is measured primarily to identify the average plasma glucose concentration over prolonged periods of time. It is formed in a non -enzymatic glycation pathway by hemoglobin's exposure to plasma glucose. HbA 1 c is a measure of the beta -N-1-deoxy [9-11] fructosyl component of hemoglobin. Normal levels of glucose produce a normal amount of glycated hemoglobin. As the average amount of plasma glucose increases, the fraction of glycated hemoglobin increases in a predictable way. This serves as a marker for average blood glucose levels over the previous 3 months prior to the measurement as this is the half-life of red blood cells.

This study was conducted in the Department of Biochemistry, Sree Balaji Medical College and Hospital, Chromepet, Chennai during the period of January 2014 – June 2015 among 50 Diabetic patients with chronic renal failure visiting the nephrology outpatient services of the Department of nephrology and 50 diabetic individuals without chronic renal failure, who came for routine check - up in diabetic outpatient service, department of medicine. The groundwork for the study was started after getting clearance from the research committee and the Institutional human ethical committee (reference number for approval: 002/SBMC/ IHEC/2014 -2) of Sree Balaji Medical College and Hospital, Chromepet, Chennai.

The study was explained to the participants and informed consent obtained from them before taking the blood sample. The blood samples were collected from subjects by venipuncture fasting (8 hours overnight fasting) samples were collected under aseptic precautions. Estimation of Fasting plasma glucose by GOD/ POD enzymatic photometric Method, HbA1 c by Ion Exchange Resin method, Serum Urea By Using Berthelot, Serum Creatinine By Alkaline Picrate Method.

Results are described in the form of Tables (Tables 1-3) and Figures (Figures 1-4). 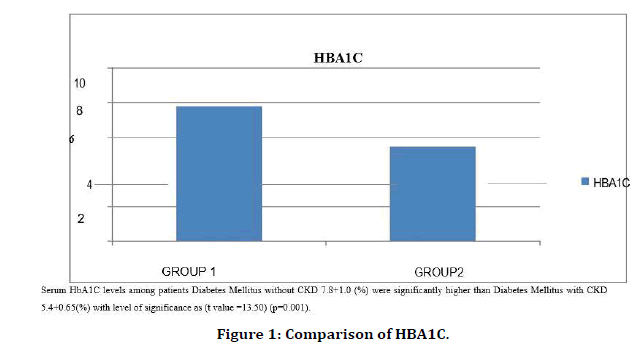 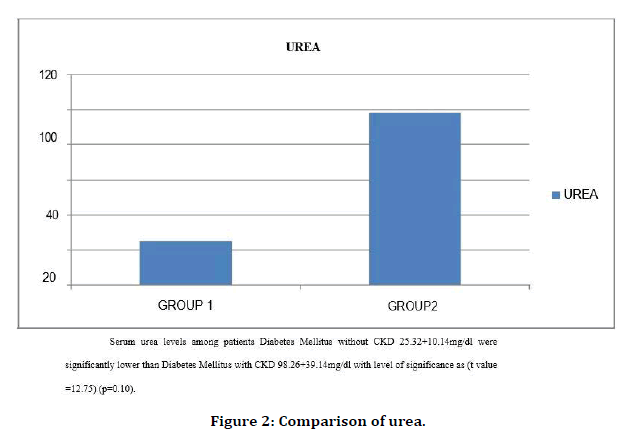 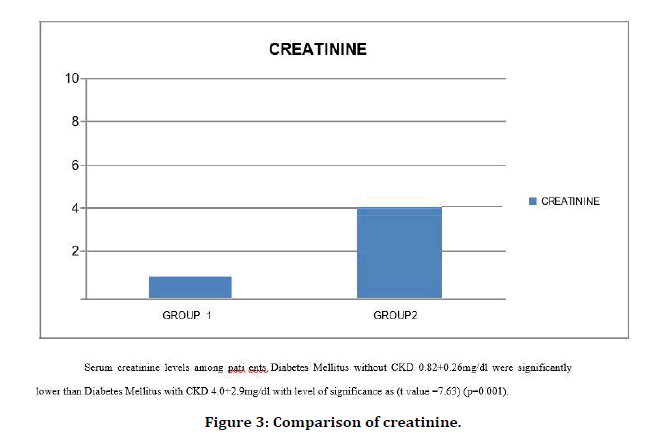 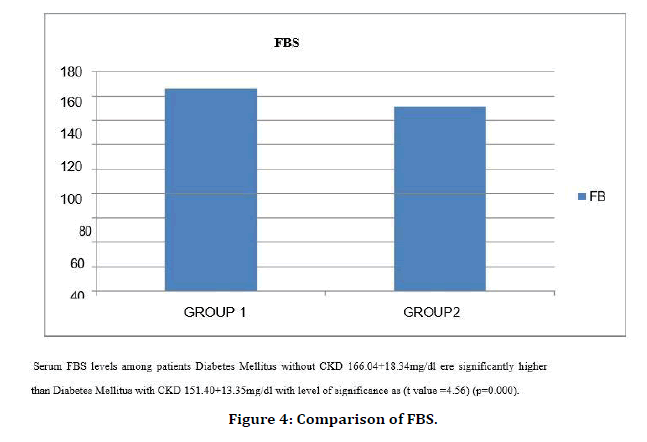 This study was done on Diabetic with Chronic Renal Failure. Age, Sex matched diabetic individuals were taken as controls. In diabetic patients with end -stage renal disease, erythrocyte lifespan tends to be decreased. This may result in part from iron deficiency anemia, recent transfusions, or other effects of kidney disease on erythrocyte survival. Uremic patients with blood urea nitrogen levels greater than about 85 mg/dL also develop significantly high levels of carbamylated hemoglobin, which interferes with some. HbA1c assays in spite of these complications, HbA1c (measured with an assay that does not cross -react with carbamylated hemoglobin) has been shown to correlate well with average blood glucose levels in diabetic patients on hemodialysis, with questionably significant overestimation of average blood glucose for values of HbA1c greater than 7.5% [12,13]

Other factors, such as chronic alcohol, opioid, and salicylate abuse and ingestion of large amounts of vitamin C and E have been reported to skew A1c results [11,12,14]. Given the lack of large studies, the sometimes-contradictory conclusions of these reports, and the unclear mechanisms of these effects, it is impractical to dismiss A1c as invalid in all these cases. However, knowing that these effects may exist can help guide decision -making in situations in which the index of suspicion for an inaccurate A1c is already high [15-17]. Chronic renal failure develops in many diabetic patients. The role of glycemic control and the value of HbA1c in diabetic subjects with renal disease are controversial. While interference from carbamylated Hb can be evaluated, the role of renal anemia, erythropoietin intake, and other factors in chronic renal failure is more difficult to evaluate. Recent reports suggest HbA1c underestimates glycemic control in diabetic patients on dialysis and that glycated albumin is a more forceful indicator of glycemic control [18-20] . Further studies are needed to clarify the role of HbA1c in diabetic patients with chronic renal failure.

Our study shows a moderate significant relationship between change in HbA1c and fasting blood glucose concentration values. However, a significant difference in HbA1c is seen with fall in eGFR. In summary, this study showed significantly lower values of Hb A1c among diabetes with CKD. This decrease HbA1c among diabetes with CKD patients is because of carbamylation. carbamylated hemoglobin decreases with increase glucose concentration which can be explained by that glycation of some hemoglobin free amino groups prevents their participation in carbamylation reaction. Therefore, HbA1c should not be used alone for diagnosis of severity of diabetes in patients with ESRD.

P Ravisekar and B Shanthi*