Breast cancer is a complicated and multifactor disease in which so many genetic and environment agents play important roles. Nowadays different ways are available for cancer therapy such as surgery, chemotherapy and radiotherapy that are very costly and have various side effects. Valproic acid is an inhibitor of histone deacetylase enzyme that is effective on apoptosis of some cancerous cells.

Cells were incubated with different concentrations of valproic acid and cisplatin. This incubation lead to cytotoxicity and Geno toxicity and then the viability of cells were measured. Cellular viability as well as Geno toxicity was assessed by MTT assay and micronucleus assay.

This research proves the efficacy of valproic acid on cellular activity of Mcf-7 cell line and BEAS-2B cell line. This effect is probably associated with the ability of valproic acid to inhibit histone deacetylase enzyme and stop cells from growing and specialization and cause death in tumor cells, and the advantage of these drug class is that they have minimum effect on normal cells so they kill them rarely.

Cancer is a complicated disease which can be caused by different reasons. It is caused due to abnormality of cells during development or division. In this disease cells grow and proliferate uncontrollably and they do not respond to cell growth control signals, the accumulation of these cells lead to formation of mass of cancerous cells called tumors. Tumors can be benign or malignant. Benign tumors do not invade other tissues and grow at their origin site but malignant tumors invade nearby tissues and also throughout the body with circulatory system such as blood or lymph, this process called metastasis. Breast cancer is a multifactor disease. It is the second cause of mortality in females. there is some risk factors that may increase the incidence of this cancer such as female sex, genetic mutation specially BRCA 1 and 2, family previous record of breast or ovarian cancer, high Body Mass Index (BMI), late menopause and post menopause hormone therapy. This disease can have different symptoms like changing the size and shape of breast, red or scaly skin on breast and a bloody or clear fluid that comes from nipple. It can be diagnosed by mammography, sonography, biopsy ad MRI. Breast cancer can be treated differently depending on the phase of cancer, in some cases tumor is removed by surgery but in severe cases breast needs to be removed that is called mastectomy. Also chemotherapy and radiotherapy are useful to slow down the rate of cancer [1].

Valproic acid is an anticonvulsant drug that is effective against epilepsy and some type of depression. The mechanism of action of this drug include inhibition of Na+ and Ca2+ channel and increasing GABA levels of brain. Valproic acid works by changing GABA metabolism that works indirectly through GABA transporters. It potentiates non-vesicular release and increase GABA level. It also inhibit the enzymes that metabolize GABA. Researches have shown that histone acetyl transferases and histone deacetylases play a role in tumor development and progression. Valproic acid is a histone deacetylase inhibitor which can reverse the epigenetic changes in cancer cells so it can be used in cancer therapy in addition to noncancer diseases like epilepsy, spinal muscular atrophy and human immunodeficiency virus infection. Mcf-7 cell line is an adherent epithelial, luminal cell line which has estrogen and progesterone receptors, although this cell line referred as hormone dependent but a little amount of steroid hormone in serum is sufficient for cell growth.

Mcf-7 cell line is most common model that is used for breast cancer studies. Its origin was from metastases of an advanced tumor but despite to this the cell line is noninvasive which make the cell line suitable as a model for early stage cancer. This characteristic is because of presence of functional ER and estrogen dependence for growth both in vivo and in vitro studies. BEAS-2B cell line is an immortalized non-cancerous epithelial cell line which is obtained from non-cancerous individuals. It is originated from human bronchial epithelium. This cell line has been used for in vitro studies as a model extensively like cancer studies. Cells were infected with a replication defective adenovirus and cloned. After this procedure squamous differentiation was observed in response to serum. This ability has made this cell line to be a suitable model for monitoring chemical and biological agents influencing differentiation or carcinogenesis. This study aims to examine the toxic effects of valproic acid on both normal and cancerous cells, in this study Mcf-7 cell line is considered as breast cancer cell line and BEAS-2B is considered as human normal bronchial epithelium cell, alongside with causing genetic disorder on peripheral blood lymphocytes as a model to evaluate genetic disorder by MTT and micronucleus assay respectively [2].

Cell culture studies for investigating the effects of valproic acid on cell viability of cancerous and normal cell line using MTT assay. The IC50 method is used to evaluate cytotoxic effect of drug compounds on the cell viability of cancer cells. MTT assay method is one the most common methods in evaluating viability of cells. This assay is based on reduction of MTT a yellow water soluble tetrazolium dye primarily by mitochondrial dehydrogenases to purple colored formazan crystals. The formazan product is dissolved in DMSO and then analyzed spectrophotometrically using ELISA reader device. The dye produced is completely related to activity and viability of cell, the more viable cell, the greater amount of dye produced so the solution (formazan and DMSO) is more purplish. Originally the cells used in this experiment are bought from institute Pasteur and stored in incubation (CO2 5% and O2 95%). In order to counting the cells, we used trypan blue assay as explained by Shokrzadeh et al. (Shokrzadeh, Modanloo, 2017)

Then different doses of valproic acid was prepared (500, 250, 100, 50, 10 mg). Toxic dose of cisplatin and culture media are considered as positive and negative control consequently. For MTT assay inside each microwell of 96 microwell plate 50 micro liter cell culture medium DMEM/F12 which contains 104 cells of breast cancer cell line (mcf-7 cell line) and BEAS-2B cell line as normal cells are added. Then 3 micro wells are assigned for each 5 concentrations of valproic acid. After 24 hrs. incubation, 50 microliters of each concentrations of valproic acid are added into each well separately and for another 72 hours 96 micro wells plate is left aside for incubation. After 72 hrs all wells were washed three times by normal salin and then 50 microliter MTT dye is added to each wells and placed inside an incubator for 4 hours. As the next step when the incubation is done, MTT dye is removed from the wells and 200 microliter DMSO solution is added to each well and located and kept on the shaker for the period of 15 minutes. After 15 minutes shaking, absorption of each well is observed using ELISA READER in 570 nm and 630 nm wavelengths respectively.

For the blood sample needed in this following study the blood is taken from 1 healthy male volunteer in his full consent with respect to obtaining permission from ethic committee of the university with no medical history of any specific disease, and has not been under any treatment with radioactive agents or antibiotics in the past month. 5 ml venous blood sample is collected from a volunteer through using a heparin smeared needle, under sterile condition. In order to preparation of the blood samples, 0.5 cc of blood from each sample (6 groups) is collected in one 6 wells well plate containing 4.5 cc of RPMI1640 culture medium with 20% fetal bovine serum and 100u/ml of penicillin and streptomycin. Then Phytohemagglutinin is given to well in order to stimulate the culture medium. Then the incubation of Cells happens in the incubator for 72 h at 37 °C.it takes 24 hours for valproic acid to be added in different doses(400, 200, 100, 50 µl). Peripheral blood lymphocytes are stimulated and induce mitosis by a mitogen agent such as phytohemagglutinin, which begins 24 hours after its addition. The investigation to this method is the damage to the telophase of mitosis. Addition of cytochalasin B to the culture medium is to be as the means of prevention of cell division completion. Cytochalasin B stops cytokines however it has no effect on the Karyokinesis or nuclear division. Thus, cells which only have undergone one mitotic division post to cytochalasin B addition, happen to give a binuclear cell form. Micronuclei, which imply chromosomal damage, are alike to the nucleus in color and small in size, are found on the outside the main nucleus of the cell along the two nuclei [3].

Letting around 44 hours to pass after culturing, cytochalasin is added and after 72 hours of culturing sample it’s time to perform harvesting. Shortly after kcl is added to samples they are centrifuged for 6 min at 4° at 2500 rpm C. Afterwards softly the supernatant is removed so that about 2 ml of the content of tube is left intact. Following that the sample is again softly mixed by pipette or the duration of 1 minute in order to get the separation of all the lymphocytes. For fixing the cells, we used fixing soloution containing methanol and glycolic acid. After 24 hours for staining the slides, we used 15% Gimsa solution is prepared using phosphate buffer solution. The slides are seen under 40% and 100% magnification. At least 1000 binuclear cells and the number of micronuclei present in them are reviewed for each sample. Results obtained are all reported as mean ± standard deviation attained from three replications of the experiment. SPSS 17 software is used for statistical analysis. Statistical tests including one-way ANOVA test and Tukey test are performed as well. In order to draw graphs, PRISM software is used. In this experiment a P<0.05 were considered as significant. 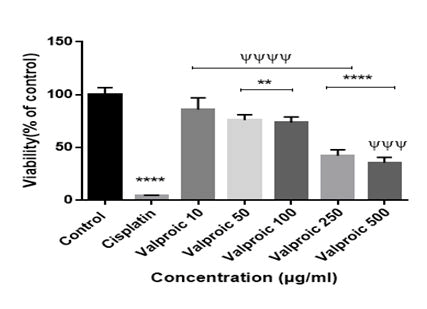 In order to decrease the effects of valproic acid on normal cell line and increase its effect on cancerous cell line we can deliver drug specifically to target cells by putting the drug in nanoparticles or liposomes to deliver them only to cancerous cells and protect normal cells. Another approach to increase efficacy of valproic acid on cancerous cells is to deliver drug only to proteins that are present in cytoplasm or nucleus of cancerous cells so even if drug reach to normal cells it will not exert its effect on that cell because its target is only present in cancerous cells, in other word by doing this approach we deliver drug only to a specified target. As previously mentioned, chronic use of valproic acid lead to production of ROS and oxidative stress so in order to prevent this effect it is suggested to use antioxidants exogenously or increase the power of body antioxidants. These ROS cause genetic damage on peripheral lymphocytes so it is called genotoxic and it is cytotoxic as well. Drugs can be cytotoxic but not genotoxic or they can be both, when a drug cause Geno toxicity it causes genetic disorder on that cell, this mechanism may lead to apoptosis of cell or proliferation of cell so for investigating this issue further research is needed. This article examines pre-clinical data that suggest that VPA can be used as an adjunct therapy in many cell toxicity, hormonal, and immunosuppressive drugs to treat breast cancer. Finally, the current models used to study the function of VPA in breast cancer will be examined alone and with other factors.

At the end of this research, the data obtained from both normal and cancerous cell line were compared together and result showed that valproic acid has effect on viability of both cell lines. By increasing the dose of valproic acid the percentage of viable cells decreases. Therefore, this study proved the effects of valproic acid on breast cancer treatment and its protective effects against histone de acetylation in DNA and apoptosis of tumors.