The Explanation of Students' Addiction Potential Based on Psychological Dysregulation (Behavioral, Cognitive, and Emotional): With Perceived Stress Mediation
All submissions of the EM system will be redirected to Online Manuscript Submission System. Authors are requested to submit articles directly to Online Manuscript Submission System of respective journal.

The Explanation of Students' Addiction Potential Based on Psychological Dysregulation (Behavioral, Cognitive, and Emotional): With Perceived Stress Mediation

Objectives: The present study is conducted aiming to explain students' addiction potential based on psychological dysregulation with the mediation of perceived stress.

Results: Findings showed that there is a significant and positive relationship between perceived stress (r=0.70, p<00.01) and psychological dysregulation (r=0.68, p<0.01) with addiction potential. The suggested model has suitable fitness with the data, and psychological dysregulation with direct effect (β=0.75, p<0.001) and also indirect and medium effect (β=0.18, p<0.01) have explained students' addiction potential.

Conclusions: Considering the results of this research, psychological dysregulation and perceived stress can make the students vulnerable to addiction; and regarding the pathological role of these factors in adolescence period, one can prevent the initiation and development of addiction in subsequent periods and adulthood.

Addiction, as a complex nervous system disorder, emerges in individuals who have particular biological, psychological, and physical vulnerabilities [1]. Unpleasant outcomes of addiction are among the major concerns of communities and the most adverse social harms. They also have drawn the attention of psychological health specialists for a long time [2]. The researches have introduced adolescence as an important period in identification and implementation of effective interventions in addiction. This period is accompanied with behavioral, psychological, and biological changes such as puberty and maturity, shaping of identity and personality, increase in independency and being responsible, development of new social bonds with peers and the opposite sex, and also exploratory behaviour which leads to intense emotional reactions in teenagers, and makes them vulnerable to behavioral problems including violence, substance abuse, unwanted pregnancy, and sexually transmitted diseases [3,4].

Chambers et al. have described adolescence as "a critical period of addiction vulnerability"; since during this period, brain pathways (for instance, neural circuit in anterior prefrontal cortex and the ventral striatum areas), which make the individuals experience motivation and encouragements, are shaping [11]. Neuroanatomical information and operational observations support the hypothesis that neuroanatomical substrate for a large number of motivational effects of addiction to drugs may be a common neural circuit, being a separate entity in basal forebrain known as extended amygdala [11,12]. Extended amygdala not only contains neurotransmitters associated with effects of positive reinforcement of drugs, but it also forms major components of brain stress systems in relation to negative enforcement of dependency [13].

In his study, Koob showed that dysregulation of brain emotional systems is a key component in the pathophysiology of addiction to drugs with the mediation of arousal and stress [13]. Thus, stress is another factor which plays a role in the development and relapse of addiction [14,15], and it is identified as an influential factor in students' addiction to drugs [16,17]. The study of PD in teenagers is useful to understand the types of disorders and risky behavior in this period [18]. Considering the emphasis of empirical studies on brain neuroanatomical changes and also the stress put on the teenagers followed by emergence of various types of dysregulations and behavioral problems in this group, it is necessary to examine these factors in relation to one another. Based on what is presented, the present study is designated and conducted aiming to explain students' addiction potential based on psychological dysregulation with the mediation of perceived stress.

The present study is conducted aiming to explain students' addiction potential based on psychological dysregulation with the mediation of perceived stress.

The present research was conducted via descriptive method. The statistical population included all male students of Jolfa city in academic year 2016-2017. Using cluster sampling method and considering Structural Equation Modelling Method, in which sample size can be measured and determined between 5 to 15 observations per each variable [19], study sample size was determined and selected as 318 individuals of male students in the following course. First, a list of all high schools having second grade for male students in Jolfa was prepared; and then, four high schools were selected randomly and the students were determined. Next, the questionnaires were distributed and fulfilled. The research was conducted by giving some elaborations on the research purpose and anonymity of the participants, and the participants were informed that they are free to exit the process of research anytime they wish.

This scale is developed by Zargar with regard to psychosocial situation of Iranian society which contains 41 items along with 5 lie detector items, and two factors of Passive Potential (9 items) and Active Potential (27 items) [22]. Scoring of each question is on a spectrum ranging from 0 (entirely disagree) to 3 (entirely agree). It is necessary to note that the scoring method is in reverse in questions 12, 15, 21, and 33. To gain the total score of the scale, the scores of all items (except for lie detectors) must be added to each other. The final score will range from 0 to 108. Highest scores are indicative of the participant's greater potential for addiction, and vice versa. Reliability of this scale, using Cronbach’s alpha, is reported 0.90 for the total score, 0.91 for Active Potential to addiction factor, and 0.75 for Passive Potential to addiction factor [22]. In the present research, Cronbach’s alpha coefficient for the entire scale was gained 0.86.

This scale, having 14 items, is designed by Cohen et al. to measure the extent to which a situation is assessed as stressful. Each item is scored based on a 5-point Likert scale (0 to 4, Never to Very Often); and half of the items are scored directly, and the other half are in reverse. These questions are designed in a way that participants express their opinion about the uncontrollability, unpredictability, and toughness of stress in the last month of their lives [23]. Cohen et al. has reported Cronbach’s alpha coefficient for the reliability of the scale in three test groups (two groups of university students and one incongruous group) from 0.84 to 0.86. In the present study Cronbach’s alpha coefficient for the entire scale is gained 0.85 [23].

Performing all statistical analyses was scheduled by using the SPSS software version 22 and AMOS software version 20, and by using descriptive statistics, the Pearson correlation and the structural equation modeling were analyzed. Maximum Likelihood Estimation was used for the assessment of the model; and in order to examine the fit of the model, Chi-square (χ2) indexes, Chisquare/ Degrees of Freedom (χ2/df) index, Goodness of Fit Index (GFI), Adjusted Goodness of Fit Index (AGFI), Comparative Fit Index (CFI), and Root Mean Square Error of Approximation (RMSEA) were utilised. Also, Bootstrap was used to determine the significance of intermediary relationships.

The Correlation matrix of Table 1 depicts reveals that addiction potential has a significant positive association with perceived stress (r=0.70, p<0.001) and psychological dysregulation (r=0.68, p<0.001). In order to check the structural coefficients, fit of the original model was examined.

Table 2: Fitting indexes of the model presented in the research

Figure 1 illustrates the structural pattern, pathways, and their standard coefficients in the research model. In this research, all relations of the psychological dysregulation aspects and perceived stress with addiction potential in students are significant. 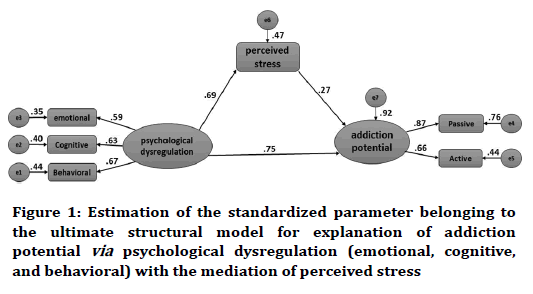 Figure 1. Estimation of the standardized parameter belonging to the ultimate structural model for explanation of addiction potential via psychological dysregulation (emotional, cognitive, and behavioral) with the mediation of perceived stress

Substance use and abuse in students is a serious health risk which is accompanied by increase in violence, Delinquency, and suicidal behaviors, and demands precise heed to its causes and influential factors [23-26]. Regarding the fact that studies have described adolescence as a period vulnerable to risky behavior with neurobiological tendencies and readiness [27], and also considering the experience of high levels of stress and PD in students [5,17], addiction potential is likely in this group. In this regard, the present research, with reference to PD research history, is devoted to students' addiction potential based on psychological dysregulation (behavioral, cognitive, and emotional) with the mediation of perceived stress.

Psychological dysregulation has a multi-dimensional concept in which teenagers in encounter and confrontation with life events: A) Use weak cognitive strategies like thought suppression, rumination, and catastrophizing (Cognitive dysregulation) [30,31]; B) Interact with abhorrent behavior such as self-harming behavior, suicide, and substance abuse (Behavioral dysregulation) [32]; and, C) Practice recurrent and extreme experience of emotions which leads to disorders such as depression, anxiety, suicidal ideation, eating disorders, and substance and alcohol abuse (emotional dysregulation) [33].

Perceived stress is defined as body's reaction to a change which demands adaptability or physical, mental, or emotional response. Also, perceived stress is a psychological state or process during which the individual perceives his or her physical or psychological health as threatening. Actually, development of stress is dependent on the way an individual comprehends and discerns a situation; it is possible that a situation is perceived as benign for an individual and as a threat for another one [23]. Adolescence is a period characterized by significant growth changes in various biological, cognitive, emotional, and psychological aspects. In addition to stress which is innately associated with the growth period of teenagers, external stressful factors (for example family conflicts, health problems, and financial issues) also play prominent roles during this period. There is a mutual relationship between stress and initiation, progress, and intensification of different risky behavior like alcohol and drug abuse [16]. Actually, stress is identified as a significant risk factor in the development of addiction and behavior associated with health problems [15].

Generally, the results of this research are in line with the theoretical and empirical history of the discourse under study, and have provided sufficient evidence to confirm this model for interaction of psychological dysregulation and perceived stress in the explanation of students' addiction potential. In practice, it is possible to rely on these evidences; and aiming at dysregulation problems and different types of stresses in adolescence period, adopt necessary action for more effective prevention. Among the limitations of this research one can note the study population. Sampling was conducted only among second grade high school students of Jolfa city; and considering the differences and cultural variety of Iranian society, one must be careful with generalizing it to all teenagers and students. Since a number of psychological factors (including some problems and inefficiencies in emotional, cognitive, and behavioral regulations) and intrapersonal and interpersonal stresses play determinative roles in the majority of teenagers' behavioral problems and disorders, it is suggested to discuss these variables using longitudinal studies and in larger samples; so that one can obtain more comprehensive information about the roles of these factors in teenagers' addiction potential beside precise control of biological, psychological, and social factors.

The researchers find it necessary to sincerely thank all the students who devoted their precious time on completion of this research's questionnaires.