The Impact of Selected Fluoride Materials and Nd: YAG LASER on Dentine (In Vitro Study)

Background: Topical fluoride use result in re harden or arrest lesions of dental caries in dentine. Silver diamine fluoride (SDF) can be employed to inhibit and arrest dental caries. The use of laser in caries prevention was suggested by used Neodymium doped yttrium-aluminium-garnet (Nd: YAG) laser as an adjunct to conventional caries prevention therapies.

Aim: The aim of this research was to investigate the effect of selected topical fluoride materials, acidulated phosphate fluoride (APF), Silver diamine fluoride (SDF), Stannous fluoride (SnF2) with or without Nd-YAG laser application on Fluoride uptake of dentine, in vitro.

Materials and methods: The samples in this study include 55 maxillary first premolar teeth, distributed into 11 groups, and each group involved of five specimens. Before the surface treatments, all the specimens in the 11 groups underwent a pH cycling procedure to induced caries like lesion in dentine specimen for five days, and then 2 days in remineralization solutions. Fluoride measurements were accomplished by an ion-selective electrode.

Results: Results presented after treatment with different agents, a marked increase in fluoride uptake for the groups treated with SDF+Laser, SnF2, Laser+SnF2, Laser+APF. While a severe increase in fluoride uptake for the group treated with silver diamine fluoride (SDF) alone. Conclusion: Treatment of dentine surface with Silver diamine fluoride alone gave the best result regarding as topical fluoride application.

Dental caries refers to the localized chemical termination of dental hard tissue that result from acidic by products of dental plaque’s (biofilm) metabolic processes that cover an affected tooth surface [1]. Changes occur in both enamel and dentin but the progression of caries is not the same. In enamel, dissolution occur in highly mineralised tissue as a result of bacterial acid [2], whereas that in dentine includes both demineralization of mineral and organic matrix dissolution of the type I collagen fiber system [3]. Earlier, the damage of the dentine organic matrix was measured to be mostly occurring because of the bacterial collagenases action, whereas some researches have shown that collagen is likely to be ruined by matrix metalloproteinases [4], they are triggered by low pH within the carious dentine [5].

Fluoride are chief assistant in the prevention of dental caries, however it takings time for depositioning as it requires about 3ppm change the balance from net demineralization into net re-mineralization [6]. The higher intake of fluoride in the period of tooth development increases the amount of fluoride in enamel, thus, raising the amount of acid resistance and this formed the hypothesis. Due to this, synthetic fluoridation of water for drinking turned to be the best solution and there was need to take fluoride systemically [7]. Majority of the fluoridation systems offer less concentrations of fluoride ions in saliva, therefore, the plaque fluid experiences a topical impact. Fluoride stops the caries mostly through enamel remineralization resulting in fluorapatite formation. The ions of fluoride minimize demineralization of tooth enamel, and raise the remineralization rate of cavities in the initial stages [8].

Topical fluorides are delivered to teeth at exposed surfaces, at high amounts for a local defensive impact to make the teeth extra resistant to caries. Topical fluorides are applied to the teeth directly and are most effective when delivered at very low doses several times a day [9]. The fluoride compound formed for topical application in the dental department in 1950s included SnF2 (stannous fluoride), the reaction between enamel and stannous fluoride is exceptional in the manner that all the reactants anion (fluoride) and cation (stannous) chemically act in response with enamel constituents [10]. Acidulated phosphate fluoride (APF) was brought in 1960s inform of a gel and solution. Skilfully used acidulated phosphate fluoride comprises of 12,300 ppm fluoride (1.23% fluoride) as sodium fluoride at pH 3. The solution was created according to the researches premeditated to hasten formation of enamel fluorapatite, reduce the formation of calcium fluoride, raise fluoride surface absorption, and demineralization prevention [11]. Silver diamine fluoride is not just a meek salt of ammonium, fluoride, and silver ions, but it a varied thick-metal halide multifaceted combination. Ammonia has the ability to maintain the solution at a frequent concentration in a long period [12]. Therefore, the joint impact of fluorides and silver has been theorized to possess the potential to combat caries development and avert emergent of fresh caries instantaneously [13].

Laser irradiation can be spread, absorbed, diffused or reflected into dental tissues Depending on tissue features and laser wavelength [14]. The neodymium yttriumaluminum- garnet (Nd:YAG) laser is a solid-state apparatus that produce light in the near infrared region of the spectrum at 1064 nm. Lasing has an antibacterial action on enamel and dentine through the vaporization of cariogenic bacteria both on the surface and in the subsurface configuration [15]. Studies in-vitro shown that Nd:YAG radiation of a dentine or enamel surface decreases its permeability [16]. As far as there was no Iraqi study directed to explore the impact of silver diamine fluoride with or without Nd-YAG laser, this study was conducted.

The samples in this study comprised of 55 maxillary first premolar teeth. Samples were erratically distributed into 11 groups, and each group involved of five specimens for fluoride uptake test. Teeth had been distributed into groups consistent with the type of treatment: 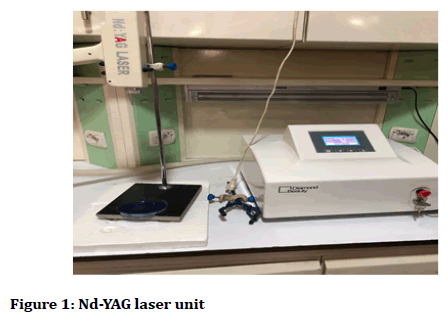 The buccal surface of the crowns was selected for this experiment. The tooth was sliced by a high speed turbine hand piece with flow of de-ionized water to form square slabs (the enamel window technique) which described by Grenby et al. [17], at the center of the image line extending to the cement-enamel-junction (CEJ) from the uppermost cusp, the primary cut was completed mesiodistally via the tip of the buccal cusp in order to access the buccal surface dissection whereas holding the root and there was removal of coronal dentine alongside carbide round burs slowly using a light with the used of magnifying eyeglass. Serving of the sample was at about a mid-third of the buccal surface as seen in (Figure 2). Then on buccal side was cautiously cut off to expose a flat dentine surface. 2.5 by 2.5 mm window in surface in the tooth block (Figure 3). Tooth block surface were coated by acid resilient nail paint, except the dentine window. The tooth blocks were labeled individually on one of the painted flat surface. 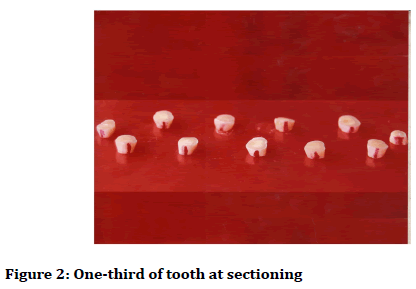 Figure 2. One-third of tooth at sectioning 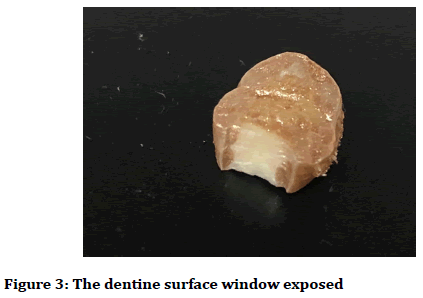 After each dentine specimen treatment, it was etched with 10 μl of 2M HCl for 10 second. The liquid was then collected using of paper points, subsequently transferred to 5 ml water solution and TISAB III 0.5 ml (0.4% EDTA and 1.0 M acetate buffer 1 M NaCL, pH 5.0) that necessary to immerging fluoride electrode adequately [21].

Fluoride quantities were carried out through the application of an ion-selective electrode (WTW) GmbH (Germany) combination of fluoride electrode F 800 and F 500 (Figure 4), to establish the concentration of fluoride ions within dentine sections by the potential in standard solutions’ millivolt (mV) were openly estimated using the electrode then calibrated with the application of a concentration scale or through plotting calibration graph and created on a semi-logarithmic standard paper through drawing long axis (concentration) versus linear axis (the millivolt interpretations). 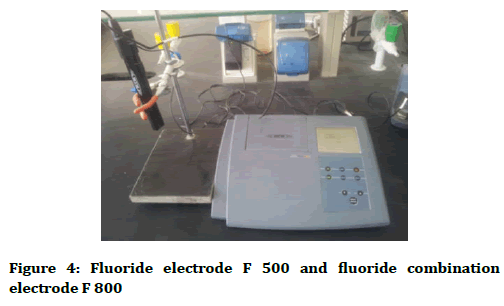 Description, analysis and presentation of data were carried out with the application of SPSS (Statistical Package for Social Science) version 21. The statistical analyses may be grouped into 2 classes:

• Levene test: It analyses the homogeneity of variance among groups. 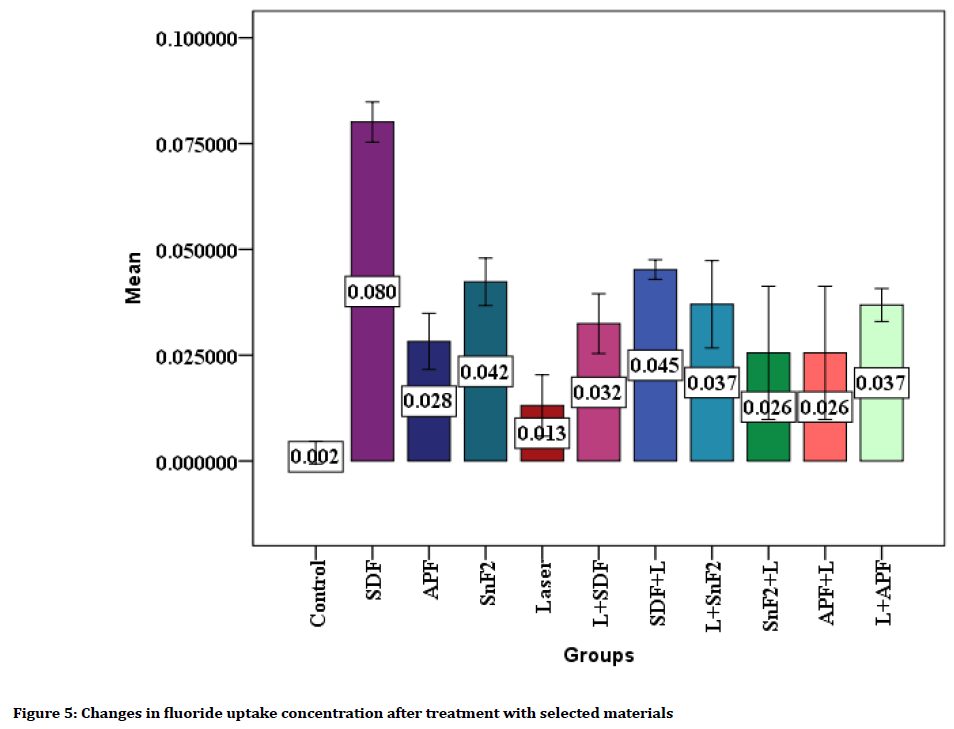 Multiple comparisons of fluoride uptake for all groups could be seen in Table 2, it was found a statistically highly significant difference in fluoride uptake for the control group when compared with group treated with SDF, APF, SnF2, Laser+SDF, SDF+Laser, Laser+SnF2, Laser+APF (p<0.01). Non-significant differences were shown among control group and (Laser, SnF2+Laser, APF+Laser) groups (p>0.05).

Table 2: Multiple comparisons of Fluoride uptake of dentine surfaces for selected materials for all groups by using Dunnett T3 test

Result showed that there was a marked rise in uptake of fluoride by dentine after treatment stage with selected topical fluoride material alone or with laser as compared to fluoride concentration of control teeth for all groups. After treatment with selected material, a marked increase in fluoride uptake for the groups treated with APF, SnF2, Laser+SDF, SDF+Laser, Laser+SnF2, Laser+APF. While a sharp increase in fluoride uptake for the group treated with silver diamine fluoride (SDF) alone.

After applying silver diamine fluoride on a caries surface, the squamous layer of silver-protein combines emerges, raising the enzymatic digestion and acid dissolution resistance [24]. The consequences of indicated laboratory researches usually approve that silver diamine fluoride concentration of 38 percent is very operative when it comes to preventing collagenase action and deterrence collagen destruction as compared to less concentration [5,25]. Fluoride and Silver ions infiltrate ~25 microns to enamel, and 50-200 microns to dentin. Silver diamine fluoride arrested lesions are 150 microns in thickness [26].

The great level of fluoride taken up by enamel and dentine treated with APF gel may describe its higher ability in decreasing equally caries and erosion when associated to NaF gel [27].

The process for the defensive influence of SnF2 alongside erosion can be described by the obstructive diffusion movement [28]. The dentinal superficial is protected by a film having the reactive produces of SnF2 and hydroxyapatite, as salts of Sn2OHPO4, Ca (SnF3)2, Sn3F3PO4, or CaF2, that can eliminate obvious dentinal tubules. On the other hand, in compare to previous studies, [29,30] SnF2 unaccompanied was incapable to decrease the demineralization and loss of mineral from dentine.

The Nd:YAG laser radiation reduced the quantity of carbonate of dentin when related to the phosphate quantity, representing the happening of carbonate damage because of laser radiation. The carbonate radical can standby the hydroxyl or phosphate radicals in the natural apatite crystal, creating a fewer constant and less solvable stage [31]. On the other hand, opposing consequences are also detected, since it was informed that this wavelength of laser cannot suggestion any extra assistance when related to fluoride inaction alone [32] that is in agreement with present study of laser group statistically non-significant difference in fluoride uptake values with control group.

A study showed that low-energy sub-ablative Nd:YAG laser radiation subsequent SDF usage, enlarged fluoride installation and altered hydroxyapatite to fluoridated hydroxyapatite [33], the description is that once SDF can source the stain of demineralized dentine (the result is not important on intact dentine), improving the engagement the energy of Nd:YAG laser as the Nd:YAG laser are called pigment dependence laser that mostly cooperate with stained tissues as melanin, and are merely a little absorbed by water [34].

For the group treated with SnF2 or APF followed by laser, the mean values of fluoride uptake have revealed non-significant difference as compared with control group, approved with the authors described that this would show laser action has no result on the hypersensitivity of the tooth and demineralization of the dentine as SnF2 or APF disguised the laser effect such as a topical fluoride use before it [35,36].

For the groups treated with Nd:YAG laser then one of these materials (APF, SDF, SnF2) result shown that the mean values of fluoride uptake increased, this may be recognized to the fact that laser parameters in the present study were used, they were enough to encourage the melting and recrystallized to greater apatite crystals comprising fewer carbonate during laser radiation of the dentin surface, moreover, they were revealed to be harmless for pulp liveliness [32,37,38].