Introduction: This study was conducted to investigate the relationship between spiritual well-being and family cohesion among people with thalassemia Major.

Conclusion: In this study it was observed that a significant direct correlation exists between spiritual well-being and family cohesion. The role of the family as the main supportive institution against the challenges of life is undeniable. Hence, by increasing the level of spiritual well-being of the patients some steps can be taken to promote the cohesion of patients’ families in order to decrease their spiritual and physical problems.

Thalassemia is a chronic disease [1], caused by the lack or deficiency of one or more polypeptide chains of hemoglobin, which is transmitted generation to generation [2]. The most severe form of this hematological disorder is beta thalassemia major [3,4]. The World Health Organization (WHO), introduced thalassemia as the most common chronic genetic disorder in 60 countries [2] that Iran is at of the high risk areas for the disease [3]. So that, according to the World Health Organization, 4 percent of the population of country is carriers of thalassemia and the number of patients with beta thalassemia major in Iran in 2013 were estimated more than 30 thousand people, while in a populated country like America it is less than 1000. Also, annually approximately 800 people are added to the population of patients with thalassemia [5].

Several reports worldwide indicate that life expectancy in patients with thalassemia is increased considerably and mortality rates significantly decreased with the help of available treatments [6-8]. However, social and psychological problems affect the quality of life in patients and their caregivers [8], more than 80% of people with Thalassemia Major (BTM) suffer from mental disorders [1,9], which produces a wide range of serious clinical and psychiatric challenges for patients and their families [10]. Among the complications caused by the disease that affects patients’ life include changes in bone, short stature, mental retardation [11,12], enlarged liver and spleen, heart failure [13-15], lack of physical growth and fertility [6] and premature death; that not only their physical performance is affected [11], but these can also affect their emotional and social performance [3].

Mental fatigue, well-being and educational performance issues [16], difficulties in playing social roles in society, the inability to raise a family [6], decreased self-esteem, reduced academic achievement [17], weak performance and ultimately low quality of life are the other problems caused by this disease [18]. In these patients, in addition to increased levels of stress [17] including physical and emotional stress, a significant financial stress also affects their families [19]. The patients suffering from BTM are faced to many challenges in which the role of families in providing different types of social support is of considerable importance [20]. This disease can make too much psychological burden for patients and their families [11,21]. Emotional distress, anxiety, fear, problems in dealing with the feelings of patients and its subsequent effects on the normal functioning of the family, are the common problems in families with thalassemia children [9,22].

Having a child with this disease may disrupt family dynamics and cohesion [23] Therefore, psychological support aimed at reducing emotional distress by parents, and strengthened coping strategies for everyday life’s cohesion is required [24]. According to surveys, patients who received more social support from family and other people have had less depression [25,26]. Spiritual wellbeing is an important aspect of human health that the integrated relationship between internal forces and is determined by features like stability in life, peace, balance and harmony and a sense of connection and intimacy with God [27].

As a humanistic dimension of the individual, spirituality has an effective role in improvement and meeting the spiritual needs of patients and their families. Thus, it has gained increasing attention as an essential element of clinical care [28]. In case of disease, spiritual matters make a person to seek meaning and purpose of life, followed by increased spiritual needs [29]. Spiritual wellbeing is the core of human health, and fostering and promoting spiritual well-being can be a way of coping with the disease [30]. Research shows that religious beliefs may affect the overall health or coping with a disease [31,32]. Research conducted by Aydinok et al., showed that family awareness and psychological support leads to better compatibility of patients and reduces depression, obsession and paranoia [33]. Also, according to Kwong et al., the family functioning and social support can have many impacts on emergence of mental disorders or mental health of thalassemia patients [34].

Strengthening the spiritual dimension on the one hand reduces the symptoms of the disease and on the other increases a person's ability to adapt, it also improves mental health and helps to reduce feelings of hopelessness and depression and improves social performance [35]. Mcnulty et al. in a study among patients with multiple sclerosis (MS) found that spiritual beliefs and faith were helpful in coping with the disease [36]. Adegbola’s study showed that the spiritual wellbeing of patients with sickle cell anemia is directly related to their quality of life [37].

Considering the effects of spirituality and dynamism and cohesion of the family in improving the symptoms, and due to the limited research done in this area, the present study was conducted to investigate the relationship between spiritual well-being and family cohesion in patients with thalassemia major in Dezful in 2015.

This study is a descriptive analytical study that was conducted after obtaining the relevant permissions from ethics committee of Dezful University of Medical Sciences (DUMS-121) and the informed consent of patients with thalassemia referred to thalassemia major ward of Large Hospital of Dezful. Attainable sampling on eligible patients was used to select the participants. Overall, 125 patients referred to the center that 101 people participated with satisfaction in this study. Inclusion criteria included: patient satisfaction to participate, full awareness about the aims of the project, being literate, and having at least one record of hospitalization. And the exclusion criterion was incomplete questionnaire. Data collection tools included demographic questionnaire, Daaleman and Ferry Spiritual Index of Well-being (SIWB) [38] and Moos Family Cohesion Scale [39].

Demographic questionnaire included age, sex, body mass index, ethnicity, education level, occupation, marital status, monthly income, hospitalization record, and medication usage. SIWB scale is developed by Daaleman et al. [38] to measure the spiritual well-being and is the most famous spiritual well-being assessment scale and contains 12 questions that are designed based on Likert scale of five options. Total scores range from 12 to 60, the higher scores indicate higher spiritual well-being. It consists of two subscales of "self-efficacy" and "life scheme". Each subscale consists of 6 questions. A minimum of 12 and maximum of 60 points are possible that scores between 12 and 24 indicate low spiritual well-being of individuals, and scores between 24 and 36 represent average spiritual well-being and scores more than 36 show high spiritual well-being. In the initial measurement, Cronbach's alpha for the total scale, selfefficacy subscale and life scheme were 0.91, 0.86, and 0.89, respectively [38]. Family Cohesion Scale by Moos et al. [39] includes 9 questions. The range of scores are on two scales of completely true (0) and completely false (1). Reverse items of the questionnaire include items 1, 3, 4, 6, 8 and 9. The points are summed to calculate the total scores of people. The higher score indicates higher cohesion and coherence in a family environment. The minimum possible score was 0 and the maximum was 9 where the scores between 0 and 3 represent lower family cohesion, scores between 3 and 5 show average family cohesion, and score higher than 5 shows good family cohesion.

In terms of correlation reliability, the researcher obtained the reliability of this questionnaire as 0.86 using testretest and 0.78 through internal consistency [40]. To analyze the data SPSS software version 18 and independent t-tests, ANOVA, Pearson correlation and linear regression were used.

The sample included 101 patients with beta thalassemia major with an average age of 5.4 ± 23.22 years. Among these, 60.4% were male and the rest were female; and 82.2% were single, and the rest were married. Table 1 shows the demographics of the sample.

*Significance level was considered under 0.05

Table 1 also shows that none of the demographic variables has a statistically significant relationship with spiritual well-being as well as family cohesion (p>0.05). 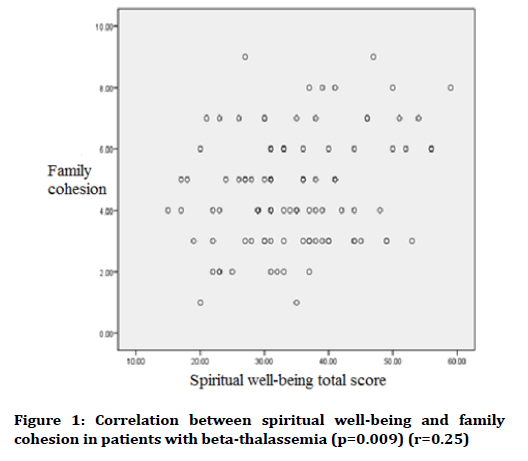 In this research, family cohesion has been at an average level. Children with thalassemia compared to healthy children have lower quality of life in all aspects that affect the family cohesion [16]. Other studies also support the low quality of life of these children that is the result of factors such as family income, family education regarding the view toward the thalassemic patients that improve patient’s performance [9].

The major limitation of this study was to collect data at one period of time, excluding the illiterate and the limited number of previous studies on patients with thalassemia major. To further explore the relationship between spiritual well-being and the family cohesion it is recommended that more studies are done in this area.