To Assess the Changes in the Blood Glycemic Level among Diabetic Patients before and after Administration of Local Anesthesia Containing Adrenaline 1:80,000 for Dental Extraction in OMFS Department MGSDC Sri Ganganagar
All submissions of the EM system will be redirected to Online Manuscript Submission System. Authors are requested to submit articles directly to Online Manuscript Submission System of respective journal.

To Assess the Changes in the Blood Glycemic Level among Diabetic Patients before and after Administration of Local Anesthesia Containing Adrenaline 1:80,000 for Dental Extraction in OMFS Department MGSDC Sri Ganganagar

In present scenario diabetes have appeared as common disease with prolonged dependence on state of body and inter related risks that make its management more difficult and requires more interdisciplinary approach. Glucose levels in diabetic patients have shown considerable variation with adrenaline used in local anesthesia. The aim of this research was to assess the varying levels of glycemic levels in patients with diabetic disorder before and after injecting them with local anesthesia containing adrenaline prior and after extraction of tooth.

Use of lidocaine in minor oral surgical procedures has been of immense help and its effectiveness has been varying depending upon number of factors. Addition of adrenaline shows an increase in its efficacy in controlling bleeding hence provide blood less field of surgery, also increase its anaesthetic action and absorption level [1-3].

In this study 50 diabetic patients were selected randomly from OPD of OMFS department MGSDC Sriganganagar. After an informed consent, procedure was duly explained to the patient and demographic details including age, gender and patient past medical history whether nondiabetic or diabetic was also recorded (Table 1).

The inclusion criteria followed in study was if patient had known history of diabetes and whether he/she was on medications for diabetes, and if diabetic, whether medication is taken or not on the day of extraction. This inclusion criterion was strictly followed for all the patients in our study.

Exclusion criteria taken were to rule out any other medical problem except diabetes in all patients under study.

Further the procedure that was followed to measure glycemic level in our patients was by using Acucheck glucometer as per the instructions laid down by manufacturer. During procedure a gentle prick was given on tip of patients finger and sample of blood under sterile conditions was taken and placed it over the strip, and accordingly the blood glycemic level before the administration of local anesthesia containing adrenaline (1:80,000) was recorded as marked in Table 1, then next reading was taken after 3 min–5 min of administration of local anesthesia. Last reading was measured after 5 min of the complete procedure to assess the glycemic levels after extraction of the tooth.

Table 2: Mean sugar level in diabetic patients with and without hypoglycemic medications 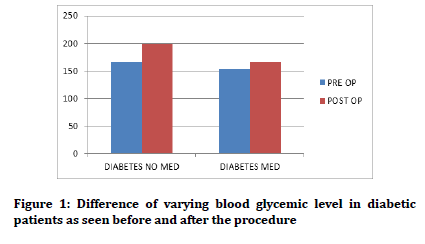 Figure 1: Difference of varying blood glycemic level in diabetic patients as seen before and after the procedure

Table 3: Mean sugar level before and after injecting lidocaine with adrenaline (LA) in diabetic patients with and without hypoglycemic medications 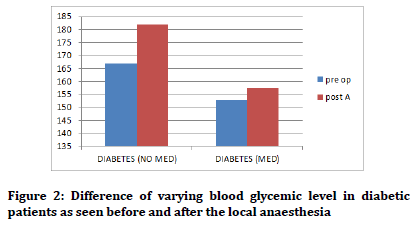 Figure 2: Difference of varying blood glycemic level in diabetic patients as seen before and after the local anaesthesia

Very few studies are available on effect on local anesthesia on metabolic and cellular functioning of the human body [5,6]. According to a recent research, acute short-term hyperglycemia has shown to change immunity and alter host response to infection [7].

Further it’s seen that lowering of nitric oxide formation in endothelium further decrease the tissue reaction to dilating agents like Bradykinin and in this way it hampers function of component system even though complement factors have shown increase in levels [7,8].

Acute hyperglycemia pricks up hyperinsulinemia (which increases the circulating cytokine concentrations) and these effects are more pronounced in sepsis with impaired glucose tolerance. This suggests a potential modulation of immunoinflammatory responses in human sepsis by hyperglycemia [9]. On the other hand, in the healthy patients, literature suggests that there is a rise in blood glucose levels, but this increase in glucose is slight compared to the increase in diabetes [10-13].

The results of this study concluded that patients suffering from diabetic disorder who had their hypoglycemic medication taken regularly, no significant (p>0.05), change in glycemic levels was seen after administration of LA as well as after extraction of their tooth. However, the only significant (p<0.05) change in glycemic level was seen in diabetic patients who had not taken their hypoglycemic medication prior to tooth extractions.

A study done by Meechan [1] on whether addition of adrenaline in local anesthesia cause any variation in blood glucose levels in group which was not undergoing any stress compared with a group which was undergoing third molar surgery (supposedly stressed) showed that the results observed in both were similar: A significant increase in blood glucose levels. Thus, although endogenous adrenaline would inevitably be released due to stress (and may be playing a role in varying the glycemic levels), the effect of the exogenous epinephrine is undoubtedly, very significant.

Even though Meechan observed significant alterations in glycemic levels after 20 min of adrenaline administration, they did not mention anything about the anti-diabetic therapy status of the patients included in their study [14].

It could be concluded from the study that adrenaline in local anesthesia doesn’t have any considerable effect on glycemic levels of diabetics on medication; however it causes significant increase in glycemic levels in diabetics who didn’t take medication. Thus it is imperative to take detailed history and seek consult of physicians in diabetic patients before undergoing dental surgical procedures.