Introduction: Intertrochanteric fractures of femur are one of the commonest musculoskeletal injuries in patients of above sixty years age group because of trivial fall and osteoporotic nature of bones. Different studies have been showing controversial results between Dynamic Hip Screw & intramedullary fixation devices historically. Aim: Aim of our study is to compare functional and clinical outcome of dynamic hip screw (DHS) and intramedullary proximal femoral nail (PFN) in intertrochanteric femur fractures. Material & Methods: Our study included (n=50) patients with intertrochanteric fracture of femur from which (n=25)50% patients operated with DHS and other (n= 25)50% patients operated with PFN. In our study average age of patient was 63years. Most common mode of injury was trivial fall and 54% patients were female. There were (n= 28)56% stable & (n= 22) 44% unstable fractures out of 50 intertrochanteric fractures. Results: Mean duration of surgery, blood loss during surgery and length of incision were less in PFN group than DHS group. Fluoroscopy time is higher in PFN group than DHS group. Postoperative shortening was more in DHS group and postoperative range of motion was better in PFN group. Union time is faster in PFN group. Malunion was seen in (n=5) 20% patients of DHS group while there were (n=2)8% cases of malunion in the PFN group. Wound infection was seen in (n=3) 12% patients in the DHS group and in (n=1)4% patient in the PFN group. Conclusion: At the end of the study we came with the conclusion that in stable intertrochanteric fracture DHS & PFN had similar results but in case of unstable fracture PFN was significantly better in terms of functional and clinical outcomes.

DHS (Dynamic hip screw) is extramedullary load sharing device and long procedure and it has gained widespread acceptance in these types of fractures [5-9]. However intramedullary implants have a biomechanical advantage10 of smaller distance between weight bearing axis and the implants.

AO/ASIF introduce PFN (Proximal femoral nail) in 1996 and it became more popular implant for intertrochantric fracture because it has biomechanical advantages like being load bearing device, shorter lever arm, being axial, greater implant length. Addition of anti-rotation hip screw proximal to main lag screw given which is significant advantage over DHS. Although mechanical failures are also seen with PFN [10-12] and PFN is also little bit costlier than DHS, still there are many benefits with PFN over DHS.

Our study was done in (N=50) patients of intertrochantric fracture at Gujarat Adani institute of Medical Sciences, Bhuj, Gujarat from October 2018 to October 2020.All the patients operated by senior orthopaedic surgeon. Informed and written consent have been taken of all patients to be included in the study. This study was approved by Institutional Ethics Committee. Ethical committee Approval letter No: GAIMS/IEC/ APPROVAL/40/2018. Inclusion criteria: Skeletally mature patients (age >18), only closed fracture, time <2 weeks. Exclusion criteria: Skeletally immature patients, compound fracture, pathological fracture, any other associated injury or fracture.

All patients with intertrochantric fracture were hemodynamically stabilized. X ray pelvis with both hip anteroposterior view and full femur anteroposterior view and lateral view were taken. All routine workup for surgery was done. Traction was applied to patients till surgery. All surgery was done over traction table under image intensifier guidance.

Decision for type of operation was based on surgeon’s choice. All patients had similar antibiotic coverage post operatively. Suture removal was done between 12 to 17 days. All patients were followed up weekly till 1 month and then every monthly till 6 months and every 3 months till 12 months.

Assessment of patients and comparison were done in terms of duration of surgery, total amount of blood loss, time of union, early and late complications, timing of early mobilization and full weight bearing. Clinical and radiological assessment was done at end of 12 months using Harris hip score.

Our study consists of 50 patients from which 62% patients were aged more than 60 and 38% aged below 60 years. In our study 54% were female and 46% were male. Most common mode of injury was trivial fall in 76 % cases; other 24% cases result from high velocity trauma.

At the end of 6 months based on Harris hip score excellent to good results were seen in 88% of patient in PFN group and 60% of patients in DHS group (p= 0.012). 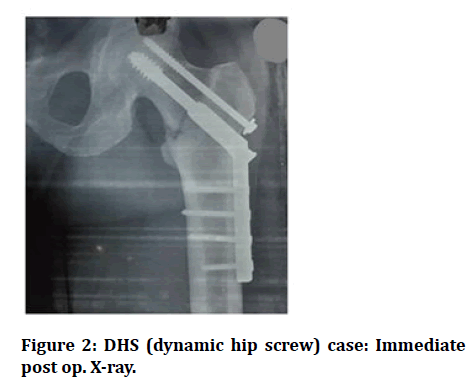 Mean duration of surgery for DHS group was 85.2 min which was significantly higher than mean duration of surgery for PFN group (67.2 min) Baumgaertner et al. [16] also found that the surgical times were 10 per cent higher in the DHS group in their series. but the fluoroscopy timing was opposite in both groups, in case of DHS it was 56.4 minutes and in case of PFN it was 67.2 minutes which was longer than DHS.

Mean length of incision in patients of DHS group and PFN groups were found to be 15.67 cm and 7.96 cm respectively with p =0.0001. Due to longer incision and duration of surgery blood loss was higher in DHS group with average of 406 ml and lower in PFN group with an average of 126 ml which shows significant less blood loss in PFN group. This was comparable to the study conducted by Baumgaertner et al [16].

In our study, complications like Wound infection in 3 patients of DHS group was higher than PFN group due to longer operation time and longer incision. In PFN only 1 patient got wound infection and which was superficial infection only. Saudan et al. [17] also did not find any significant difference between the infection rates in the two groups in their series. screw cut-out occurs in 2 patients of DHS group while only in 1 patient of PFN group screw backout occurs. There was no implant cut out in the PFN group which was similar to the series by Menezes et al. [18].

This study is dedicated to all my patients, teachers & surgical team members.