To Compare the Efficacy of Dexamethasone Versus Ketorolac with Ropivacaine for Nerve Stimulator Guided Infraclavicular Brachial Plexus Block: A Prospective Randomised Comparative Study
All submissions of the EM system will be redirected to Online Manuscript Submission System. Authors are requested to submit articles directly to Online Manuscript Submission System of respective journal.

To Compare the Efficacy of Dexamethasone Versus Ketorolac with Ropivacaine for Nerve Stimulator Guided Infraclavicular Brachial Plexus Block: A Prospective Randomised Comparative Study

Infraclavicular Brachial plexus block is an advanced regional anaesthetic technique well suited for distal arm and fore arm surgeries [1]. Several techniques for infraclavicular blocks have been described. The coracoid approach was first described by Kurt Whiffler in 1981 [2]. Though coracoid approach has been popular, now-a-days approaches around the mid clavicle has come into vogue because of success rate with single injection technique with nerve – stimulator guidance through precision and expertise is required [3,4]. The nerves that are blocked muscle cutaneous nerve, radial nerve, median nerve, and ulnar nerve [5]. Local anaesthetic Ropivacaine is being widely used for regional blocks because of its safety and availability [6]. Ropivacaine acts by causing reversible inhibition of sodium influx thus blocking conduction of impulses in nerve fibres. Various adjuvants like fentanyl, dexamethasone, dexmedetomidine, clonidine, ketorolac, magnesium sulphate etc. were added to local anaesthetics to improve the speed of onset, quality and duration of block [7,8]. Ketorolac is parenteral NSAID which produces anti-nociception by inhibition of prostaglandin synthesis. Dexamethasone produces antinociception by decreasing the release of inflammatory mediators, inhibiting potassium channel regulated discharge of C-fibres and also by reducing ectopic neuronal discharge.

The aim of the study is to determine the efficiency of Ropivacaine with Ketorolac for infraclavicular Brachial plexus block for hand and fore arm surgeries.

After approval from institutional ethics committee and written and informed consent from patients and their attendants, 50 ASA grade I and II patients, aged between 18–58 years. belonging to both sexes were randomly selected for this single centred, randomised parallel design and comparative study. They were allocated into two groups equally of D and K using computer generated random numbers as following.

• History of allergy to study drugs

• History of contraindication to steroids

Single injection infraclavicular Brachial plexus block is preferred using 21 G 100 mm insulated needle under the guidance of peripheral nerve stimulator. The patients were placed in supine position with the head facing away from the side to be blocked. The patient’s arm was abducted and flexed at elbow to keep the relationship of land marks to the brachial plexus constant. The coracoid process was identified by palpating the bony prominence just medial to the shoulder while the arm is elevated and lowered. As the arm is lowered the coracoid process meets the fingers of the palpating hand. Medical clavicular head is another land mark. Midpoint of the line connecting coracoid process and medial clavicular head was marked. The needle insertion site was marked approximately 3 cm caudal to the midpoint of the line connecting coracoid process and medial clavicular head. The insertion site was infiltrated with local anaesthetic 2% with 25 G needle. A 100 mm, 21 G insulated needles, attached to nerve stimulator, was inserted at 45° angle to the skin and advanced parallel to the line connecting the medial clavicular head with the coracoid process. The nerve stimulator is initially set to deliver 1.5 mA at 1 Hz. As the needle is advanced, local twitch of the pectoralis muscle is elicited. Once they disappear as the needle advances deeper the patient was observed for the motor responses of the brachial plexus. The goal was to achieve a hand twitch [finger extension] using a current of 0.2 to 0.5 A. Insertion of the needle too medially should be avoided to prevent the occurrence of pneumothorax. With meticulous technique the incidence of pneumothorax is almost negligible. After achievement of the desired response to nerve stimulator, the appropriate volume of local anaesthetic with adjuvant was slowly administered to patients according to the group allocation. The loaded syringes were supplied in sealed envelopes just before the institution of nerve block in wrapped in aluminium foils to ensure blinding. The principal investigator who was aware of the group allocation loaded the syringes and supplied them to the senior anaesthesiologist who instituted the nerve stimulator guided infra clavicular blockade. The anaesthesiologist who performed to infraclavicular block and the senior post-graduate who performed intra operative and post-operative observations and recording of the data were unaware of the study drugs and also group allocation which ensures blinding.

After institution of infra clavicular block, the following parameters were monitored in every patient.

• Requirement of rescue analgesia in the postoperative period was also observed.

• Onset of sensory block is defined as the time in minutes from administration of block to absence or decrease of any onset of motor block sensation in the operative area.

• Duration of sensory block in the time of drug administration to complete resolution of motor block.

• Quality of intra-operative block is assessed on a grading system as excellent, fair and failed block

• Duration of post-operative analgesia is defined as the time in monitor from administration of the block to patient’s first request for analgesia.

A total of 50 patients were enrolled for this study. One patient had failed block and was excluded from the study.

Quality of intra-operative blockade is assessed by grading system shown in Table 2 as excellent, fair and failed Block. In group D, 24 patients had excellent blockade and 1 patient had fair blockade. In group K 22 patients had excellent blockade, 2 patients had fair blockade and 1 patient had failed block. The patient who had failed block was given general anesthesia and was excluded from the study, represented in Figure 1. Haemodynamic parameters of mean HR and mean SBP at different time intervals throughout the procedure were comparable between the two groups as represented in Figure 2. Sensory and motor Block characteristics were represented in Table 3, Table 4 and Figure 3. There was no significant difference in the mean onset of sensory Block which was 8.20 ± 0.05 minutes in group D and 7.50 ± 0.35 minutes in group K (p=0.067) respectively. The mean onset time of motor Block was also comparable between two groups, 15.04 ± 0.14 minutes in group D and 14.40 ± 0.40 minutes in group K, with p>0.05, statistically insignificant. 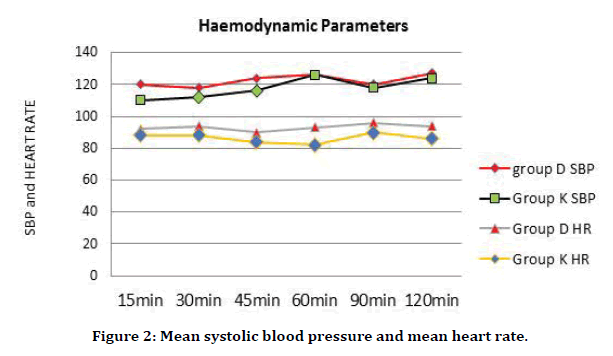 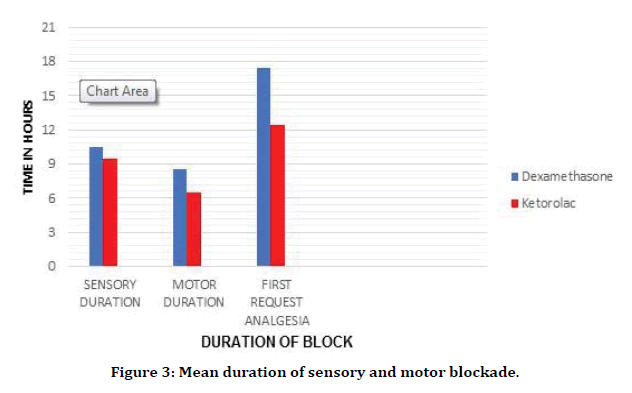 The post-operative analgesic requirement was reduced in both the groups but significantly reduced in dexamethasone with Ropivacaine group compared to ketorolac with Ropivacaine, group D 24% versus group R 32% required supplemental analgesia post-operatively as represented in Table 5. None of the patients in both the groups complained of adverse effects.

Dexamethasone, which is a synthetic glucocorticoid and potent anti-inflammatory agent, has gained interest recently for its role as an adjuvant analgesic along with perineural Blockade as well as other regional and general anaesthesia techniques [9]. Several potential mechanisms of action included suppression of C-fibre transmission of pain signals and reduction of neuronal discharge by the nerve cell [10].

Ketorolac is a perineural NSAID which provides analgesia by inhibition of prostaglandin synthesis, studies proved that ketorolac alone produces adequate pain relief when administered parenterally or via wound infiltration [13]. There are few clinical studies that proved the efficacy of ketorolac to prolong the duration of analgesia when administered as adjuvant with LA in perineural Blockade and also IVRA [14]. Ketorolac may be preferred because of its opioid sparing effects. In standard doses ketorolac produces analgesia equivalent to 6-12 mg of morphine for duration between 6-8 hours. With the advent of neuro muscular stimulator and ultrasound guidance infraclavicular Block has become the choice of peripheral nerve Block for fore arm and hand surgeries. As coracoid approach requires multiple injections for success (according to reports by various clinical trials) medial approach was preferred in this study for infraclavicular block [15].

Mirkheshti et al. evaluated the effects of Dexmedetomidine versus ketorolac as local anaesthetic adjuvants on the onset and duration of infraclavicular brachial plexus Block and concluded that the time to first request analgesia was significantly longer in ketorolac group (p=0.016: p<0.001) than Dexmedetomidine had better effects on sensory and motor Block duration and motor Block onset in comparison with ketorolac [16].

Elyazed et al. evaluated nitro-glycerine and ketorolac as adjuvants to lidocaine for IVRA in patients undergoing fore arm and hand surgeries and concluded that both agents improved the quality of pre-operative analgesia but ketorolac was superior in delaying onset of tourniquet pain and prolonging the duration of post-operative analgesia [18]. In the above studies ketorolac had significantly prolonged the time to first request analgesia when administered perineurally or IVRA along with local anaesthetics. In the present study also, ketorolac produced effective analgesia when administered perineurally with local anaesthetics.

Basenko et al. evaluated the use of Ketorolac as adjuvant in brachial plexus Block with Bupivacaine and concluded that addition of 30 mg of Ketorolac to 40 ml 0.25% Bupivacaine effectively prolonged the duration of postoperative analgesia without significant modification of haemodynamic parameters, the observations were similar to the results of our study with respect to ketorolac [19].

There are two limitations in this present study. Firstly, the sample size is small and secondly, patients were not followed up for prolonged periods. Patients were followed until discharge only. None of the patients in the present study complained of any neurological adverse effects with the doses used. Hence this study also recommends future research regarding the perineural administration and optimal dosage of dexamethasone.