To Study the Different Patterns of Facial Pigmentary Demarcation Lines

In our study, out of 150 patients with Facial PDL majority of cases were Females (87.3%) and only few males (12.7%), among the Females, Facial PDL Type F was the most common followed by Type H and Type G. There is an association between Facial Pigmentary Demarcation Lines Type F based on gender. In this study more than one type of Facial PDL exists in females, which is Type F+ H and Type G+ H and 36 (24%) cases had periorbital melanosis along with facial pigmentary demarcation lines as shown in Table. Group F PDL may present as Periorbital melanosis.

Pigmentary Demarcation Lines are physiological abrupt transition lines between hyperpigmented skin and lighter areas. These are sharply demarcated lines that occur on different parts of the body. They have been considered as an atavistic / ancestral remnant where, the skin over back is pigmented more than in the front, providing better sun protection. One should have a clear idea about variations in normal skin colour to understand abnormal skin discolorations.

The distribution of melanin (the pigment responsible for human skin colour) is also uneven in a given race, for e.g., in Europeans the upper thigh is darker than the lower back (lightest area). Some darkly pigmented areas are regarded as normal, such as the elbows, knees, knuckles, genital area Pigmentary demarcation lines are deep line that bifurcate the hyperpigmented skin from the lighter area which is found at any part of the body.

So far, eight pigmentary demarcation lines have been described and categorized according to the letters A-H. Five types (A-E) occur on different parts of the body. Three facial patterns (F-H) have been commonly described in the skin of Indians. Their appearance is distinctive enough to be recognized as a common variant of normal pigmentation in the Indian sub-population [1-2].

This study will include 150 patients with facial Pigmentary Demarcation Lines attending the outpatient department of Dermatology and Venereology in Sree Balaji Medical College and Hospital in the period of 2014 to 2016, after written informed consent.

Patients of all ages with facial pigmentary demarcation lines.

Then each patient will undergo detailed general physical, systemic and dermatological examination. The diagnosis of facial pitntary demarcation line and its type will be noted. Photographs will be taken for documentation.

This study was undertaken after obtaining from the ethical committee of SBMCH. The consent from (Voluntary Consent by The Participant), Certification of Informed Consent, proforma and the master chart are enclosed in annexure 1,2,3 & 4 respectively.

A Prospective, observational, single point study on different types of Facial pigmentary demarcation lines was carried out. Statistical methods are the mathematical techniques used to facilitate the interpretation of numerical data secured from groups of individuals or groups of observations. The statistical tool applied for the present study is Frequency, cross tabulation, and Chi-square test. These set of tests or techniques helped to find out the variability and to describe quantitatively the degree of relationship existing between measures of different characteristics. Appropriate graphs like bar diagrams, pie charts, box and whiskers plots were used to display the data.

Table 1: Shows distribution of cases according to gender (N=lS0).

Table 2: Shows distribution of cases according to periorbital melanosis (N=lS0). 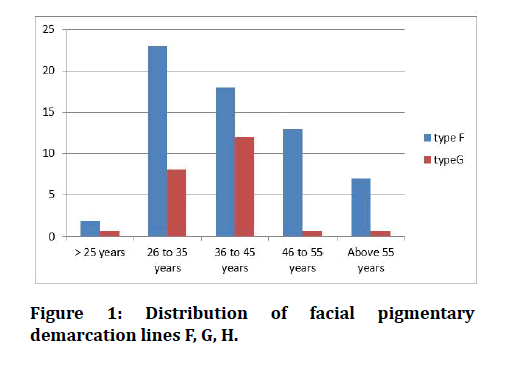 In our study, out of 150 patients with Facial PDL majority of cases were Females (87.3%) and only few males (12.7%) from this we can confirm that hormonal influence can be one of the reasons also majority of the cases were between the age group of 25 to 55 years. These results are contradicting a similar study done by Scott et al. [3]. PDL can present even at the younger age, but can will go unnoticed later will progress by some triggering factor such as hormones [4-10]. More than one type such as Type F+H and G+H were noted among females, amongst which Type F+H were found to be high in this study also 24% of cases had Periorbital melanosis.

In this study we observed, the different patterns of facial pigmentary demarcation lines, which are of 3 types F, G & H in both males and females. We found that majority were Females (87.3%) than Males (12.7%) Majority of them were between the ages of 25 to 55. In Females, Type F was the most common type, followed by Type H and then Type G. In Males majority were of G type followed by Type F and then Type H. More than one type such as Type F+H and G+H were noted among females, amongst which Type F+H were found to be high. No such overlap was found in males. In our study 24% of cases had Periorbital melanosis.