To Study the Relation Between PFT Abnormalities and Nasal Smear in General Population Residing in and Around Quarry in Zamin Pallavaram, Chennai

The percentage predicted value of FVC (74.58 ± 20.59) was lesser than the percentage predicted value of FEV1 (77.41 ± 21.17) indicating that the vital capacity f the lung was more affected. it is evident that all the spirometric variables except FEVl % (FEVl/FVC ratio) are decreased, i.e., they are less than 80%. Hence it can be seen that both FEV1 which indicates the large airways, and FEF 25-75% that indicates smaller airways are both affected in our study population. The fibroblast stimulation factors that are released, cause collagen deposition and hyalinization. Hence the final lesion is a hyaline nodule, which contains a central zone with free silica that is surrounded by fibroblasts and collagen. Hence, the silica particles, which are deposited cause irritation of the respiratory mucosa, hypertrophy of the sub mucosal glands and hyper secretion of mucus. The hyper secretion especially in the large airways 1s stimulated by the proteases released from the neutrophils. we can see that there is slight increase in the hemoglobin level in the people having obstructive lung disease though it may not be significant. it is evident that the total WBC count is not much altered in the affected groups when compared to people with normal pulmonary function, there is significant change in the lymphocyte % in the people with restriction.

It is known that au Pollution is associated with increased cardiopulmonary morbidity and mortality. Air Pollution can be broadly classified into two categories namely (a) reducing type pollution from combustion and photochemical pollution - from reactions involving UV radiation. Though several studies have been done to find out the lung function in stone quarry workers, or miners, 01:1-Iy a very few studies have been done to know the effect of industries such as mining industries, stone crushing industries, cement industries on the general population living around the industries which are a potential source of air pollution. Some of the studies show that even low dust level exposure for longer duration can affect the lung functions in the workers because of their exposure to silica dust [1-5]. On the other hand, risk of developing respiratory diseases is more in children and females due to emissions of industries for those who are living near them. Lung function is assessed with the help of spirometry. Restriction or obstruction of the lung can be measured with the help of several spirometric measures. Spirometry gives three important measures:

Pulmonary function tests are a significant key factor to assess the respiratory health. Plenty of studies are being done so far to find out the impact of pollution on lungs. From the findings it said that elevated particulate matter exposures influence the impairment of lung functioning [1,2]. Some of the studies show that even low dust level exposure for longer duration can affect the lung functions in the workers because of their exposure to silica dusts. So, keeping these issues in mind, we aimed to test the pulmonary function of the general population who live around the Quarry or stone crushing unit in Zamin Pallavaram, Chennai, Tamil Nadu.

This study was carried out m the Department of Physiology, Sree Balaji Medical College and Hospital. We recruited 60 subjects who were residents of Zamin Pallavaram, Chennai. Study was conducted after obtaining approval from the Institutional Ethical Committee. Questionnaire was given to all subjects to obtain information regarding family history, history of allergic rhinitis, duration of stay in that, rea. A wellinformed consent was obtained from all those who participated in the study. Pulmonary function tests, blood investigations and nasal smear was all done on the same day.

The subjects were included in the study based on the following inclusion and exclusion criteria.

All the values were expressed and Mean ± SD. The various spirometry variables namely FEY1, FYC, FY1/FYC ratio (FEY 1%), PEFR, FEF 25-75 were compared between the predicted value and measured value using the two-tailed unpaired t test. One-way ANOYA was done to find the significant difference between the various parameters of haematological indices with the  pulmonary function abnormalities. Post Hoc analysis was also done.

All the values were expressed and Mean ± SD. The various spirometry variables namely FEY1, FYC, FY1/FYC ratio (FEY 1%), PEFR, FEF 25-75 were compared between the predicted value and measured value using the two-tailed unpaired t test. One-way ANOYA was done to find the significant difference between the various parameters of haematological indices with the  pulmonary function abnormalities. Post Hoc analysis was also done. 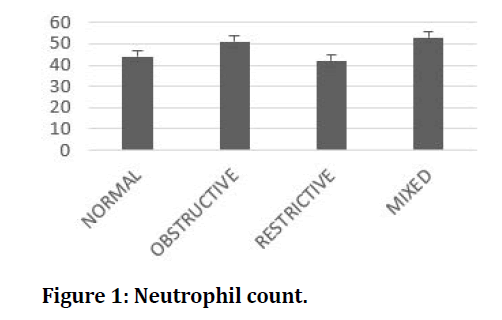 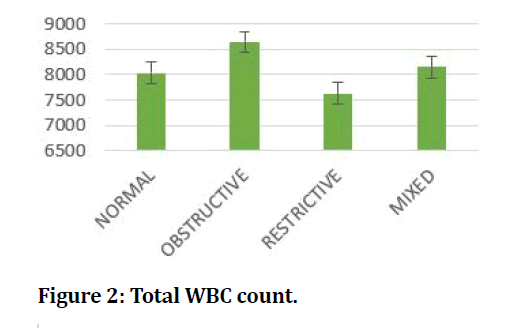 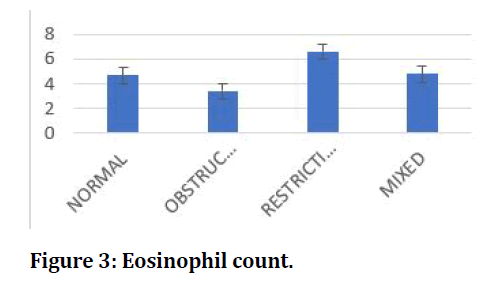 An-Soo Jang demonstrated that the bronchial hyperresponsiveness may be due to nasal eosinophilic inflammation. In our study, Nasal smear was positive for two out of three subjects who had obstructive lung disease. Those who had restrictive lung disease were negative for nasal smear for eosinophils and the cytology had predominantly neutrophils.

There was significant difference in the lymphocyte % the restrictive group indicating the role of chronic inflammation in the pathogenesis of restriction. However, the difference in eosinophil % was non-significant. The allergic response in obstructive lung disease was evident by the presence of eosinophils in nasal smears [6-10].