Transcanal approach with endoscopic guidance is a useful technique for the treatment of cholesteatoma. During atticotomy, the attic is revealed and the opening is then extended to the antrum and mastoid cells. Atticotomy avoids unnecessary procedures, such as a wide (extended) mastoidectomy and provides better exposure of the sinus tympani, facial recess, and hypotympanum. It avoids the complications involved with Korner’s septum, an anterior sigmoid sinus, and a low-lying dura. In this we review the indications, techniques and present the advantages and disadvantages of this technique in detail.

Atticotomy is excision of lateral wall of attic region .This region can be exposed via external auditory canal in anterior atticotomy. In anterior atticotomy the attic is opened and the opening is then extended to the antrum and the mastoid cells. In the posterior approach a mastoidectomy is performed and the attic is approached via this cavity .When deciding on the treatment policy for an atticcholesteatoma, whether the cholesteatoma can be treated by atticotomy alone or whether the mastoidantrum must be opened is generally determined according to the depth of invasion based on preoperative examination of the tympanic membrane and the results of CT scanning and operative findings [1-3].

As it is known, the attic or epitympanic space forms the upper one-third of the tympanic cavity, bounded superiorly by the tegmen tympani, anteriorly by the bone that separates the cavity from the middle cranial fossa, inferiorly by the horizontal plane passing through the most superior level of the pars tensa, posteriorly by the antrum and mastoid cavity, and medially by the facial nerve, geniculate ganglion, and lateral and superior semicircular canals. It contains the head of the malleus and the body of the incus, which are suspended by ligaments dividing it. 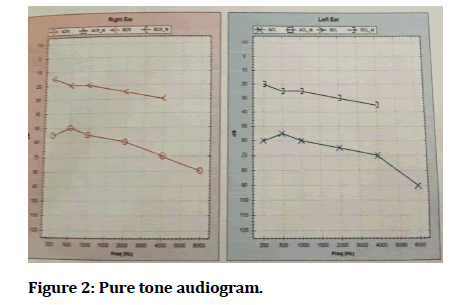 Figure 4:Cartilage being kept for reconstruction. 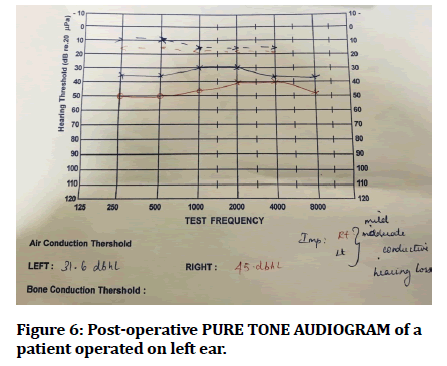 Management of unsafe type of chronic otitis media (COM) generally requires surgical intervention. Atticotomy, reconstruction of lateral epitympanic wall and tympanoplasty with cartilage/perichondrium, indicated to be a reliable treatment and prevents epitympanic cholesteatoma. The objectives of cholesteatoma surgery are to remove the diseased mucosal and bony tissue, achieve a healthy and dry ear, using the most suitable technique possible to prevent recurrence and residue.

A post auricular or endaural approach can be used following local injection of lidocaine 2% with 1:100,000 epinephrine. The cartilage graft with its perichondrium isobtained from the tragus cavum concha. The perichondrium is elevated only from the convex side of the cartilage.

The metal flap and tympanic membrane are elevated from the bone by applying incisions at 6 or 12 o’ clock respectively.

Evaluation of the middle ear

After exposing the bone of the superior and posterior portion of the canal, the lateral epitympanic wall is removed with small cutting burrs progressing superiorly, anteriorly, and posteriorly until the diseased area is fully exposed. To avoidsensorineural hearing loss, the rotating burr must not be allowed to contact the ossicles. Theincudostapedial joint is separated with a joint knife to avoid this complication when drilling close to the incus.

The attic wall is removed with burr until a thin layer is left over the ossicles. The bone layer is then removed with currents to expose the tegmen tympani, also exposing the incus, malleus, and stapedius. Pathologies, such asossicular erosion and congenital fixation, can be corrected and mobilization of the incus and malleus can be restored. Mobility of the stapedius is examined. Cholesteatoma including the granulation is removed and reconstruction done with cartilage obtained from concha placing in the lateral wall of attic and the small defect that remain are covered by temporalis fascia which is kept lateral to cartilage which also covers small defect in tympanic membrane by underlay method and external auditory canal is finally packed.

Total resection of cholesteatoma was possible bytranscanal atticotomy combined with the use of arigid endoscope. The mucous membrane of the epitympanumand the region from the aditus and antrum to its distal end could be preserved intact when the cholesteatoma was removed under endoscopic control. The mastoid cavity showed a tendency for early pneumatisation when the retained fluid in the antrum was adequately aspirated at the surgery. This procedure indicates that the trans-canal approach with endoscopic guidance is a useful technique for the treatment of atticcholesteatoma.