Adnexal lesions are a common clinical problem, a common cause for morbidity and mortality in female population. An estimated 5 - 10% of women undergo surgery for suspicious adnexal lesions, less than 25% of which prove to be malignant. The surgery for a benign lesion is a simple excision, but for malignant adnexal lesion radical surgery is performed. Since there is a considerable difference between these two types of surgeries, it is important to differentiate malignant and benign diagnoses to direct patients to the appropriate treatment algorithm. The benign or malignant nature of a clinically diagnosed adnexal lesion is frequently not evident before surgical exploration and histological examination. A reliable method to differentiate benign from malignant adnexal lesions would allow for appropriate subspeciality referral, optimal preoperative planning, and counselling of the patient [1].

Ultrasonography (US) is the accepted primary imaging technique for evaluating adnexal lesions because of its widespread availability, relatively low cost and high sensitivity in the detection of lesions. Many women need no other imaging if the lesion has features indicating that it is clearly benign. However, sonography is limited by its decreased specificity for diagnosis of benignity [2-5].

Magnetic resonance imaging (MRI) has been shown to have potential for tissue characterization of adnexal lesions, and contrastenhanced MRI has been reported to be more accurate than US for assessing them [6].

A prospective study was performed with 40 women between October 2014 and September 2016 (period of 2 years) who were referred to our hospital with clinically suspected adnexal lesion. Informed consent was taken from each patient and they were instructed to be on fasting for at least 4-6 hours before the scan time. Each patient underwent ultrasound examination, followed by MRI within a period of 1 week. These participants had a laparotomy whenever indicated and based on the surgical and/ or pathological findings were categorized as having benign or malignant lesions. Lesions with absolute benign nature were followed up for results.

99 Patients willing to undergo this study.

99 Any absolute contraindication for MRI like metal implants/ ferromagnetic substance in the body.

Method of collection of data

Detailed clinical history and consent were taken from patients or their attenders. Ultrasound of pelvis was performed on every patient on Seimens Acuson 2000 ultrasound machine. Transvaginal scan was performed whenever required. The US images were evaluated prospectively without knowledge of the serum tumour marker, CA- 125, or MR findings. For each participant, the presence of ascites and lymphadenopathy was documented on the TAS examination. The lesions were measured, and each lesion was categorized as solid, solid-cystic or cystic. For cystic lesions wall thickness and regularity, the presence of soft tissue nodules and septa were documented. On Doppler examination, the presence of vascularity in lesions was noted. Following US examination, a subjective assessment was made as to whether each lesion was malignant or benign.

The US and MRI characterization of the subjects was compared with the final diagnosis. Data were analyzed with student t test/z test. Chi square test was adopted (with the Yates correction as appropriate) for categorical variables. Descriptive statistical values including sensitivity, specificity, and positive and negative predicative values were determined.

The US and MRI characterization of the subjects was compared with the final diagnosis. Data were analyzed with student t test/ z test. Chi square test was adopted (with the Yates correction as appropriate) for categorical variables. Descriptive statistical values including sensitivity, specificity, and positive and negative predicative values were determined.

A correlative study with 40 patients to study the role of ultrasound and magnetic resonance imaging in adnexal lesions and to correlate their findings. Table 1: Age distribution of the patients is mentioned in table 1.

Table 1: Age distribution of the patients. 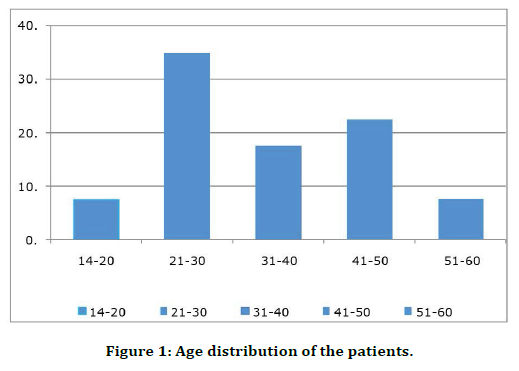 Figure 1. Age distribution of the patients. Coronal T2 W and Tl W post contrast images show a well-defined predominantly solid with cystic component lesion in the pelvis with solid component of the lesion showing minimal enhancement on contrast study (Figure 4). Maximum cases diagnosed by MRI were benign lesions (Table 3). In 28 (70%), both USG and MRI gave same diagnosis. However, 12 cases had controversies between the characterization of the lesion. (Table 4 and Figure 5). MRI has better sensitivity, specificity and accuracy in diagnosing overall adnexal lesions. However, it is more significantly sensitive and specific in the diagnosis of malignant lesions (Table 6 and Table 7), (Figure 8 and Figure 9). A prospective study was performed with 40 females who presented with clinically suspected adnexal lesions. Evaluation of adnexa has evolved significantly in past decade due to application and advancement of ultrasound and magnetic resonance imaging. The current study evaluated the role of ultrasound and magnetic resonance imaging in adnexal lesions [9]. Accuracy and effectiveness of both modalities in characterising the adnexal lesions were correlated and compared. This study comprised of females between 14 to 70 years with mean age of 37.5 years. Most of the patients were in reproductive age.

In present study, all the 40 patients underwent Transabdominal ultrasound and Transvaginal ultrasound was performed wherever applicable. MRI was performed on all patients and diagnosis of both USG and MRI was compared with the results that included histopathology, operative findings or through follow up.

USG also picked up 2 cases of solid malignant lesions of the ovaries which were correlated with similar features on MRI. On USG a case of carcinoma cervix with parametrial extension was diagnosed as ovarian pathology. MRI in this case was able to tell the origin of the lesion.

A case of benign germ cell tumor was called as malignancy on USG because of its large size and solid- cystic component and associated minimal free pelvic fluid [18]. However, MRI could suggest its benign nature due to well defined margins and no evidence of adjacent organ invasion.

This study has one case of dermoid cyst which was diagnosed correctly by both USG and MRI because of its solid cystic nature and hyperechoic fat content. On fat-sat MRI, presence of fat was confirmed.

3 cases of subserosal fibroids are present in this study, out of which only two were diagnosed by USG and confirmed by MRI. One case of subserosal fibroid was mistaken as a solid ovarian lesion, in which MRI was the problem-solving tool in recognising organ of origin [19,20]. This was similar to study carried out by Fleischer, et al. where MRI was more accurate than USG [21].

One case of vaginal hypoplasia with hematosalpinx was diagnosed in this study. USG could delineate the dilated fallopian tubes and recognise few echoes within. However, MRI could characterise the hematosalpinx as well as recognise the cause as vaginal hypoplasia. However, another case of hydrosalpinx was not picked up by USG which was delineated on MRI.

One case of peritoneal inclusion cyst was recognised on both USG and MRI and its benign nature was identified with no obvious difficulty. There were 7 (17.5%) cases in the study in which USG could not conclude any specific diagnosis. This was like study conducted by Schwartz et al. [22] where they had 26% doubtful cases. There was also confusion regarding the benignity of the lesions. In such cases MRI played a problemsolving role. One was diagnosed as subserosal fibroid, one as tubo-ovarian abscess, one as endometriosis, one as dilated fallopian tube, one as hemorrhagic cyst and the last as malignant neoplasm of ovary.