Ultrasound Imaging of Complications of Arterio Venous Fistula for Dialysis

Harshini U and P Naveen*

Haemodialysis (HD) being the valuable unearthing discovery of last century transfigured the management of renal failure patients. In end stage renal diseases vascular access (VA) is the ‘life vest’ of the patient, paving a path for the hemodialysis therapy. Arterio-venous fistulae (AVF) are the favoured access for hemodialysis [1,2]. With a persistent rise in the numbers of patients requiring HD, consequentially post procedure complications show a steady elevation and have been a major contributor to morbidity together with hospitalization subsequently and ultimately escalated cost to HD patients.The numeral prospective sites VA for HD per patient is finite. Therefore, ameliorative steps towards the longevity of VA are essential [3]. AVF failures chalk up to inadequate vessels used for surgery. Pre-operative (PO) Doppler Ultrasound (US) evaluation with is a an outstanding choice that may smoothen the selection of satisfactory vessels and bring down AVF failures.

US is an the best modality for a HD access evaluation as is efficient, easily available, in expensive and noninvasive .With the advancement of high-resolution US scanners, it is now possible to obtain qualitative and quantitative data prior to surgery and thereby help in planning. The advanced anatomical knowledge acquired with sonography may alter surgical management with a surge in the number of AVFs versus AVGs stationed. There is a lack of conventional venography procedure risks such as phlebitis or contrast reaction . There is an advantage of obtaining more vascular details than any physical examination also. It is of chief importance in patients with poorly visualised veins as in obese or bulky individuals, diabetics, elderly and patients with prior access history [4-6]. This study is purposeful to know various complications causing AVF failure and the use of PO sonographic mapping on planning access placement with the successive decrease in negative surgical exploration [7].

After the initial preparation are done for the patients the scanning of distal SA and axillary arteries are performed. The assessment of the forearm veins and arteries to determine if the patient is a candidate for the most desirable initial haemodialysis access type , a forearm AVF is done. The subclavian vein, brachiocephalic vein and the brachial artery venae commitantes are examined ultrasonographically and evaluated for the presence of intra-arterial thrombus . Figure 2. Method of measurement by US. 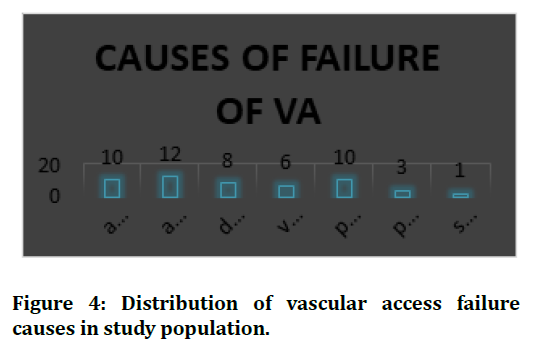 The most common side of placement of AVF/ AVG was observed to be right side in 31 patients and on the left side in the remaining patients. 58% of the patient had a pre fistula evaluation done prior to the vascular access placement and about 21 patient did not have a pre fistula evaluation performed. The most common cause of vascular access failure was observed to be access vein thrombosis. 12% of the cases were of access vein thrombosis with the most common being thrombosis of the cephalic vein in our study population. There was an equal occurrence of access vein stenosis and puncture site hematoma observed in the study that lead to failure of smooth functioning of the vascular access. The patients with AVG were analysed to have Maximum cases of access vein stenosis occurring in about 46 % of the cases and the least was of Access vein thrombosis and venous hypertension noted in 1 out of 11 cases of AVG each ,respectively. Some had a AVF placed purely on physical examination prior to surgical creation and some had a dedicated pre fistula ultrasonogram and Doppler study performed. Of the total number of patients 21 patients had a pre fistula work up performed and 29 did not have one performed. These vascular risk factors are associated with increased risk of AVF failure,these results are similar to the previous work done by other groups [8-10]. They are most likely to have marginal vessels. A total of 2 patients had pain during the dialysis procedure and proved to have no ultrasonological abnormality. Hence USG proved useful to rule out any significant abnormality that could potentially affect the dialysis treatment and the patient was reassured. Hematoma shows no colour flow and In some obese patients I whom physical assessment was not satisfactory, ultrasound proved as an extremely useful modality to clearly evaluate the arterial and the venous system prior to fistula creation. This obviates the significance of ultrasound in aiding the unnecessary surgical exploration and reducing the number of failed fistulas.

AVF failures are attributed to inadequate vessels used for surgery. USG assisted AVF results in, Less immediate failure, Less early AVF thrombosis, Better, assisted primary AVF survival. Preoperative vascular mapping by sonography prior to haemodialysis access placement facilitates a definitive selection of potential sites in the difficult patient population, maximising the placement of native AVFs. Especially those in whom evaluation by physical examination proved to be inconclusive. Clinical assessment of an few complications with overlapping signs and symptoms can be ruled out and help arrive at a definite diagnosis using DUSG. Clinical assessment is inconclusive as in (obese pt., absent pulses, multiple previous access surgery) for which ultrasound examination proved is indispensable.

Harshini U and P Naveen*