Aim: The aim of this clinical study was to compare the influence of 2 different suturing techniques on postoperative complications and wound healing after surgical extractions of impacted mandibular third molars. Materials and methods: In this randomized split mouth study, 30 patients were examined in whom 60 consecutive surgical extractions of symmetrically positioned impacted mandibular third molars were performed. After the extractions, the surgical flaps were sutured with either the sling or horizontal mattress suturing technique. Postoperative swelling and trismus were recorded on the 3rd, 7th, and wound dehiscence was recorded on the10th postoperative days. Results: The sling suture was significantly superior regarding the improvement of periodontal pocket depth. The dehiscence was significantly smaller in the horizontal mattress suture group 7 days postoperatively. This difference was not significant 14 days postoperatively. Conclusion: The results of this study show that the sling suture was superior to the horizontal mattress suture regarding periodontal pocket depth. Whereas horizontal mattress suture showed better healing compared to sling suture. However, the technique of suturing does not seem to have a significant long-term effect on wound dehiscence.

In general, 90% of the world’s population have third molar teeth, which are impacted in 33% of the cases [1]. Surgical extraction of impacted third molars traumatizes the hard and soft tissues. Resultantly, patients often experience pain, edema, and trismus postoperatively, which decrease their quality of life [2-5]

Wound dehiscence (separation of wound edges) is among the complications that can delay wound healing. Dehiscence often occurs due to two main reasons, namely the absence of a sufficient amount of bone beneath the flap and suturing the wound under tension [6]. Primary closure of the flap decreases the incidence of dehiscence after suturing and improves wound healing. In some cases, dehiscence may occur secondarily and heal with no complication. However, patients experience discomfort and constant pain during this period. Moreover, dehiscence may result in alveolar osteitis or clinical attachment loss (CAL) at the distal surface of the adjacent second molar tooth [7]. Periodontal problems at the distal surface of the second molars are among other possible complications following surgical extraction of impacted mandibular third molars [8]. Age, third molar inclination, large contact area, visible plaque on the distal surface of second molars, and pathologically enlarged third molar follicles are among the risk factors related to periodontal pocket formation around second molars adjacent to impacted third molars [9]. Surgeons can take measures to minimize the risk of postoperative complications [6].

There is controversy regarding the effects of techniques of wound closure following third molar extraction surgery on the rate of complications. Wound closure can be categorized into two types of primary and secondary closure. Primary closure is defined as primary complete coverage of the surgical site with the muco periosteum. In secondary closure, a window remains, which is managed secondarily [10]. Plaque accumulation affects wound healing, and dehiscence occurs due to the presence of inflammation. Unlike the single interrupted suture, the knot in the sling technique is located far from the distal surface of second molars where dehiscence mostly occurs [11,12]. Different suturing techniques are employed for advanced soft tissue closure [13]. The single interrupted suture is used to approximate the buccal and lingual flaps. The sling suture is also used to prevent gingival recession around teeth and dental crowns [6]. Sling sutures are used to cover the exposed root surfaces in advanced flap surgeries and to attach the papilla to the interdental connective tissue. The efficacy of single interrupted and sling sutures after impacted third molar extraction surgery has not been compared so far. Considering the advantages of sling sutures in decreasing postoperative complications, this study aimed to compare sling and single interrupted sutures in terms of dehiscence, probing pocket depth (PPD), and CAL around the adjacent second molar tooth after surgical extraction of third molars to find out whether the sling suturing technique can decrease postoperative complications.

This split-mouth randomized clinical trial involved patients with impacted mandibular third molars requiring surgical extraction. The study has been approved by the Ethics Committee of Saveetha dental college and hospitals. The variables were PPD, CAL, healing and wound dehiscence, which were evaluated after surgical procedures. A total of 60 mandibular impacted third molar surgeries were performed on 30 patients on separate occasions. Each patient had fairly symmetrically positioned, bone retained asymptomatic and class III B surgical difficulty grade (scales of Pell– Gregory and Winter) mandibular third molars. Patients with any systemic disease, pregnancy, poor oral hygiene or aged <18 were excluded from the study. All surgical procedures were performed by the same surgeon with the same flap design.

The inclusion criteria were as follows: patients with equal bilateral semi-impacted or impacted mandibular third molars. The degree of impaction was determined according to a classification by Pell and Gregory. The soft tissue coverage over the teeth was determined using a probe. Patients were between 18 to 25 years of age, nonsmokers, systemically healthy, not pregnant or nursing, and not taking any medication within the past six months; they had no inflammatory condition (such as acute pericoronitis or periodontal disease), patients with good hygiene were included in the study. The exclusion criteria included patients with asymmetrically impacted teeth, the presence of inflammation in the oral cavity, poor oral hygiene.

The surgeries of right and left impacted mandibular third molars were performed in 2 sessions at a 4-week interval in all patients. The type of suturing technique was randomly selected for each side. Before the surgery, all patients were given 0.2% chlorhexidine mouth rinse for 30 seconds. Then, local anaesthetic lignocaine with 1:200,000 adrenaline was administered to sustain local anaesthesia of the inferior alveolar nerve and buccal nerve respectively. All impacted mandibular third molar surgeries were performed with the traditional triangular flap. The surgical incision was started from the rising edge of the anterior border of the mandibular ramus to the distal surface of the distobuccal cup of the mandibular second molar. The incision was then continued along the sulcus of the buccal side of the mandibular second molar. Finally, a vertical incision was made to relieve the flap. The mucoperiosteum was elevated with a periosteal elevator and the alveolar bone around the impacted molar was removed with a round burr under saline irrigation. The impacted tooth was sectioned with a fissure bur and extracted using an elevator and a third molar forceps. The primary wound closure of each patient was applied with the sling sutures on 1 side (Group A) (Figure 1) and with horizontal mattress sutures on the other side (Group B) (Figure 2) using 3/0 synthetic silk sutures. All vertical releasing incisions in all patients were sutured with simple interrupted sutures to relieve edema (Figure 1). After the surgery, the patients were prescribed NSAIDs twice per day, 500 mg amoxicillin 3 times per day, and 2% chlorhexidine gluconate for 5 days. All patients were recalled on the 3rd and 7th days postoperatively for the evaluation of postoperative complications. 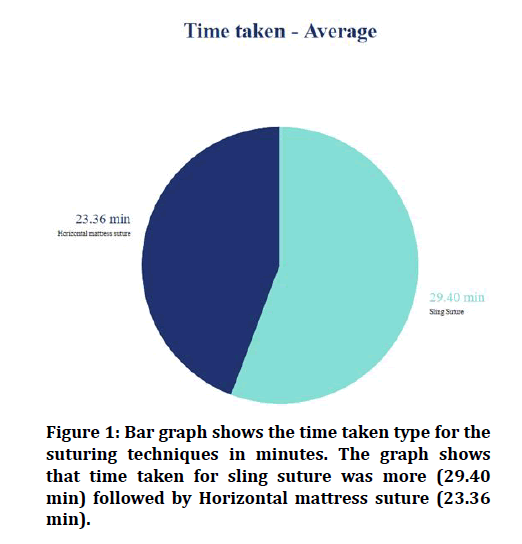 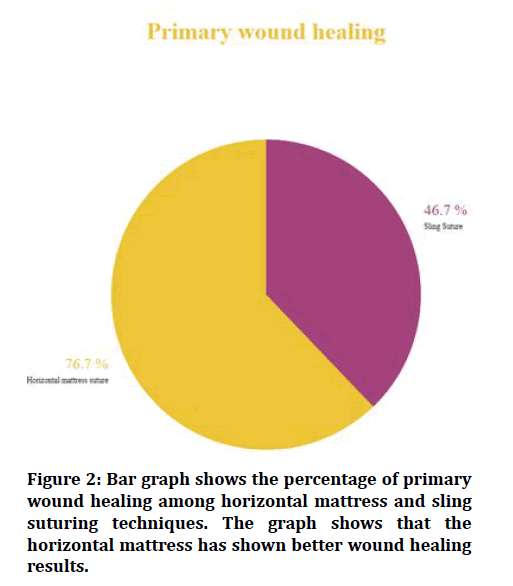 This study included 30 patients, comprising 16 females and 14 males with a mean age of 23.2 ± 3.06 years (range, 20–28 years). In all patients, the alveolar bone was removed and the teeth were sectioned. The average time of the surgical procedures was 29.40 minutes for the sling suturing group and 23.36 minutes for the horizontal mattress suturing group.

Dehiscence is defined as a distance between the lingual and buccal mucosa. Dehiscence was measured using a Michigan O probe with Williams’s markings. PPD is defined as the distance between the gingival margin and the depth of the pocket expressed in millimetres (mm). PPD and CAL were recorded preoperatively and averagely 4 weeks postoperatively. Dehiscence was evaluated 7 and 14 days postoperatively. All assessments were made by a dental student who was blinded to the protocols done before.

Third molar impaction can cause cystic and neoplastic changes, orthodontic and prosthodontics problems, and even temporomandibular joint (TMJ) symptoms [13-17]. This study compared the efficacy of single interrupted and sling sutures following third molar extraction surgery regarding postoperative sequelae wound healing, dehiscence, PPD, and CAL. This study had a split-mouth design and the same surgeon performed all surgical procedures. Thus, the effect of confounders such as age, gender, the technique of surgery, and the experience and expertise of the surgeon on the results was eliminated. Because the preoperative impaction and parameters were reported very wide range, the results and mean parameters ranged over many amounts.

Yolcu et al. [18] evaluated postoperative swelling, trismus, pain, and primary wound healing after mandibular third molar surgery using 2 different flap techniques. They used a dental tweezers to determine the primary wound closure. Elo et al. [19] defined wound dehiscence after third molar surgery as a gap of the surgical wound edges along the sutures. In the current study, the healing process was evaluated without applying an active force. If there was a little opening along the incision, it is evaluated as a wound dehiscence. Also the photographs of the surgical areas were taken to be used for objective evaluation. Wound closure was clinically evaluated on the 7th day during suture removal; some of our patients experienced minor bleeding and suffered from pain. We believe that further studies are needed to be done to clarify the evaluation of wound closure after third molar surgery

According to our results, horizontal mattress suturing has no negative impact on postoperative trismus, pain, and swelling, and is superior to sling suturing in terms of primary wound healing. Whereas in terms of PPD and CAL sling suturing showed superior results. However there are some limitations of our study. Such a horizontal mattress suturing did not decrease the pain, swelling, and trismus level in this study, but faster primary healing established by the mattress suturing may decrease the postoperative complications. Also quantity and quality of keratinized gingiva around the third molar could not be evaluated since all the third molar teeth involved in this study were impacted. We recalled the patients on 3,7, and 30 days; however, we did not evaluate middle and longterm patients’ complaints such as food residue and periodontal problems since such complications after impacted third molar surgery are rarely seen.

In conclusion, horizontal mattress suturing can be used in impacted mandibular third molar surgery to improve primary wound healing and sling suture to improve PPD and CAL. Also the results of this study are useful for not only impacted mandibular third molar surgery but also other surgical procedures in oral cavity. However, we think that further studies are needed to be done on patients who have risk of postoperative osteonecrosis of impacted third molar surgery. However, the technique of suturing does not seem to have a significant long-term effect on wound dehiscence.