Vitamin C and E Down Regulates the Expression of C-JNK, IKKB, NF-kB in Adipose Tissue of PCB-Exposed Rats

Introduction: PCBs have an adverse effect on the environment and animals. They are present in paints, coolants, rubber based products, and plastic based products, transformers, capacitors. PCBs cause endocrine disruption, inhibit reproductive functions, and can increase oxidative stress which may lead to diabetes. Aim: To analyse if Vitamin C and Vitamin E helps in down-regulation of certain markers such as NF-kB, IKKB, c-JNK. Methods: For this study, adult male wistar rats weighing between 180-200g were obtained for further study. Animals were divided into three groups (Control, Test and Treatment group). Total RNA isolation followed by conversion of RNA to cDNA with the help of reverse transcriptase and the mRNA expression level was analysed in RT-PCR. The data was analysed statistically by one-way analysis of variance (ANOVA) followed by Duncan’s multiple range test was used to see the statistical significance among the groups. The results with the p<0.05 level were considered to be statistically significant. Results: Vitamin C and E led to significant decrease in expression of C-JNK, IKKB and NF-kB in Adipose Tissue of PCB exposed rats when compared to control groups. On the mediation of IKKB and NF-kB; PCB induced group of male wistar rats showed significant increase and when treated with Vitamin C and E there was a significant decrease. Conclusion: Vitamin C and E have a prospective antioxidant and antidiabetic potential by regulating the levels of NF-kB, IKKB expression which is involved in the process of oxidative stress and inflammation.

The imbalance between free radicals and antioxidants is oxidative stress. It is produced due to diabetic conditions, possibly due to low levels of antioxidants. Oxidative stress activates the C-JNK pathway, which helps in suppression of insulin gene expression i.e. they are involved in diabetes [5].Oxidative stress leads to activation of JNK pathway [6].

Vitamin C is required in the diet of humans as a terminal enzyme in many pathways. It is involved in many functions such as iron transport [11]. Recommended diet for Vitamin C is 60mg/day. Vitamin C has both preventive and therapeutic roles in cancer, atherosclerosis, viral infections etc. [12]; it is also capable of inhibiting TNF induction of IL-8.

NF-kB or Nuclear Factor k-B is also called ‘cellular sensor’ for oxidative stress [13, 14]. In the proper NF-Kb activation pathway used by cytokine; activation occurs through IKK signalosomes which have three major components IKKA, IKKB, IKKC [21]. IKKB is an inhibitory protein that dissociates from NF-kB and is an inhibitor of NF-kB kinase. NF-kB depends on expression of proinflammatory factors. Our team has extensive knowledge and research experience that has translate into high quality publications [15-33].

The aim of the study is to find out the role of Vitamin C and E plays in down regulation of certain pathways like C-JNK, IKKB, NF-kB in adipose tissue of PCB exposed rats and also to evaluate the role of Vitamins in oxidative stress and diabetes.

At the end of treatment, animals were anesthetized with sodium thiopental (5 mg/kg, i.p), and 20 ml of normal saline was perfused through the left ventricle, to clear blood from the liver, and other organs. Visceral adipose tissue was dissected out and used for the assay of various parameters.

RT-PCR is an approach for converting and amplifying a single stranded RNA template to yield abundant double stranded DNA products. 1. First strand reaction: Complementary DNA (cDNA) is made from the mRNA template using Oligo dT, dNTPs & reverse transcriptase. 2. Second strand reaction: After the reverse transcriptase reaction is complete, standard PCR (called the “second strand reaction”) is initiated. Principle RT-PCR is a method used to amplify cDNA copies of RNA. It is the enzymatic conversion of mRNA into a single cDNA template. A specific oligodeoxynucleotide primer hybridizes to the mRNA and is then extended by an RNAdependent DNA polymerase to create a cDNA copy. First strand DNA synthesis The RT kit was purchased from Eurogentec (Seraing, Belgium). Reagents 1. 10X RT buffer: One vial containing 1.4 ml of 10X RT buffer. 2. Euro Script reverse transcriptase: One tube containing 75 µl of Moloney Murine leukaemia virus reverse transcriptase (3750 U at 50 U/µl).

The purpose of a PCR (Polymerase Chain Reaction) is to make a huge number of copies of a gene. There are three major steps in a PCR, which are as follows: Denaturation at 94°C for 3 min: During the denaturation at 94°C for 2-5 min, the double strand melts open to single stranded DNA, all enzymatic reactions stop. Annealing at 54°C-65°C for 30 sec: Ionic bonds are constantly formed and broken between primer and the single stranded template to ensure the extension process. Extension at 72°C for 30 sec: Primers that are in positions with no exact match get loose again (because of the higher temperature) and don't give an extension of the fragment. The bases (complementary to the template) are coupled to the primer on the 3' side (the polymerase adds dNTP from 5' to 3', reading the template from 3' to 5' side; bases are added complementary to the template). Because both strands are copied during PCR, there is an exponential increase of the number of copies of the gene.

Details of primers used in the present study

Procedure Real Time PCR was carried out on CFX 96 Real Time system (Bio-Rad). The reaction mix (10 µl) was prepared by adding 5 µl of 2X reaction buffer, 0.1 µl of sense and antisense primer, 1 µl of cDNA and 3.8 µl of sterile water. The thermal cycler protocol was as follows: Initial denaturation at 95°C for 3 min, followed by 40 cycles of PCR, denaturation at 95°C for 10 sec, annealing at 60°C for 20 sec and extension at 72°C for 20 sec. All reactions were performed in triplicate along with no template control (NTC). Melt curve analysis was performed using the thermal cycling programmed at 50-95°C for each sample to determine the presence of multiple amplicons, non-specific products and contaminants. The results were analysed using CFX 96 Real Time system software (Bio-Rad). As an invariant control, the present study used rat ß-actin.

The triplicate analysis results of the experiments performed on control and treated rats were expressed as mean ± SEM. Results were analysed statistically by oneway analysis of variance (ANOVA) and significant differences between the mean values were measured using Duncan's multiple range test using Graph Pad Prism version 5. The results with p<0.05 level were considered to be statistically significant.

Effect of PCB on cJNK-mRNA 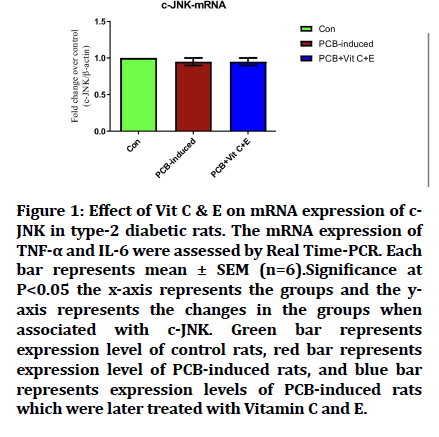 Effect of PCB on IKKB-mRNA 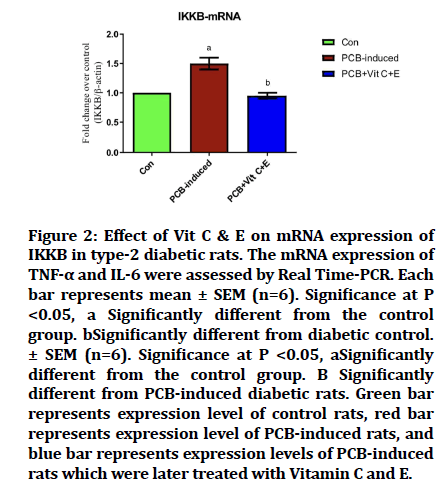 Effect of PCB on NF-kB-mRNA 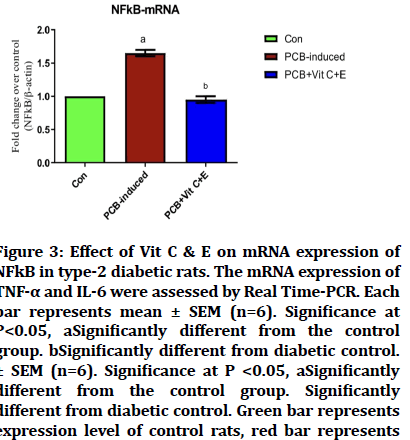 On the mediation of IKKB and NF-kB; PCB induced group of male wistar rats showed significant increase and when treated with Vitamin C and E there was a significant decrease.

Previous studies have reported that there is an association found between PCB and diabetes [34]. PCBs promote urea formation, rather than glucose synthesis [35]. PCBs also caused liver glycogen islets to disappear [36]. In this study, there was a significant decrease in level of PCB induced group on the expression of mRNA with C-JNK and no change was found when treated with Vitamin C and Vitamin E. These results were in line with the previous report in which there was a significant decrease when Vitamin C was added to the C-JNK pathway from the control group.

In this study, there was a significant decrease in the levels of PCB due to Vitamin C and Vitamin E. The previous studies only showed the correlation with Vitamin C, but in this study Vitamin E also decreased the oxidative stress. In accordance with the previous study [38], reported that PCB exposure to adult rats induces glucose/lipid metabolic disorder via the activation of HNF1b/ROS/NF-kB/IL-1 and IL-6 mediated increase in inflammation in liver and adipose tissue and down regulated the antioxidant enzymes such as glutathione peroxidase. The increased level of ROS activates NF-kB expression which in turn stimulates the proinflammatory cytokines such as IL-6 that leads to the development of metabolic disorders such as type 2 diabetes. Hence, in the present study also PCB induced group increased expression of NF-kB, c-JNK and IKKB -mRNA might be due to the increased levels of ROS as a result of decreased antioxidant enzymes such as SOD, GPX that results in activation of NF-kB, c-JUN and IKKB leads to development of diabetes. However, treatment with Vitamin C and Vitamin E were able to reduce the expression of the same to that of the control level due to its potential antioxidant properties. In supporting these findings, Williams et al (2019) reported that PCB exposed detrimental changes in insulin signalling was reversed by the supplementation of lycopene.

Exposure to PCBs can lead to type-2 diabetes by altering the proinflammatory markers which increases the insulin resistance [39]. Another study [40] stated that supplementation of Vitamin C and E prevented oxidation. SIT also inhibited obesity induced insulin resistance ameliorating the inflammatory events in the adipose tissue through the down regulation of IKKB/NF-kB and c- JNK signalling pathway [41].

According to the study, it is evident that exposure to PCB induces oxidative stress and inflammation which can give rise to various disorders like diabetes, cancer etc. Vitamin C and E could reverse the expression of inflammatory signalling molecules in PCB-induced rats. Hence, Vitamin C and E can be considered as potential drugs for the management of diabetes.

The authors would like to express their gratitude to Saveetha Dental College & Hospitals for supporting and for successful completion of this project.

All the authors declare that there was no conflict of interest in the present study.

The present study was supported by the following agencies: