Vitamin-D Deficiency and its Effect on Bone Profile: An Observational Study

Background: 25- hydroxyvitamin D (25-OHD) is an essential vitamin to be regulated in the body. It has a key function in the regulation of calcium, phosphate, and magnesium homeostasis. This study aims to explore the association between vitamin-D and bone profile.

Methods: Laboratory results including vitamin D and bone profile had been collected from 197 patients who visited the university hospital between the period of January 2013-March 2018 aging more than or equal to 10 years. Data were analyzed through SPSS.

Conclusion: No significant association was found between vitamin D deficit patients and other bone profiles.

Bone is an organ that is characterized by rigidity and hardness and has a highly specialized framework that supports the body and had the power for regeneration and repair [1]. It has the ability for remodeling throughout life and the purpose of this process is to repair micro-fraction by the consequence of the coupled reaction of (osteoclast) which is boneresorbing cells and (osteoblast) which is boneforming cells [2]. Bone also serves as a reservoir for minerals like calcium and phosphorus homeostasis and a reservoir of growth factors and cytokines [1]. For maintaining bone health, some interactions between deferent factors affect bone mineral density (BMD) like genetic, endocrine, mechanical, and nutritional factors [3]. The strategy for optimizing the peak of bone mass throughout childhood is one of the best strategies to prevent age-related osteoporosis [4].

Vitamin D plays an important role in the nurturement of bones, and a deficiency of the vitamin may end up in metabolic bone diseases leading to rickets in children or osteomalacia in adults [5]. Both vitamin D and calcium nutrients have strongly been linked with optimal building for bone mass [4]. Vitamin D is the “sunshine vitamin” which is a fat-soluble hormone that plays a principal part in calcium hemostasis and mineralization of bones [6]. Vitamin D is also distinct in its physiologic and metabolic functions [6]. Humans rely on Both endogenic syntheses which is activation through exposure to ultraviolet light that accounts for about 90% and exogenic sources (diet, primarily fortified food) [4,6]. More lately, the levels of vitamin D have been associated with bone health in adults, vitamin D level is regulated from the interaction of various factors, including intestinal absorption, renal function, serum calcium level, and parathyroid hormone (PTH) [5]. The traditional role of vitamin D includes the transformation to its active metabolite (1,25- dihydroxyvitamin D) in response to PTH, when the level of calcium is low, which results in enhancement of calcium absorption from the gut, renal calcium reabsorption, and bone resorption [4]. Sub-par serum vitamin D leads to increased serum PTH, which in turn raises bone remodeling and results in elevated risk of fractures [4]. The parathyroid gland increases its secretion of (PTH) causing hyperparathyroidism which leads to hypercalcemia [7]. Secondary hyperparathyroidism, which is a result of decreased levels of calcium, is related to poor vitamin D status [8,9]. It has been established that the association between serum 25-hydroxyvitamin D (25-OHD) and serum PTH is an inverse relationship [8]. The rise in serum PTH related to the level of 15-OHD is still a matter of debate [10–12]. Reports indicate that not all who have poor vitamin D status have a high level of PTH [13].

The main aim is to reach a conclusion regarding the relationship between vitamin D and bone profile. This first can be done by gaining access to the 197 patient’s files to record the necessary results then running those through a statistical program to reach our conclusion.

This observational study was conducted on 197 patients who visited the university hospital from January of 2013 until March of 2018, aging more than or equal to 10 years. The sample size was calculated through SurveyMonkey.com. Laboratory results regarding 25- hydroxyvitamin D (25-OHD) and bone profile “PTH, ALP, Calcium and, Phosphate” were selected for correlation to a low than normal vitamin D levels. The data were analyzed through a statistical package for the social sciences (SPSS). Inclusion criteria: all patients aging more than or equal to 10 years who visited the university hospital and had the appropriate laboratory results. Exclusion criteria: patients aging less than 10 years.

In this study, we aimed to study the correlation between vitamin D and bone profile levels. This study was conducted on 197 patients who attended the university hospital from January of 2013 until March of 2018. Table 1 displays full demographics. 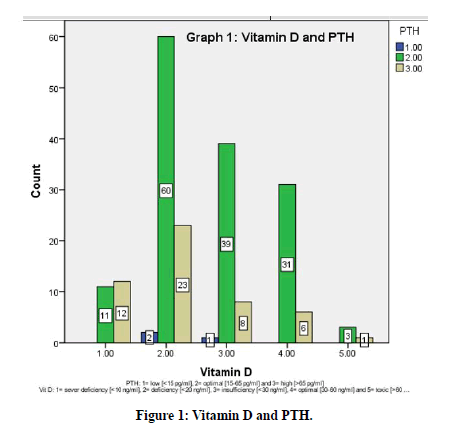 In this study, the main aim was to investigate the relationship between vitamin D reduction below the normal and bone profile levels. Serum PTH had not shown a significant alteration to decreased 25-hydroxyvitamin D (25-OHD). Previous studies disagreed and displayed a negative association [14,15]. However, one study had described similar results [16]. Serum ALP, calcium, and phosphate were not increased nor decreased in relation to vitamin D deficient subjects. This same association was reached in past studies [17,18].

There was no significant change in serum PTH, ALP, calcium, and phosphate in relation to low vitamin D levels. In our study bone profile markers were unreliable to aid in the diagnosis of vitamin D deficiency, so clinicians must maintain high suspicion and treat vitamin D deficiency promptly to avoid unwanted complications.

The nature of our study is an important limitation as is the time limit of approximately 16 weeks.

This publication was supported by the Deanship of scientific research at Prince Sattam bin Abdul Aziz University, Al-Kharj, Saudi Arabia.

The research was conducted by the author and mentioned students.

This research received no external funding.

The authors declare that they have no conflict of interest.

All procedures performed in studies involving human participants were in accordance with the ethical standards of the institutional and/or national research committee and with the 1964 Helsinki declaration and its later amendments or comparable ethical standards (ethical approval number: (REC-HSD-004-2020).

All data associated with this study are present in the paper.