Yet another Proof on Promising Molecular Diagnosis Technique, Amniocentesis, a Bliss in Gestational Care

Introduction: The prospect of every pregnant mom is to have a new-born who is both physically and mentally hale and healthy. It is the burden of the medical fraternity to ensure the parents to build a promising future generation. Even though the awareness and knowledge about gestation care has been increasing, but with expanding environmental pollution, lifestyle changes and stress of various origin we encounter escalating cases of infertility, genetic abnormalities in foetus and gestation related complications. At the same time with evolutionary inventions in medical science, diagnosing and managing these conditions, are at ease and we can handle the situation better than before.

Materials and Methods: This is an observational study of a patient during the gestational tenure, until the fruitful result. The lady conceptus was evaluated periodically through different molecular screening.

Results: In this brief report, we will see how amniocentesis has played a vital role in completing the journey of gestation fruitfully and effectively. This brief report is about a patient with vanishing twin syndrome presumed to have a fetus with genetic abnormality.

Conclusion: Yet another proof of medical invention’s bliss is showcased here.

Amniocentesis is a procedure done in the second trimester between 14-16 weeks, where a sample of amniotic fluid will be obtained from the amniotic sac surrounding the fetus and cultured to retrieve genetic information [1]. Not all the pregnant mothers are subjected to amniocentesis. As it is a high-risk procedure, it is opted only in case of high-risk pregnancies such as elderly pregnancy, previous history of genetically abnormal child, Bad obstetric history, and other circumstances like a doubtful ultrasonographic reports suspected of a serious structural abnormality, unfavourable reports of non-invasive prenatal testing reports [2].

Genetic amniocentesis remains the most reliable, confirmatory technique to retrieve the genetic information of the foetus till date. It is an invasive procedure where we detect the chromosomal aberrations by QF-PCR and karyotyping. The technique manages to diagnose numerous genetic and metabolic syndromes. Thus, foetal karyotyping is a guidance to plan further obstetric management of current pregnancy and future pregnancies testing reports [3].

A 29-year-old female K/C/O Polycystic ovarian syndrome married in the last 2 years unable to conceive by natural method. After 11/2 years of treatment for infertility, she conceived with Ovulation Induction therapy.

•No evidence of Tricuspid regurgitation

Due to the persistent presence of unossified nasal bone in the Ultrasonography, parents were given genetic counselling, followed which they decided to go for Amniocentesis.

The amniocentesis was performed at the end of 16 weeks of gestation.

•No other significant finding

•No evidence of Tricuspid regurgitation

The procedure was performed at the end of 16 weeks of gestation.

•No evidence of genetic/metabolic abnormality.

•No other significant finding.

After such extensive analysis of the foetus and ruling out the maximum possibilities of genetic and metabolic abnormality in the foetus with limitations being explained, the mother was allowed to continue pregnancy.

Finally, she delivered a healthy, term, female baby weighing 2.5 kg with no malformations.

Ultrasound imaging is a very basic, routine antenatal screening investigation to ensure the developmental milestones of the foetus are appropriate for the gestational age (Figure 1). 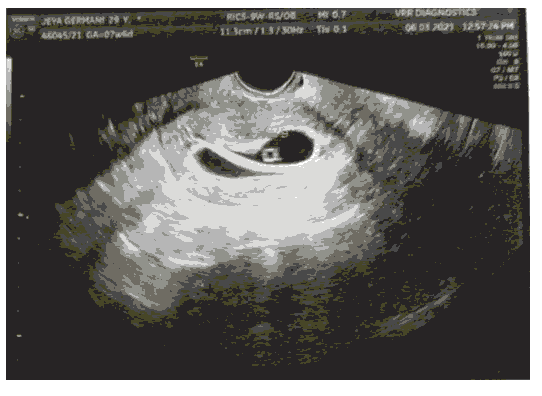 The accuracy of this screening method is approximately 92%. And therefore, sonography plays a pivotal role in detecting pathological pregnancies which determines the outcome of pregnancies (Table 1) [4].

The basic sonographic screening schedule for an antenatal woman is as follows dating scan within 8 weeks of pregnancy to look for number and location of the gestational sac, due date and foetal heart rate. subsequent scans include Nuchal translucency sac on at 10-14 weeks for Downs syndrome (Figure 2), Anomaly scan at 18-22 weeks for any major structural abnormality and at 30-34 weeks is the growth scan for nutritional status of the foetus, placentation, mode of delivery [5]. 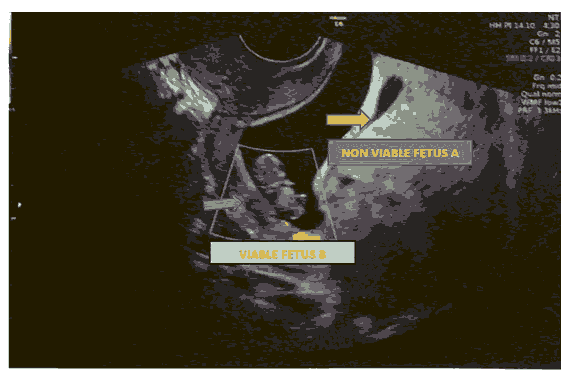 All the above screening is considered mandatory. When we come across a major structural abnormality amid second trimester screening, invasive procedure like Chorionic Villi Sampling (CVS) or amniocentesis will be recommended to confirm the diagnosis and plan further management [6].

Though amniocentesis and CVS are considered a hallmark diagnostic tool of genetic disorders in the fetus, they carry numerous risk elements such as miscarriage, maternal death due infection and fetal infection [7]. This has led to a new screening method called NON-INVASIVE PRENATAL TESTING (NIPT) that involves screening of maternal serum for in the early second trimester to look for possibility of cytogenetic abnormalities in the foetus. This advanced maternal screening system has helped in more judicious use of invasive techniques [8].

The Non-invasive prenatal testing detects the cell free foetal DNA (cff-DNA) in the maternal plasma. Patients who reveal an abnormal NIPT reports will be subjected to confirmatory test like amniocentesis or chorio villous sampling [9].

The practice of Non-invasive prenatal testing helps to detect the cytogenetic abnormalities very much earlier than the invasive procedures, but the disadvantage is that it has not replaced the efficacy and accuracy of amniocentesis or CVS [10].

Twin gestation: The risk of structural abnormalities and aneuploidy is more with twin gestations when compared with singleton pregnancies (Figure 3). Hence an intensive care to be given in both maternal and foetal screening. As invasive prenatal techniques are associated with high risk of pregnancy loss, prenatal non-invasive test, Fetal echo etc. can be carried out to avoid unnecessary intervention [11]. 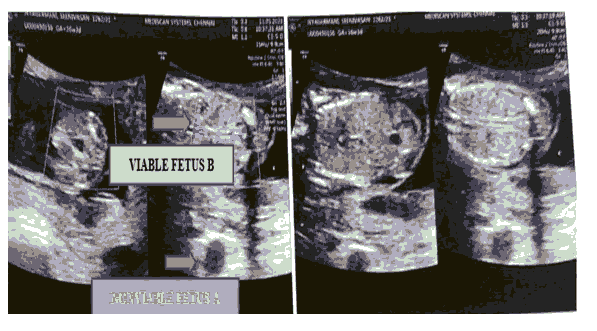 Vanishing twin syndrome a tight spot: The vanishing twin phenomenon is a process where there is disappearance of the gestational sac or embryo after an official documentation of multiple pregnancies. To confirm the above condition patient should be on proper clinical follow up and imaging [12].

The vanishing twin phenomenon is associated with elevated levels of Cff-DNA and thereby misleads the NIPT with false positive results. Therefore, before concluding the NIPT results should be correlated with history of the patient, clinical presentation and sonographic finding to avoid unnecessary intervention [13].

The main disadvantage of NIPT is, it is expensive and not the confirmatory test. Following NIPT results patient waits for a long time for about 2-3 weeks with a lot of mental anxiety for the invasive procedure to be performed. Hence alternative confirmatory methods should be discovered to replace amniocentesis and CVS to avoid unnecessary invasion and alleviate the apprehension of the parents.

The two key elements of amniocentesis are Quantitative Fluorescent Polymerase Chain Reaction (QF-PCR) and conventional karyotyping (Figures 4 and 5). The former (QF-PCR) is a rapid cost-effective analysis method specifically detect the common aneuploidies Trisomy 13,18,21 which is the major concern for the investigator and the parents as well. The latter Karyotyping for other genetic and metabolic abnormalities [14]. 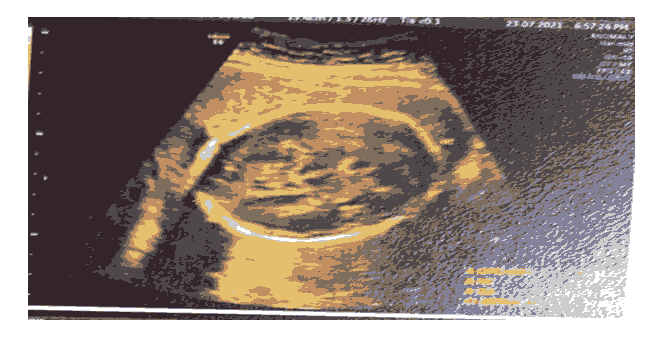 Molecular diagnosis techniques, although many criticize about the frequency and financial burden on the parents to follow these as and when suggested by the obstetrician, this brief report is yet another proof of the preeminent investigations in gestational care. Parents though very much alarmed of the explanation about the procedure and hesitancy in giving the consent, once done, the rest of the period of gestation will be delightful and fascinating.

A person finding joy in a fruitful pregnancy might have done some investigations as a back bone that too in due season. How good is a timey investigation?

Authors wish to convey their gratitude to the mother and this great institution for rendering affordable services to the patient.