A Clinical Study of Conduction Block in Acute Myocardial Infarction

Objective: Acute myocardial infarction is a major health problem in both developing and developed countries, remaining as a leading cause of morbidity and mortatility. It can occurs at any level of the conduction system i.e. atrioventricular or interventricular. It may be transient or permanent.

Materials and Methods: 100 patients admitted in cardiac intensive care unit of sree balaji medical college and hospitals with the evidence of acute myocardial infarction are be studied. Results: 11% of the study populations developed heart failure whereas 89% were without evidence of heart failure. 19% of the study populations developed conduction blocks. In this 19% ,7 cases were first degree AV block, 4 cases of second degree AV block, 3 cases of complete heart block, 2 cases of left anterior hemi block, 2 cases of RBBB and one case of LBBB.

Acute myocardial infarction is a global epidemic and a major public problem due its leading cause of mortality and morbidity [1]. Myocardial infarction is usually resulting from an imbalance in oxygen supply and demand, which is often caused by plaque rupture with thrombus formation in an epicardial coronary artery which results in an acute reduction of supply to a portion of myocardium. Incidence of Acute MI is increasing nowadays with a male predominance when compared to females. In our country smoking is a common risk factor for the development of acute MI, now hypertension and diabetes, are also contributing as a major risk factor. The increased prevalence of stress and unhealthy lifestyle with earlier development of diabetes mellitus leads to the common cause of acute MI in the younger age groups [2,3]. Myocardial Infarction is considered as a part of a spectrum referred to as Acute Coronary Syndrome (ACS). The ACS continuum representing myocardial ischaemia or injury consists of Unstable Angina (USA), Non-ST Elevation MI (NSTEMI), ST Elevation MI (STEMI) [1]. Acute Myocardial Infarction is characterized by generalized autonomic dysfunction that results in enhanced automaticity of the myocardium and conduction system. Electrolyte imbalance and ongoing ischaemia which results in hypoxia of the conduction system further contribute to the development of conduction blocks and cardiac arrhythmias.

Various types of conduction blocks develop following an acute MI. Heart Blocks such as atrioventricular and interventricular blocks are among the most important electrical disturbances which occur following acute myocardial infarction. Delayed conduction may occur because of physiological phenomenon i.e increased vagal tone or pathological process with varying incidence rates in different populations.

The damaged myocardium results changes in tissue refractoriness. Enhanced efferent sympathetic activity, increased concentrations of circulating catecholamines and local release of catecholamines from nerve endings in the heart muscles results in development of various conduction block and development of arrhythmias [4,5].

The presence of conduction defects complicating acute MI is relatively frequent and it is associated with increased short term mortality rates. Bundle branch blocks in AMI caries poor prognosis. This is attributed both to the extent of myocardial damage and to the frequency of ventricular asystole. Development of conduction blocks worsens the outcome of AMI [6]. Thrombolytic therapy and early perfusion of the myocardium by PCI has been established to reduce the mortality in AMI. The incidence of high degree AV blocks has been reported to be as high as 20% in several studies with an association with increased shortterm mortality. The prognostic significance and management of these disturbances may vary with the location of the infarction, type of conduction blocks, associated clinical features and the hemodynamic compromise [7,8].

100 patients admitted with acute myocardial infarction within 7 days of index event in Sree Balaji Medical College and Hospital CCU from February 2015 to September 2016.

Diagnosis of conduction blocks based on ECG.

Patients on drugs, which may cause conduction defects like beta blockers, digoxin, calcium channel blockers.

After ethical clearance, permissions were obtained from Head of the department of General medicine and Cardiology, respectively. After satisfying the exclusion criteria, inclusion criteria and informed consent, the structured proforma filled with respective data were collected.

Hundred’s patients admitted in Sree Balaji Medical College and Hospital CCU with the diagnosis of Acute MI are to be studied. All of them need electrocardiographic evidence of infarction in case of STEMI. They also need clinical features with ECG evidence of infarction and positive cardiac troponin I or T at any time during the index admission in case of NSTEMI. The diagnosis was established by the presence of typical angina pain lasting at least 30 minutes, ST segment elevation or depression >1 mm in two or more consecutive leads, and an increase in CKMB of double the normal values (190 U/L).

Distribution according to age and gender

Table 1: Distribution according to age. Figure 1. Distribution according to gender.

Distribution according to comorbidities

Table 2: Distribution according to comorbidities. Figure 2. Distribution according to multiple comorbidities.

Distribution according to valvular heart disease

Distribution According to cardiac markers 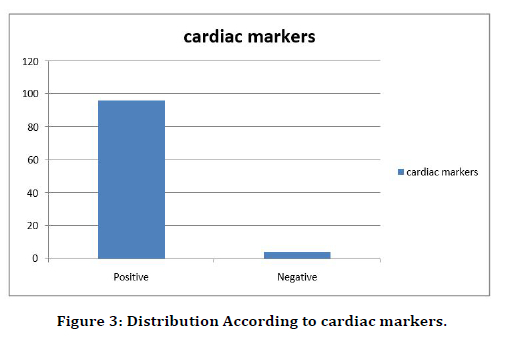 Figure 3. Distribution According to cardiac markers. Risk factors such as hypertension were present in 18% of cases, diabetes in 25% of the cases, smoking in 29% of the cases. A similar finding was observed in Charvda et al. where smoking is the most common risk factors followed by diabetes mellitus. The prevalence of DM and HTN in the study by Hrey et al. was 22.3% and 20.2% respectively. While comparing the risk factors between males and females, smoking, hypertension, diabetes, dyslipidemaia are where common in males and diabetes and dyslipidemia were common in females [12]. In our study, Inferior Wall MI is the most common site of MI followed by AWMI. This finding was supported by Hrey be and Saba and shah et al. In our study, out of 100 patients with MI,19% had conduction block. Out of this 19% 14% were developed AV block and 5% developed Interventricular block. Out of this 14% with AV block,7% developed first degree AV block and 4% developed 2nd degree AV block and 3% cases developed complete heart block. Out of this 5% with Interventricular block 2 cases of RBBB and 2 cases of LAHB and 1 case of LBBB were seen. Similar findings were seen in Bhalli et al. Archbold et al. and Shirafkan et al. [6,10,13,14]. Male’s patients with AMI developed more conduction blocks than the females with AMI in this study and this was supported by Escosteguy et al study. In our Atrioventricular blocks are more common in Acute IWMI and Interventricular blocks are more common in Acute AWMI and this association was statistically significant (p<0.001) and consistent with an earlier study.

Our study data and results in this respect very closely like the findings of Escosteguy et al. who studied 929 cases of AMI in Brazil and found significant association of AV Blocks and BBB with inferior and anterior wall MI respectively.[15] In patients with AWMI our findings in relation interventricular blocks are also compatible with other studies. Interventricular blocks are common in AWMI then IWMI and in patients with IWMI AV Blocks are more common than in AWMI. First degree AVB is more common in isolated IWMI and with RVMI whereas 3 rd degree AVB is more common in IWMI combined with RVMI.