Diabetes Mellitus (DM) commonly referred as a Diabetes; a clinical syndrome characterized by an increase in blood glucose concentration (hyperglycaemia). The symptom of hyperglycaemia includes polyuria, polydipsia, polyphagia, weight loss, tiredness, and blurred vision. Diabetes Mellitus associated with microvascular (retinopathy, nephropathy, and neuropathy, that can either be peripheral neuropathy (i.e., sensory loss, pain, motor weakness) or autonomic neuropathy) and macrovascular (coronary artery disease (CAD), peripheral arterial disease (PAD) and cerebrovascular disease (CVD)) complications. These complications are the major cause for increase rate of morbidity, mortality and decrease quality of life Platelet plays an essential function in normal haemostasis which serves to maintain the integrity of the vasculature upon injury. To study the platelet indices in controlled, uncontrolled Diabetic Mellitus and Hypertensive subjects and to compare it with normal subjects.

Platelet plays an essential function in normal haemostasis which serves to maintain the integrity of the vasculature upon injury. The functions of platelets include the process of inflammation, innate immunity, angiogenesis, growth, and developments, wound healing and cancer metastasis [1-4]. The normal range of platelet count is 1,50,000 to 3,00,000 lakh / microliter [5]. Platelet Indices include the parameter such as mean platelet volume, platelet distribution width, platelets. The mean platelet volume is an index of the average size of platelet in blood. It can also use as a marker for size distribution of platelets and assessing the platelet function and activation [6]. MPV is associated to increase in platelet aggregation, increase in release of adhesion molecules, and increase risk of cardiovascular and peripheral arterial diseases [7]. An increased MPV indicates increased production of platelets resulting in higher tendency to clot. Low MPV indicate decreased production of platelet and associated with bleeding [8].

Platelet distribution width (PDW) reflect about how uniform the size of platelet. PDW is a simple, and specific marker of platelet activation. An increase in PDW is indicator for platelet anisocytosis. Platelet activation causes formation of pseudopodia resulting in increased PDW. Platelets (PCT) is measure of total platelet mass. PCT is related to the platelet count and size of the platelets. It is the most effective screening tool for detecting the quantitative abnormalities of platelet. Platelet size is considered as a marker and determinant of platelets function. Elevated platelet size (mean platelet volume) is more reactive and produces more prothrombotic factors. MPV is associated with an increase of platelet aggregation, increase in release of adhesion molecules, and increase risk of cardiovascular and peripheral arterial diseases [7].

Increase platelet size alters the morphology of platelet. Larger platelet is most reactive, easily aggregable. It contains a greater number of dense granules that release the adhesion molecules. MPV and PDW shows the reflection in the variation of size in the circulating platelets. PDW and PCT is also important in atherosclerosis and thrombosis [8-10]. Automated blood cell analysers in the laboratories were not only used to determine complete blood count and platelet count. The indices related to platelet count such as mean platelet volume, platelet distribution width and platelets are also estimated. Diabetes Mellitus (DM) commonly referred as a Diabetes; a clinical syndrome characterised by an increase in blood glucose concentration (hyperglycaemia). The symptom of hyperglycaemia includes polyuria, polydipsia, polyphagia, weight loss, tiredness, and blurred vision. Diabetes Mellitus associated with microvascular (retinopathy, nephropathy, and neuropathy, that can either be peripheral neuropathy (i.e., sensory loss, pain, motor weakness) or autonomic neuropathy) and macrovascular (coronary artery disease (CAD), peripheral arterial disease (PAD) and cerebrovascular disease (CVD)) complications. These complications are the major cause for increase rate of morbidity, mortality and decrease quality of life [11].

Both male and female gender.

All known cases and newly diagnosed Type 1 and 2 Diabetes Mellitus and Hypertension (Patients having blood pressure ≥ 140/90 mmHg) were selected. The subject on oral hypoglycaemic drugs and antihypertensive treatment were included. Healthy volunteers with no medical illness (control group).

Subjects suffering from following history or disease are excluded from the study.

The subjects were instructed to provide their blood sample after an overnight fasting for about 10 to 12 hours. 7ml of blood is collected in the plain, EDTA tubes by venepuncture of median cubital vein using a sterile disposable syringe after following the precaution measures. The collected blood samples were labelled with subjects age, sex, and identification number. According to manufacturer instructions, standardisation, calibration of the instruments the processing of samples was done.

Fasting Blood Sugar and Post-Prandial Blood Sugar analysed by the GOD-POD (Glucose Oxidase–Peroxidase) method and Glycosylated Haemoglobin (HbA1c) are assessed by turbidimetric method–direct method. The platelet count is determined through both impedance technology and an optical method.

Platelets (PCT) is the ratio of platelet volume in relation to blood volume.

Platelet Distribution Width (PDW) is the uniform the size of the platelet.

A total of 300 subjects (100 subjects with Diabetes Mellitus (DM), 100 with Hypertension and 100 healthy controls) enrolled for this study.

Table 1 shows the mean and standard deviation values of Age, BMI and duration in controlled, uncontrolled DM subjects and independent sample t-test values and its significance. 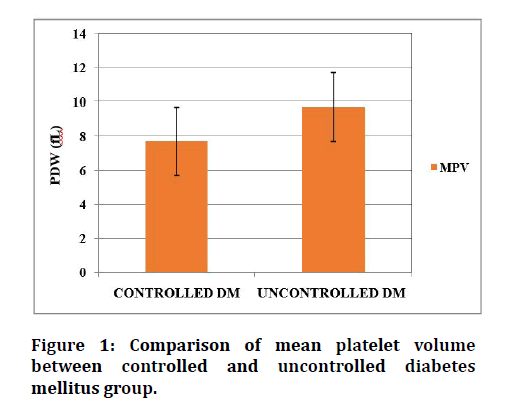 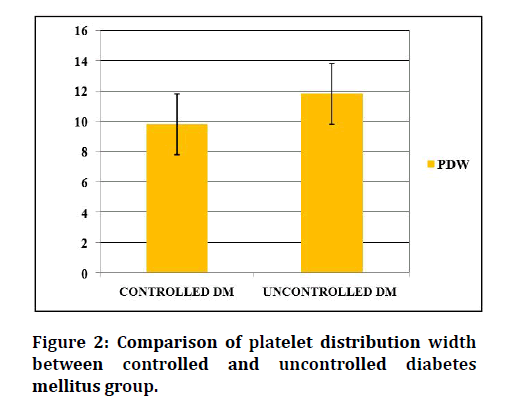 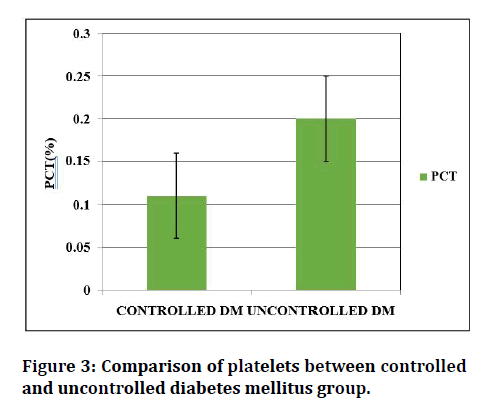 Table 4 and Figures 4 to 6 shows the comparison of the platelet indices between the Diabetic group and control group. The mean platelet volume of Diabetes is 8.69 ± 1.43fL, as compared to 7.44 ± 0.68fL of the control group. The mean value of PDW in Diabetes Mellitus is 11.7 ± 1.28fL and 10.92 ± 1.17fL in non–Diabetic subjects. MPV and PDW shows statistical significance. The platelets were not significant between Diabetic and control group. Among the 100 Hypertension patients, there were 45 males and 55 female Hypertension subjects in the study. The hypertension group was divided into controlled HTN and uncontrolled HTN. In controlled group of 50 hypertensive patients, 24 subjects were males, and 26 subjects were females. Whereas in uncontrolled group, 21 subjects were males, and 29 subjects were females. 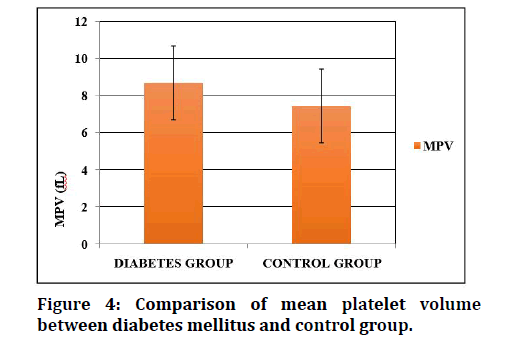 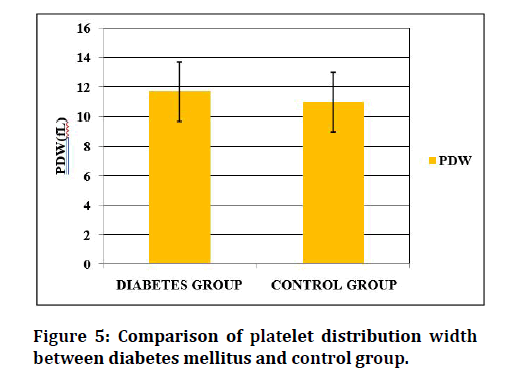 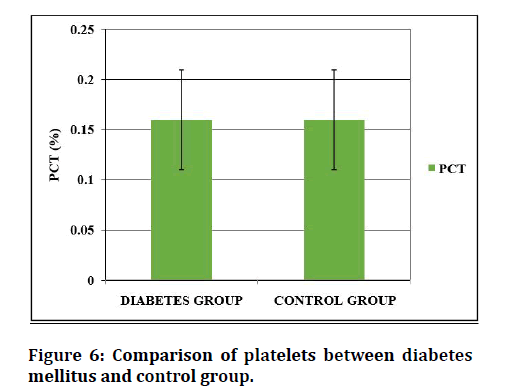 Figure 6: Comparison of platelets between diabetes mellitus and control group. 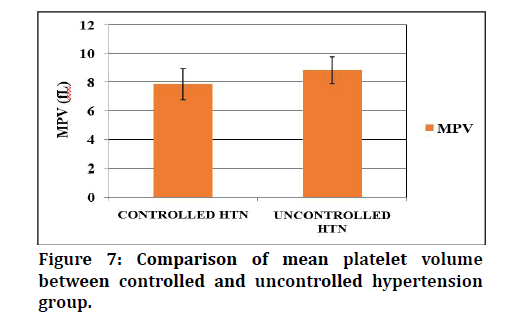 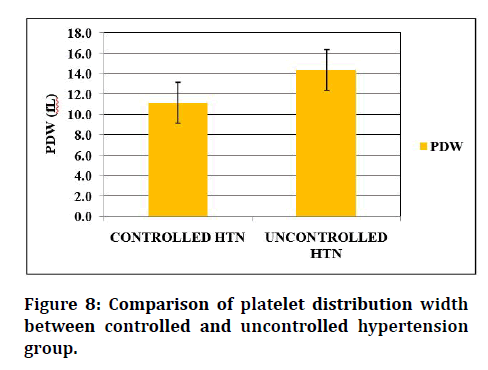 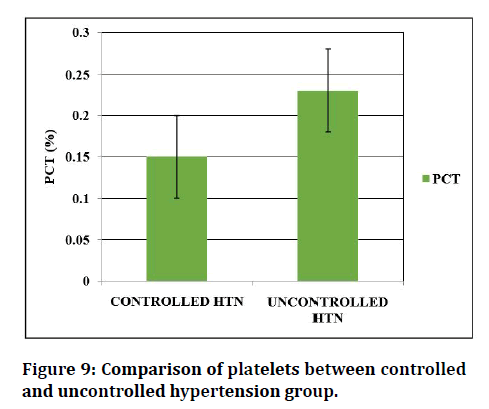 Figure 9: Comparison of platelets between controlled and uncontrolled hypertension group. 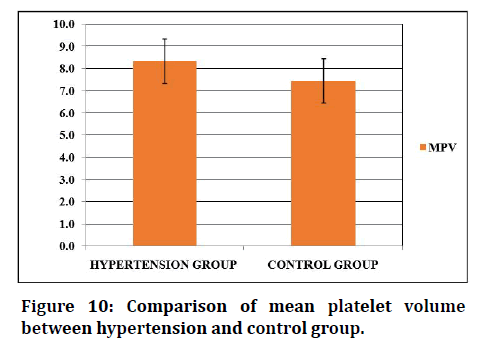 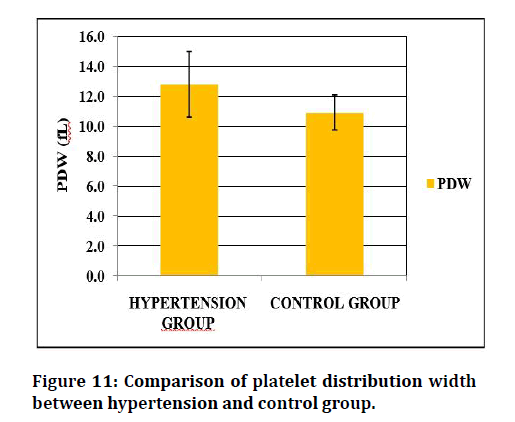 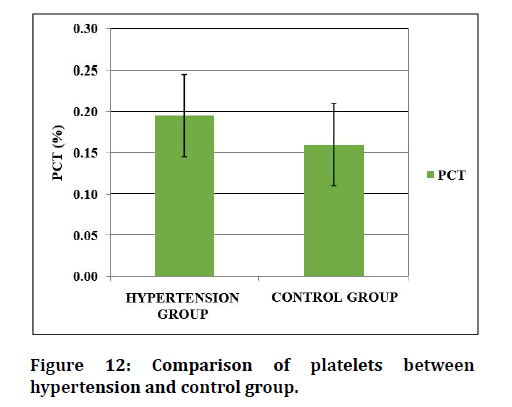 Figure 12: Comparison of platelets between hypertension and control group.

The average MPV value is 8.69 ± 1.43 fL in Diabetic group, and 7.44 ± 0.68 fL in non - Diabetic (normal) group. MPV is significantly high in my study. The results of our study were similar previous studies. MPV is an indicator of average platelet size and its function. Platelets become hyperreactive in Diabetes subjects that causes increase in activation, adhesion, and aggregation. Studies reported that larger platelets are younger, more active, and more adhesive than small ones. They contain dense granules that secretes the prothrombotic factors such as serotonin, β-thromboglobulin, platelet factor 4, and platelet-derived growth factor, that produces more thromboxane A2 and possess greater aggregability in response to ADP. Jones et al. [32] study reported that association of increased platelet volume and reduced platelet survival in Diabetic subjects. Therefore, larger platelets circulating in blood are mainly by increase in MPV, that predispose to thrombotic vascular complication in Diabetes patients.

In our study we compared the platelet indices parameters between 50 controlled Diabetic and 50 uncontrolled Diabetic patients. Table 3 shows that all platelet indices parameters were increased in uncontrolled Diabetic patients when compared to the controlled Diabetic patients. This finding was like previous studies. The platelet indices were statistically significant between the two Diabetic group. A high MPV is an important predictor for an increased risk for thrombosis and complications. Several mechanisms has been proposed for an increased platelet activity in Diabetes due to hyperglycaemia. The membrane proteins of platelet undergo a non–enzymatic glycation that reduces membrane fluidity and increase the platelet adhesion. An increase in calcium mobilisation from the storage pools and high level of intracellular calcium has been reported in Diabetes Mellitus patients. Intracellular free calcium is correlated. with the reduction membrane fluidity. Platelet activation was mediated by the protein kinase C activation. Furthermore, due to hyperglycemia, osmotic swelling occurs that increase the platelet reactivity by glucose metabolites.

Platelet distribution width level in our study was increased in Diabetes group when compared to non– Diabetic group. PDW is also significantly increased with poor glycaemic control. Our findings were reported as similar as previous study. Platelet activation causes changes in the morphology and pseudopodia formation. This difference in size and shape (discoid to spherical) leads to change in platelet distribution width. In our study, platelets (PCT) was found higher in the uncontrolled Diabetic group (0.20 ± 0.05%) that the controlled Diabetic group (0.11 ± 0.005%). There was a statistically significant (p<0.0001) in between two Diabetic group. Platelets is higher in Diabetic groups and the normal group. Since the larger platelets are more reactive in Diabetic subjects, the platelet mass increases, thereby PCT increases. Swaminathan et al study, found that PCT is high in the type 2 Diabetes Mellitus subjects. In khan et al study, PCT was higher in patients with hyperglycaemia than the normoglycemia.

Normally, platelets are derived from megakaryocytes, the newly produced platelets are not large and dense. Increased platelet reactivity leads to shortening of bleeding time and increased platelet volume. The elevation in the blood pressure levels causes changes in the vascular endothelium and platelets. The platelet become larger, metabolically, and enzymatically more active and produces more thromboxaneA2 and B2, which increases the thrombotic activity. Even the uncontrolled blood pressure causes damage via the shear stress, that activates the platelet and thereby increases the MPV.

Like our study results, increase in MPV is seen in earlier studies. A previous study found that MPV was increased in essential hypertensive and white coat hypertensive subjects than in normotensive group. Another study says that MPV is high in non-dipping hypertensive individuals than in dipping hypertensive individuals. This increase in MPV level in HTN subjects might increase the inflammation, target organ damage and other complications. The platelet distribution width is higher in uncontrolled hypertensive group than the controlled hypertensive group. As the PDW can measure the variability in platelet size and reflect the heterogeneity in their morphology, the activated platelets cause changes in morphology as well the shape from discoid to spherical and pseudopodia formation. Increase in PDW was found in studies.