Anatomical Abnormalities Caused by Induced Infections in Femur and Tibia of Rattus Norvegicus and the Efficacy of Marine-Derived Antimicrobial Peptides (AMPS) in Treatment
All submissions of the EM system will be redirected to Online Manuscript Submission System. Authors are requested to submit articles directly to Online Manuscript Submission System of respective journal.

This study aimed to assess the impact of gill extraction of antimicrobial peptides which are derived from the marine organism Perna Viridis against anatomical abnormalities.

Those have been developed due to induced bacterial infection in the tibia and femur of Rattus norvegicus. Such infections are maintained for three weeks.

Methods and Results: Experimental infection was induced in 2 Albino rats. A 109CFU/ml suspension of Staphylococcus aureus and streptococcus pyogenes was injected into the tibia and femur of the experimental rat. On observation of two rats, the clinical symptoms like inflammation, tumours, and histopathological changes. Among histopathological changes mostly inflammatory cells like monocytes, T-lymphocytes, neutrophils were observed more than basophils over the tissue in "Staphylococcus aureus (S.A.)" and "streptococcus pyogenes (S.P.)" infected rat after post-inoculation of infection. Antimicrobial peptides were utilized to treat these anatomical abnormalities. The Culture sensitivity test was done. There was no minimal inhibition concentration observed.

Conclusion: Antimicrobial peptides have been demonstrated to kill both gram-negative bacteria and gram-positive bacteria and enveloped. After induction of both bacterial strains into experimental rats, anatomical abnormalities were observed. However, antimicrobial peptides were not shown any efficacy against both bacterial strains.

Antimicrobial peptides (AMPs) are short amino acid chain molecules involved in the first line of defence against invading pathogens in Marine invertebrates. AMPs are synthesized by the ribosomal machinery as pro-peptides, consisting of an N-terminal signal sequence, a pro sequence, and a C-terminal sequence with antimicrobial activity [1,2]. AMPs are the universal immune effectors. AMP's are derived from the marine organisms which are possessing anti-viral, antibiotic, anti-parasitic, anti-viral and anticancer activities [3-5].

Among the marine organisms, Marine invertebrates are utilized like (sponges, sea hares, sea slugs, Mollusca, and other marine organisms) which constitute with innate immunity mechanism [6]. Around the world, 80% of marine organisms are present which are used as medicines, insecticides, pigments, food, etc. [7]. There are thousands of bioactive compounds present in marine organisms [8,9].

AMPs are the class of antibiotic that is a part of the innate immune system in the organisms. This broad spectrum of antimicrobial activities against various microorganisms likes negatively charged also positively charged bacteria, fungi, viruses [10-12]. AMP's acting on the membrane of the bacteria create a negative charge over the bacterial membrane, inhibit the cell wall synthesis that leads to bacterial death. AMP's shows effects against several bacterial strains like Staphylococcus aureus, Salmonellatypi, Kelbsiellaoxytoca, K.pneumoniae, Pseudomonas aeruginosa, Escherichia coli, Proteus mirabilis, and lactobacillus Vulgaris [13-17].

In our study, we extracted antimicrobial peptides from the Perna Viridis (Green mussel). It was first reported on the west coast of Trinidad in 1990 in Lisa Industrial estate. Pernaviridis belongs to the phylum Mollusca the Asian Green Mussel (Perna Viridis) is a bivalve that belongs to the family Mytilidae [18]. Mollusca was found to be a rich source of protein, and chemotherapeutic agents were also developed from them [19,20]. These antimicrobial peptides are derived from body parts of a marine organism like a shell, mantle, and digestive system and also from gills. In our study, gill extraction of antimicrobial peptides was utilized against anatomical abnormalities which are caused due to induced infections like Staphylococcus aureus and Streptococcus pyogenes. This study aimed to describe the efficacy of antimicrobial peptides against staphylococcus aureus and streptococcus pyrogens, causing anatomical abnormalities in the tibia and femur of the rat (Figures 1A-1C). Figure 1A. Anatomical view of Mollusca. In our study, we have extracted the marinederived antimicrobial peptides from the bivalve's respiratory organs. Live specimens of bivalves were collected from the seashore of the south coast of India. Those bivalves are washed with distilled water and stored at -80°C until the gill tissue isolation. While using the gill region of Mollusca was collected directly by using a fine scissor. Then the sample was rinsed with sterile water to remove associated debris. The bioactive compounds are extracted in distilled water/methanol from that extraction from Perna Viridis was utilized. Then homogenate the suspension using a mortar and pestle cooled with liquid Nitrogen. The suspension was centrifuged by rotation at 15000 rpm for 45 min. the supernatant was collected and stored at -800 C [1,6,21].

The efficacy of antimicrobial peptides was determined against two bacterial strains, i.e., Staphylococcus aureus (ATCC#25923) streptococcus pyrogens (AATCC#19615). Both strains were charactered by molecular analysis (pulse-field gel electrophoresis) from an overnight culture in 9ml tryptic soy agar plates (TSB), and aliquots of 100μl were transferred into two sterile test tubes containing 3ml of TSB. These two test tubes were incubated for 3hrs at 37°C to get a log-phase growth. After incubation tubes were centrifuged for 10 min at 1000rpm, the supernatant was detected, and the remaining culture was rinsed with phosphate buffer saline twice. The bacterial sediment was serially diluted with phosphate buffer saline to get a suitable suspension to contain 109 CFU/ ml under spectroscopic analysis. The standard bacterial solutions were injected into the host tibia and femur region by using a direct needle process. This growing infective host tissue was converted into a standard infective tissue sample [22] (Figure 2). 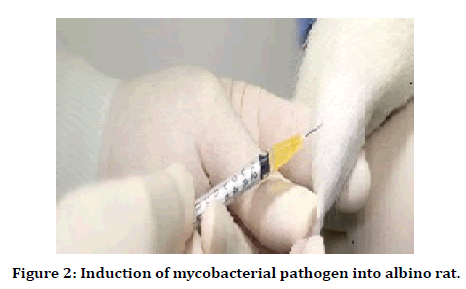 The suspension was injected into two healthy rats of femur and tibia by separation of each bacterial strain. The name of the first rat was indicated "S.A." which was injected by the bacterial strain Staphylococcus aureus and the other was indicated "S.P." injected by bacterial strain was streptococcus pyogenes in dilution factor 109CFU/ml qualifying is 2cc (1cc=1ml) into tibia and femur of rats. Then the rats were observed for three weeks continuously for clinical symptoms like inflammation and tumour over the limbs after induction of infections of both bacterial strains. After 3 weeks, the rats were killed, and the bone tissues were collected and stored at -80 0celsius.

After the stored tissue (supernatant) mixed with saline by serial dilution process were spread on the nutrient agar plate, which is inoculated with a standardized inoculum of test microorganism using aseptic technique. Place the agar plate on the bench, allow 20-30 minutes for the agar to solidify. Then, filter paper discs (about 5 mm in diameter), containing AMPs (Test compound) at the desired concentration, placed on the agar media. Then Petri dishes were incubated for 48 hr at 37°C under aerobic conditions [23]. After 48hrs. The bacterial count for each infective bacteria tissue inoculated agar Petri dish was observed. Then the minimal inhibition concentration (MIC) was observed and measures in centimetre (mm) from the center of the labelling paper disc to the initiation border of the microbial culture area.

It was observed that the duration of two weeks the site of infection-induced shown complete morphological changes were increasing inflammation, redness among infection site. Anatomically, the muscle tissue of the rats observed was covered entirely with inflammatory spasm. The tissue of the muscle was necrotized. The wound over the lower limbs was completely infected and lost its density having more spasms due to the infection of staphylococcus aureus and streptococcus pyrogens rat. That a condition leads to that rat could not able to move the lower limbs indicates that painfulness over lower limbs. After the 2nd week in the 3rd week, we observed small wounds over the infected site of both the rats of staphylococcus aureus and i that wound continuously increased the size at the end of the 3rd week. The wounds were enlarged 4mm in size of S.A. rat and 2.5mm in S.P. rat (Figure 3A).

Figure 3A. Morphological and Anatomical changes in Limbs both staphylococcus aureus and Streptococcus Pyrogens. Table 1: Morphological changes on the tibia, femur of S.A., and S.P. rats.

In this study, the Perna Viridis gill extraction peptides were cannot shows any efficacy against Staphylococcus aureus and Streptococcus pyrogens bacteria of experimental Rat tibia and femur infective tissue extraction. There was no Minimal inhibition concentration (MIC) in the cultured growth of Staphylococcus aureus and Streptococcus pyogenic bacteria of the experimental rat Figure 4A and 4B). 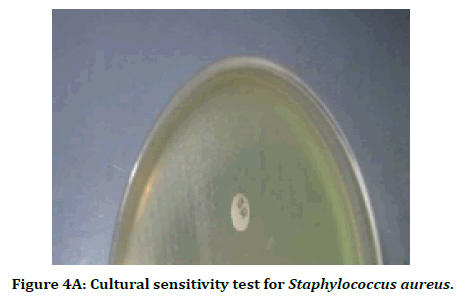 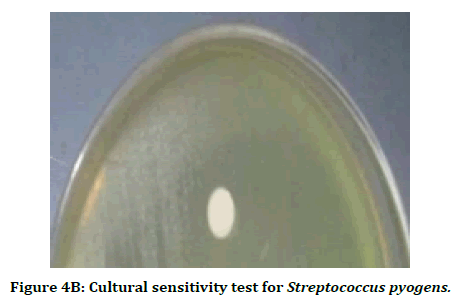 The present investigation pronounced there is no antimicrobial activity observed against two bacterial strains (i.e. Staphylococcus aureus and Streptococcus pyogens). The presence of methanol fractions of Perna Viridis gill extracted Antimicrobial peptide activity has not shown any efficacy against both bacterial strains. Debora Or, et.al. and Ali Adem Baha, et.al. studies and some of the research studies show Perna Viridis gill extraction shows antibacterial activity with a maximum zone of inhibition was reported against Staphylococcus aureus and Staphylococcus epidermis [24,25]. But in our study, we have included staphylococcus aureus and Streptococcus pyogenes, among these bacteria minimum growth of inhibition, was not observed. Chandran et al. [8] studies shown that the maximum antifungal activity was observed against Aspergillums flavus [8], but we have not included this species in our experiment. Christopher lack rock, et.al. studies shown that antimicrobial peptides did not show any zone of inhibition, as well as this experiment, also did not show any zone of inhibition in staphylococcus pyogens by Antimicrobial peptides activity. Hence the marine-derived antimicrobial peptides did not show any efficacy towards anatomical abnormalities caused by induced infections.

In the olden days, AMP has also been called cationic host defence peptides/anionic protein. AMP's are oligopeptides which are varying with thousands of amino acids. Amp's are the broadspectrum antibiotics that are demonstrated as a therapeutic agent. Amp's have been demonstrated to kill both gram-negative bacteria and gram-positive bacteria and enveloped virus, fungi, etc. In our study, antimicrobial peptides are used to treat anatomical abnormalities caused by induced infection Staphylococcus aureus and Streptococcus pyogens. Anatomical abnormalities were observed, the clinical observation was done for symptoms, microbiological analysis to confirm the presence of a pathogen(s) which was (were) not present before the induction, and histological changes. However, antimicrobial peptides were not shown any efficacy against both bacterial strains.

We are planning for improving active antimicrobial drugs by using sea sources like a marine –organisms like Mollusca.

This publication was supported by the Deanship of Scientific Research at Prince Sattam bin Abdulaziz University, Alkharj, Saudi Arabia.

All authors contributed equally to this work, and they have read and agreed to the final manuscript.

Notes on the Contributors

Mohammed Hamid Karrar Alsharif B.Sc., M.Sc. Anatomy, Histology and Embryology specialist. In addition to his academic experience in teaching Human Anatomy, Histology, and Embryology in Saudi Arabia and many Sudanese Universities for more than 11 years. As well as his ongoing research fellowship position at the Department of Histology and Embryology, Faculty of Medicine, Ondokuz Mayis University, Turkey, he used to pursue studies on peripheral nerve regeneration; besides that, he is a Ph.D. candidate in Clinical Anatomy at Department of Anatomy, National University, Sudan. In addition, the author has publications reached over 15, especially in the Human Anatomy variant, medical education, and Radiographic Anatomy, besides much other ongoing research.

Abubaker Yousif Abdalla Elamin B.Sc., M.Sc. Anatomy, Histology and Embryology specialist. He is also a member of quality assurance and scientific research committee in his current position. As an anatomist, he has good academic experience in teaching Human Anatomy, Histology, and Embryology as he worked in many Sudanese and Saudi’s Universities. He is currently doing Ph.D. in Human Anatomy as well as Histology and Embryology. He is pursuing the field of stem cells therapy in neurodegenerative diseases. He has over ten years of academic experience and many published works.

Juman Mahmoud Almasaad B.Sc., M.Sc. anatomist and embryologist and a former member of the National Commission for Academic Accreditation & Assessment committee in different Saudi’s Universities. Ms. Almasaad has good academic and administrative experience. She was involved in the mentoring and Academic Counseling program. As she also experiences in teaching Anatomy, Histology, and Embryology, she worked in many universities in Sudan, Jorden, and Saudi Arabia. She has many published works related to human Anatomy besides her ongoing researches in anatomy education, peripheral nerve regeneration, and anatomical variants.