Results: A total of 38 subjects were included in this study. Mean age of the subject was 34.7 years. Majority of subjects were females. Most common site of the lesion was arm. Majority of lesions had conventional morphology. No malignant granular cell tumors were identified. The lesions were positive for S-100.

Granular cell tumor is a rare tumor, which is mostly benign and can affect any organ in the body. It most commonly occurs in skin and soft tissue. Other organs commonly affected are tongue and breast and have very rarely been reported in the digestive and respiratory tracts, heart, pelvis, bladder and vulva. It can occur in both sexes, although a female predisposition is more common. Clinical presentation is variable and often depends on the location of the lesion. These lesions usually present as a skin coloured or reddish, solitary, non-tender, slow growing nodules. Many cases are detected incidentally. In visceral organs, these tumors can cause symptoms due to pressure effects on vital organs. Clinically granular cell tumors mimic neurofibroma, schwannoma, fibromas and lipomas.

Granular cell tumors were initially thought to have a muscular origin. These tumors are proposed to be originating from the Schwann cells. The typical histo-morphological features are diagnostic and when required can be supplemented with immunohistochemical markers. Majority of these tumors are positive for S-100. Many syndromic associations have been proposed, which includes Noonan’s syndrome and LEOPARD syndrome, PTEN hamartoma tumor syndrome and type 1 neurofibromatosis. A small subset of S-100 negative granular cell tumors (non-neural dermal granular cell tumors) have been identified and were found to harbour mutation in ALK fusion gene. However they are found to be consistently positive for NK1-C3 and are usually found to have a better prognosis.

Majority of granular cell tumors are benign and do not recur, unless excision is incomplete. Malignant granular cell tumors, however have a poor prognosis, has propensity for distant metastasis and is associated with reduced survival. Large tumor size, deep soft tissue location, necrosis, and distant metastasis are features commonly seen with its malignant counterpart.

The significance of identifying these tumors is that they can mimic cutaneous and mucosal malignancies. Moreover, identification of malignant granular cell tumors is very important. Hence proper diagnosis of the lesion using histopathology and immunohistochemical techniques is essential for identifying the malignant granular cell tumors and for excluding other mimickers of these lesions.

To describe the clinical and histo-morphological patterns of granular cell tumors.

LThis was a retrospective study done in the Department of Pathology, Govt. Medical College, Kozhikode during the time period of Jan 2013 to May 2017. Convenient sampling was employed and the study subjects included all patients diagnosed as granular cell tumor in the Department of Pathology during this time period. All the cases in which slides or blocks could not be retrieved were excluded from the study.

The case sheets and slides of all diagnosed patients were retrieved. Formalin fixed paraffin embedded blocks were studied and Hematoxylin & Eosin staining were done for the study. The cases were studied for age, sex, site of lesion, duration of lesion, size of tumor, invasion, mitosis, necrosis and atypical nuclear features. IHC staining for S100 was done for confirmation. 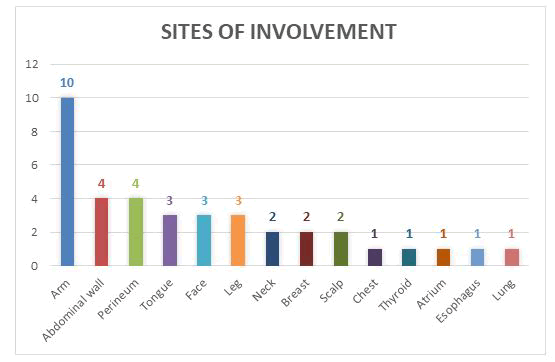 The histopathological features including mitotic activity, necrosis, invasion into adjacent normal structures and peritumoral lymphocytic infiltration are summarized in Table 1. Higher mitotic activity were seen only in 3 cases (7.9%) and all cases were females. 22 subjects (57.8%) had invasion into adjacent normal structures. Of these, 17 subjects (77%) were females. Necrosis was seen only in 2 cases (5.3%). The morphological features of the tumor cells were studied and is tabulated in Table 2. Predominant lesions (92%) had polygonal cells with typical eosinophilic granular cytoplasm and round nuclei (Fig 2 & 3). 3 subjects (8%) had a spindle cell morphology. These tumours showed PAS positive diastase resistant granules in the cytoplasm. Majority of cases showed only mild to moderate nuclear atypia. Severe cytological and nuclear atypia were not observed. Majority of tumors (65.8%) had hyperchromatic nuclei with no nucleoli. Others had vesicular nuclei with small to distinct nucleoli. Prominent nucleoli were not seen in any tumor. The tumors were positive for S100 by IHC (Fig-4). No lesions showed perineural or vascular invasion. Pseudoepitheliomatous hyperplasia was not seen. Each case was assessed for features of malignancy and was scored from 0-6 according to Fanburg- Smith criteria. 8 cases had a score of 2, 8 had a score of 1 and 22 cases had a score of 0. The score was studied for any association with size of the tumor. It was found that there was no significant linear association between size and malignant features (Fig-5) and correlation coefficient (r) =0.16 was obtained. No cases had sufficient findings to be classified as malignant granular cell tumor. 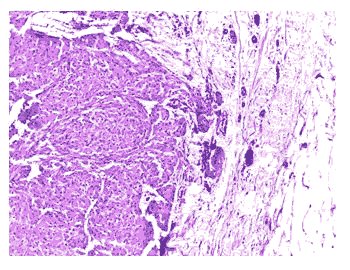 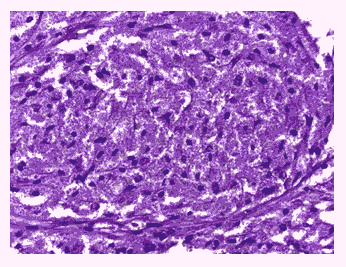 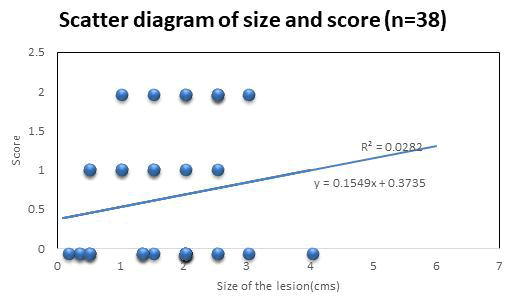 Granular cell tumors are very rare tumors and account for 0.5 % of all soft tissue tumors. These lesions were previously referred to as Abrikossof tumor and granular cell myofibroblastoma. They were initially believed to have a smooth muscle origin. However, immunohistochemical tests and ultrastructural studies have pointed to their origin from Schwann cells.

Granular cell tumors can occur anywhere in the body, but are most commonly seen in head and neck7, chest wall and arms. It is proposed that the higher frequency of these tumors in skin and tongue is due to the high concentration of peripheral nerves in these sites. The most common site of involvement in this study was arms (26.3%), followed by abdominal wall (10.5%), perineum (10.5%), tongue (7.9%) and face (7.9%). These tumors often present as painless slow growing nodules and are mostly seen in the subcutaneous tissue, sub-mucosal region or in deep soft tissues. They are usually asymptomatic,but can present with pressure effects on vital organs like bronchus and esophagus. They can also present as painful and pruritic plaque or nodule. The visceral tumors can also produce symptoms like hematuria and bleeding per rectum.

Several studies have shown that these tumors were found to be more common in females9. However, studies done by An et al had shown male predominance in a study on 98 cases of granular cell tumors in GIT10. Singhi et al had demonstrated an equal distribution of cases in a study on colorectal granular cell tumors involving 26 subjects. In this study, two-thirds of the subjects were females.

Benign granular cell tumors are usually small and have a size less than 4 cm usually. In the study done by Dupuis et al on 130 cases, the size of the lesions ranged from 0.2 cm to 10 cms. The mean size of the lesion was 1.7 cms in this study, with a maximum size of 4 cms. Deeper lesions are often large and have yellow cut surface. According to Enzinger and Weiss, increased tumor size more than 5 cm is associated with poor prognosis, in addition to history of local recurrence and rapid recent growth.

No multifocal lesions were seen in this study, although in other studies approximately 5 to 16 % showed multiplicity. Multifocality is mainly described in association with a group of conditions termed RASopathies, which include Noonan syndrome, LEOPARD syndrome, Legius syndrome, Costello syndrome and type 1 neurofibromatosis. These genetic conditions are characterised by mutations in gene encoding Ras family proteins, which play pivotal role in cell proliferation and differentiation. Multiple granular cell tumors are usually common in skin and subcutaneous tissue. These may also be seen congenitally and can show a familial predisposition.

Classically granular cell tumors are composed of sheets, nests and cords of tumor cells separated by fibrous tissue. The tumor cells are mostly polygonal or rarely spindle in shape and have abundant granular eosinophilic cytoplasm and uniform hyperchromatic nuclei. Many tumors are also found to have large cytoplasmic granules surrounded by a clear halo and are named as Pustulo- ovoid bodies of Milian. Granularity of cytoplasm is due to accumulation of secondary lysosomes. The granules are PAS positive and diastase resistant.

As granular cell tumors are originated from Schwann cells, they are usually positive for S-100, vimentin, NSE and CD 68. They usually have low proliferative index, with Mib staining seen in <3%15. Proliferative markers like Ki67 and PHH3 were found to be a reliable predictors of atypical histology in some studies. Electron microscopy of granular cell tumors show intracytoplasmic dense membrane bound lysosomes.

A subset of granular cell tumors is negative for S-100 and is designated as non-neural granular cell tumors. These lesions are usually polypoid and are located in deep dermis. They lack pseudoepitheliomatous hyperplasia and often show attenuated ulcerated overlying epidermis. They are composed of spindle cells, round or polygonal cells with abundant granular cytoplasm. These lesions show cytologic atypia and increased mitotic activity.These tumors often show weak focal positivity for CD 68. The only consistent marker marker seen in this subset is NK1-C3 (CD 63)16. These lesions are usually indolent and have a good prognosis. Local recurrence can be seen and thus require complete excision. Some of these lesions were found to harbour a mutation in ALK fusion gene and so shows positivity for ALK by immunohistochemical techniques.

15% of cases had tumor infiltrating lymphocytes, which indicates an immune response to tumor. This is lower than similar studies done by Stemm et al, who demonstrated tumor infiltrating lymphocytes in 35.3 % of cases. Lymphoid infiltrate were small, well circumscribed and had no germinal centre. No lesions showed perineural or vascular invasion. These can be seen even in benign granular cell tumors and have no impact in prognosis.

In visceral organs, granular cell tumors can present as solid masses with infiltrative margins and ulcerated or thickened overlying mucosa and can masquerade as malignant neoplasms. The visceral lesions can also have a verrucous appearance due to pseudoepitheliomatous hyperplasia.

Benign granular cell tumors are treated by excision with a negative margin status. These usually donot recur, if the margins are negative. They also will not show lymph node or distant metastasis. Malignant granular cell tumors require wide local excision. Chemotherapy and or radiotherapy are often given for these cases. They usually have an aggressive course and a reduced overall survival.